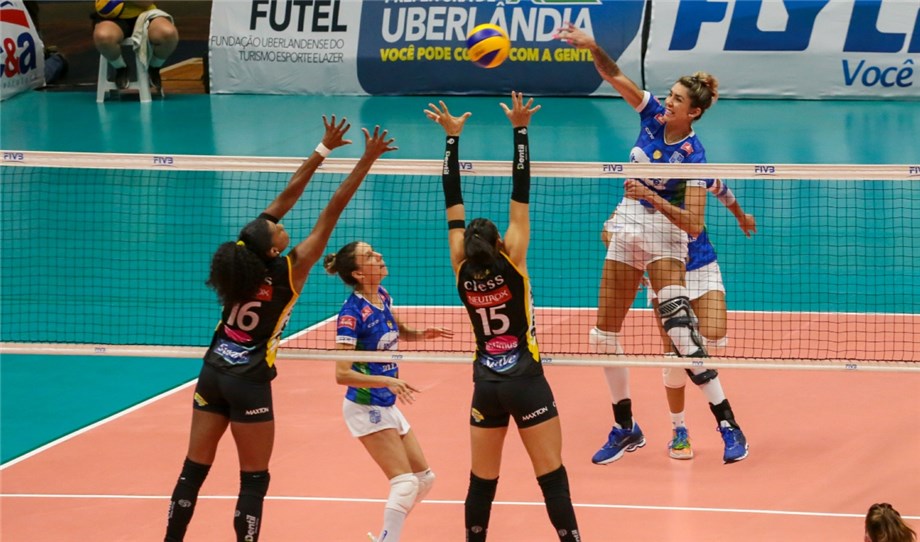 Thaisa jumps to score a point against Dentil Praia Clube

Uberlândia, Brazil, February 22, 2020 – Itambé Minas secured their third-straight Women’s Club South American Championship title on Friday as the Brazilian side counted on a dominant performance of star middle blocker Thaisa Menezes to best in-state rivals Dentil Praia Clube in straight sets 3-0 (25-22, 27-25, 25-16) at the Sabiazinho Arena, in Uberlândia, Brazil.
Awarded as the Most Outstanding Player of the tournament, the 32-year-old Thaisa, a two-time Olympic champion with the Brazilian national team, dominated the net and led Itambé Minas to the title with a blocking point that sealed the team’s win. 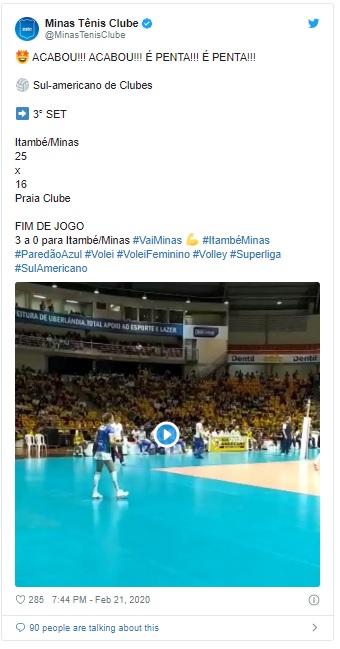 Thaisa was a staple for Brazil between 2007 and 2018, when she declined a call-up as she wanted to focus on her club career. The middle blocker has been one of the best players in the Brazilian Superliga and could put her back in the plans of head coach José Roberto Guimarães for the 2020 international season, which includes the Tokyo Olympics.
It was the fifth South American title won by Itambé Minas and the third in a row as the team had also prevailed in the 2018 and 2019 editions. Their other victories happened in 1999 and 2000. In 2020, the Brazilian club won all its four matches in Uberlândia in straight sets.
It was the seventh meeting between the Minas Gerais rivals in the season and just the second victory for Itambé Minas. The first one happened at the 2019 FIVB Women’s Club World Championships, in Shaoxing, China, in the fifth-place match.
“We work very hard to win tournaments so when we take one home, it makes us very happy,” Thaisa said after the match. “Being against Praia Clube doesn’t make it more special. I think we all played really well tonight, every one gave the best for each point and our game just flowed.”
The tournament’s Dream Team featured setter Macris Carneiro (Itambé Minas), opposite Brayelin Martínez (Dentil Praia Clube), outside hitters Dobriana Rabadzhieva (Itambé Minas) and Daniela Bulaich (San Lorenzo), middle blockers Carol Gattaz (Itambé Minas) and Ana Carolina da Silva (Dentil Praia Clube) and libero Léia Nicolosi (Itambé Minas).
Argentina’s San Lorenzo finished third in Uberlândia with two wins in their four matches.
More volleyball from Brazil:
Cachopa guides Sada Cruzeiro to seventh South American title
Martínez keeps Praia Clube at the top of the Brazilian Superliga
Zé Roberto expects challenging start for Brazil at Tokyo 2020
Thaisa back in top form with Itambé Minas
Quick links:
FIVB.com - Volleyball
Facebook
Twitter
Instagram
Youtube