The McNamaras are enjoying their World Tour transition 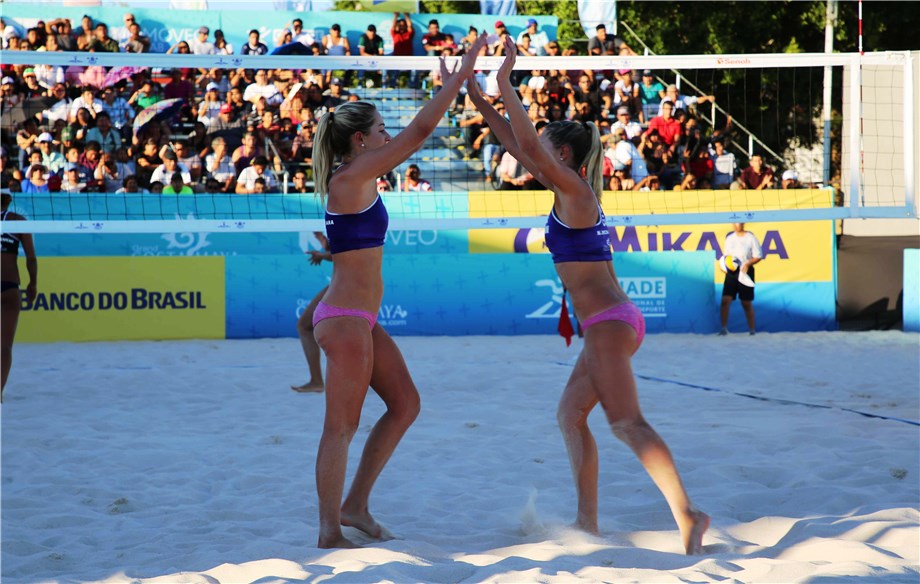 Chetumal, Mexico, October 27, 2018 – After finishing a solid youth career, Nicole and Megan McNamara have tested new waters in 2018 as the Canadian twins played for the first time in the FIVB Beach Volleyball World Tour.
The 21-year-old players, who claimed a silver medal at the 2014 Youth Olympics and bronze at U-19 and U-21 World Championships in 2014 and 2016, are closing their first international calendar year this week at the Chetumal Open, where they are set to play in the quarterfinals.
Megan and Nicole played in six events this year and they did well in most of them, including a semifinal appearance in the one-star event in Bangkok in May and a top-5 finish in the three-star Tokyo tournament in July.
“It was a lot of ups and downs,” Megan explained. “It’s a whole different game from the one we are used to. It’s a huge step from the age-group tournaments we had played before and we really had to push ourselves, we learned a lot and we’re excited for the years that will come. We tried to find our best and not be a team that we are not.”
The twins’ insertion into the international scene, however, happens in a moment when Canada is one of the stronger forces in the women’s game with the teams of Heather Bansley/Brandie Wilkerson and Sarah Pavan/Melissa Humana-Paredes both standing among the best in the planet.
Their compatriots’ success is a source of inspiration for the McNamaras, but it is also a hurdle when competing for automatic main draw berth for their team.
“It makes it tougher for us, but it’s also great for the programme,” Megan added. “It’s really inspiring for us growing up and watching these older girls play and knowing that our national team is doing so well. It’s becoming more recognized as a sport in Canada and that’s a great thing for Canadian beach volleyball.”
Before they complete their full transition to the World Tour, however, there is something they still want to accomplish. Stars for the UCLA college programme that won the American National Championship earlier this year, Megan and Nicole want to do it again in 2019.
“We still have one more year of college ahead of us and after that we’ll be playing internationally full-time,” Nicole said. “But before that we want to win the National Championship with the UCLA one more time.”
Quick links - Beach volleyball:FIVB Beach Volleyball World Tour - LjubljanaFIVB.com - Beach volleyballLatest VideosFacebookTwitterInstagram