The ‘other’ Vikings look for their next steps 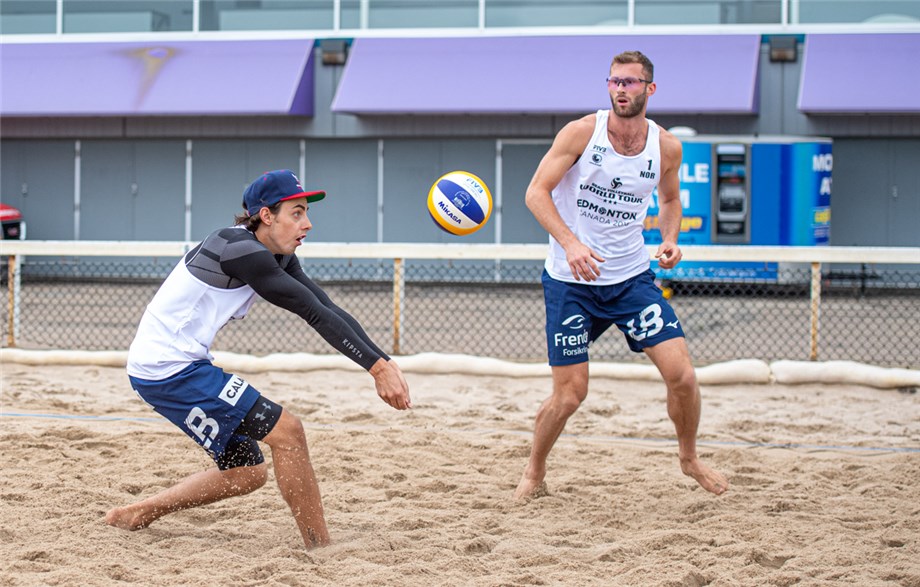 Edmonton, Canada, July 18, 2019 – The Beach Volley Vikings have become pretty popular faces in the sport over the last year thanks to the massive success of one of its halves, the one of Norway’s Anders Mol and Christian Sørum. But the other part of the team, formed by Hendrik Mol and Mathias Berntsen, is also looking for its spot among the beach volleyball elite.
Quick links - Beach volleyball:
FIVB World Tour - Edmonton, Canada
FIVB.com - Beach volleyballFacebookTwitterInstagram
The 25-year-old Mol and the 23-year-old Berntsen have started their partnership in 2018 and even if they are yet to get impressive results as their famous training partners, they got to witness first-hand each step of Anders and Christian on their way to win nine international gold medals of the course of the last 13 months.
“It’s really inspiring,” Hendrik commented. “More than anything, it shows that you can get that extra leap if you have enough confidence. That’s their main thing right now, they’ve always been very good players but once they gained that confidence that they could win tournaments, it was crucial for their success.”
“We train with the best team in the world and it probably can’t get any better than that,” Berntsen added. “They push us to our limits every day and we know that if we don’t give our absolute best we’ll be crushed. We are very fortunate to be so close with them.”
After all, beach volleyball is a family business for the Vikings as Hendrik, who’s Anders’ older brother, and Berntsen, who’s their cousin are both part of the family’s beach volleyball nucleus, which also includes Kare and Jetmund Mol as their coaches and Merita Mol as  mental coach.
“It’s great to work with our families and I feel it benefits all of us,” Hendrik added. “It really connects our family in the process and it’s always nice to travel around with those we love.”
Anders/Christian and Hendrik/Mathias might currently be separated by 60 spots and 6,000 points in the Olympic ranking that will determine the qualified teams to the 2020 Games, but the goal for both teams is to be in Tokto next summer.
For Hendrik and Mathias, though, the European Continental Cup, which will have its second and final phases next summer, could be the most likely route.
“It’s kind of a different path, but we’re trying to approach it in the same way,” Berntsen remarked. “We’re playing better in each match and each tournament and we’re getting more and more confidence in our game. The first goal is to become a main draw team. We’re just looking ahead and trying to take advantage of the opportunities we have and see how far we can get.”
Because of that, the Vikings decided to play at the three-star Edmonton Open this week even if they had a four-star tournament closer to home in Espinho. They’re hopeful a good finish in the Canadian event could provide the push they need to give that next step.
“That is the plan,” Berntsen disclosed. “We don’t want to play in a qualifier when we can be in the main draw somewhere else. Also, in a three-star with most of the top teams not being here, we feel we have a better chance of getting a good finish and secure some important points.”