The season-long journey to Rome ends this week 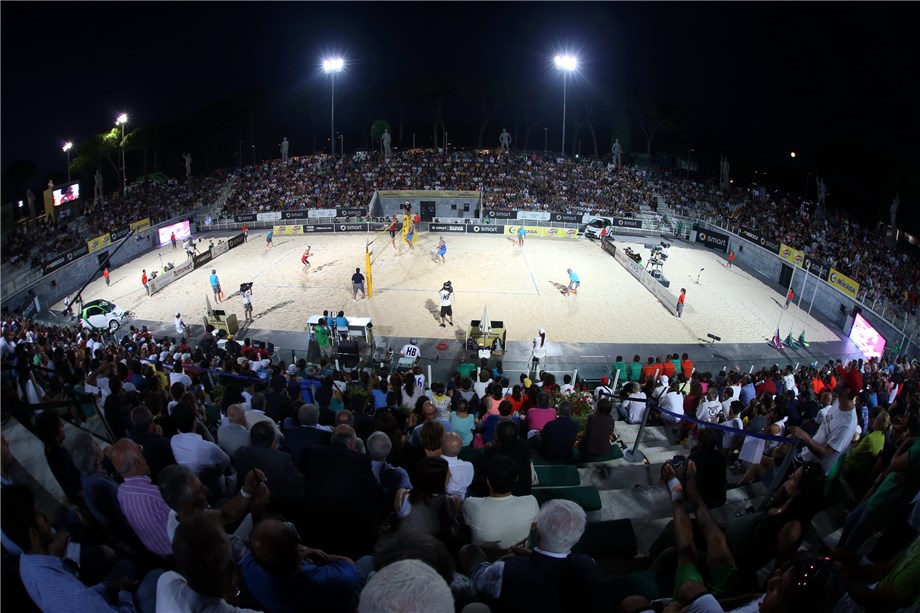 The 2019 FIVB World Tour Finals will featuring night matches at the at the Foro Italico.

Lausanne, Switzerland, September 2, 2019 - After 12-plus months of competition for 94 tournaments at 56 sites in 37 countries, the 2018-2019 international season comes to an end this week in Rome for the $600,000 FIVB Beach Volleyball World Tour Finals.
Quick links - Beach volleyball:
FIVB Beach Volleyball World Tour Finals - Rome
Facebook
Twitter
Instagram
With the World Tour returning to the Italian capital and the Foro Italico for the first-time since June 2013, the 2018-2019 season finale officially begins on Wednesday with qualifying where eight men's and eight women's pairs will advance to the money rounds starting Thursday.
Prior to Wednesday's action, preliminary country quota playoff matches will be staged Tuesday afternoon for teams from Austria, Brazil, Italy and the United States to set the field for the 32-team qualifiers for men and women.
Thursday's schedule features pool play with 32 teams making up eight groups of four per gender. The top three finishers in in pool will advance to Friday schedule featuring 24-team elimination brackets with the group winners netting a bye into the Round of 16.
The men's and women's quarter- and semifinal matches will be played Saturday followed by the podium-placement contests Sunday evening on the Foro Italico center court. The winning teams in each gender will capture the $40,000 first-place prizes and the 1,200 qualifying points per gender towards the Tokyo 2020 Olympic Games.
Two teams that competed in the 2013 Rome title matches at the Foro Italico are in the field for the 2019 FIVB World Tour Finals, including women's gold medal winners Talita Antunes/Taiana Lima of Brazil and men's second-place finishers Aleksandrs Samoilovs/Janis Smedins of Latvia. 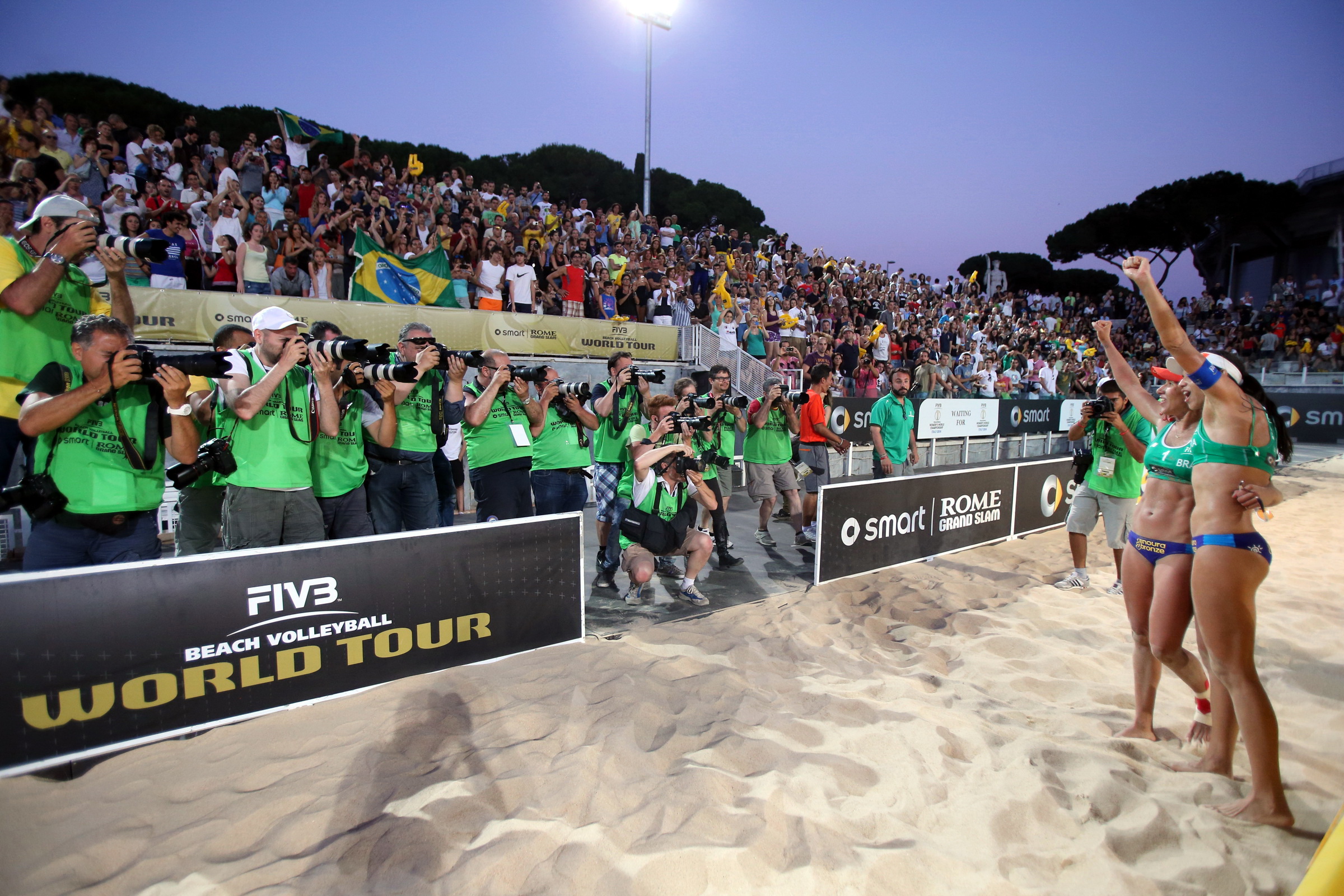 Talita and Taiana posing for the photographers after winning the 2013 Rome Grand Slam
Both pairs must earn a spot in the 2019 FIVB World Tour Finals main draw as Talita and Taiana must defeat compatriots Fernanda Alves/Barbara Seixas in Tuesday's country quota playoffs. If successful on Tuesday, the 2013 champions must win a pair of qualifying matches on Wednesday to advance to Thursday’s schedule.
Samoilovs and Smedins, who have won their last two FIVB events in Russia and Latvia, will start play in the qualifier on Wednesday needing a pair of wins to advance to Thursday's schedule.
Phil Dalhausser and Sean Rosenthal defeated Samoilovs and Smedins in the men's Foro Italico finale while Talita and Taiana posted a gold medal win over April Ross and Jen Kessy. 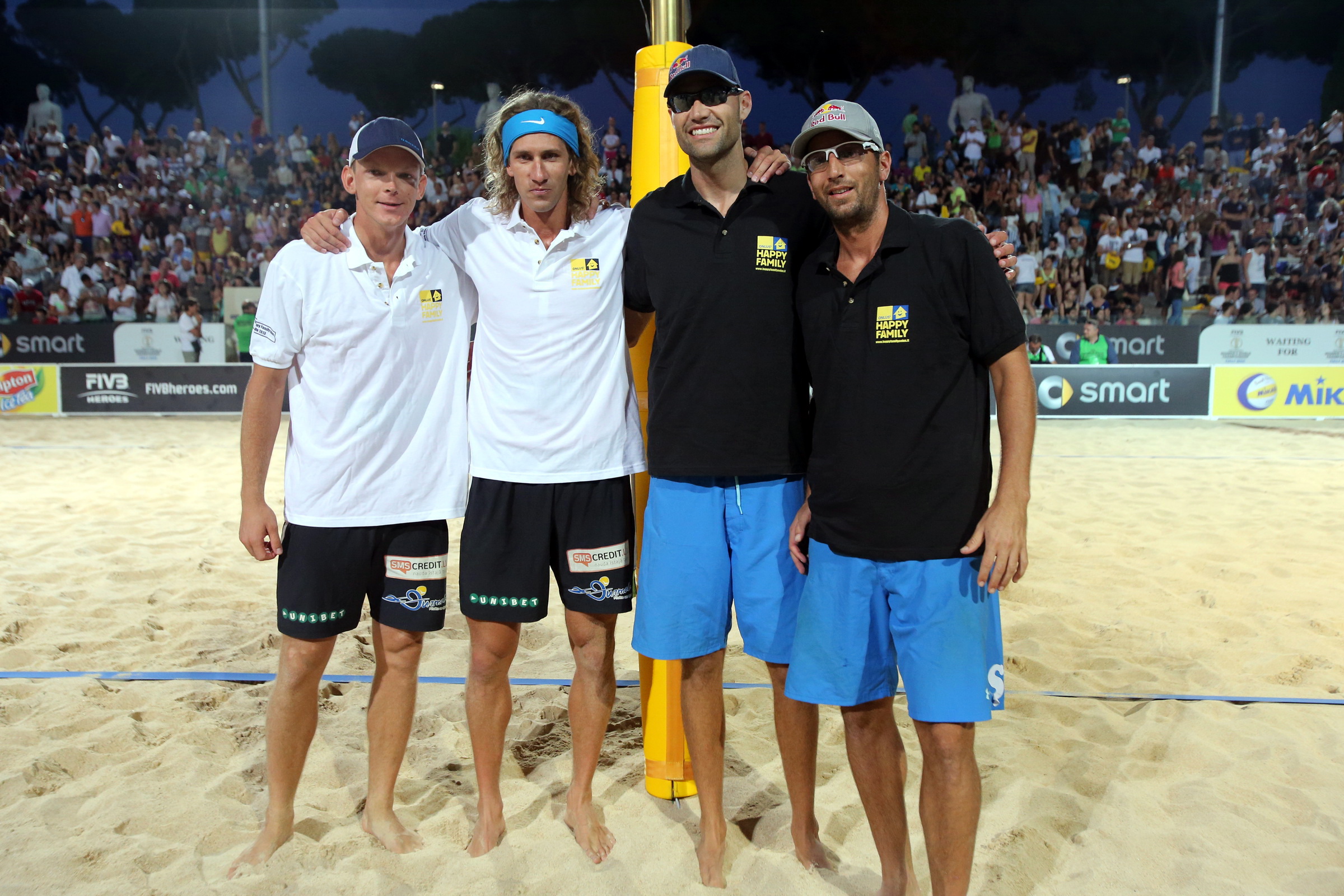 2013 Rome men's finalists (left to right) Janis Smedins, Aleksandrs Samoilovs, Phil Dalhausser and Sean Rosenthal
Dalhausser, who captured his first Rome title in 2010 with Todd Rogers, is playing with Nick Lucena this season. Ross and Alix Klineman are paired together for the 2019 FIVB World Tour Finals and are coached by Kessy.
While the women’s side of the FIVB World Tour schedule did not include an event this past weekend after playing 46 events this season, the men staged their 46th, 47th, and 48th events at tournaments in Oman, France and Norway.
In Salalah, Denmark’s Morten Overgaard/Daniel Thomsen won their country’s first FIVB World Tour gold medal by defeating Ahmed Alhousni/Haitham Alshereiqi from the host country in the finals this past Tuesday in Oman.
Oman - Salalah, August 24-27, $5,000, FIVB men's event No. 455
1. Morten Overgaard/Daniel Thomsen, Denmark, $1,000
2. Ahmed Alhousni/Haitham Alshereiqi, Oman, $700
3. Piotr Ilewicz/Piotr Janiak, Poland, $500
4. Nouh Al-Jalbubi/Mazin Alhashmi, Oman, $400
Gold - Overgaard/Thomsen def. Alhousni/Alshereiqi, 21-23, 21-11, 15-9 (48)
Bronze - Ilewicz/Janiak def.  Al-Jalbubi/Alhashmi, 21-15, 12-21, 15-9 (42) 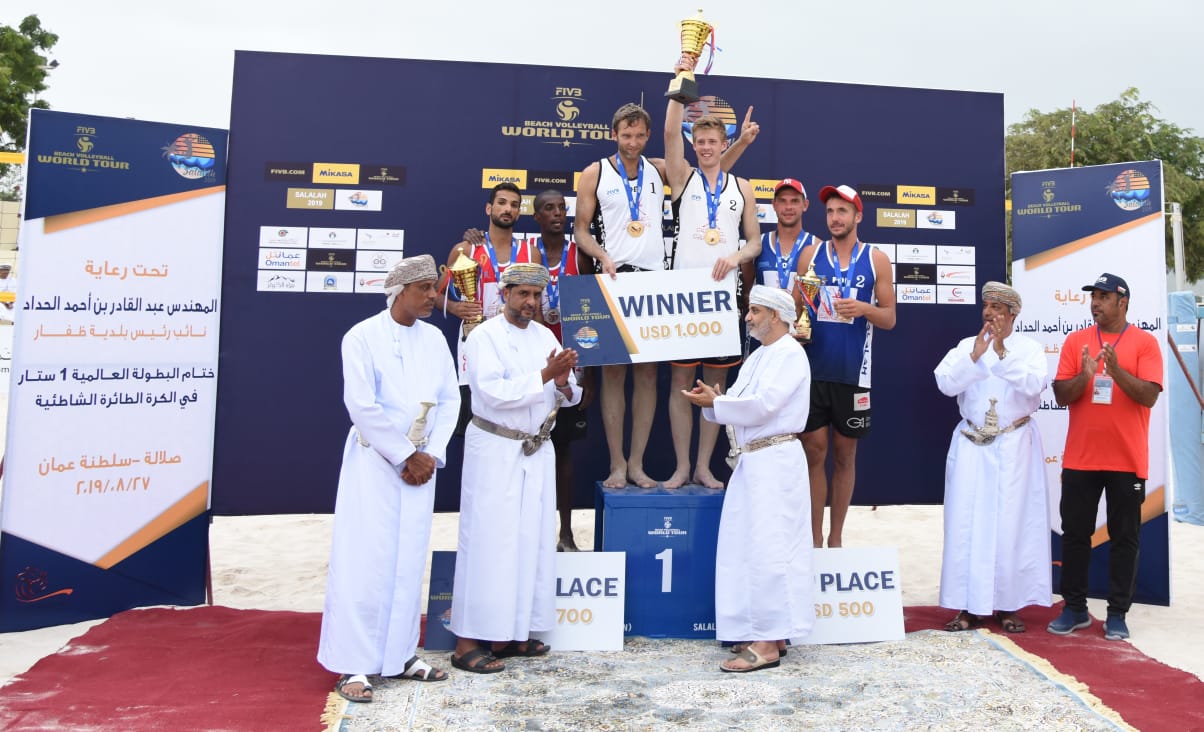 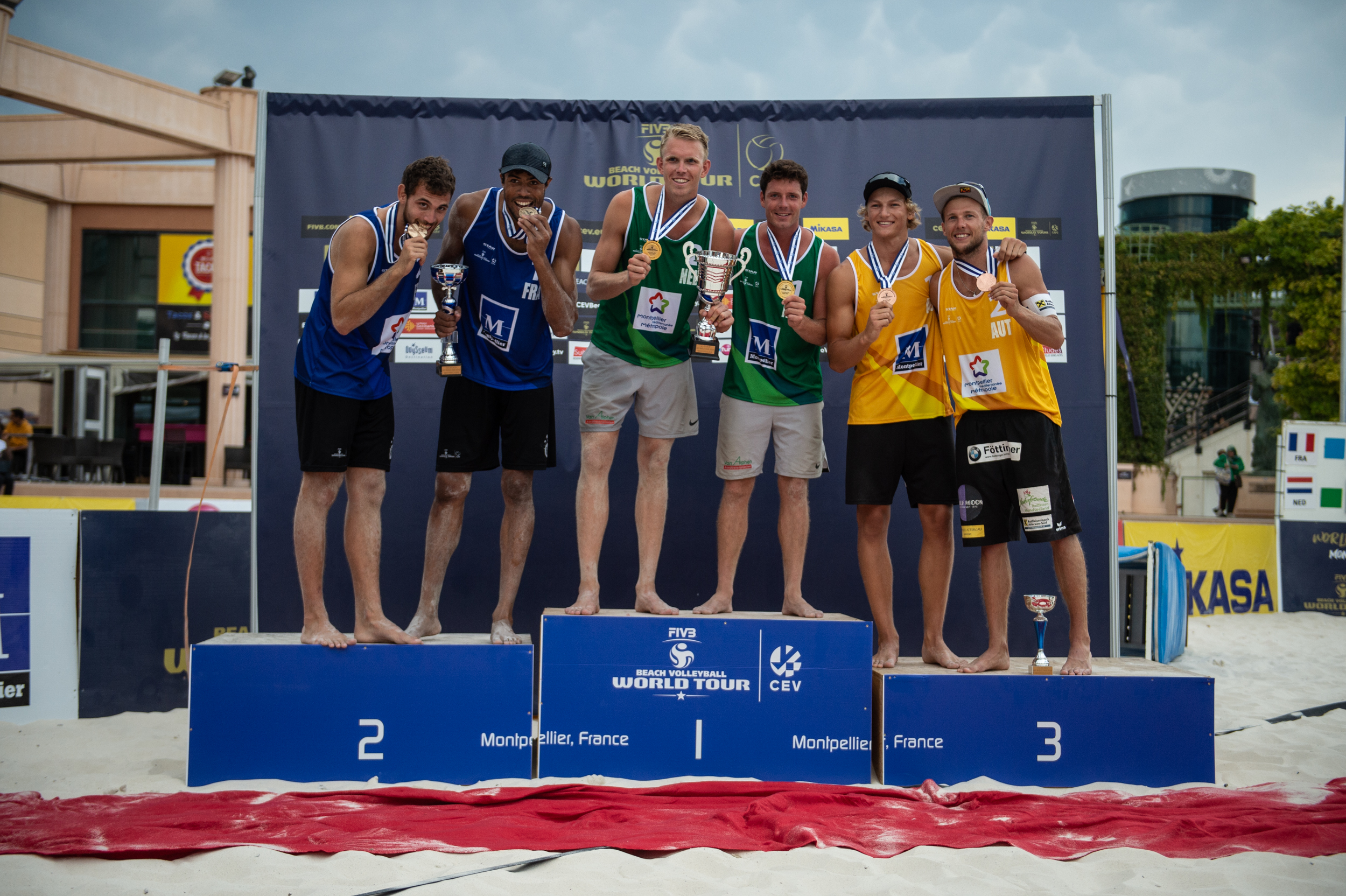 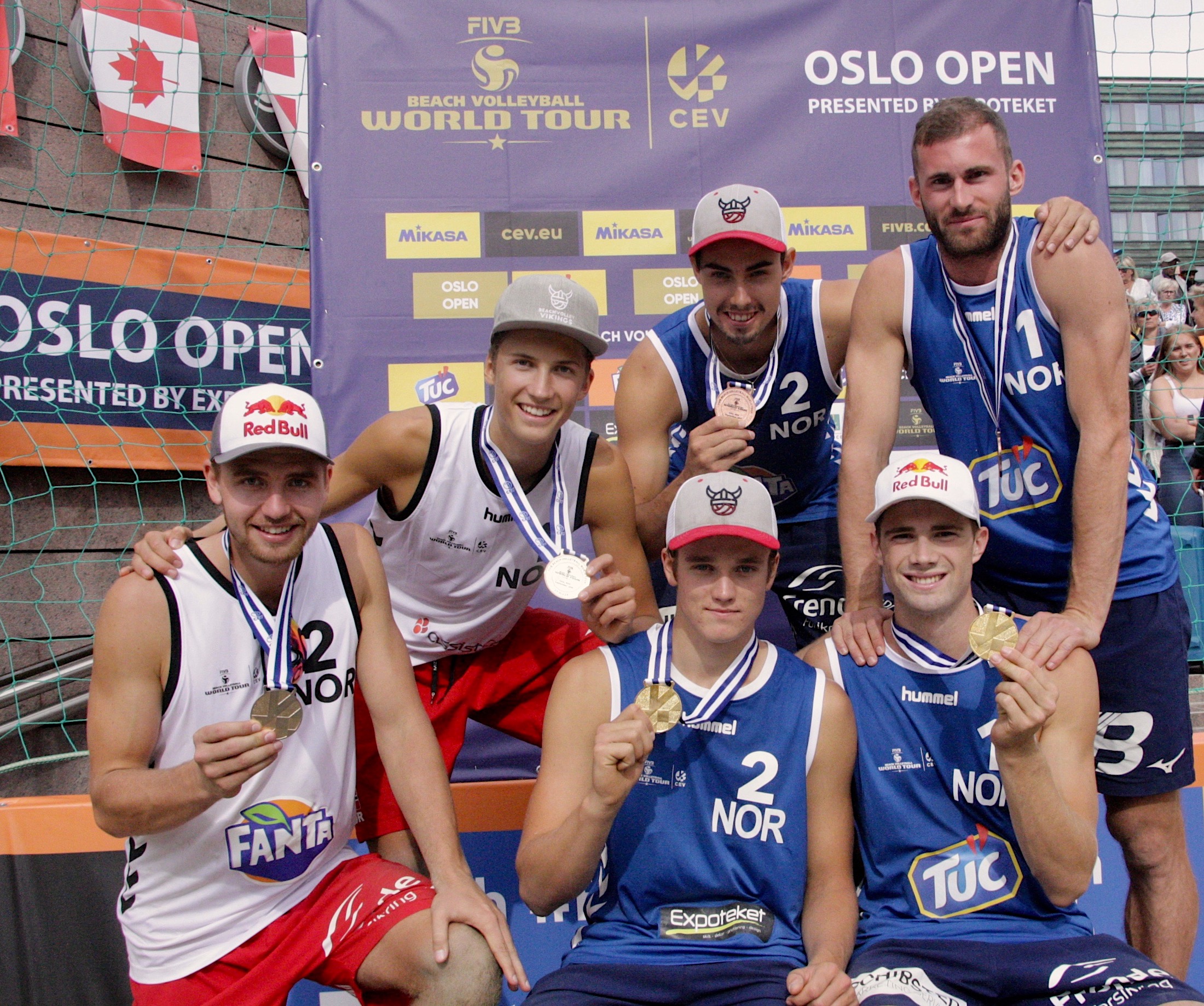 The all-Norwegian podium in Oslo
With the 2018-2019 World Tour season wrapping up in Rome, there will be a 10-day break before an FIVB Olympic qualifying event in China from September 18-22 in Haiyang. The first 2019-2020 event is scheduled for October 1-4 for a men’s-only tournament in Bandar Torkaman, Iran.