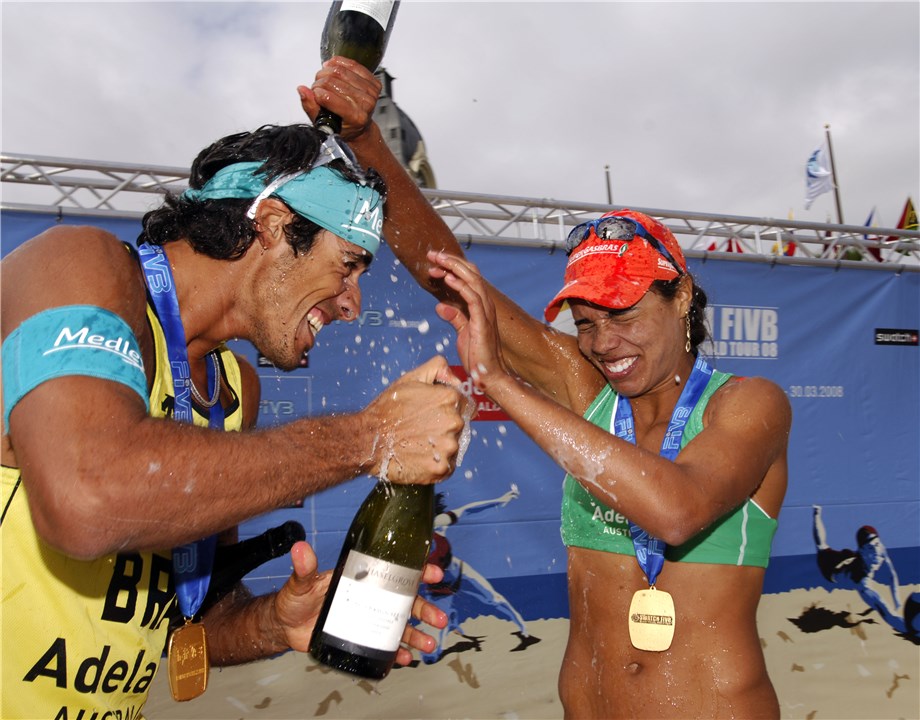 Lausanne, Switzerland, March 29, 2020 - As the world's elite players await the resumption of international beach volleyball competition, here is a look at this week in FIVB Beach Volleyball World Tour history since the start of FIVB-sanctioned events in 1987 for men and 1992 for women.
During the March 29-April 4 time frame, only one World Tour event has been held and it was the Brazilian pairs of Harley Marques/Pedro Solberg and Juliana Felisberta/Larissa Franca who topped the FIVB podiums in Australia on March 30, 2008 in Adelaide.
Juliana and Larissa, the World Tour's all-time leaders in team gold medals with 45 titles together, captured their 21st FIVB crown in the 2008 season opening event by defeating compatriots Talita Antunes/Renata Ribeiro 2-1 (21-13, 18-21, 15-12) in the 57-minute finale.
Harley and Pedro won their fourth of 10 World Tour gold medals in the Adelaide Open by defeating China's Penggen Wu/Linyin Xu 2-0 (23-21, 21-12) in the 46-minute title match on Glenelg Beach. 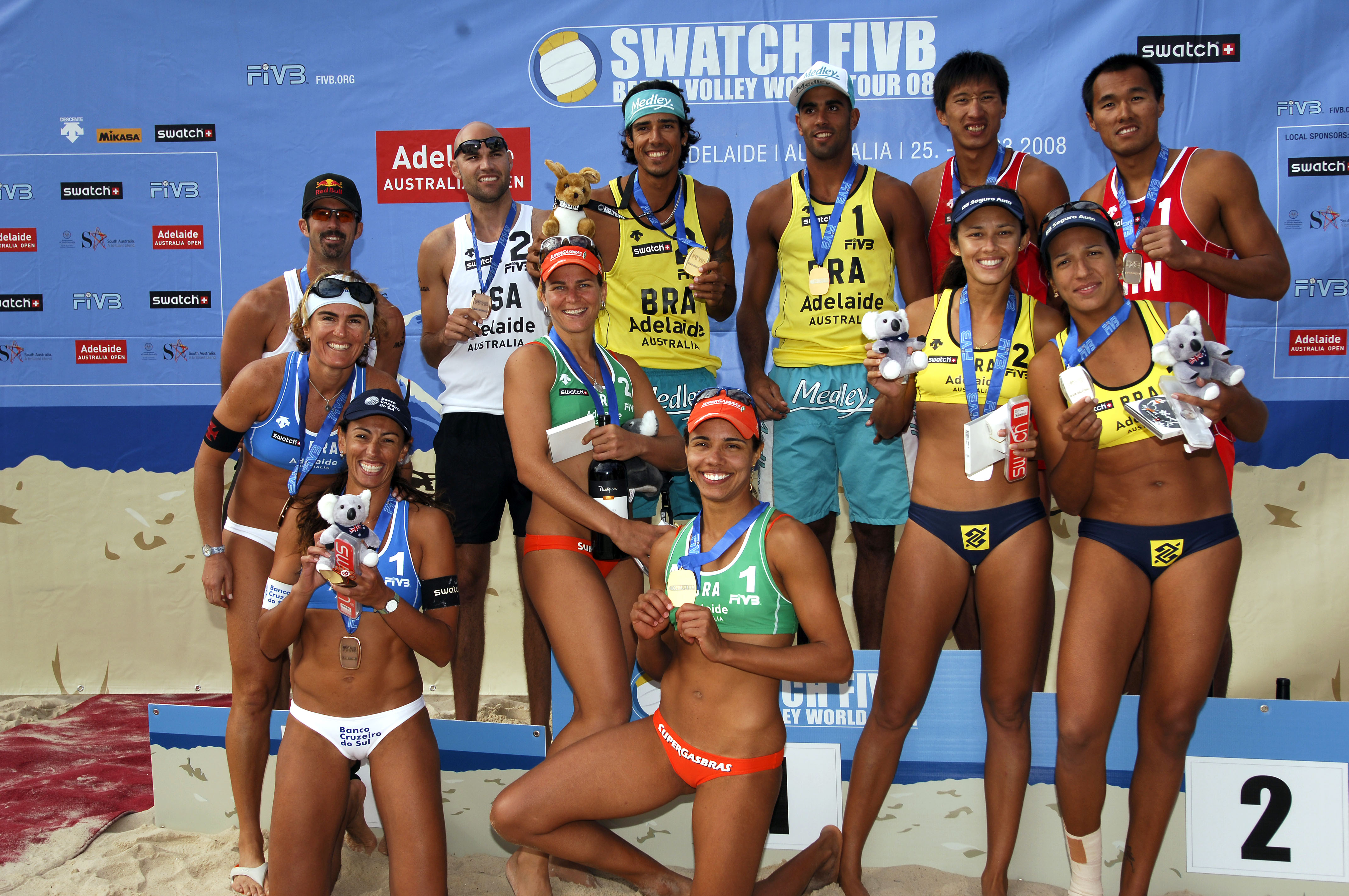 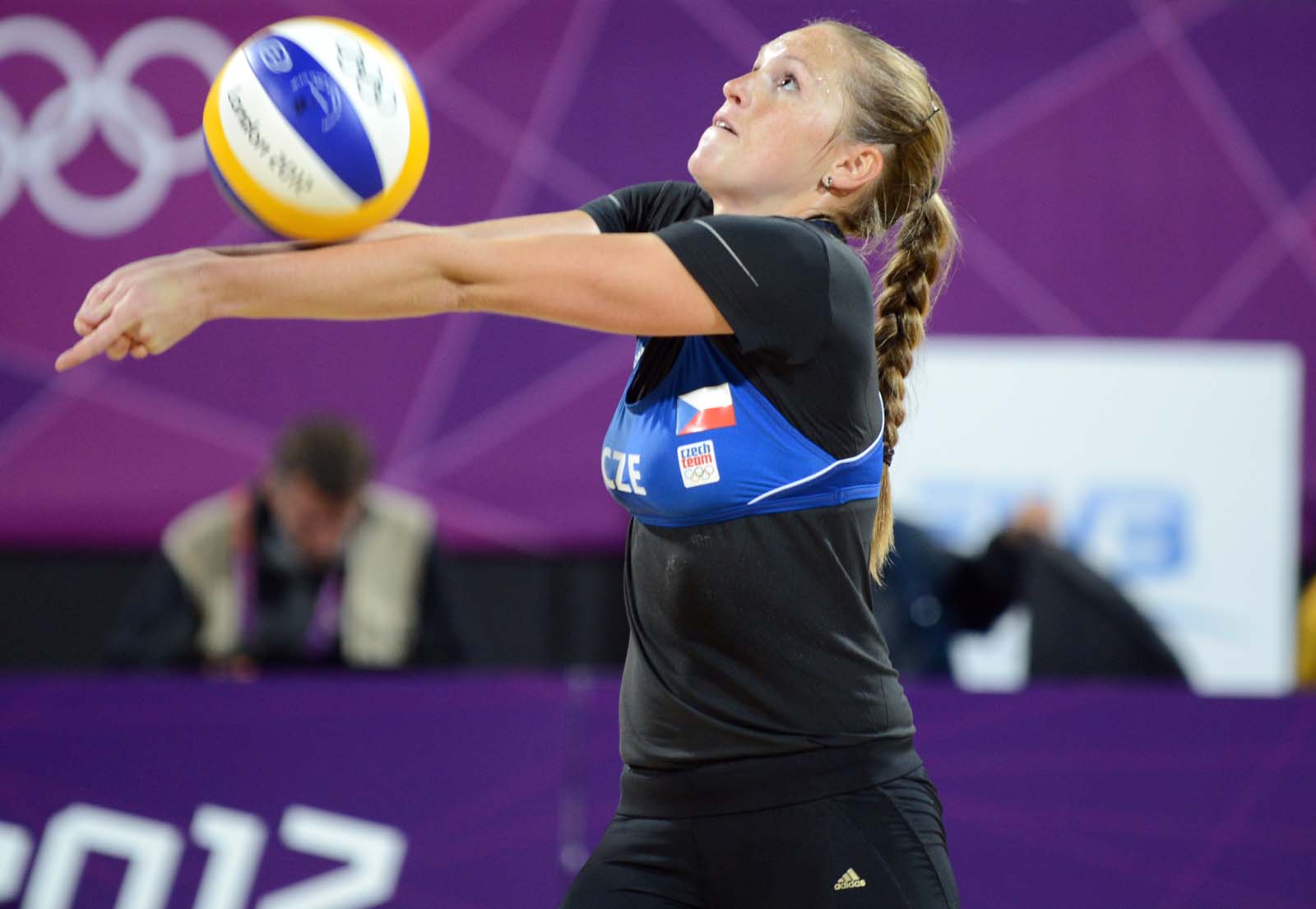 Bumping the Mikasa in the London 2012 quarterfinal match against the United States is Kristyna Kolocova of the Czech Republic
Sanderson posted the best Olympic finish among the birthday quintet as she teamed with the legendary Natalie Cook at the Athens 2004 Summer Games to place fourth after losing the 71-minute bronze medal match against Americans Holly McPeak/Elaine Youngs 2-1 (21-18, 15-21, 15-9). 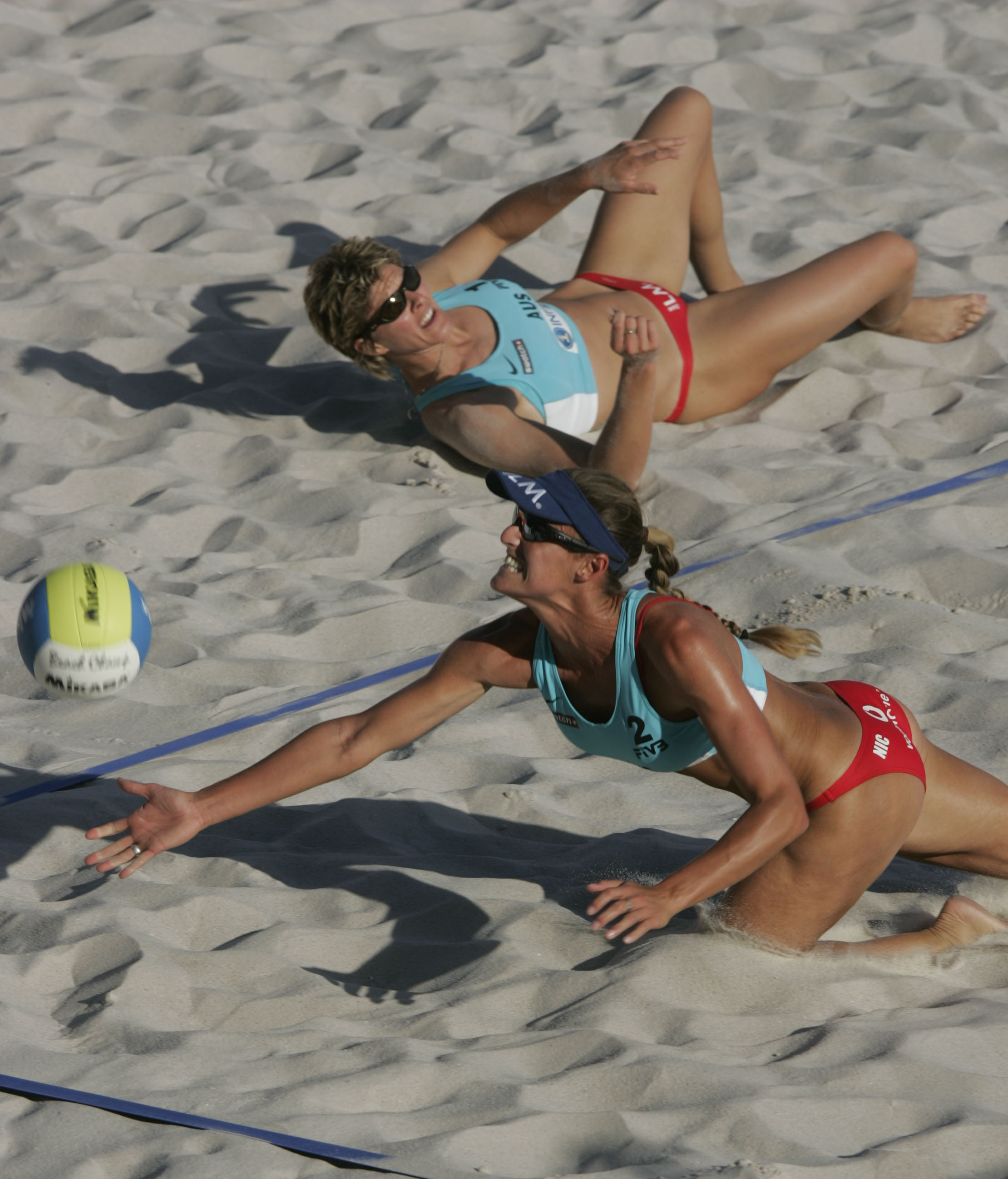 Diving for the ball is Nicole Sanderson as the Sydney 2000 Olympic champion Natalie Cook follows the action.
Lochowicz placed ninth in Athens with Kerri Pottharst as the pair captured their pool with a 3-0 match mark before losing to Sanderson and Cook in the first-round of elimination 2-0 (21-15, 21-16) in 41 minutes.
Leinemann and Schmidt each placed ninth in the Sydney 2000 Olympic Games. Leinemann and Jody Holden split their two matches on Bondi Beach by defeating Americans Rob Heidger/Kevin Wong 17-15 in a side-out scoring contest before being eliminated 15-6 by eventual Sydney bronze medal winners Jorg Ahmann/Axel Hager of Germany. 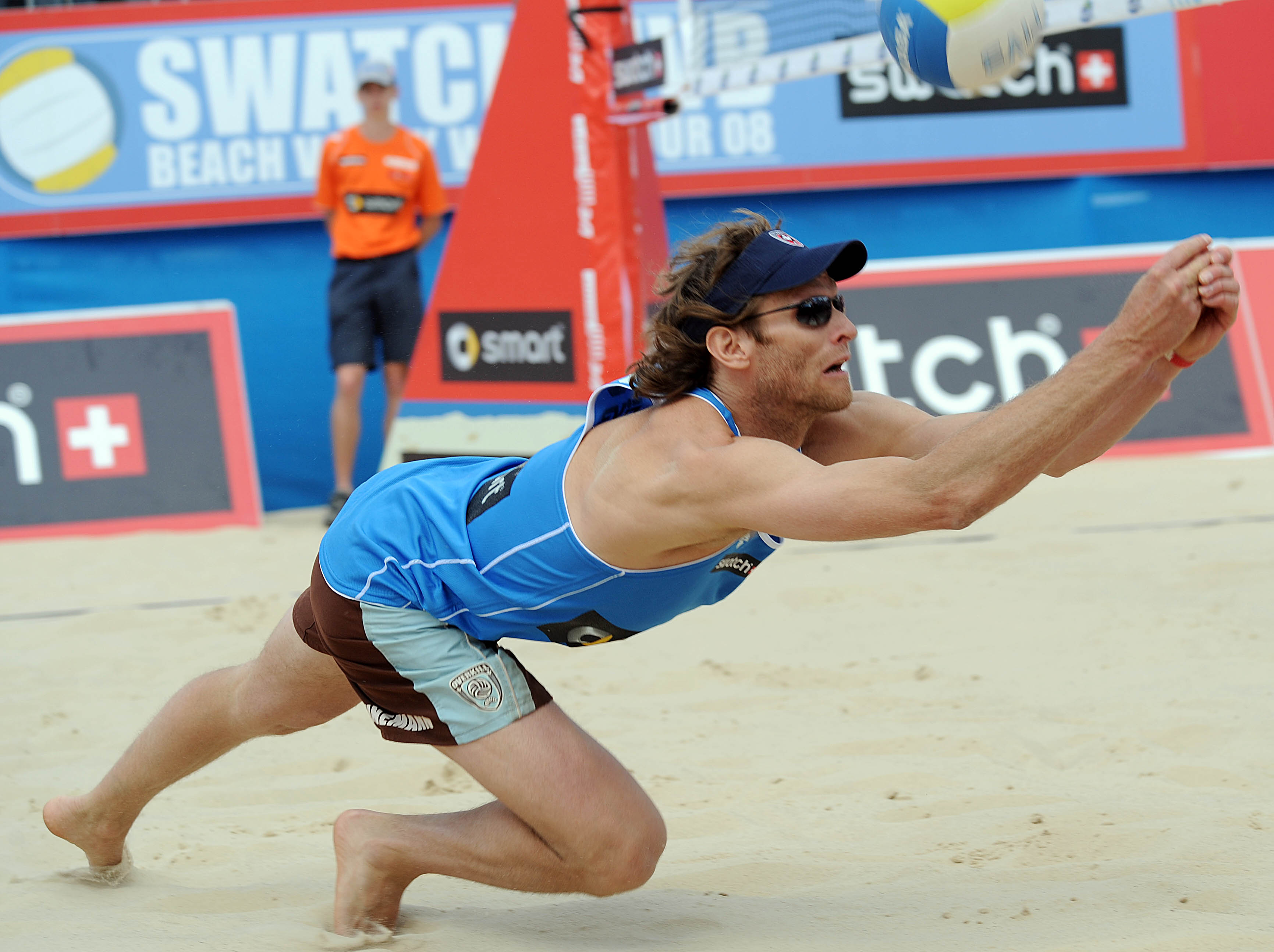 Diving for the Mikasa is Canadian Conrad Leinemann
Schmidt and Gudi Staub also split a pair of matches at the Sydney 2000 Summer Games by defeating China's Jia Tian/Jingkun Zhang 17-15 before being eliminated 15-12 by Italians Laura Bruschini/Annamaria Solazzi.
Kolocova and Marketa Slukova placed fifth at the London Olympics where the Czech Republic pair won three of five matches with both of their setbacks to American tandems that competed in the 2012 Summer Games finale.
After losing to eventual London gold medal winners Misty May-Treanor/Kerri Walsh Jennings 2-0 (21-14, 21-19) in a 36-minute pool play match, Kolocova and Slukova posted a three-set win over Maria Antonelli/Talita Antunes of Brazil in the first-round of elimination before losing 2-0 (25-23, 21-18) in a 49-minute quarterfinal match to Jennifer Kessy/April Ross.