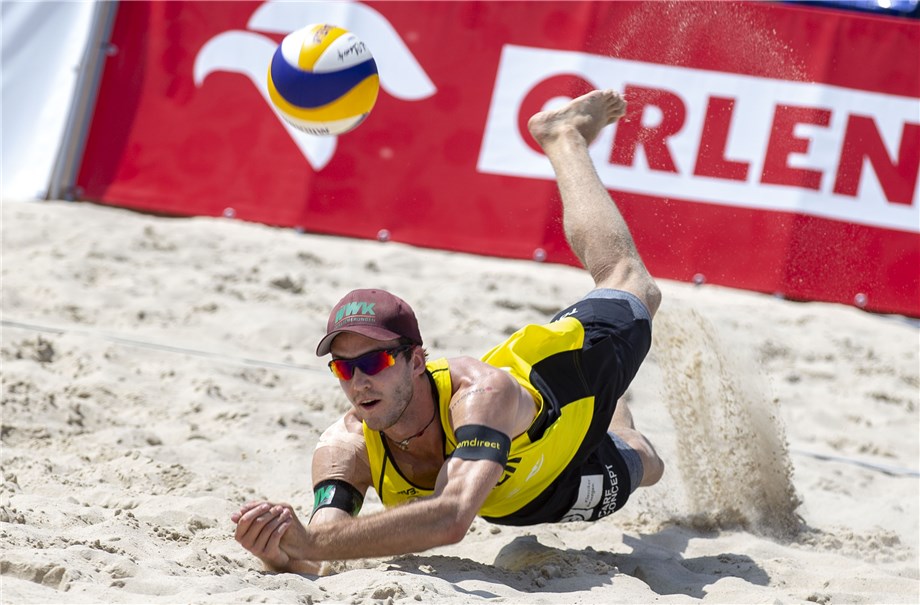 Warsaw, Poland, June 14, 2019 – Julius Thole & Clemens Wickler were the only one of three German teams to make it successfully through the pool stage of the men’s main draw at the four-star Warsaw stop on the FIVB Beach Volleyball World Tour. Not only that, they were among the eight pool winners to advance directly to the second elimination round, skipping the first one, as the last 16 of the tournament shaped up on Friday. 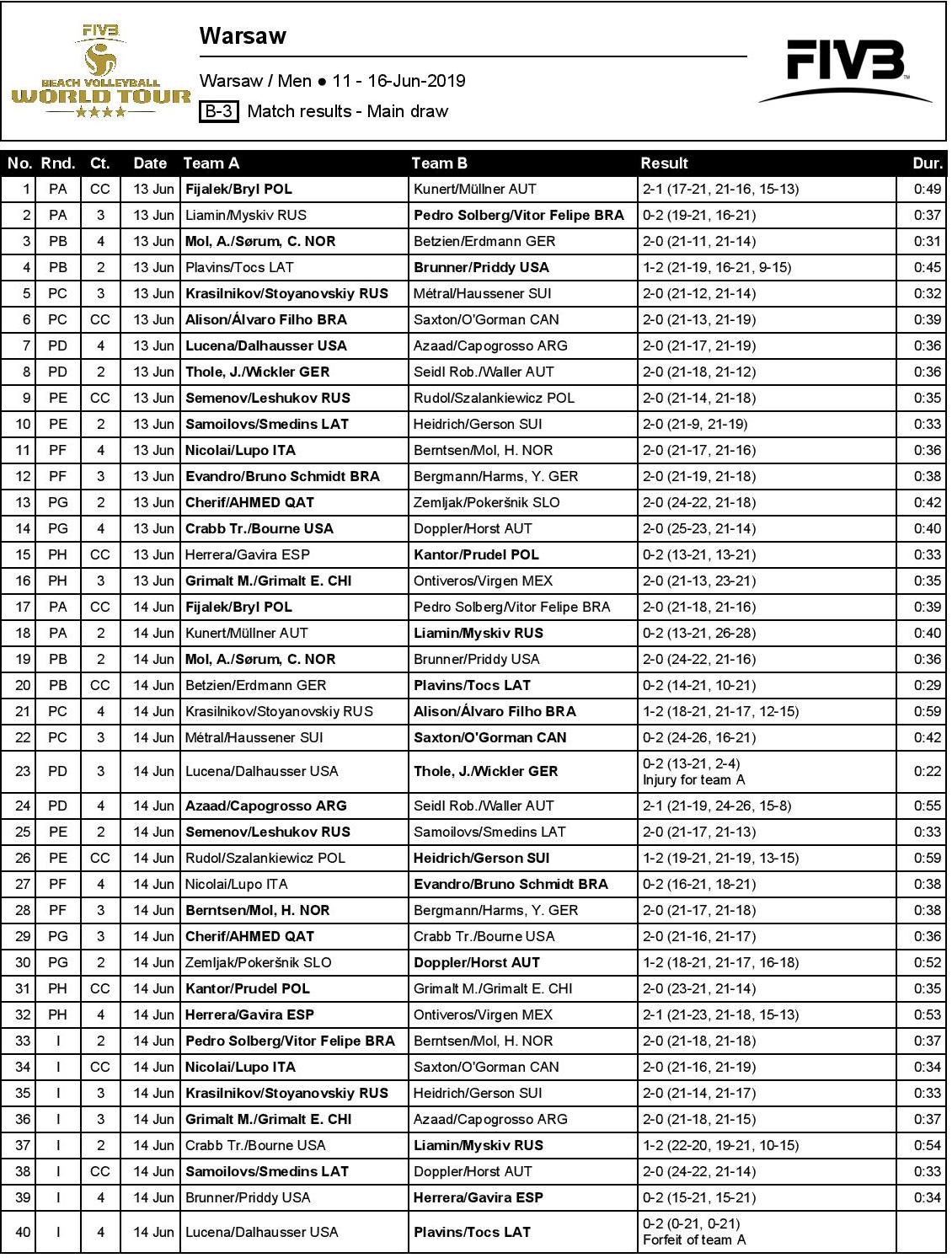 Thole & Wickler, seeded 13th, had a tough encounter with fourth-seeded American standouts Nicholas Lucena & Philip Dalhausser for the first place in Pool D. The Germans cruised to an emphatic 21-13 win of the first set. They were leading 4-2 in the second, when the US team withdrew from the match and from the tournament, due to Dalhausser’s painful discomfort in the abdominal muscles.
“Yesterday the weather conditions were very hard for everyone and it was a fight for everyone. We were able to stay confident in these conditions and play good volleyball. So we managed very well and won. Today, unfortunately, Phil had to forfeit in the second set. I think he didn’t want to take risks ahead of the World Championship, so we weren’t able to play the game through the end as we would have preferred to. I think we played very well in the first set, with good tactics, and it worked. So we are happy,” Clemens Wickler commented.
“I think it’s really fun to play here, with our whole crew with us. We feel really good here, in Warsaw. Last year’s tournaments in Ostrava and Warsaw gave us the start of getting into the main draws,” Julius Thole added. “Tomorrow is a new day. We will wait for our opponent; we will watch their game today and prepare for them. I think there are a lot of strong teams here, so we’ll have to put all in and then we will see...”
As it turned out later on Friday, Thole & Wickler’s next opponents will be Russia’s Nikita Liamin & Taras Myskiv (#16), who hammered out an eye-catching 2-1 (20-22, 21-19, 15-10) comeback against USA’s Trevor Crabb & Tri Bourne (#10) in the first elimination round. 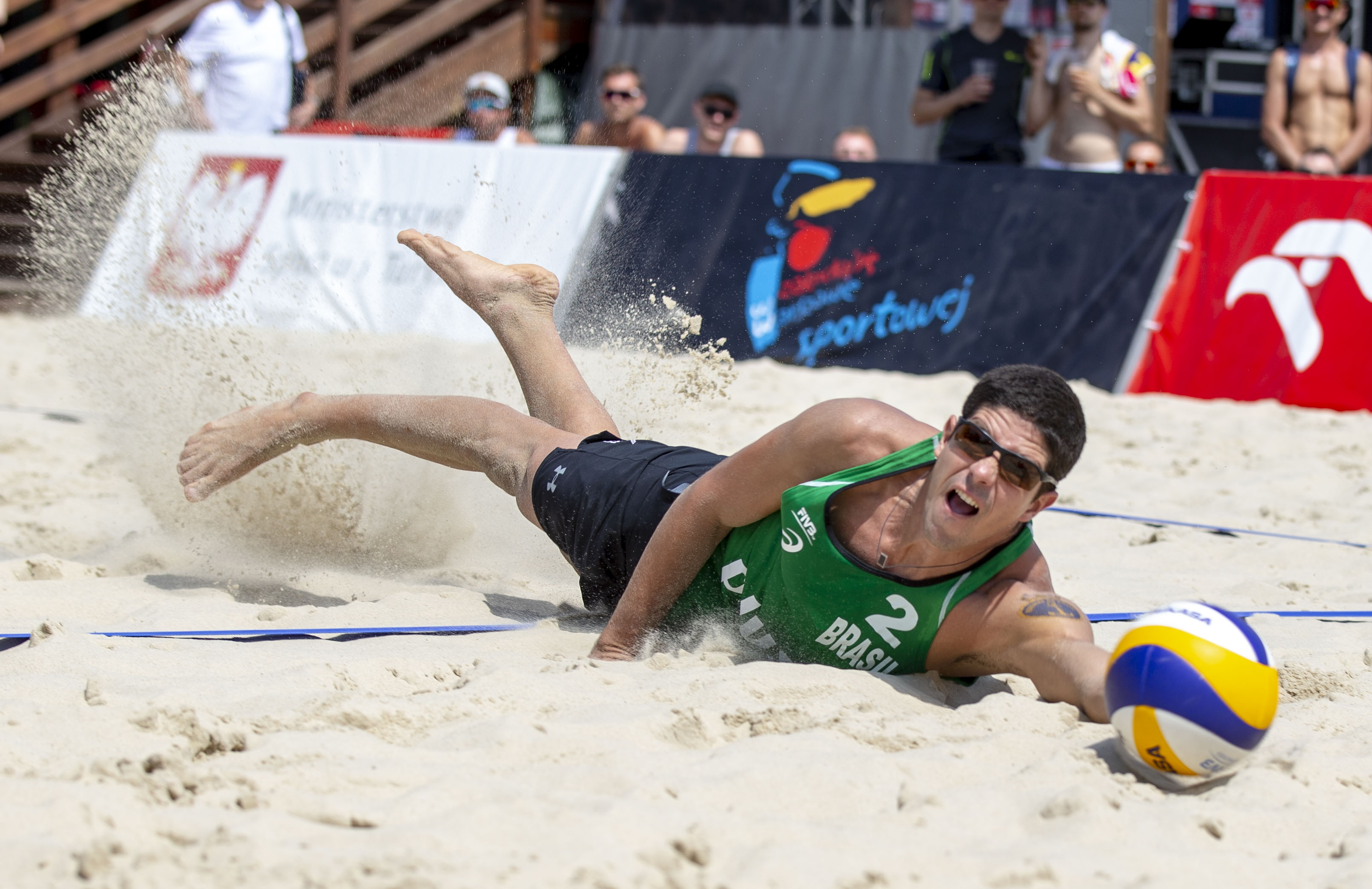 Spectacular dig attempt by Brazil’s Alvaro Morais Filho
Two Brazilian teams managed to upset higher seeded opponents in the pool winners’ matches. After almost one hour of play time, Alison Cerutti & Alvaro Morais Filho (#14) snatched a 2-1 (21-18, 17-21, 15-12) victory over third-seeded Viacheslav Krasilnikov & Oleg Stoyanovskiy of Russia to top Pool C. For a spot in the quarterfinals, they will face Chile’s Marco Grimalt & Esteban Grimalt (#9).
In Pool F, Evandro Goncalves Oliveira Junior & Bruno Oscar Schmidt (#11) mastered a 2-0 (21-16, 21-18) shutout of sixth-seeded Italians Paolo Nicolai & Daniele Lupo and are waiting for their second elimination round rivals - Latvia’s Aleksandrs Samoilovs & Janis Smedins.
Last year’s Warsaw winner Piotr Kantor of Poland and his current teammate Mariusz Prudel, seeded 25th, also broke the seeding with a 2-0 (23-21, 21-14) Pool H win over the Grimalt cousins. Their quest to defend the trophy will continue with a game against Italy’s Nicolai & Lupo on Saturday.
The other home favourites, Grzegorz Fijalek & Michal Bryl, won Pool A with a 2-0 (21-18, 21-16) victory over Brazil’s Pedro Solberg & Vitor Goncalves Felipe. In the round of 16, the top seeds will meet Latvia’s Martins Plavins & Edgars Tocs.
There were no surprises among the winners of the remaining three pools. Norway’s Anders Berntsen Mol & Christian Sandlie Sorum, seeded second at Warsaw and holding the number one spot in the World Ranking, managed a 2-0 (24-22, 21-16) win over USA’s Theodore Brunner & William Reid Priddy in Pool B to play against Pedro Solberg & Vitor Felipe next. Interestingly, in their first elimination round match, the Brazilians took a 2-0 (21-18, 21-18) victory over Anders Berntsen Mol’s brother Hendrik Nikolai Mol and their cousin Mathias Berntsen. 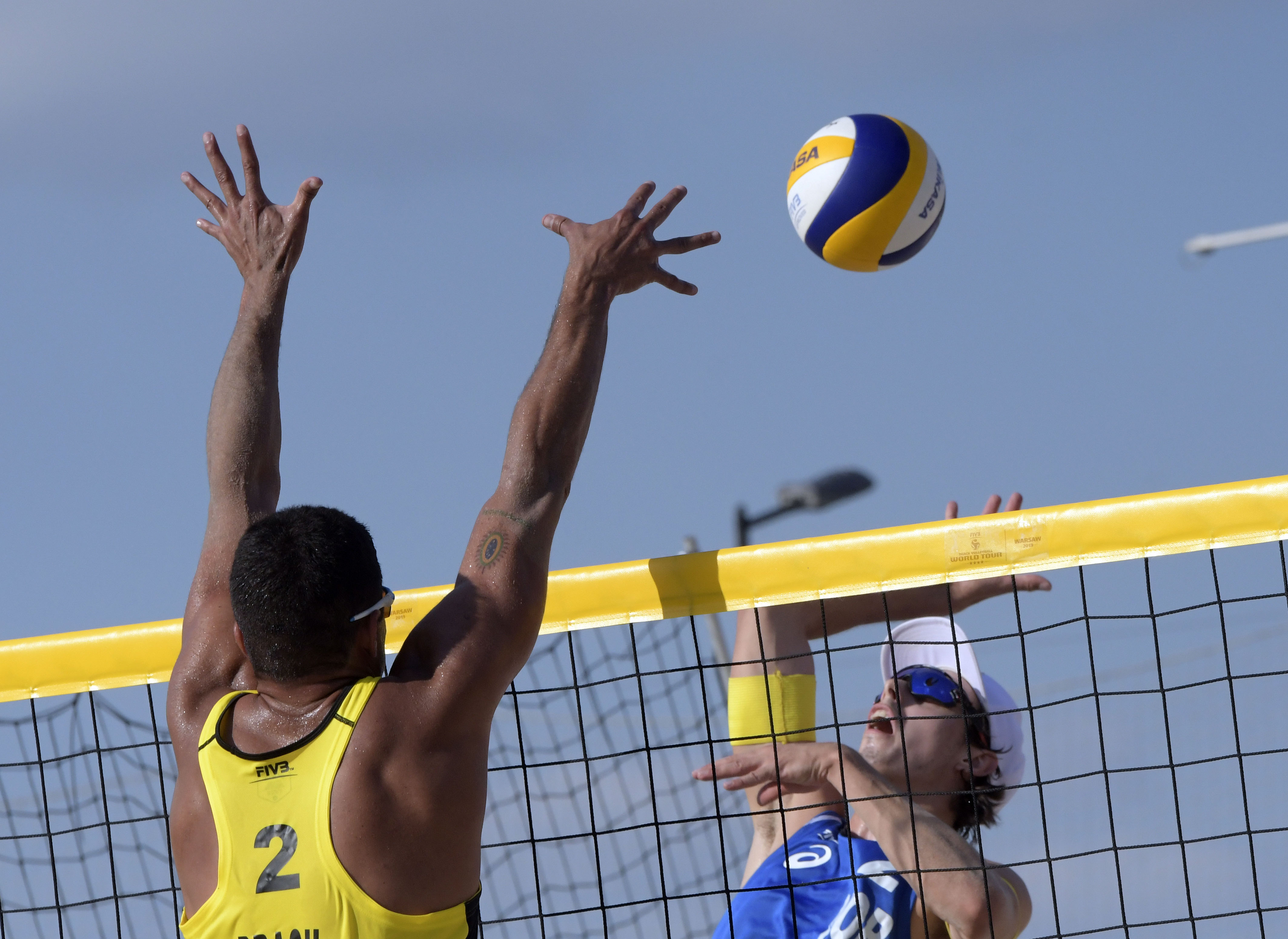