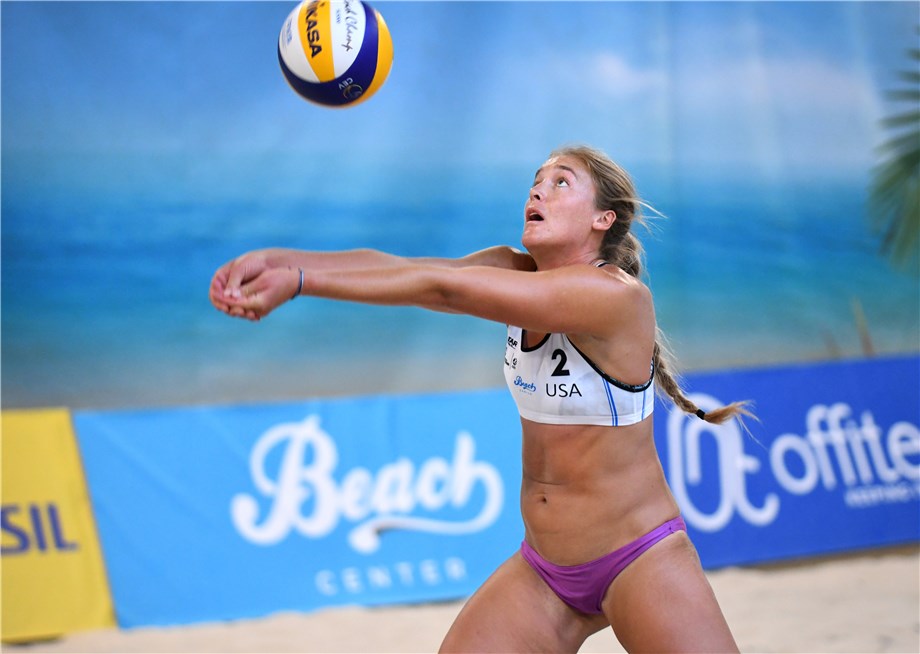 Gothenburg, Sweden, April 18, 2019 – All four qualification entries into the women’s draw of the one-star stop on the FIVB Beach Volleyball World Tour in Gothenburg were decided in tie-breaks. Emerging victorious from the tough sand battles at the indoor Beach Center in the Swedish city were pairs from Italy, the Netherlands, Poland and USA. 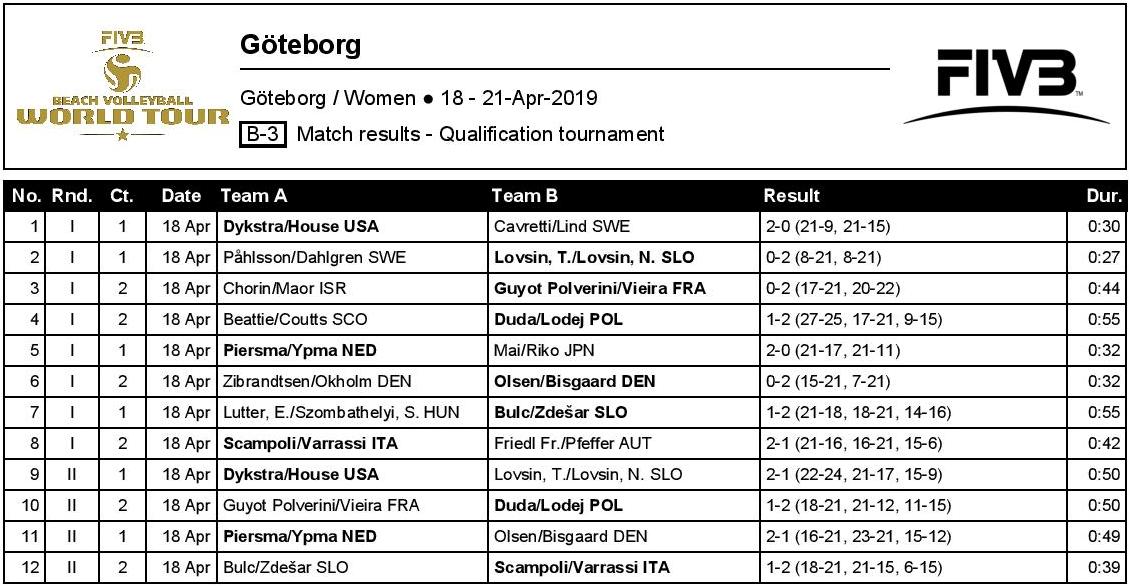 One of the teams that had to go through two tie-breaker sets on Thursday were 15th-seeded Italians Claudia Scampoli and Dalila Varrassi. In the first qualification round, they delivered a 2-1 (21-16, 16-21, 15-6) upset of second-seeded Austrians Franziska Friedl and Eva Pfeffer, to follow up with a 2-1 (21-18, 15-21, 15-6) win over Slovenia’s Katarina Bulc and Nina Zdesar in the second.
Poland’s Marta Duda and Marta Lodej, seeded fourth in the qualification bracket, also played six sets on the way to the main draw. They started off with a 55-minute 2-1 (25-27, 21-17, 15-9) comeback victory over Scotland’s Lynne Beattie and Melissa Coutts in what was one of the two longest running games of the day. In their second match, the Poles managed a 2-1 (21-18, 21-12, 15-11) win over France’s Mia Severine Guyot Polverini and Clemence Vieira. 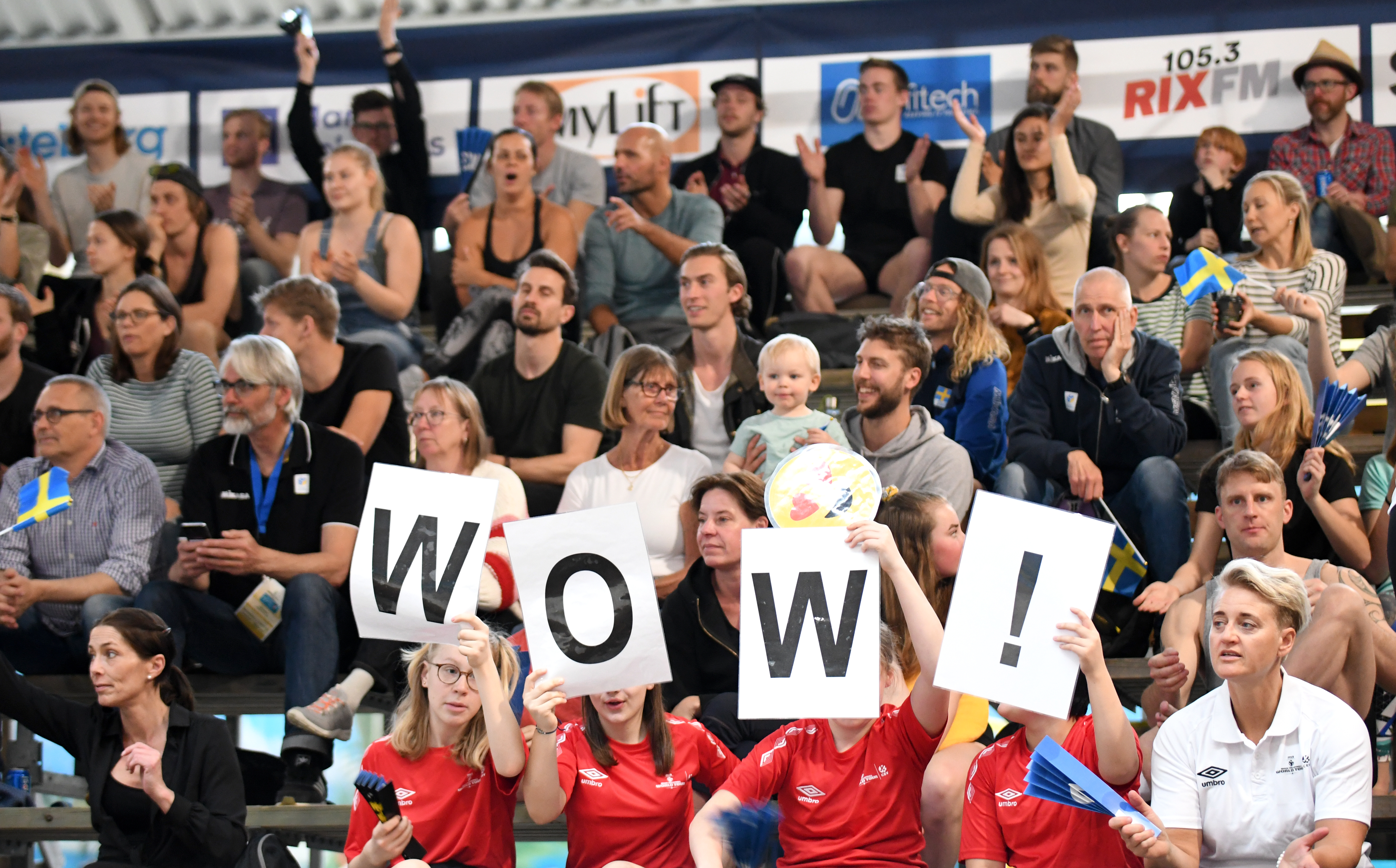 Cheering spectators on the stands at the Beach Center on Thursday
Emma Piersma and Pleun Ypma of the Netherlands cruised to a 2-0 (21-17, 21-11) straight-setter against Japan’s Mai Morioka and Riko Tsujimura before facing Denmark’s Cecilie Kollner Olsen and Sofia Norager Bisgaard for a spot in the main draw. Coming back from a set down, the third-seeded Dutch women powered through with a tight 2-1 (16-21, 23-21, 15-12) victory.
Top-seeded Americans Lara Dykstra and Cassie House were merciless towards bottom-seeded Swedes Sara Cavretti and Kristin Lind on the way to a 2-0 (21-9, 21-15) shutout in the first round, but then they had to overcome some tough opposition from Slovenia’s Tajda Lovsin and Nina Lovsin before getting the job done at a 2-1 (22-24, 21-17, 15-9) close.
Women’s main draw action is set to start at 09:00 local time on Friday. All games of the tournament in Gothenburg are streamed live on EuroVolley.tv.
Quick links - Beach volleyball:
FIVB Beach Volleyball World Tour - GothenburgFIVB.com - Beach volleyballFacebookTwitterInstagram