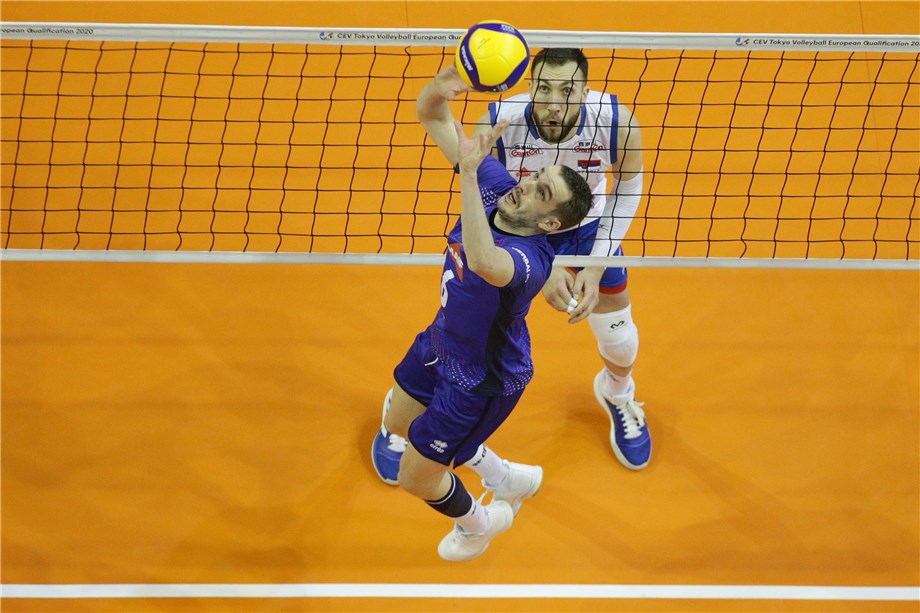 Berlin, Germany, January 5, 2020 – Continental Olympic qualification men’s action got underway with France shutting out reigning EuroVolley champions Serbia in the first of Sunday’s three games at the CEV tournament in Berlin. Slovenia claimed a straight-set win over Belgium, before Germany overpowered Czech Republic on the wings of Gyorgy Grozer’s eight aces.
CEV qualification tournament
With captain and setter Benjamin Toniutti delivering a fantastic performance in organizing his team’s offence, France mastered a 3-0 (25-21, 25-21, 25-22) victory over continental champions Serbia in the European qualification tournament opener in Berlin. Opposite Jean Patry became the best scorer of Sunday’s only match in Pool B by putting away 22 points towards the victory.
In the Pool A opener, opposite Toncek Stern powered Slovenia to a victorious start delivering 20 points, including three aces, towards a hard-fought 3-0 (25-23, 28-26, 25-20) win over Belgium. His counterpart on the opposite side of the net, Jolan Cox, scored 19 times for Belgium.
Inspired by over four thousand home fans on the stands at the Max-Schmeling-Halle, Germany managed a 3-0 (25-19, 25-22, 25-20) victory over Czech Republic in the other Pool A match of the day. Opposite Gyorgy Grozer was on fire, especially from the serving line, stunning the opponents with a total of eight aces towards a 21-point tally on top of the scoring chart. The conclusion of the second set was particularly dramatic, as a phenomenal serving spree by Grozer powered an incredible German comeback from a 22-17 Czech lead towards a 25-22 win crowned by two consecutive aces for the last two points.
Quick links - Volleyball:Continental Tokyo Volleyball QualificationFacebookTwitterInstagramYoutube