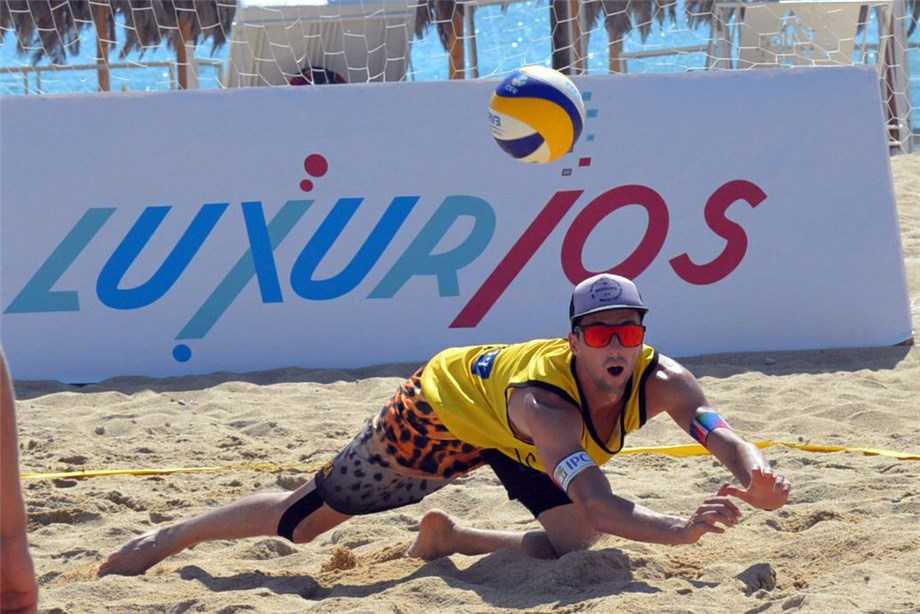 Martin Pihera of the Czech Republic tries to save the ball in the deciding match against Sweden in the qualifiers of the 2019 FIVB Beach Volleyball World Tour One Star event in Ios.

Ios, Greece, June 14, 2019 - The top two seeds of the men's Qualification Tournament at the 2019 FIVB Beach Volleyball World Tour 1 star event at the stunning location of Mylopotas Beach on the Cycladic island of Ios advanced Friday to the 16-team Main Draw of the tournament which begins Saturday morning.

But third-seeded Andrey Bolgov / Vladislav Ermilov of Russia were knocked out by the second Czech team of Jindrich Weiss / Donovan Dzavoronok 2-0 (21-15, 21-13).

Leading the pack in the men's Main Draw are Russia's Maxim Sivolap / Artem Yarzutkin, seeded No. 1.

They are playing in their 19th FIVB World Tour event, including a gold medal finish at the Kampong Speu One Star tournament earlier this year. In their last appearance before coming to Ios, the Russians picked up the silver medal at the Baden One Star event last week after losing in the final to Austria's Clemens Doppler / Alexander Horst.

Toms Smedins / Haralds Regza of Latvia are the 2nd seeded side in the 16-team Main Draw in Ios, with Yu Koshikawa / Jumpei Ikeda of Japan entering at No. 3.