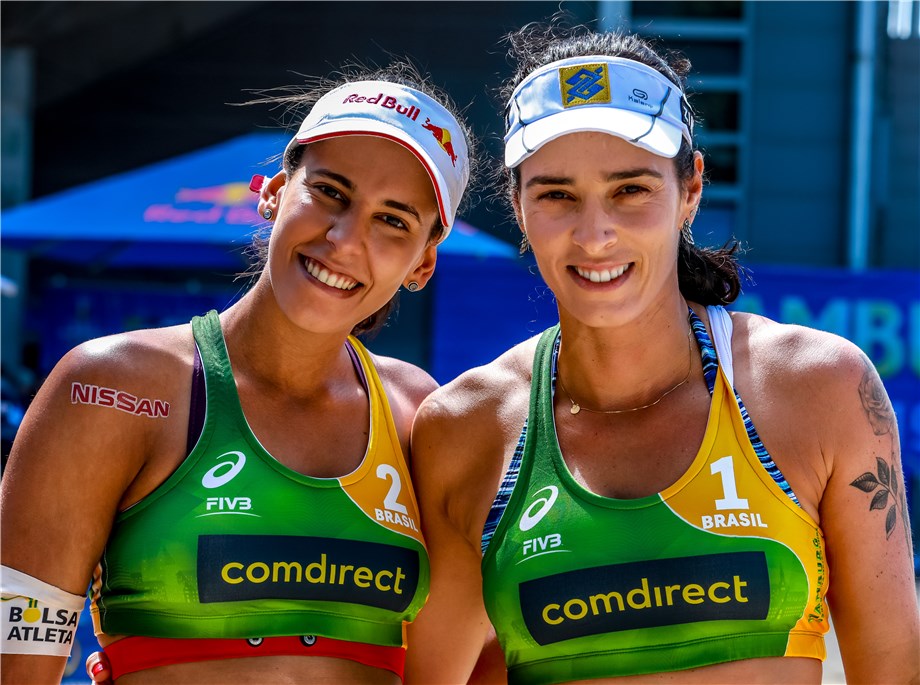 Eduarda "Duda" Lisboa (left) and Agatha Bednarczuk of Brazil after their opening winning Friday against a Cuban team at the 2019 FIVB World Championships.

Hamburg, Germany, June 30, 2019 - The first weekend of play in the US$1-million FIVB World Championships concludes here Sunday with eight of the 10 top-ranked women's beach volleyball teams in the world in action during the second round of group competition.
Quick links - Beach volleyball:
FIVB Beach Volleyball World Championships Hamburg 2019
FIVB.com - Beach volleyball
Facebook
Twitter
Instagram
With only No. 7-ranked Barbora Hermannova/Marketa Slukova of the Czech Republic and No. 8 Sara Hughes/Summer Ross missing from Sunday's line-up of women's matches, the men's schedule features five of the top-10 ranked pairs on the FIVB World Tour participating on the third day of competition led by No. 1-ranked Anders Mol and Christian Sorum of Norway. 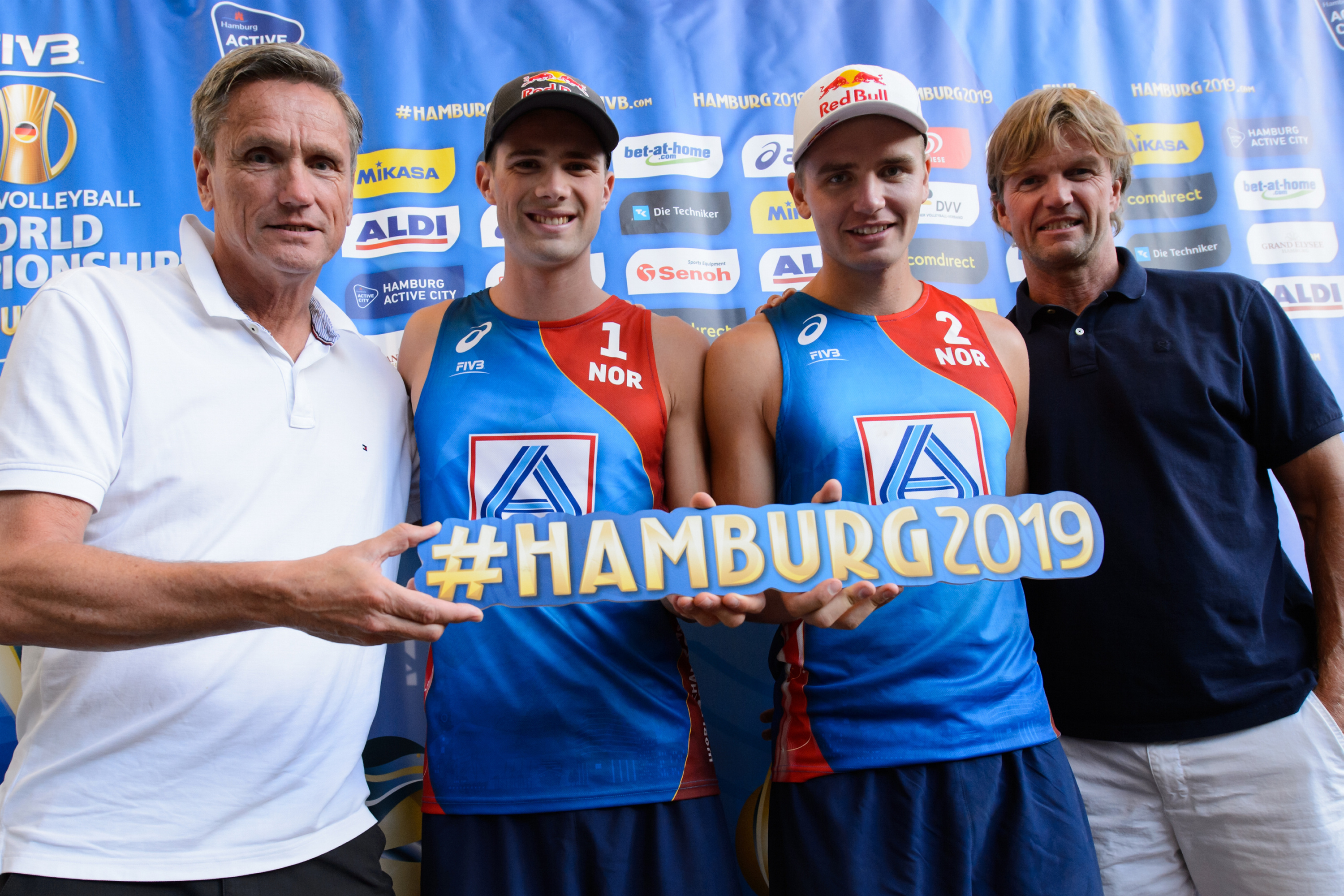 Anders Mol (second from left) and Christian Sorum (second from the right) pose after their opening win Friday with legendary Norwegian beach volleyball players Jan Kvalheim (left) and Bjorn Maaseide.
The Czech Republic team is missing from the competition due to a toe injury for Slukova as she and Hermannova withdrew from the competition Thursday as the No. 2-seeded women's team in the World Championships.  Hughes and Ross won their first match Saturday and play their second group contest Monday against a team from China in Pool K.
Agatha Bednarczuk and Eduarda "Duda" Lisboa of Brazil, who assumed the women's world ranking leadership this week after trailing Canadians Heather Bansley and Brandie Wilkerson for 35 weeks in the standings, will be the first of the 14 ranked teams to play Sunday.
Seeded sixth in competition due to their FIVB technical ranking in mid-May, Agatha and Duda will play 30th-seeded Miki Ishii and Megumi Murakami of Japan in a Pool F match at 10 a.m. (local) time on an Am Rothenbaum Stadium side court. It will be the third FIVB World Tour match between the two teams with Agatha and Duda winning the first two.
Rothenbaum Stadium has been a productive venue for Agatha and Duda, who are attempting to erase memories of their last World Championship appearance together when the Brazilians finished 17th at the 11th edition of the biennial in 2017 at Vienna.
"I have always enjoyed playing in Hamburg," said the 36-year-old Agatha, who captured the World Championship trophy in 2015 at the Netherlands with Barbara Seixas. "The crowds are amazing and the venue setting in this beautiful city is wonderful."
As for their finish in the last World Championships in Vienna, Agatha said that “is in the past.  I am more concerned about the match with the Japanese right now.” Agatha is competing in her fifth World Championships as she captured the 2015 title with Barbara Seixas at the Netherlands after placing 17th in both 2005 and 2013 with Sandra Pires and Maria Antonelli, respectively.
Agatha and Duda have placed second and first in their first two appearances on the Rothenbaum Stadium courts by losing to Laura Ludwig and Kira Walkenhorst in the 2017 finale and capturing the gold medal in 2018 with a gold medal with over Hermannova and Slukova.  Overall, the Brazilians have won 12 of their 14 matches played at Rothenbaum with a $255,000 in winnings.
Mol and Sorum, who are the top-ranked men's team on the FIVB World Tour for 47-straight weeks, will be challenged by 25th-seeded Jonathan Erdmann/Sven Winter of Germany in a 5 p.m. center court Pool A match.
Like Agatha and Duda, Mol and Sorum topped the 2018 FIVB World Tour Finals podium by defeating Poland's Michal Bryl and Grzegorz Fijalek in the gold medal match. Bryl and Fijalek, who are the No. 2-ranked men's team in the world, will play the first centre court match Sunday at 1 p.m. versus Philipp Bergmann/Yannick Harms of Germany in a Pool B contest. 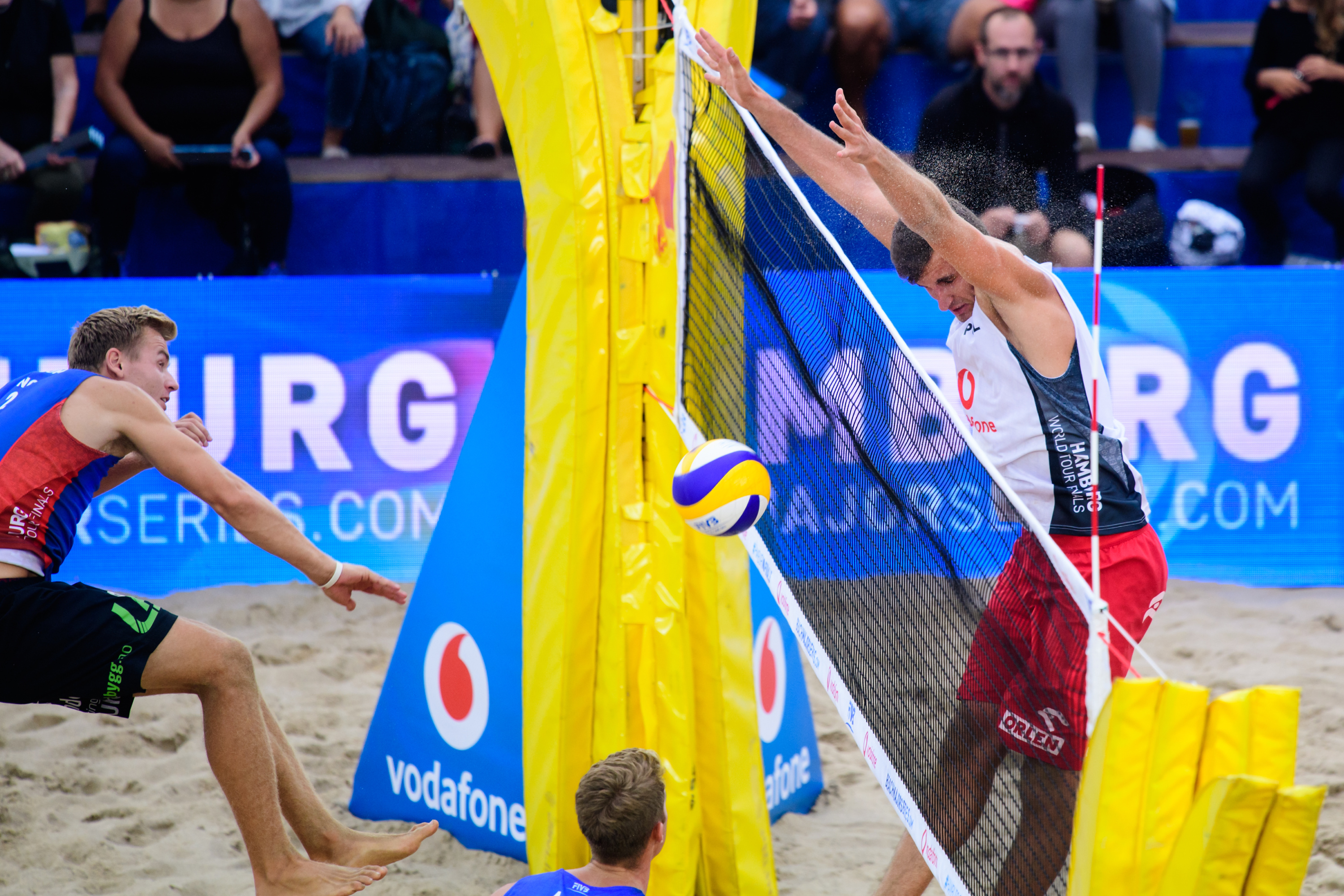 Michal Bryl (right) of Poland blocking against Christian Sorum of Norway in the gold medal match at the 2018 FIVB World Tour Finals in Hamburg.
Sunday's 28-match schedule marks the third of 10 days of competition at the 2019 FIVB World Championships as play concludes next Saturday with the women's gold medal match and Sunday for the men's title contest where the winning teams will share the $60,000 first-place prize while earning a spot in the Tokyo 2020 Olympic Games for their country.