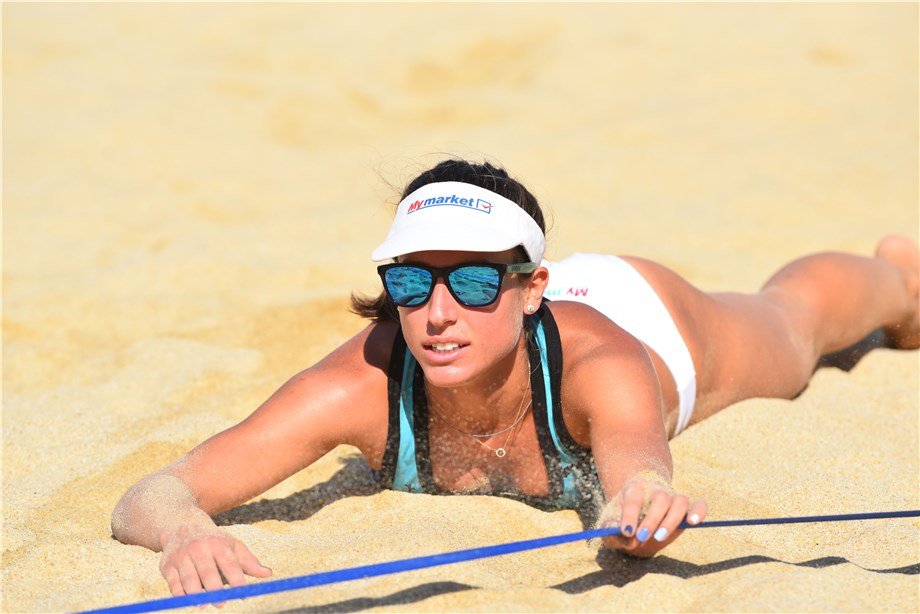 Greece's Dimitra Manavi on the sand after defencive action as she and team mate Konstantina Tsopoulou advance to the quarterfinals of the 2019 FIVB Beach Volleyball World Tour 1-star stop on the Cycladic island of Ios.

Also directly through to the top eight with two wins each in pool play were two teams that had entered the Main Draw through Friday's qualifiers, Anaya Evans / Ellie Austin of England and Beata Vaida / Ioana-Alexandra Ordean of Romania.

Cyprus' Mariota Angelopoulou / Zoi Konstantopoulou made up the undefeated teams with direct access to the quarterfinals.

But second-seeded Tereza Kotlasova / Daniela Resova of the Czech Republic, after suffering a defeat in morning pool play, had to go through the knockout stage of the Round of 12 where they edged Denmark's Maria Elisabeth Tyndeskov / Line Trans Hansen 2-1 (21-18, 17-21, 15-12) to make it through.

This sets up a quarterfinal clash between the top two seeds of the tournament, Sunday morning.

Claudia Scampoli / Dalila Varrassi who originally entered the Ios event as No. 8 of the Qualification Tournament and continued as No. 11 in the Main Draw, upset the Klinger sisters in the Round of 12.

Action on Mylopotas Beach on Ios island continues Sunday morning with the quarterfinals and semifinals and wraps up in the afternoon with the medals matches.