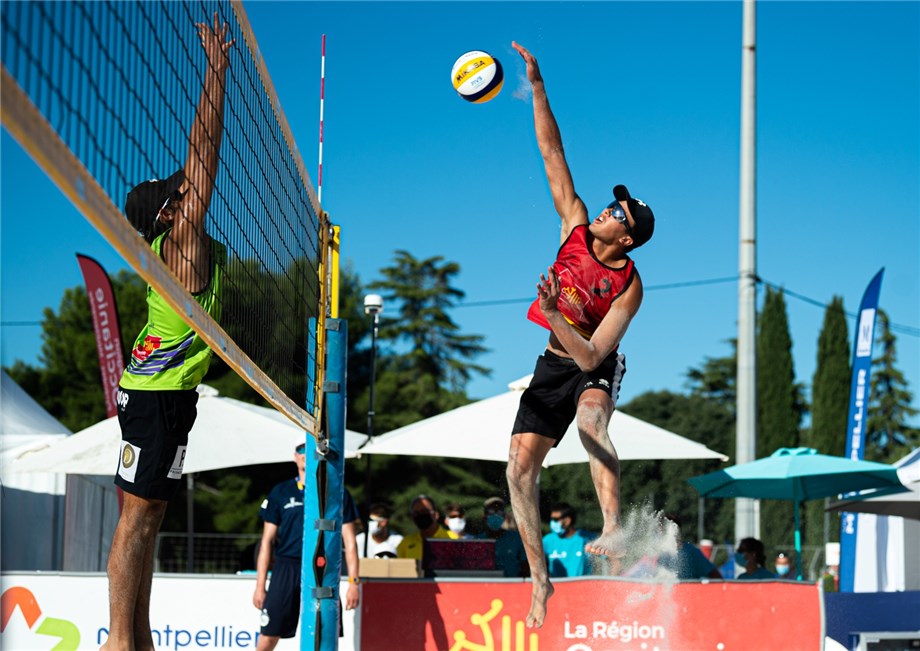 Matthew Immers of the Netherlands spikes against Portugal

Montpellier, France, August 25, 2020 – Teams from Israel, the Netherlands, Sweden and Switzerland completed the main draw line-up at the men’s Montpellier 1-star stop on the 2020 FIVB Beach Volleyball World Tour by winning the deciding qualification matches on Tuesday. Only one of the four highest-seeded duos in the qualification bracket managed to make the 16-team field for Wednesday.

Dutchmen Leon Luini and Matthew Immers, seeded ninth, were the first to secure their spot in the main draw. They upset the number one seeds, Martin Appelgren and Alexander Herrmann of Sweden, with a 2-1 (21-15, 15-21, 15-10) defeat in the second qualification round. Earlier on Tuesday, Luini and Immers managed a 2-0 (21-19, 21-15) first-round win over Portugal’s Guilherme Maia and Filipe Leite.
Another exciting three-setter decided the next successful qualifiers. Sixth-seeded Nathan Broch and Jonathan Jordan of Switzerland emerged from a dramatic tie-breaker against third-seeded Jeremy Silvestre and Titouan Halle of France to stamp a 2-1 (21-16, 17-21, 18-16) victory. In the first round, Broch and Jordan claimed a 2-0 (21-13, 21-17) win in an all-Swiss clash with Immanuel Zuercher and Tinko Schnegg.
Number five in the bracket, Sean Faiga and Netanel Amiram Ohana of Israel registered two speedy wins – 2-0 (21-13, 21-10) over France’s Liam Patte and Alexandre Klein and 2-0 (21-17, 21-10) over fourth-seeded Damjan Pusonjic and Vukasin Rajkovic of Serbia.
Sweden’s Peter Lundgren and Jakob Wijk Tegenrot, number two in the bracket, were the only team that made the main draw after a single victory on Tuesday. They passed through round one with a bye before hammering out a hard-fought 2-0 (22-20, 21-18) win over seventh-seeded Frenchmen Yann Faure and Florian Gosselin.
Live streaming of the matches is available at the Montpellier Beach Masters video channel on YouTube.
Quick links:
FIVB Beach Volleyball World Tour - Montpellier 1-star
FIVB Beach Volleyball World Tour
Olympic Games Tokyo 2020
Facebook
Twitter
Instagram
Youtube