Lausanne, Switzerland, July 21, 2016 - The International Volleyball Federation and the Beach Major Company are pleased to announce Toronto, Canada as the venue for this year's Swatch Beach Volleyball FIVB World Tour Finals. The event will take place from September 13 to 18, with matches beginning on the 14th.

Lausanne, Switzerland, July 21, 2016 - The International Volleyball Federation and the Beach Major Company are pleased to announce Toronto, Canada as the venue for this year's Swatch Beach Volleyball FIVB World Tour Finals. The event will take place from September 13 to 18, with matches beginning on the 14th. The second edition of the World Tour Finals follows on from the highly successful event in Fort Lauderdale, USA in 2015 which crowned Brazilians Bruno Oscar Schmidt/Alison Cerutti and Talita Antunes/Larissa Franca.

FIVB President Dr. Ary S. Graça F° said : "The Swatch Beach Volleyball FIVB World Tour Finals are taking beach volleyball to a new level of excellence and ensuring it takes the next step towards becoming the world’s leading family sport entertainment. Fans can look forward to a great event when the world’s best teams gather in Toronto for what promises to be a fitting climax to a spectacular Olympic year.” 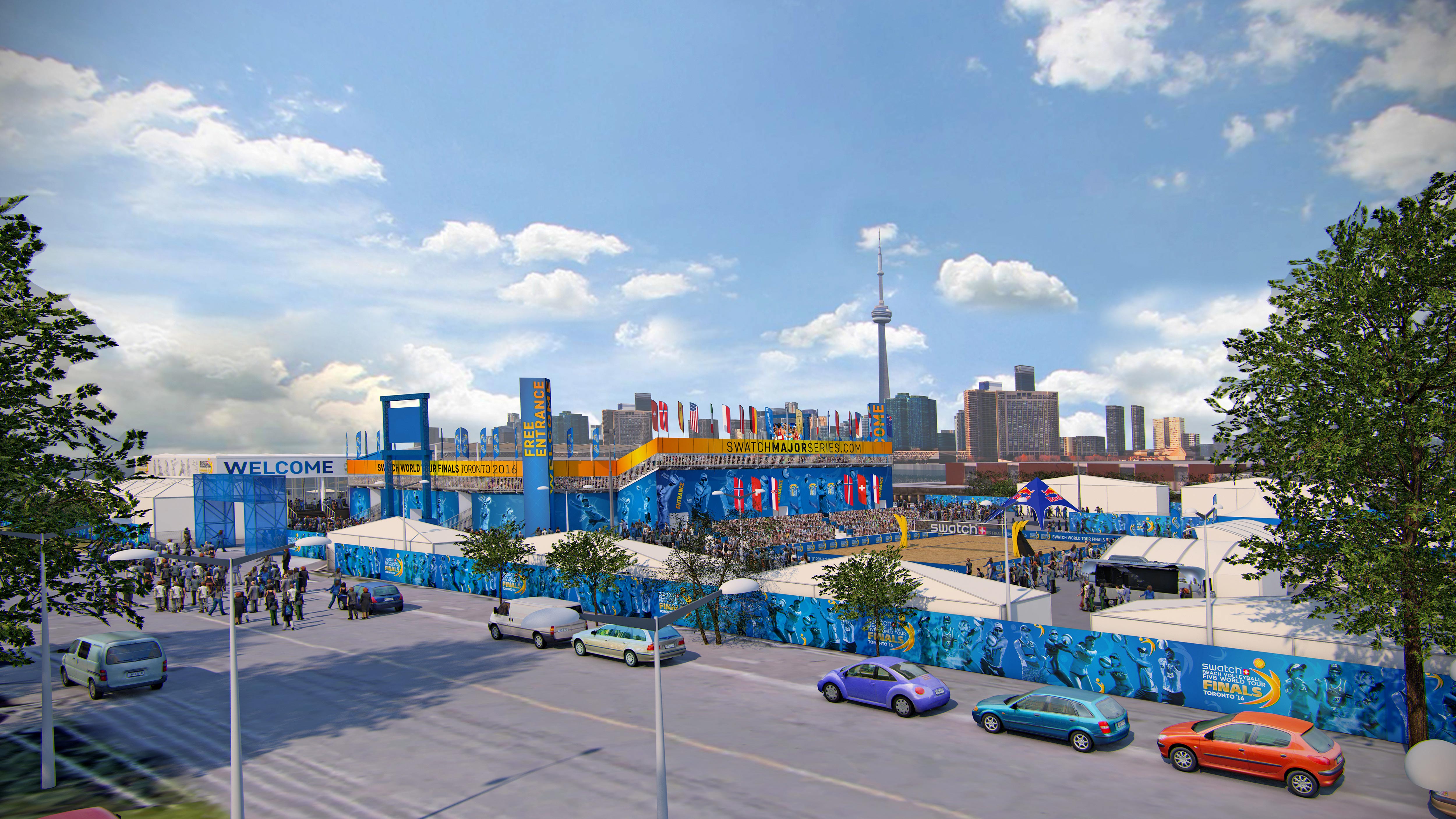 The much-anticipated second edition of the Swatch Beach Volleyball FIVB World Tour Finals in Toronto will cap a bumper season for international beach volleyball, including Major Series events in Hamburg, Porec, Gstaad and Klagenfurt, Grand Slams in Rio de Janeiro, Moscow, Olsztyn and Long Beach, the beach volleyball tournament at the Rio 2016 Olympic Games and a total of 13 Open events. Teams will be able to collect the last points to qualify for the Finals at the A1 Major Klagenfurt from July 26 to 31 and at the Long Beach Grand Slam from August 23 to 28.

Featuring 12 teams per gender including wild cards, with a quota of maximum two teams per country, the participants will be grouped in four pools of three followed by quarterfinals, semifinals and finals. And coming under a month after the Rio 2016 Olympic Games, the event is likely to feature the new men's and women's Olympic champions.

The inaugural edition of the Swatch FIVB World Tour Finals in 2015 set the standard high for future events. With the Fort Lauderdale stadium packed to maximum capacity for the semifinals and finals matches, fans were treated to a premier sporting experience as the world's best beach volleyball teams took to the courts to play for the largest prize money in international beach volleyball history. Even the soaring temperatures could not keep people away from the party atmosphere which included music, food, drinks, dancing and an interactive vendor village experience.

The fan experience was also taken to a new level with 19 cameras on site, including high-speed cameras providing ultra-slow motion replays, and new graphics providing information on temperature, humidity, wind speed and wind direction. Dedicated graphics gave fans more detail on the jump height of athletes going in for a spike or a block. Twelve high-resolution Hawkeye cameras were also in place for the Challenge System, which was used for the first time at an FIVB Major Series event.

For this year’s World Tour Finals the spectator experience will be further enhanced with the same Hawkeye setup as per the Rio 2016 Olympic Games which includes key match data and other facts and figures.

The Finals in Toronto will be the first World Tour event to be held on Canadian soil since the Québec Open in 2011 and wins for Todd Rogers and Phil Dalhausser of the United States in the men's competition and Maria Antonelli and Talita Antunes of Brazil in the women's. Canadian teams have made their mark on the 2015/2016 World Tour with John Binstock and Sam Schachter claiming silver medals at the Cincinnati Open in May and Heather Bansley and Sarah Pavan winning bronze a week later at the Moscow Grand Slam and silver at the Porec Major at the beginning of July.
This website uses cookies to ensure you get the best experience on our website. For more information please read our Cookies Policy.
Ok