Redondo Beach, California, USA, September 15, 2020 - Trevor Crabb has been taking it easy the past six weeks since winning a major domestic beach volleyball event at the start of August with Tri Bourne.

Redondo Beach, California, USA, September 15, 2020 - Trevor Crabb has been taking it easy the past six weeks since winning a major domestic beach volleyball event at the start of August with Tri Bourne.
Quick links:
FIVB Beach Volleyball World Tour
Olympic Games Tokyo 2020
Facebook
Twitter
Instagram
Youtube
"I went on a few trips since playing in the three Long Beach events," said Crabb, who turns 31 today and is currently listed with Bourne as the top American men's team on the Tokyo Olympic provisional ranking chart that have played the required 12 qualifying events.  "I have also been training on the sand a couple times a week to stay in shape."
A standout high school basketball and volleyball player in high school in his native Hawai'i, Trevor Crabb focused on basketball in 2009 when he started college at a school in the state of Washington before switching to volleyball where he played three seasons (2011-2013) at Long Beach State.
When asked about switching sports, Trevor Crabb said “I knew I wasn’t good enough to be able to keep playing basketball post college and I felt I could play professionally in volleyball, so I made the switch.”
Winning the title on August 2 at the third of three Long Beach events was especially gratifying for Trevor Crabb and Bourne as the pair defeated teams that they are competing against for the two American men’s berths for the Tokyo Olympics.
Trevor Crabb and Bourne have compiled 4,520 for their best 12 finishes while Taylor Crabb and Jake Gibb have 5,120 points for 11 events and Phil Dalhausser and Nick Lucena 4,640 points for 10 events. 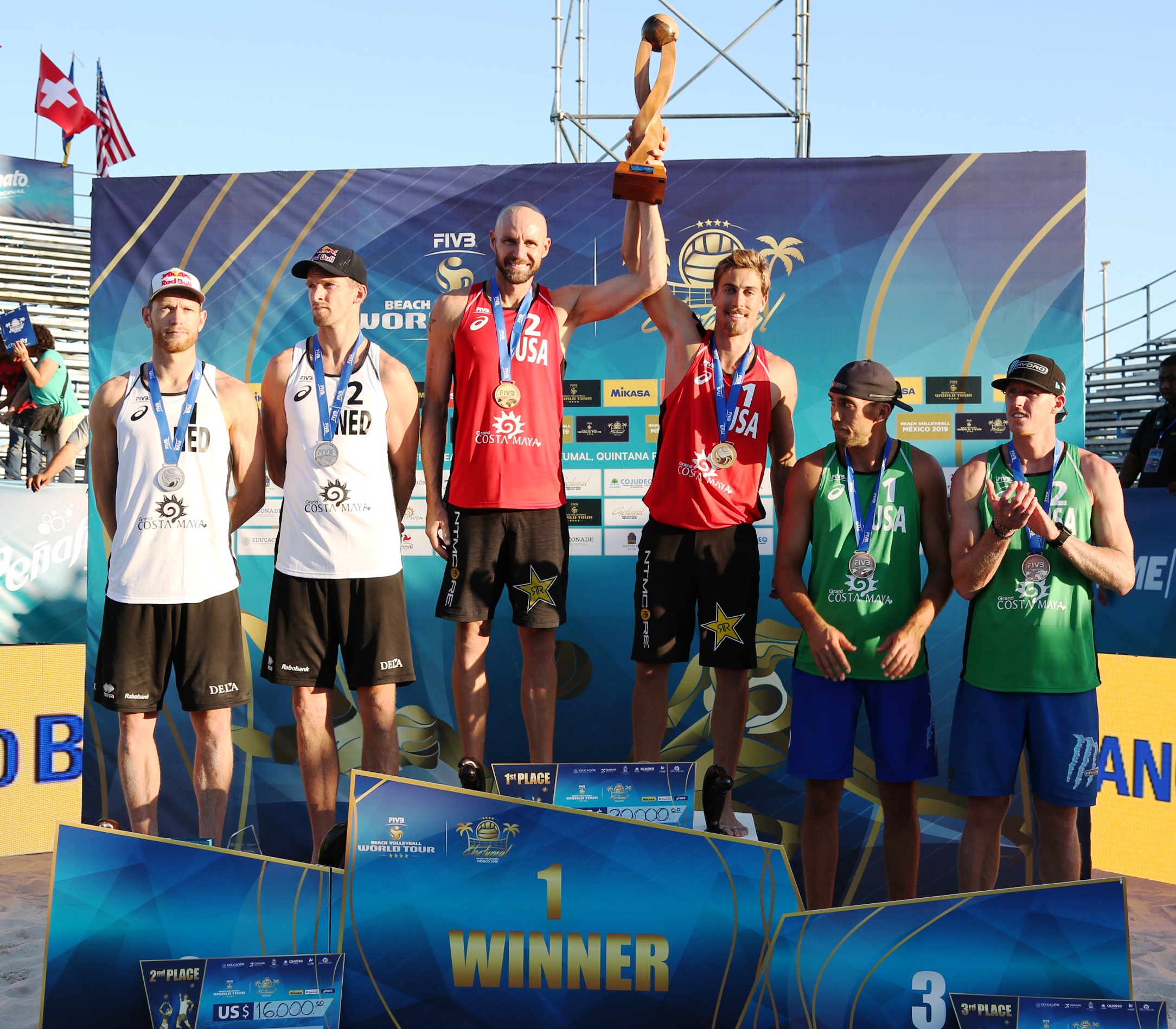 Trevor Crabb (second from the right) and Tri Bourne placed on the podium at last November's Chetumal Open with Dutchmen Alexander Brouwer and Robert Meeuwsen and American rivals Jake Gibb (left) and Taylor Crabb
"It was a great feeling defeating those two teams in the final Long Beach event after losing to both pairs the previous two week," said Trevor Crabb, who started playing competitively on the beach in 2011 with his first FIVB World Tour event in 2014. "Beating the team that knocked you out before felt great, especially with Phil and Nick playing great and winning the first two tournaments by defeating Taylor and Jake in those two finals."
Trevor Crabb and Bourne have a compiled 5-8 record with their main American rivals. The title match win on August 2 in Long Beach evened Trevor Crabb and Bourne's record with Dalhausser and Lucena at 3-3.  Trevor Crabb and Bourne's semifinal win over Taylor Crabb and Gibb the same day snapped a five-match losing streak to their other American rival.
"Those two teams were the only ones on our radar before the event," said Trevor Crabb as he and Bourne compiled seven other domestic wins this season in Long Beach. "We trained all week before the Long Beach finale just for them and it paid off."
As for the postponement of the 2020 Olympics Games, Trevor Crabb said "it actually gives us a little benefit because we get another whole year to get better. We shall see how many events actually happen before Tokyo with pandemic and all that."
Trevor Crabb and Bourne have played in a combined 24 domestic, NORCECA and FIVB World Tour events with eight overall podiums placements. With a combined 68-41 match record (62.4 winning percentage), Trevor Crabb and Bourne have claimed a gold medal on each of the three circuits.
Before placing fourth at the 2019 FIVB Beach Volleyball World Championships in Germany, Trevor Crabb and Bourne captured a World Tour gold medal in October 2018 in China in their first international start together. At the Hamburg Worlds, the Americans dropped their final two matches in three sets to eventual winners Viacheslav Krasilnikov/Oleg Stoyanovskiy of Russia and Anders Mol/Christian Sorum of Norway. 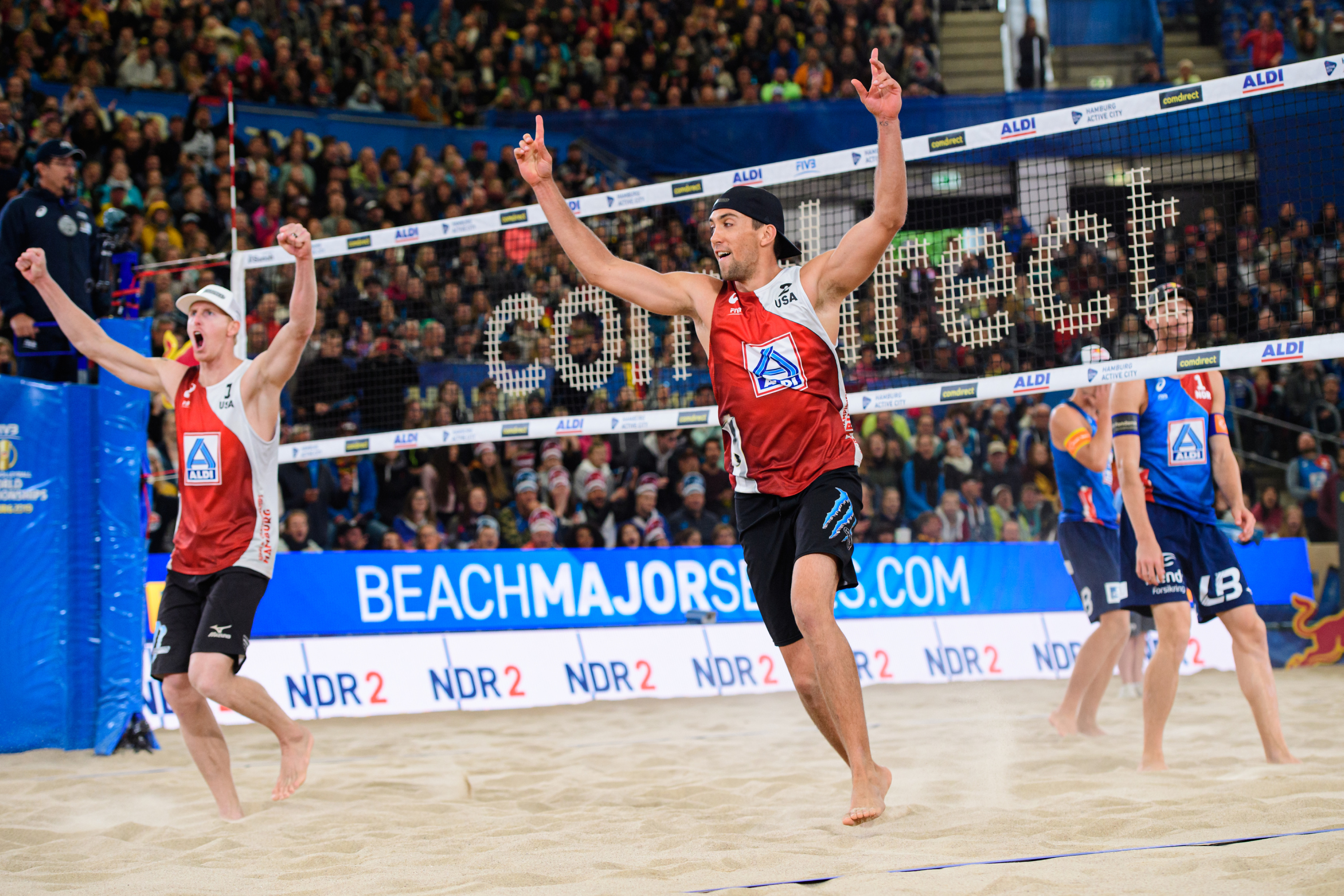 Trevor Crabb (second from the left) and Tri Bourne (left) celebrate a set win against Norway's Anders Mol and Christian Sorum at the 2019 FIVB World Championships
“Definitely, the World Championships last year in Hamburg,” said Trevor Crabb when asked about his most memorable moment on the world stage.  “To play in front of that many people was a first for me. And to make the medal rounds made it even better.”
Being from Hawai’i, Trevor Crabb said his favourite FIVB World Tour spot “would have to be Gstaad. It’s hard to beat that scenery. It’s just unlike any other venue because you are playing in the mountains and not the beach.” 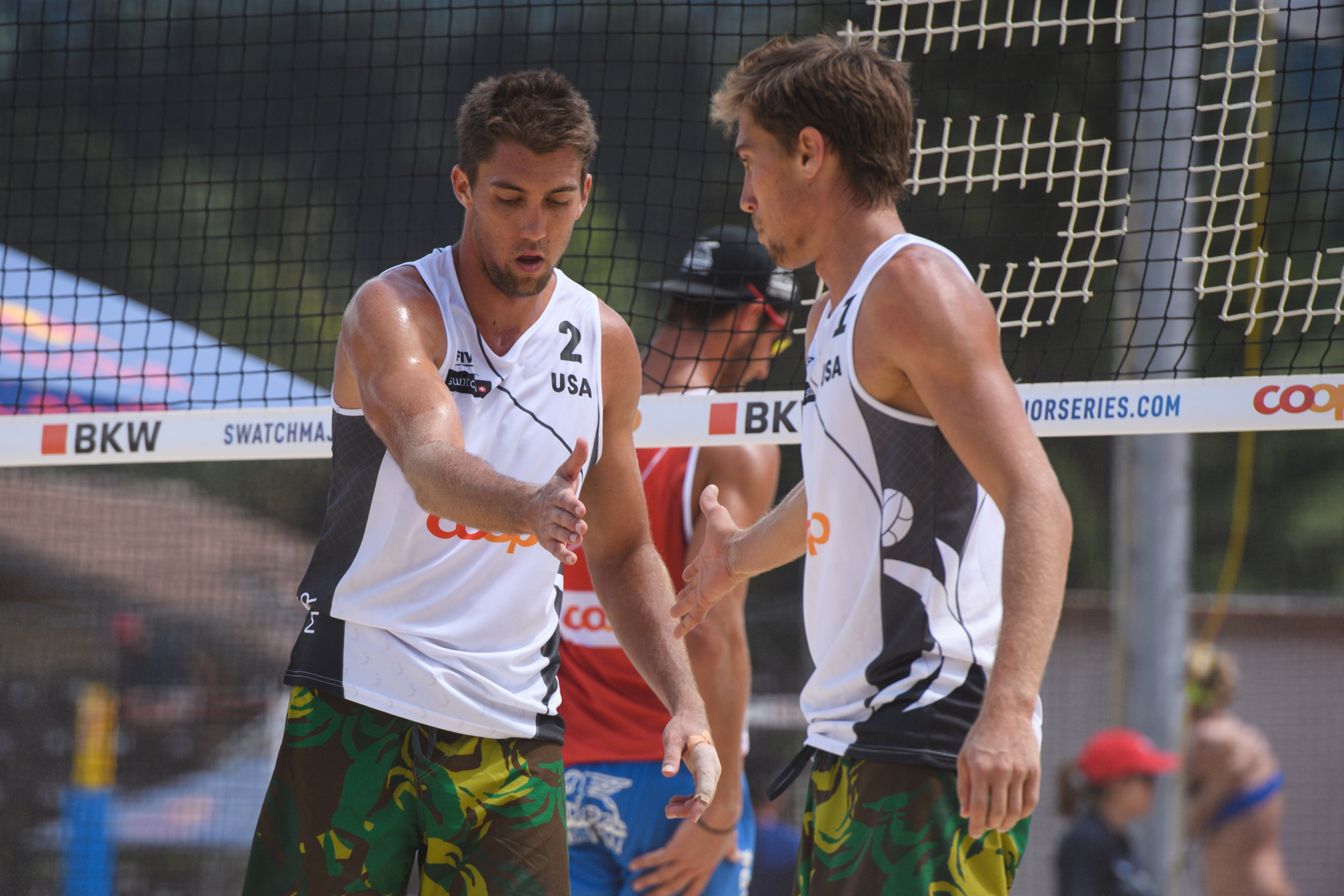 Trevor Crabb (left) and younger brother Taylor placed ninth at the 2016 Gstaad Major
With his younger brother Taylor, who will be 29 this January, the Crabbs come from an athletic background where their mother (Paula) was a gymnast at Southern Connecticut University and their uncle (Tony) was an assistant volleyball coach for the United States that won the gold medal at the 1984 Los Angeles Olympics. Their cousin Lindsey Berg was a three-time volleyball Olympian with silver medals from the Beijing 2008 and London 2012 Summer Games.