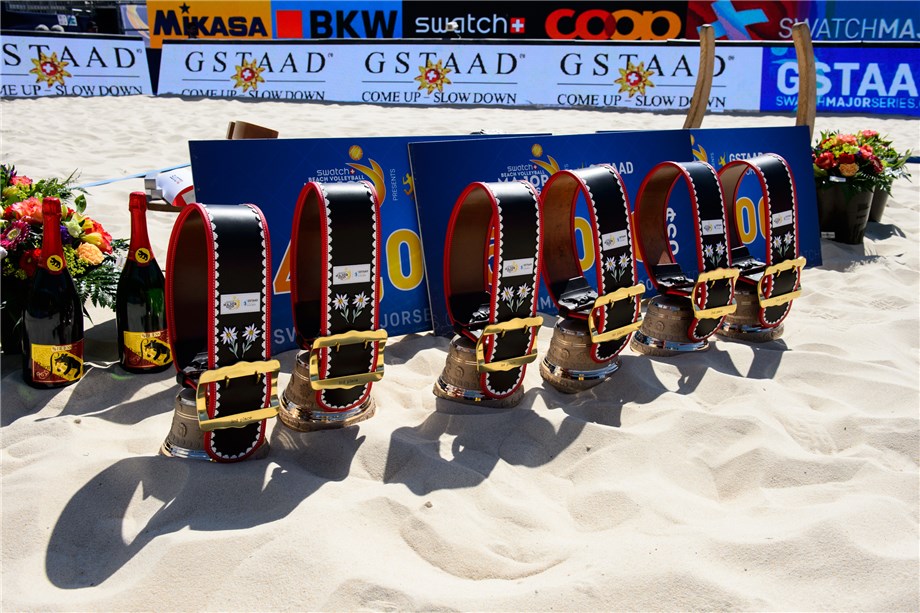 The Gstaad cowbells await the podium placers at the 20th Swatch Major Gstaad with the men's gold medal match Saturday and the women's finale Sunday.

Gstaad, Switzerland, July 12, 2019 - The chase for the cowbells continues here Friday at the US$600,000 Swatch Major Gstaad with two rounds of elimination matches for both men and women on the schedule for the third of five days of main draw play.
Quick links - Beach volleyball:
FIVB Beach Volleyball World Tour - Gstaad, Switzerland
FIVB World Tour - Daegu, Korea
FIVB World Tour - Alba Adriatica, Italy.
FIVB.com - Beach volleyball
Facebook
Twitter
Instagram
Celebrating 20 years of beach volleyball play in the resort town located in the Bernese Oberland region of the Swiss Alps, the gold medal winning teams Saturday for men and Sunday for women will collect the $40,000 first-place prize along with joining the other podium placing teams in receiving the prestigious cowboys from tournament director Ruedi Kunz.
Heading into Friday's schedule of 12 men's and 16 women's matches, a total of 40 pairs from 16 countries are still competing.  Beach volleyball power Brazil has eight tandems remaining in the competition along with five pairs from the United States, and three tandems each from Canada, the Netherlands, Russia and host Switzerland. 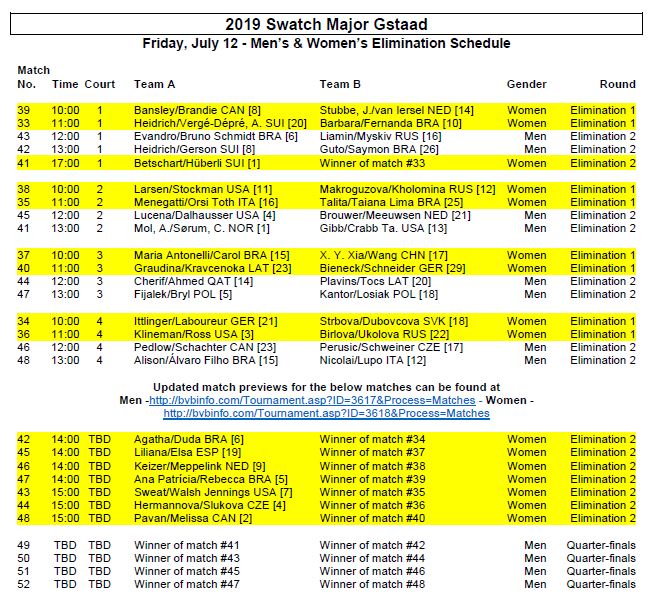 The Czech Republic, Germany, Italy, Latvia and Poland have two duos each left in the Swatch Major Gstaad with one team each from China, Norway, Qatar, Spain and the Slovak Republic still competing.
"The cowbells are iconic and every player on the tour wants to receive one," said six-time Swatch Major Gstaad winner Kerri Walsh Jennings, who is competing in her 15th event in the Swiss Alps village where the tournament started in 2000 for women and 2001 for men.
Walsh Jennings and her partner Brooke Sweat are in contention for the cowbells as the seventh-seeded American pair will play either 16th-seeded Marta Menegatti/Viktoria Orsi Toth of Italy or 25th-seeded qualifier Talita Antunes/Taiana Lima of Brazil in the second-round of elimination Friday afternoon.
Defending Swatch Major Gstaad champions Anders Mol/Christian Sorum of Norway and Melissa Humana-Paredes/Sarah Pavan of Canada are still competing along with the 2018 bronze medal winners Daniele Lupo/Paolo Nicolai of Italy and Heather Bansley/Brandie Wilkerson of Canada.
The top-seeded Mol and Sorum, who won six more gold medals on the FIVB World after being successful for the first-time in Gstaad, meet 13th-seeded Taylor Crabb and Jake Gibb Saturday afternoon.  It is a rematch of the 2018 Gstaad semifinal here the Norwegians won a three-setter with Gibb and Crabb.
The second-seeded Humana-Paredes and Pavan, who captured the women's gold medal at the 2019 FIVB World Championships in Hamburg, Germany, earned a first-round bye and will be challenged Friday afternoon by either 23rd-seeded qualifiers Tina Graudina/Anastasija Kravcenoka of Latvia or 29th-seeded qualifiers Victoria Bieneck/Isabel Schneider of Germany
With only two of the top-24 seeds out of the women's competition, the men's field will be missing seven of the top-24 pairs highlighted by the early departure in elimination for the second- and third-seeded teams from Russia along with seventh-seeded Adrian Gavira and Pablo Herrera of Spain.
Thursday's biggest upset saw 26th-seeded qualifiers Saymon Barbosa and Gustavo "Guto" Carvalhaes of Brazil eliminate second-seeded and newly-crowned FIVB world championships Viacheslav Krasilnikov/Oleg Stoyanovskiy of Russia with a 2-0 (23-21, 21-19) win in 38 minutes.
Saymon and Guto had to win a Brazilian country quota match Monday along with two qualifying wins Tuesday to advance to the Swatch Major Gstaad where the Brazilians split a pair of pool play matches with teams from Spain and Italy before ousting Krasilnikov and Stoyanovskiy. 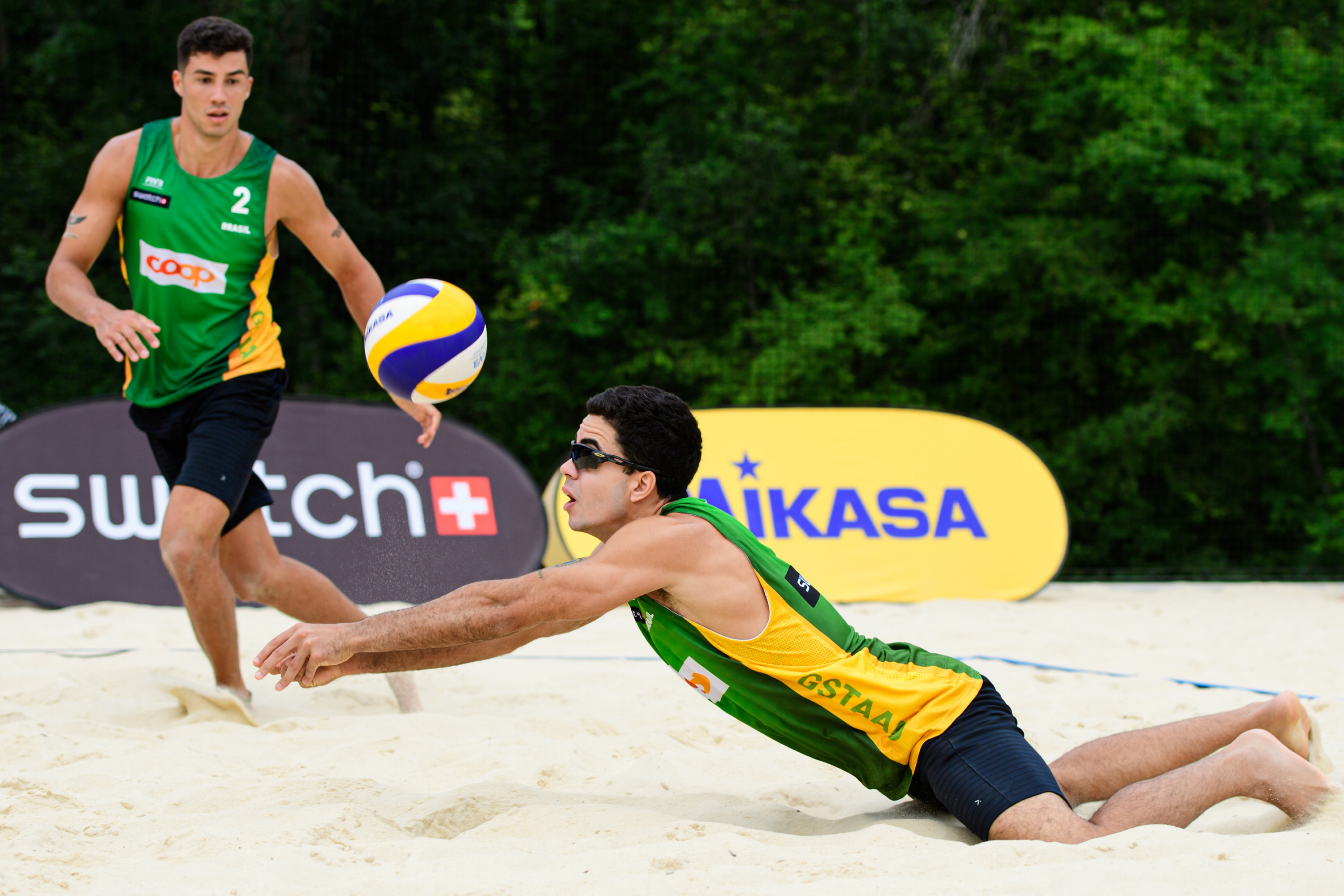