Following an open bidding procedure that closed on 11 November 2019, Italy became the next country to host the prestigious 2020 VNL men’s finals, after France and the United States, in 2018 and 2019 respectively.

The Organising Partner throughout the tournament will be RCS Sports & Events, the sports & media company controlled by RCS Media Group, that has over 30 years' experience as a specialist in creating and managing national and international sporting events. Among the most active players in the sports sector, RCS Sports & Events will now add a new event to its large portfolio of world-level successes, which includes the Giro d'Italia cycling race, the Milan Marathon and the Abu Dhabi Marathon. 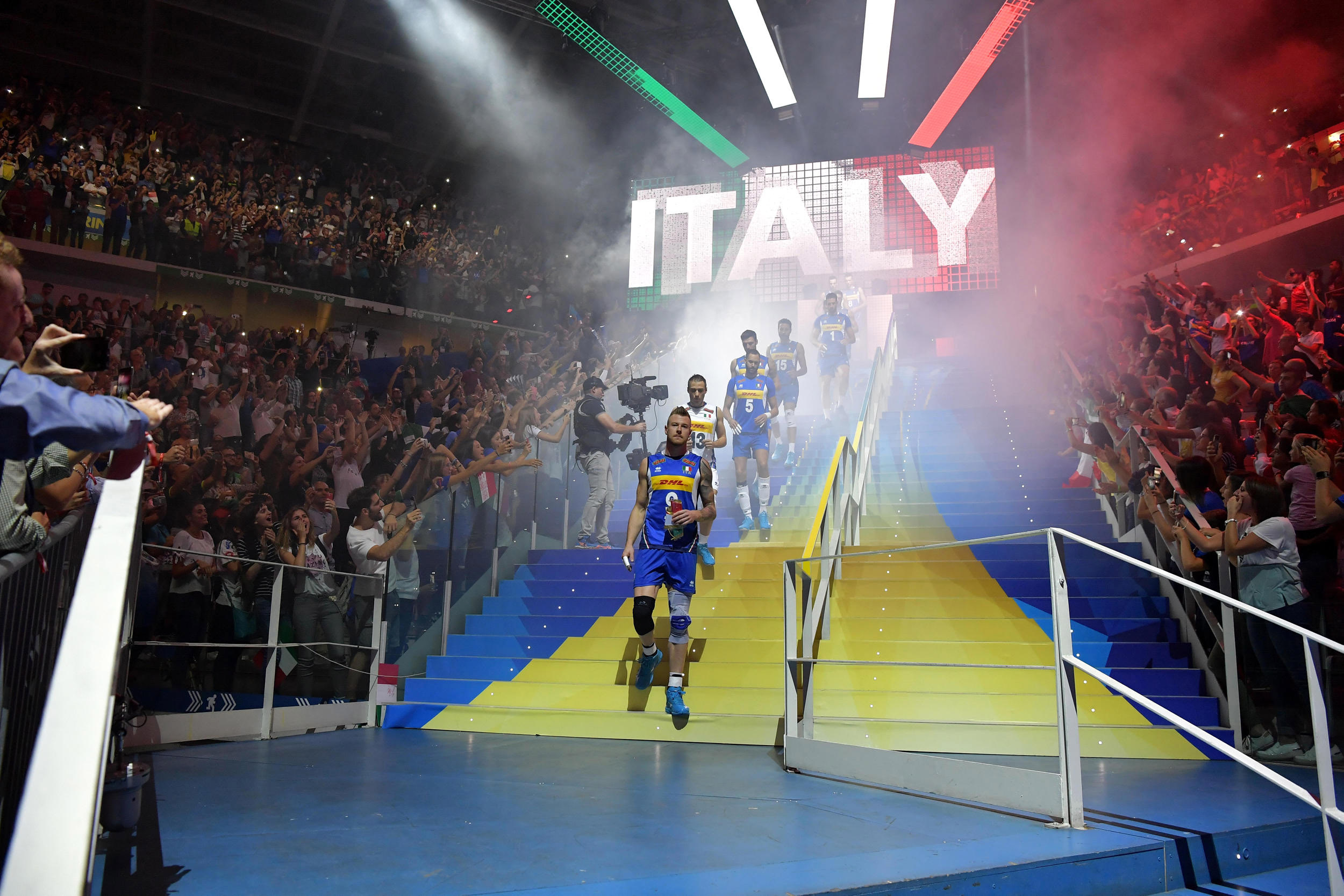 Italy captain Ivan Zaytsev leads his side into the stadium.
For the 2020 VNL men’s finals, RCS Sport & Events will manage the organisation and communication through its media platform and activation of partnerships throughout the territory.
The event will be played in the Piedmont capital at the Pala Alpitour arena, the same 13,000-seat facility that hosted the FIVB Volleyball Men's World Championship in 2018.

The sports palace is renown for its fantastic atmosphere and has been the venue for several international sporting events: ice hockey at the 2006 Olympic Winter Games in Turin, the 2007 Winter Universiade, the 2016 Olympic Basketball Qualifying Tournaments and, from 2021 to 2025 it will host the ATP tennis finals.

Following the announcement, the FIVB President Dr Ary S. Graça F° declared:
"I am pleased to announce that the next round of VNL men’s final will take place in Turin, Italy. Italy is a country with a strong tradition in volleyball, and I am happy to see that this tradition is thriving! After witnessing the supporters' passion at last year's FIVB Volleyball Men's World Championship, and naturally the wonderful finals of the World Beach Volleyball Tour in Rome earlier this year, it is clear that a growing number of volleyball fans in Italy are eager to attend live competitions."

Pietro Bruno Cattaneo, FIPAV President, said:
"The Italian Volleyball Federation is pleased to know that the VNL 2020 men's finals will be played in Turin, as the FIVB informed us today. I am sure that the Piedmont capital and Pala Alpitour will be worthy of this event. Indeed, we all carry in our minds the extraordinary success with all the fans at the Volleyball Men's World Championship in 2018."

The Governor of the Piedmont Region, Alberto Cirio, and the regional minister for Sports, Fabrizio Ricca stated:
"It is a great honour for our Region to host the 2020 Volleyball Nations League (VNL). We believe that sporting events at this top level are good not only for sports, but also for the whole local economy. The Piedmont is ready to welcome all the athletes who arrive here, to help them discover the beauty of our territory and our organising capacity."

Chiara Appendino, the Mayor of Turin, stated:
"It is such an honour to hear this announcement. The City of Turin, which already hosted FIVB Volleyball Men's World Championship in 2018, will certainly be able to bring the best out of such a prestigious event. Thus, once again, Turin affirms itself as a sports capital and international reference for so many disciplines. I extend my thanks to the FIVB and to everyone who helped achieve this extraordinary result. My thanks as well to all who will be working towards the success of this event."

Urbano Cairo, Chairman of RCS Media Group, highlighted:
"Volleyball is one of the most practised sports in Italy. It is a true pleasure to participate in organising such an important event in a city like Turin and its region, the Piedmont, where volleyball enjoys a large following and, has been growing for several years now, for both men and women. I am certain that once again, Turin, a city known for its passion for sports, and all of Italy, will display its enthusiasm."

Paolo Bellino, General Manager of RCS Sports & Events, added:
"In the Olympic year, we are returning to Turin with the most important tournament for countries with their eyes on Tokyo 2020. It will be a crucial test providing a preview of the teams and players who, shortly after, will compete for Olympic gold medals. We will organise five days of sports that will spark the enthusiasm of the countless volleyball fans in Italy and throughout the world."