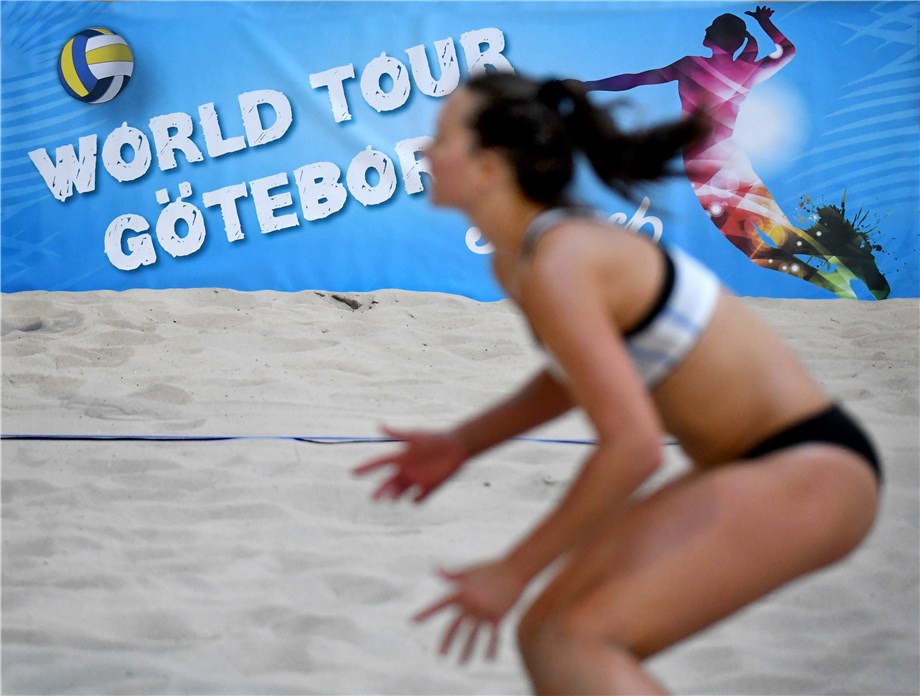 Gothenburg, Sweden, April 19, 2019 – Two teams from the Netherlands and one each from Norway and Ukraine won their pools at the women’s draw of the one-star stop on the FIVB Beach Volleyball World Tour in Gothenburg, advanced directly to the quarterfinals and are waiting to find out the names of their opponents to emerge from the first elimination round on Saturday. 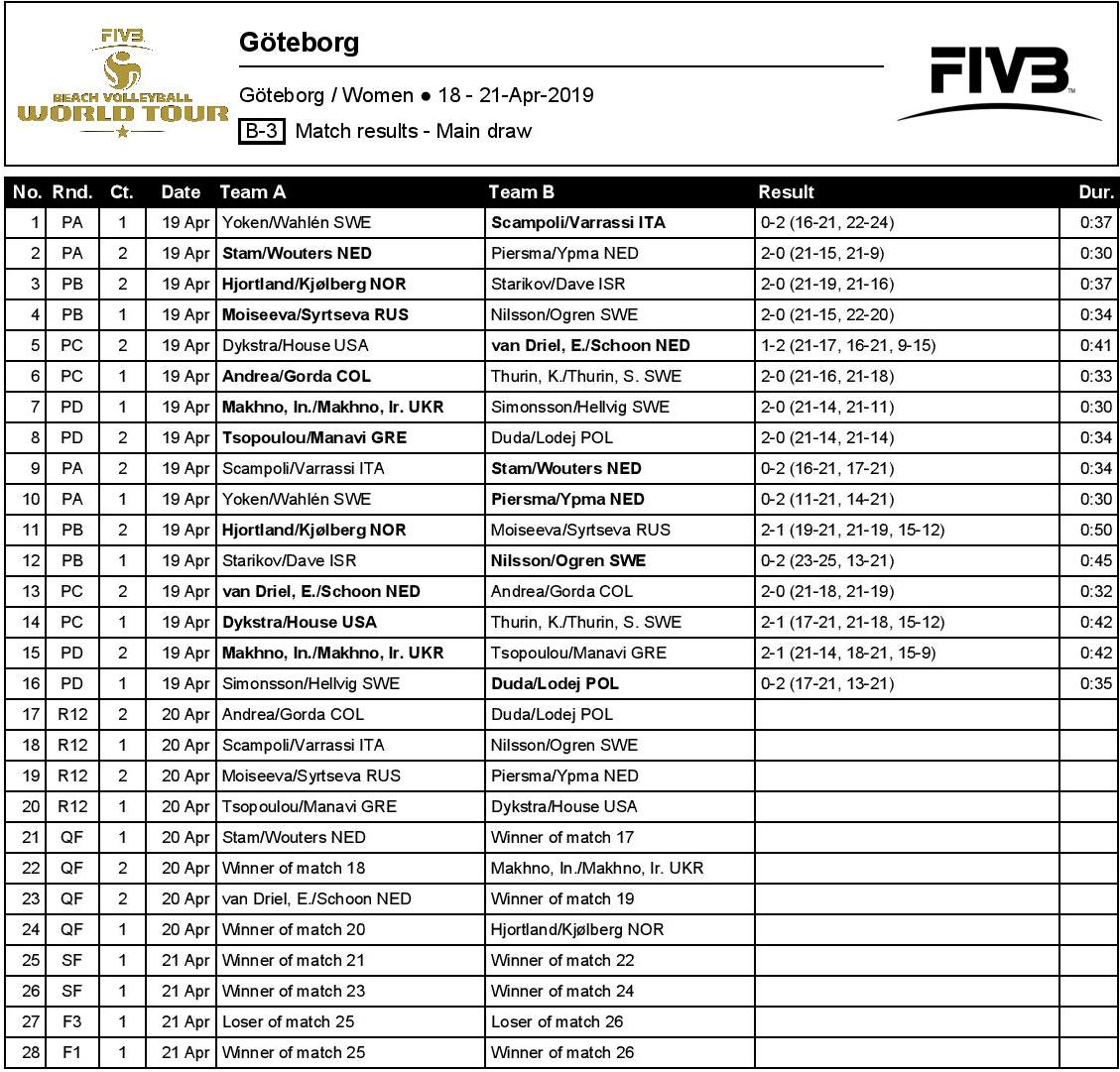 Dutch wild cards Emi van Driel and Raisa Schoon were the lowest ranked team to win their pool at the indoor Beach Center in Sweden. The 14th-seeded duo started their Pool C campaign with a 2-1 (17-21, 21-16, 15-9) upset of third-seeded Lara Dykstra and Cassie House of USA before mastering a 2-0 (21-18, 21-19) shutout of sixth-seeded Colombians Andrea Galindo and Claudia Galindo.
The battles in Pool A got underway with an all-Dutch clash between eighth-seeded Katja Stam and Julia Wouters and ninth-seeded Emma Piersma and Pleun Ypma. Stam and Wouters cruised to a speedy 2-0 (21-15, 21-9) straight-setter and later followed up with a 2-0 (21-16, 21-17) win over Italy’s Claudia Scampoli and Dalila Varrassi to book their spot in the quarterfinals.
In Pool B, second-seeded Ane Guro Tveit Hjortland and Victoria Faye Kjolberg did not allow any surprises. They claimed a 2-0 (21-19, 21-16) win over Israel’s Sofia Starikov and Anita Dave in the first leg, but faced a much tougher challenge in the pool final against Russia’s Alexandra Moiseeva and Ekaterina Syrtseva. After 50 minutes of play in what was the longest running match of the day, the Norwegians came out on top with a 2-1 (19-21, 21-19, 15-12) victory.
In a similar fashion, fourth-seeded Inna Makhno and Iryna Makhno hammered out a 2-0 (21-14, 21-11) shutout of Sweden’s Sigrid Simonsson and Hanna Hellvig, but had to wait for the tie-breaker to overcome the resistance of Greece’s Konstantina Tsopoulou and Dimitra Manavi on the way to a 2-1 (21-14, 18-21, 15-9) win. 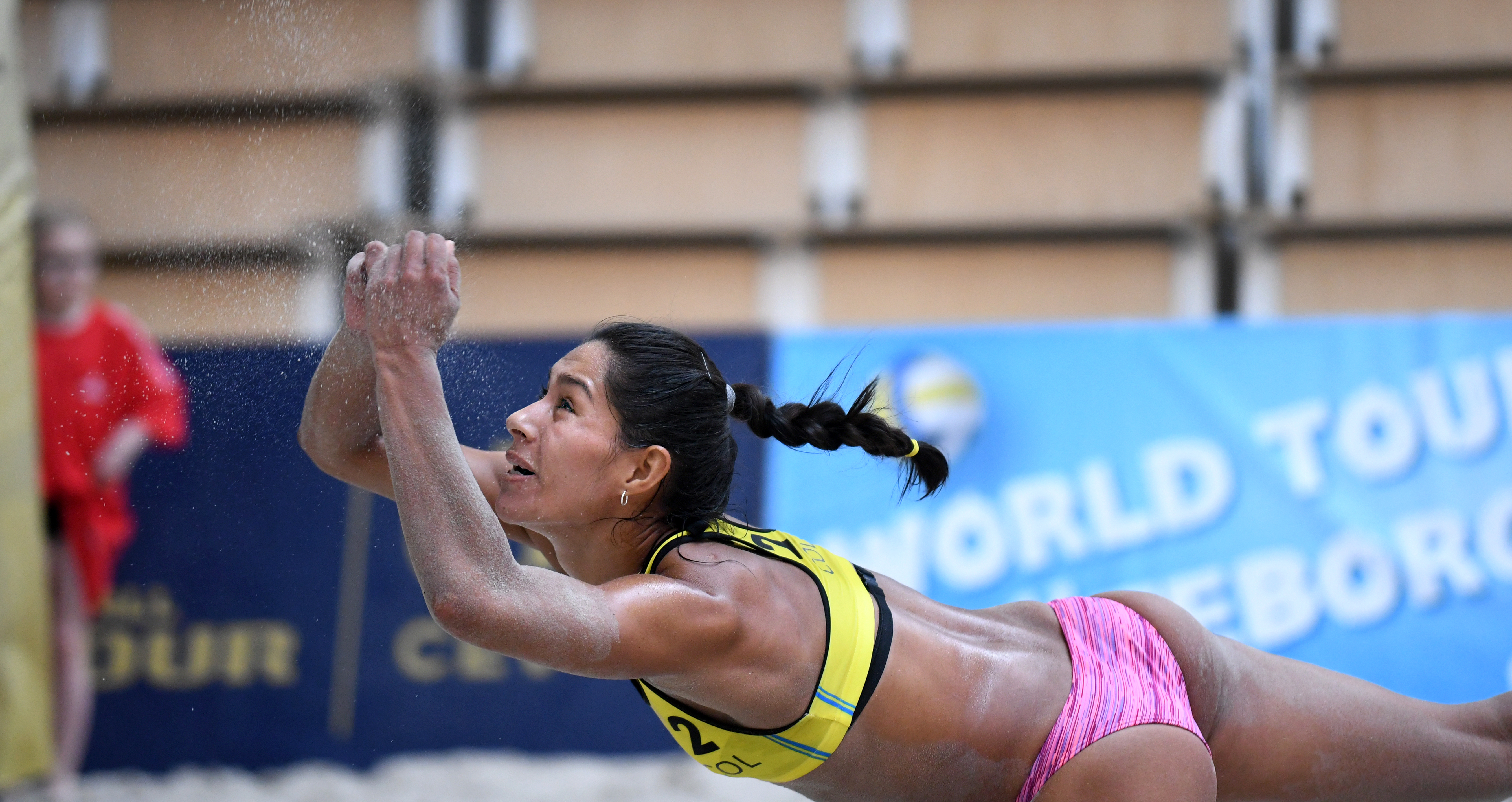 Colombia’s Claudia Galindo will be in action again on Saturday
The teams from Colombia, Greece, Italy and Russia, who advanced to the first elimination round as pool runners-up, will face third-placed pairs from the Netherlands, Poland, Sweden and USA in the battles to determine the remaining quarterfinalists.
The first women’s elimination matches will start at 12:30 local time on Friday. All games of the tournament in Gothenburg are streamed live on EuroVolley.tv.
Quick links - Beach volleyball:
FIVB Beach Volleyball World Tour - GothenburgFIVB.com - Beach volleyballFacebookTwitterInstagram