Doha, Qatar, October 15, 2019 – United States and Brazil will come face to face in the historic women’s final of the first-ever ANOC World Beach Games beach volleyball 4x4 tournament. The two sides will clash for gold at 18:15 local time on Wednesday at Katara Beach in Doha. Canada and Australia will meet in the third place match at 16:00.

Doha, Qatar, October 15, 2019 – United States and Brazil will come face to face in the historic women’s final of the first-ever ANOC World Beach Games beach volleyball 4x4 tournament. The two sides will clash for gold at 18:15 local time on Wednesday at Katara Beach in Doha. Canada and Australia will meet in the third place match at 16:00.

In the first of two women’s semifinals on Tuesday, USA outpaced Canada on the way to an emphatic 2-0 (21-11, 21-16) victory. After a one-sided first set, this all-North-American clash became quite interesting halfway through the second, when the Canadians attempted a comeback and almost caught up with opponents on the scoreboard. Not for long. USA regained control and built nicely to a comfortable closing. Canada’s Camille Saxton and USA’s Emily Hartong shared the best scorer honours with 11 points apiece.
“As the tournament progressed, we’ve gotten better and better,” said Emily Hartong. “We’ve finally figured out certain plays and set a better flow as a team. So it has become easier for us, but we definitely never underestimated the opponents. Today we did a really good job with our ball control. Geena Urango, Kelly Reeves and I in the passing line-up took care of the little touches and that makes our setter Karissa Cook’s job easier and in turn it makes all the hitters’ job a bit easier. We played Brazil already and it was a good match. They are a good team. It was a lot of fun out there despite us losing. So we are really excited about seeing them again in the final tomorrow, kind of changing things around a little bit and seeing how it goes.” 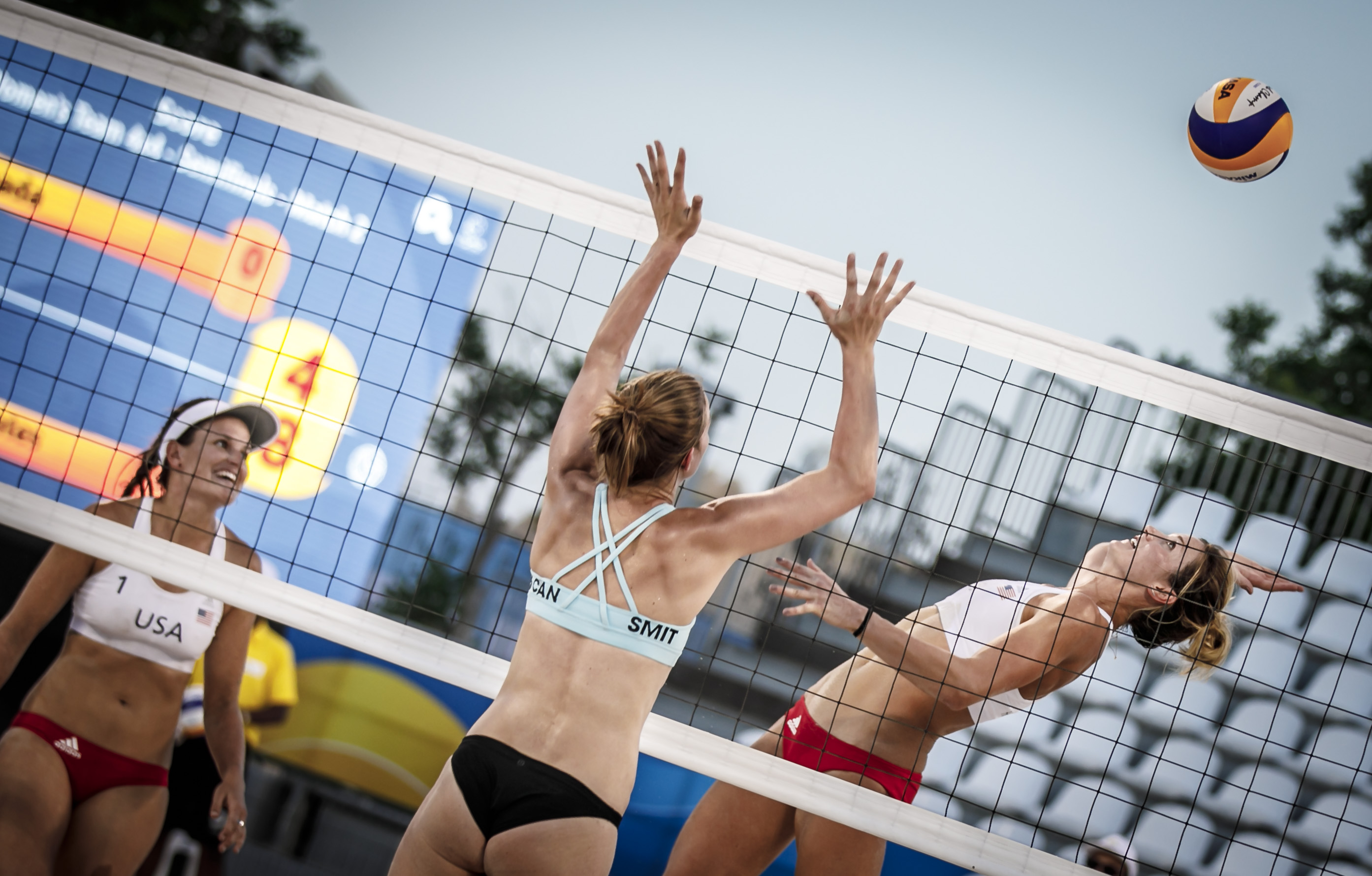 USA’s Emily Hartong attacks with a smile
Brazil left no doubts over their superiority in the first set of the semifinal match against Australia. With Carolina Horta Maximo and Fernanda Berti Alves reigning at the net, the South Americans broke away and never looked back. It was setter Rebecca Cavalcanti that finished the set off at 21-10 with a two-hand shot finding an empty spot at the back of the Australian half. The Volleyroos were no match for the stellar Brazilian line-up in the second set either. Once again, Brazil opened up a wide gap and cruised through to the 21-11 closing, shaped up by Barbara Seixas with a successful spike for the last point. Carol and Fernanda scored 11 points each to top the charts of the match.
“I am very happy about this result. A small car accident on the way to the venue gave us a little bit of stress and delayed us, so we had shorter time to warm up, but we found strength in each other. Even Juliana and Taina, who do not play all the time, help us a lot by communicating with us and this is very important,” Rebecca pointed out. 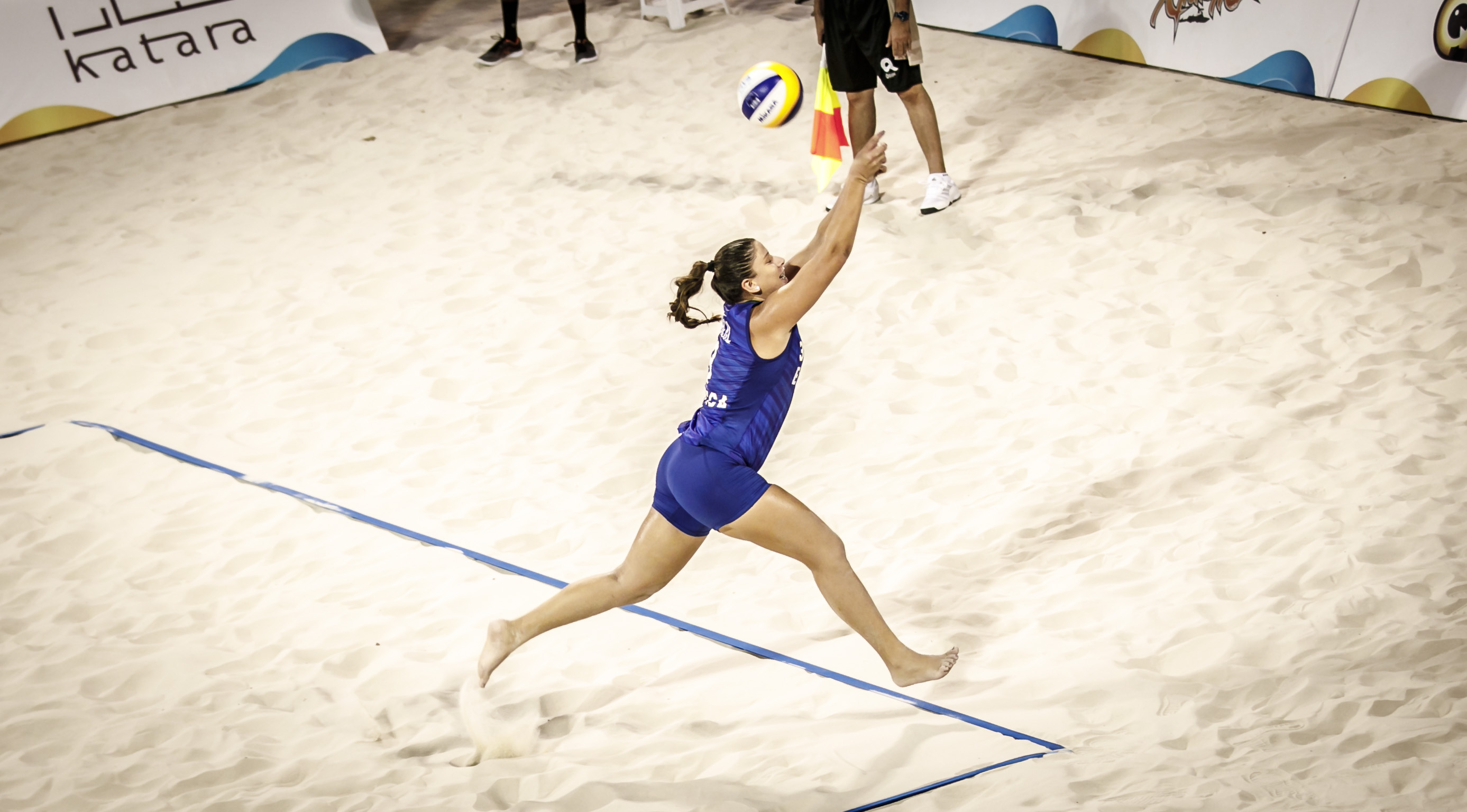