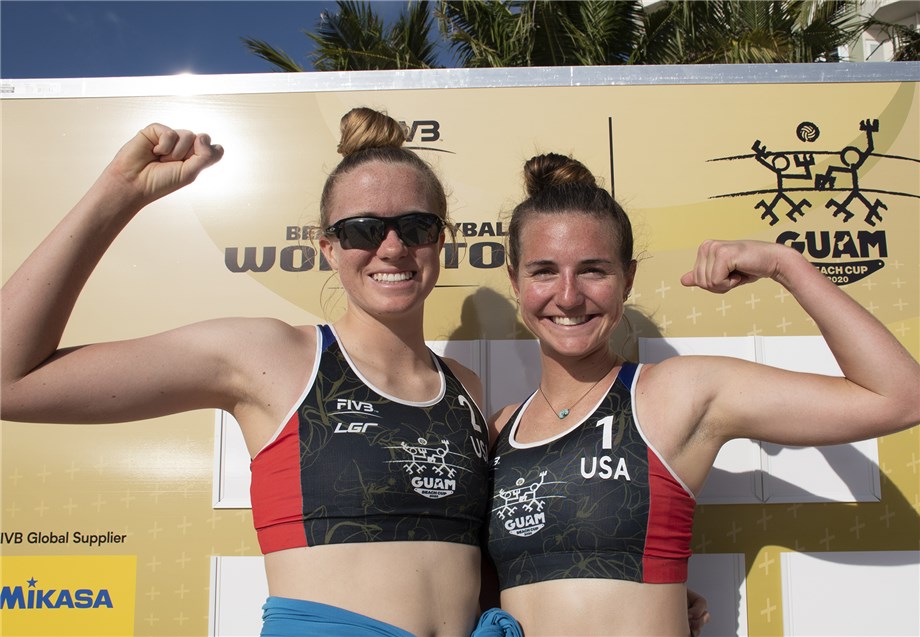 Megan Kraft (left) and Delaynie Maple (right) celebrate their victory and moving on to the main draw.

Hagatna, Guam, March 5, 2020 – Japan and USA each added two pairs to the main draw after qualification at the women’s Guam Beach Cup 2020.

The first women’s one-star event on the 2020 portion of the FIVB Beach Volleyball World Tour will see teams from Austria, Canada, Finland, Japan, Sweden and the USA take to the court alongside four pairs representing host Guam for the main draw.

Thirteen teams were thinned to four during qualification.

The USA’s Delaynie Maple/Megan Kraft dropped only one point in a two-set win over Melanie Damian/Alaunah Merto of Guam and then upset third seeds Heather Friesen/Melissa Fuchs to book a place in the pools.

Both 17 years of age, this is Maple and Kraft’s debut on the Beach Volleyball World Tour.

The second USA pair to advance was Kimberly Hildreth/Sarah Schermerhorn after a victory over Sweden’s Louise Maneskold/Jenny Stralman, 21-14 and 21-10. Hildreth/Schemerhorn finished 19th at the two-star event in Siam Reap, Cambodia in February.

Guam is the Japanese duo’s 17th appearance together on the Beach Volleyball World Tour. The pair has already won a one-star event this season – in Tel Aviv, Israel in November 2019.
Pool matches in the main draw take place on Friday, two rounds of elimination brackets on Saturday, followed by semifinals and finals on Sunday.

Two others teams from Japan are favourites when the main draw begins tomorrow.

Yurika/Chiyo came third at the two-star event in Siem Reap, Cambodia in February. They face Guam's Tylee Shepherd/Hallie Wigsten of Guam in their first match in Pool B.