USA rookie Sponcil with an open mind about her future 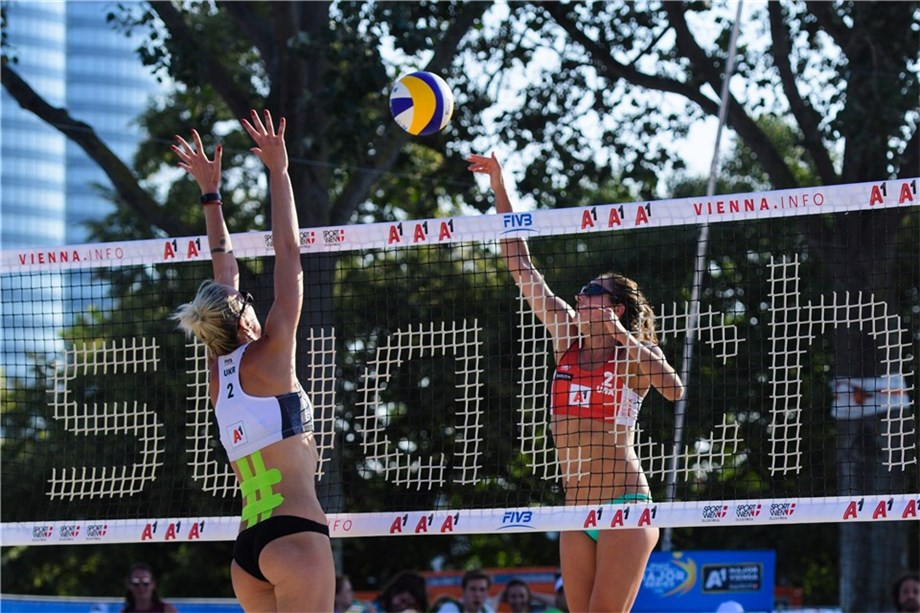 The time is coming for American Sarah Sponcil to make a decision, but first she must handle a Mikasa reception.

Vienna, Austria, July 31, 2018 - Playing too much volleyball, either on indoor courts or at the beach, has never been a problem for Sarah Sponcil. During her college time, the American standout has enjoyed successful careers in both sports, but the time is coming for her to make a decision about what the future of her career will look like.
Quick links - Beach volleyball:
FIVB Beach Volleyball World Tour - Vienna
FIVB.com - Beach volleyball
Latest Videos
Facebook
Twitter
Instagram
The 21-year-old Sponcil, who’s competing in this week’s $600,000 A1 Major Vienna presented by Swatch with Olympian Lauren Fendrick, has yet to complete her four years of eligibility in college beach volleyball with the University of California (UCLA), for which she won the national title last May, but has already set foot on the international scene with a bronze medal at the Haiyang three-star event two weeks ago with Caitlin Ledoux and a fifth-place finish in Tokyo last week.
“The atmosphere is amazing,” Sponcil said about her international beach volleyball experience so far. “Getting to play against the best is all I want, so I’m trying to learn as fast as I can. And having Lauren as my partner is amazing. I’m learning a lot from her. It’s just our third tournament together and she’s great on and off the court, so it’s been a blast. Two months ago I was doing NCAA stuff and now I’m playing in one of the greatest tournaments there is, so I’m enjoying every second.”

Her future could be headed in another direction, however, as at the same time Sponcil pursues an international career in indoor and she’s also looking forward to an opportunity to be part of the USA indoor national team. Formerly an outside hitter and a setter during her college time, the Arizona native is willing to play a different role to have a chance of joining the American squad in the future.
“If I get the opportunity to train with the USA indoor as libero I’d love to,” she added. “I don’t want to go overseas to play indoor, so the only possibility would be working it out with the national team. If I get the call it would be amazing, but I’m just taking one day at a time and I’m here now, so I’m trying to learn.”
Sponcil and Fendrick had an impressive debut at the Vienna Major qualification tournament as the Americans posted a 2-0 (21-13, 21-7) victory over Latvia’s Marta Ozolina and Agnese Caica. They will play again later this Tuesday for a main draw spot against Spain’s Amaranta Navarro and Angela Lobato.