USA team: Four-men beach is very special to us 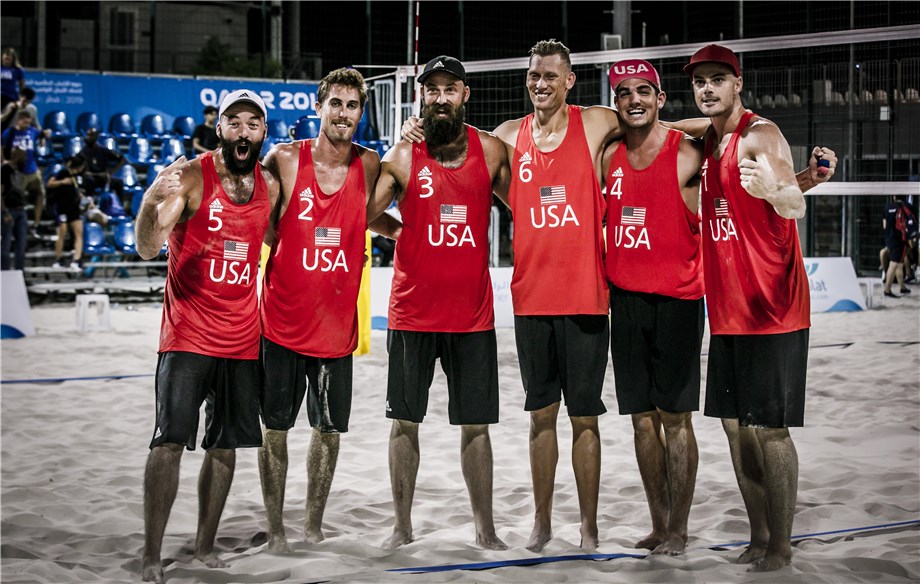 Doha, Qatar, October 15, 2019 – Casey Patterson, Taylor Crabb, Troy Field, Riley McKibbin, Maddison McKibbin and Brian Cook, or, in other words, the men’s national team of USA at the beach volleyball 4x4 tournament at the 2019 ANOC World Beach Games in Doha, were quite excited to advance to the semifinals and right after they delivered a straight-set quarterfinal victory over the powerful guys from Mozambique took time to share with fivb.com their thoughts on this version of the sand sport.
“This is a beautiful game that has a chance of becoming an Olympic sport and for us that’s very special, because the four-men is a tradition for Americans,” said 39-year-old Casey Patterson, 2016 Olympian, multiple medallist on the FIVB Beach Volleyball World Tour and a living legend on the AVP Tour in the US. “We play it all off-season; we play it on the weekends… It’s something that we do for the lifestyle side of it too – to be close to friends and family. So for us this is a very exciting time in the world of beach volleyball. And if you’ve seen the McKibbins’ videos, you know we love the four-men. We celebrate it with all our hearts! It’s very special to be here and we are very happy.” 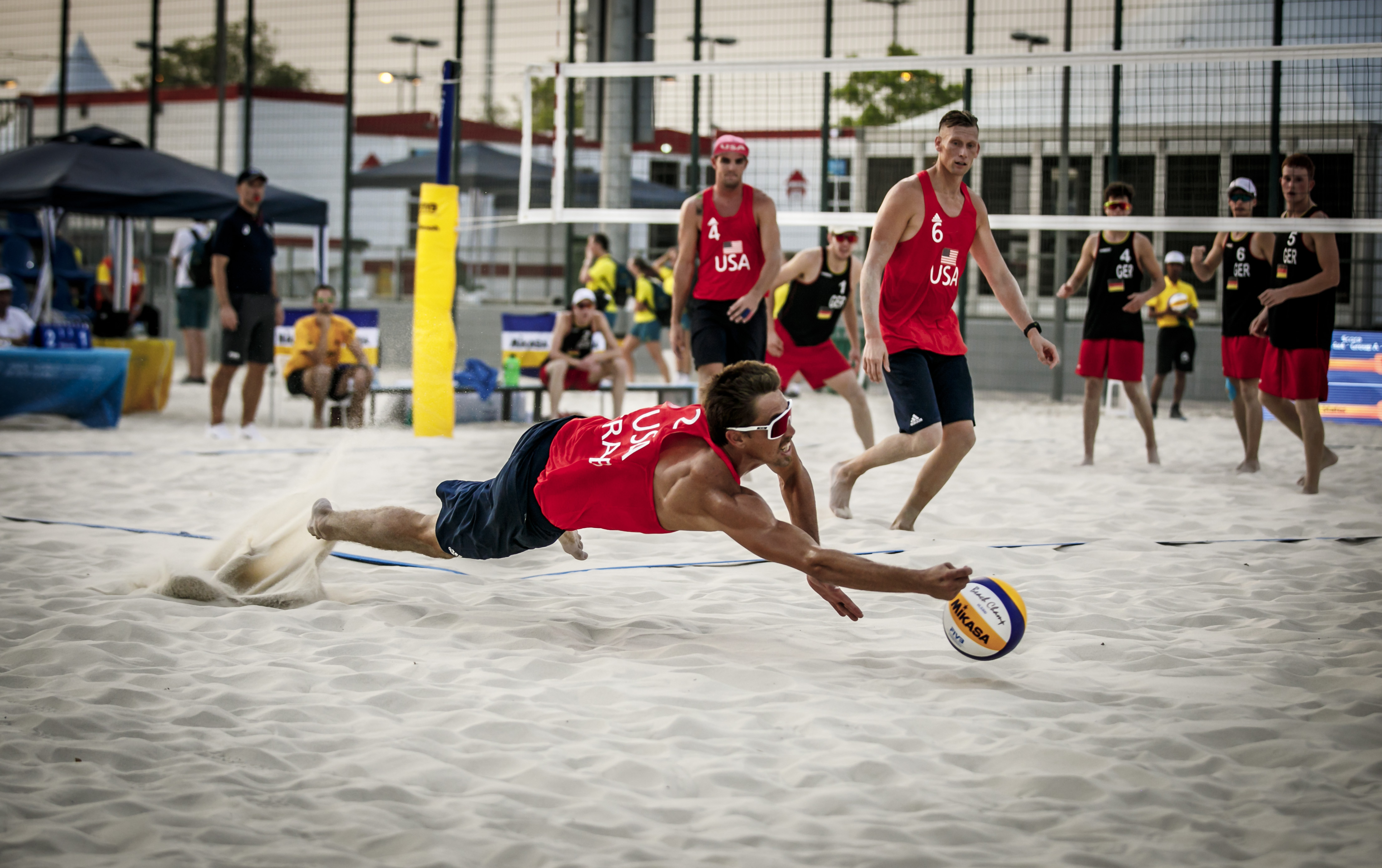 Taylor Crabb dives for the ball
“4x4 beach volleyball brings a different aspect that we are not used to seeing on the beach,” added Taylor Crabb, currently in the #13 position on the FIVB World Ranking with Jacob Gibb. “It’s a lot more physical. It’s a perfect combination between beach doubles and indoor volleyball. You still get all the different elements of being outside in the sand and in the sun, but you also get the physicalness of having four people on the court, so I think that’s a great thing.”
Patterson also ventured into recommending ways of further improving the four-a-side format. “We need to eliminate the block counting as a touch and we need to play on a big indoor-size court. The hand-setting should be more like in indoor volleyball. We’ve played it for so long that we know that would make it even better,” he explained. 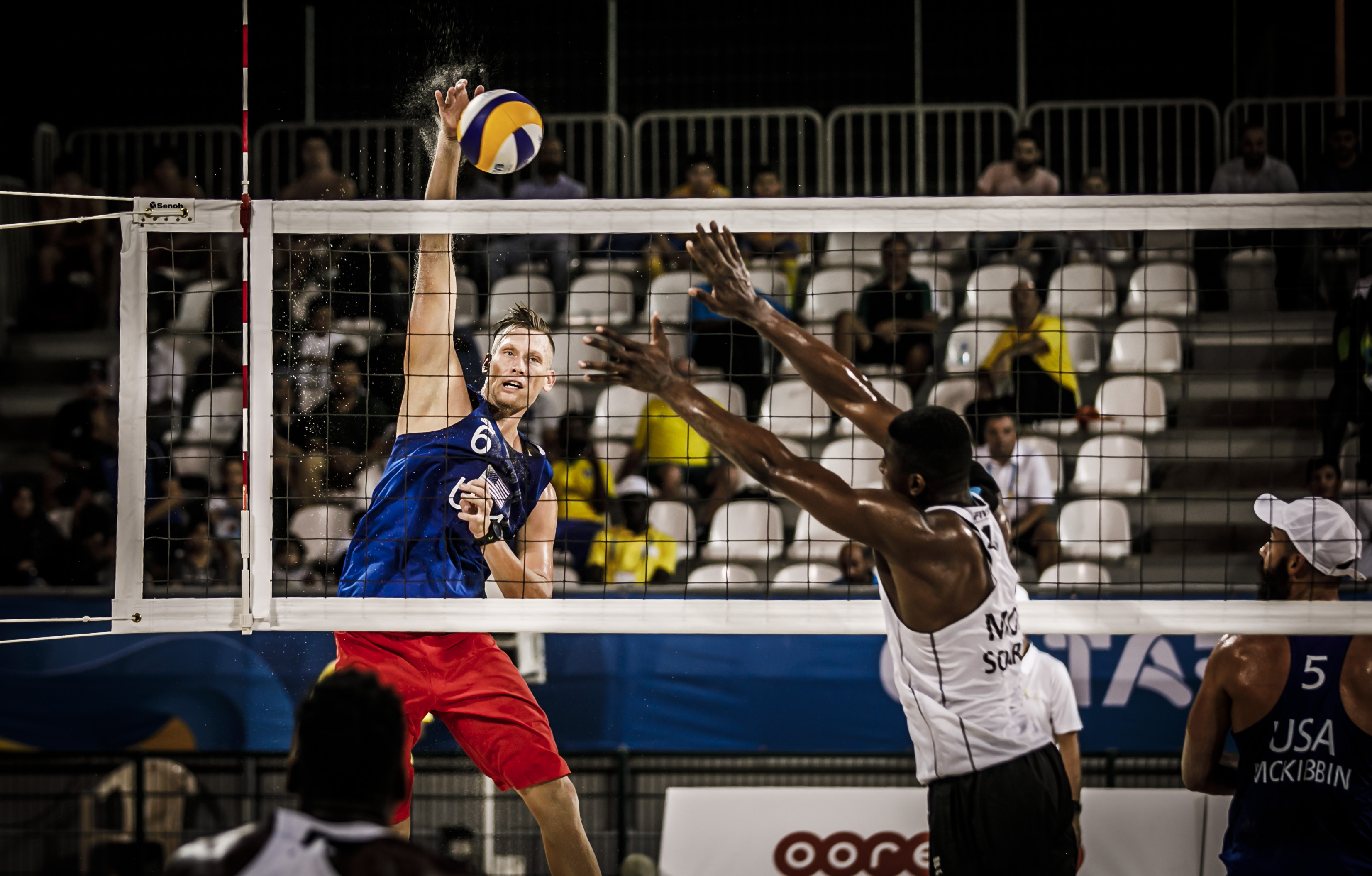 Casey Patterson in action
The McKibbin brothers and Troy Field, all well known names in the world of two-a-side beach volleyball, also made a name for themselves in the up-and-coming three-a-side winter version of the sport, winning one gold and one silver medal on the inaugural 2019 FIVB Snow Volleyball World Tour.
“I have played 3x3 on snow and 2x2 on grass, on sand and on clay and now we are playing 4x4 on the beach,” Maddison McKibbin pointed out. “The best thing about playing 4x4 is that it’s a perfect combination suitable for both beach players and indoor players. It’s a sport where it doesn’t matter if you are an indoor or a beach player; it’s easy to come out and play. You can run fast offence, you can do blocking schemes, but you also have to get your feet into use, so you have to be used to playing the beach game. All of us have played indoor and all of us have played beach, so for us – what a better opportunity!” 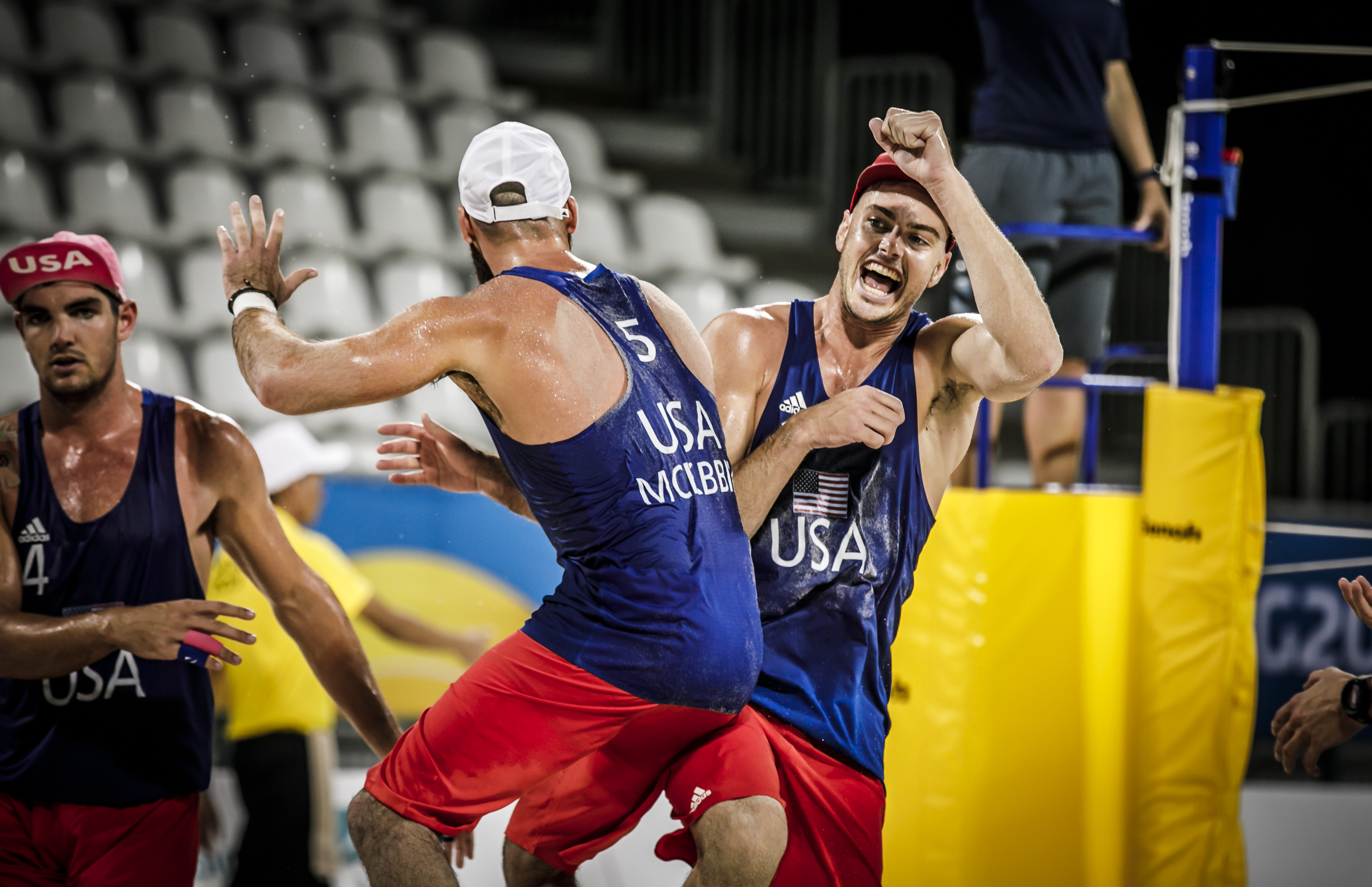 Riley McKibbin and Brian Cook having fun on the court
His older brother Riley commented on the excitement four-a-side beach volleyball brings in as much more of a real team sport. “I would say 2x2 is borderline; closer to an individual sport than to a team sport. But having more teammates – four on the court and two off the court – for sure gives it more of a team aspect and, honestly, I think it’s more fun. For us who have been playing beach for so long and we are kind of isolated, with just one other teammate, it is so nice to be on a team of six and have that team dynamic again. It’s been really fun,” he said.
“I think it gives a good opportunity for a lot of tall players and new players or young jumpers, kind of like myself, to play at a high level and play against countries that you are never ever going to play against,” Troy Field added. 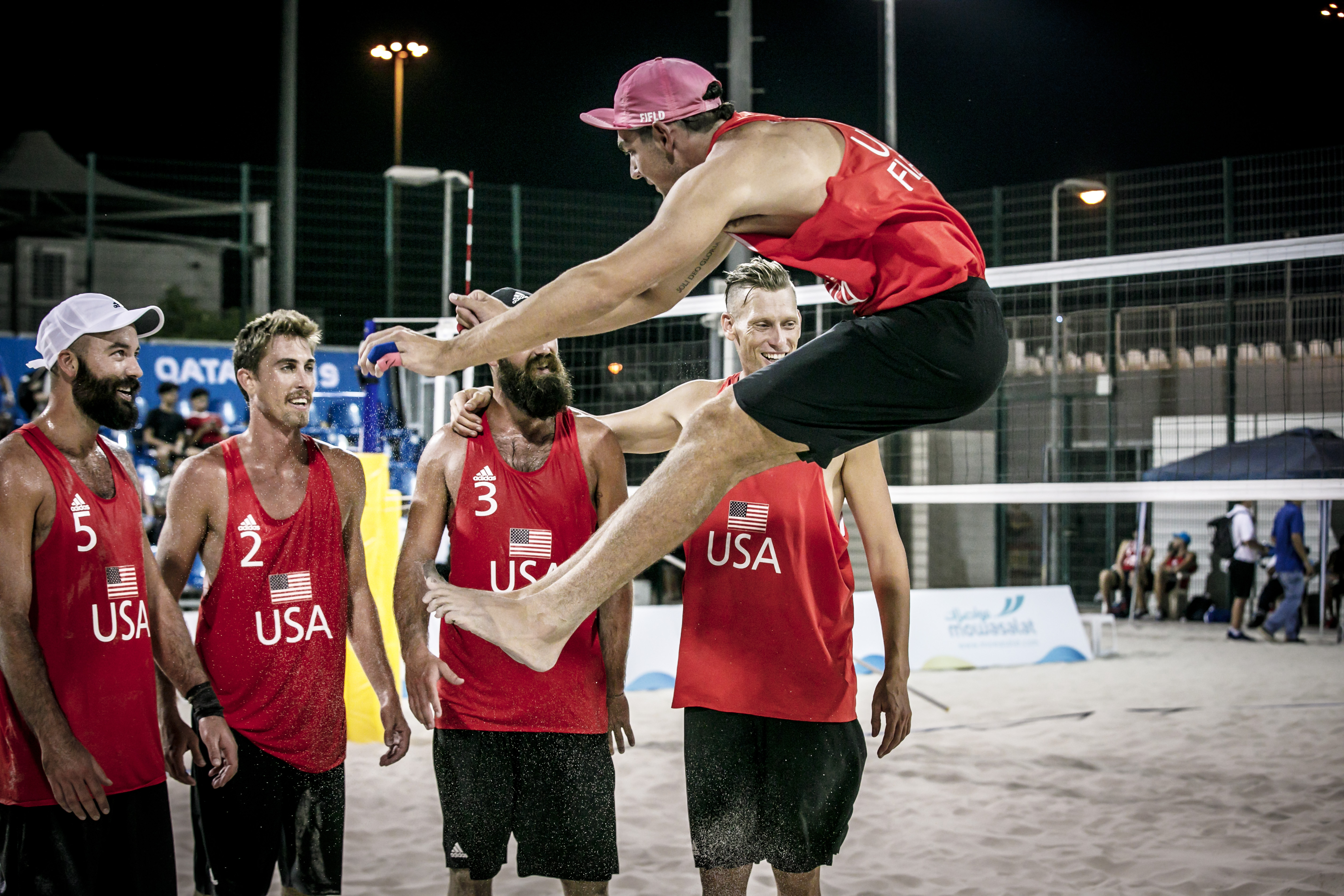 Troy Field shows off his jumping skills even after a match
Playing at an event like the World Beach Games under the name of the United States is also a real honour.
“It is always an honour to represent our country. It’s something that we are trying to do - that’s why we are in the gym every day and that’s why we play volleyball every day – ultimately to represent our country in these tournaments,” stated Brian Cook. 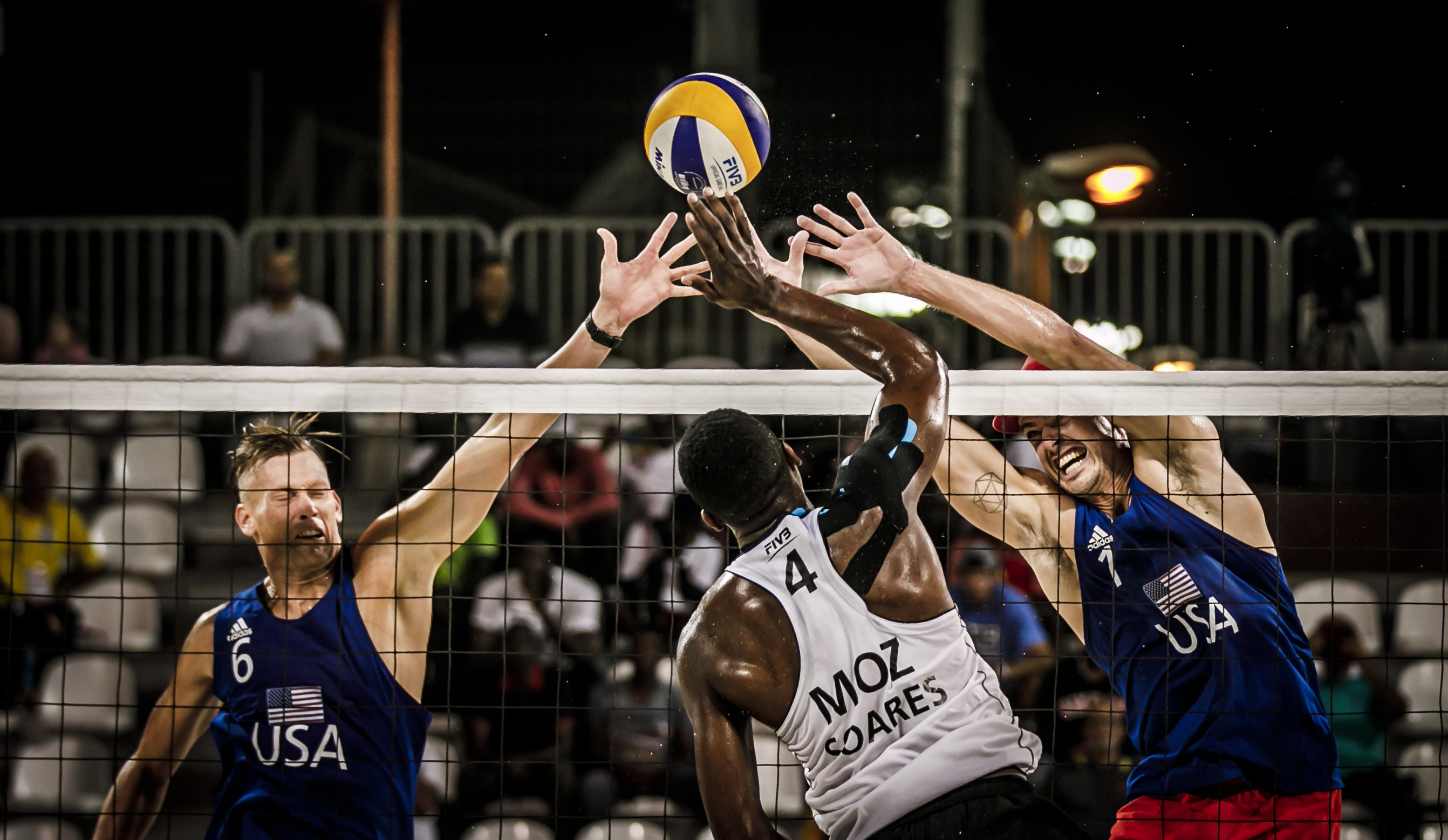 Tense blocking effort by Casey Patterson and Brian Cook
When the subject of the conversation became the tactical opportunities the 4x4 game presents, 'someone' mentioned the fact that after losing their first two matches at Qatar 2019 with Patterson setting, they switched to Riley McKibbin feeding balls to the spikers and won the following two games. Could that have been the reason?
“That is not the case, at all!” Casey was quick to react. “The sand is deeper than we expected, so it took all of us a bit longer to be physical and terminal in offence. The setting was the same!”
“Every person on this team could basically play in any position,” Riley himself supported Casey’s case. “We’ve all done it indoors, we’ve all done it on the beach – left side, right side, setter, outside hitter, opposite, etc. So it was a fine opportunity for us to play a little bit loose, not have so much expectation from ourselves and just be able to focus on the point at hand. And we’re all great players and we’re dynamic, so we can do well in any position. I think that added a different element - to our mentality more than anything…” 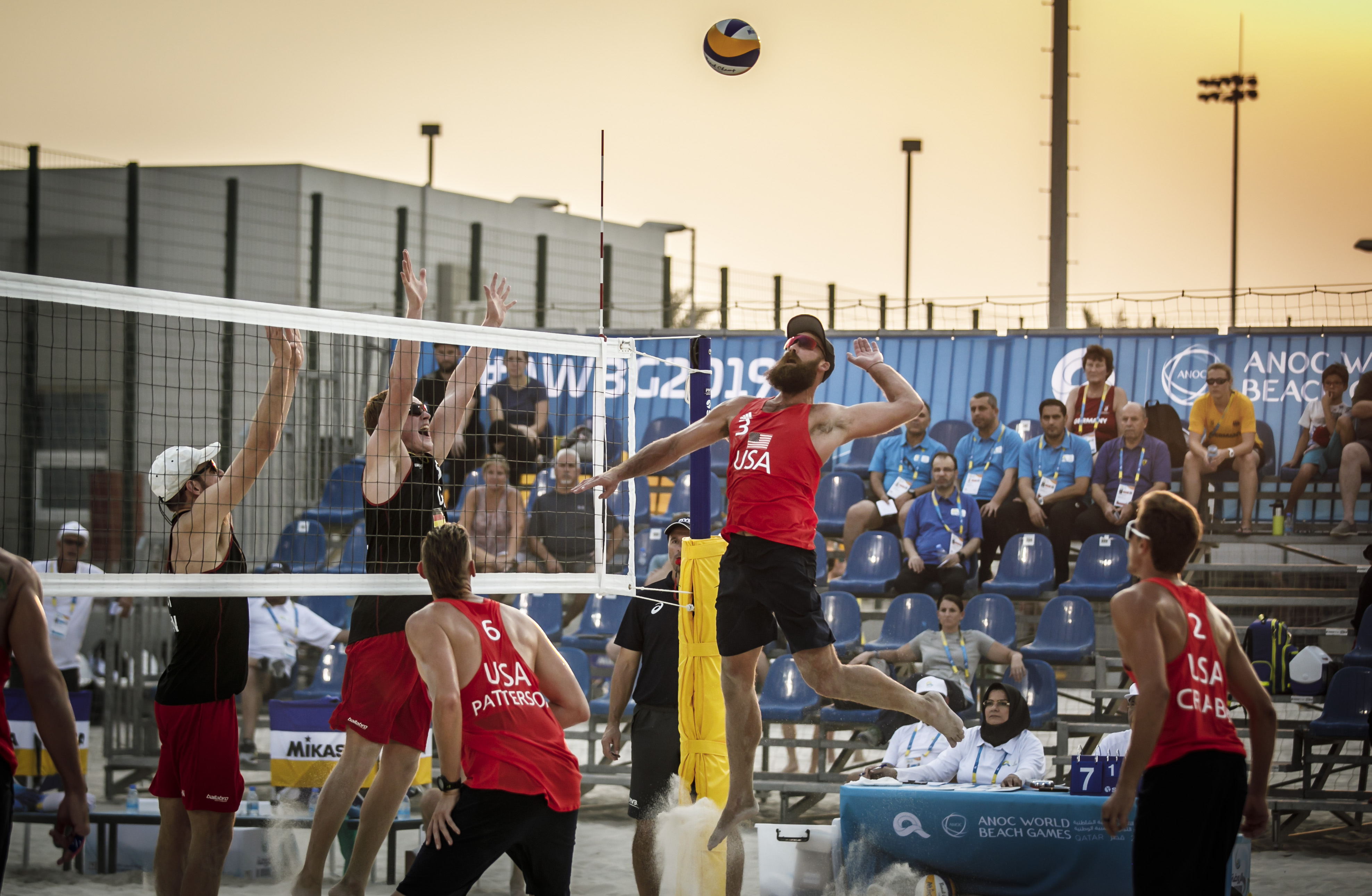 Maddison McKibbin about to hammer the ball
“We never started a match with the same line-up. We switched Casey to hitting and his passing made our offence a lot more in-system,” Maddison intervened. “You should have seen me on the practice court, dishing out sets. In fact, I should be the setter. So watch what’s coming next!”
Quick links - Beach volleyball:
Beach Volleyball 4X4 - ANOC World Beach Games
ANOC World Beach Games - Official website
Beach volleyball
Facebook
Twitter
Instagram