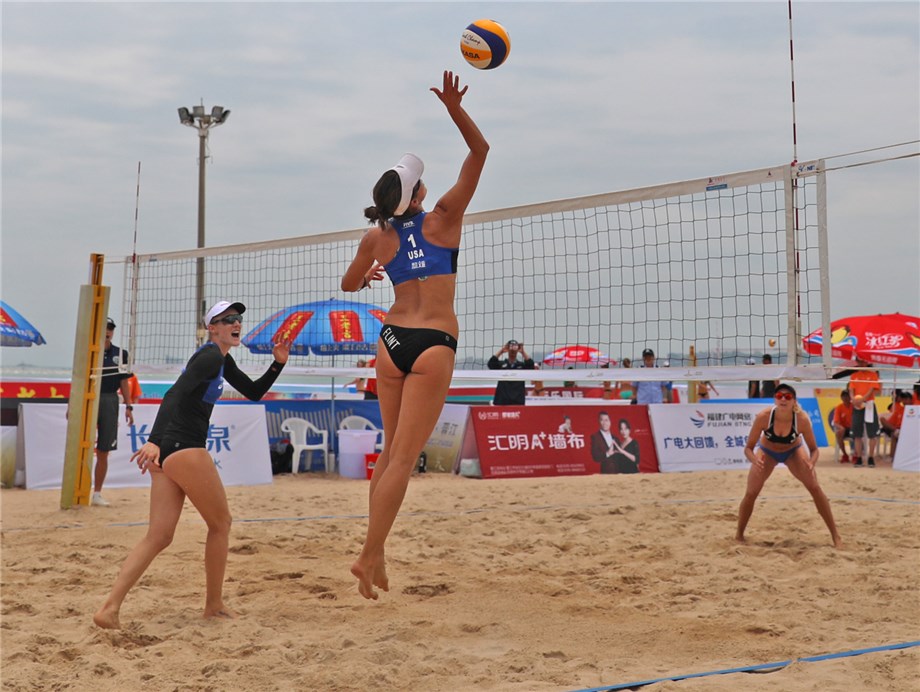 Jinjiang, China, May 23, 2019 - USA’s Betsi Flint and Emily Day made their mark on the first day of pool play at the FIVB Beach Volleyball World Tour Jinjiang 2019.
Quick links - Beach volleyball:
FIVB Beach Volleyball World Tour - Jinjiang
FIVB.com - Beach volleyball
Facebook
Twitter
Instagram
Flint/Day had a tough opener against seasoned Russian team Ekaterina Birlova and Evgeniya Ukolova. The last time the two teams met was also in China at the Qinzhou 3-Star last year with Birlova/Ukolova taking the win in straight sets.
The USA team were determined not to let it slip for a second time and turned the match around to secure their first win in Pool C, 2-1 (17-21, 21-14, 15-11).
“It’s been a little bit since we’ve been on the World Tour so I think we had a little bit of nervous jitters, but we smoothed it out. Russia’s a great team so we knew that we had to bring it, they beat us last time, so we’re happy with the win,” said Day. 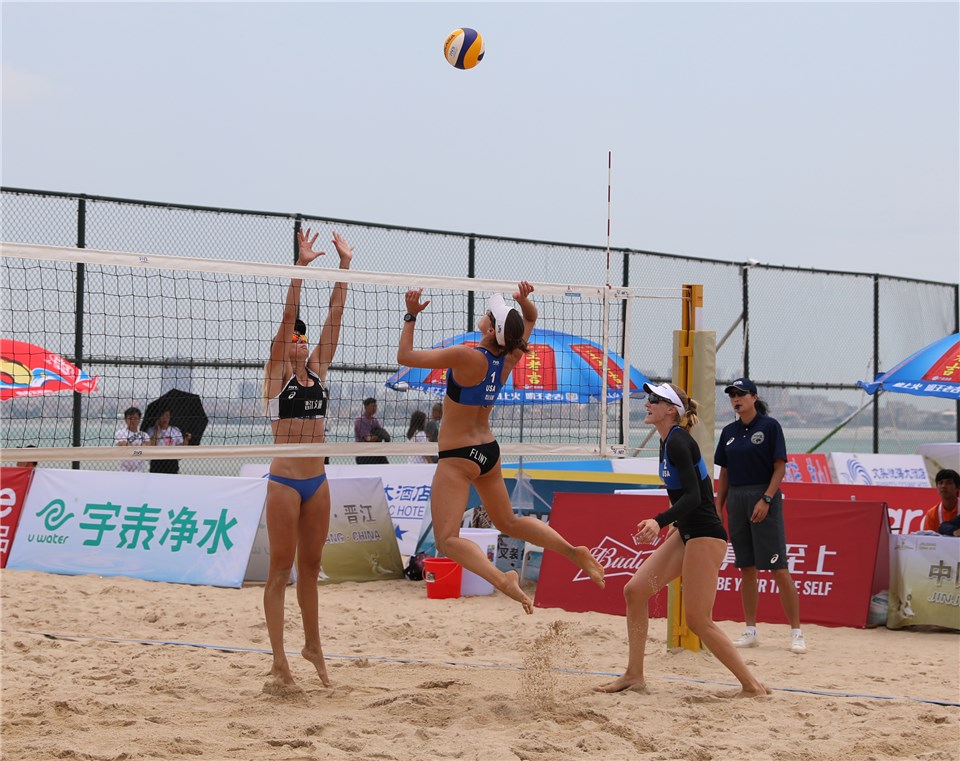 USA's Betsi Flint and Emily Day face Russia's Ekaterina Birlova
“We didn’t play as well as we wanted to but it’s nice to get a win against a really good team and we’re looking to improve tomorrow. The conditions here are great, it’s nice to play on a real beach, we have some wind and we love to play in the wind so it’s a good environment,” said Flint.
Flint and Day got together in 2018 and had previous success in China taking gold at the Haiyang 3-Star last year. Most recently they took silver at the Sydney 3-Star in March.
“We’re making improvements, it’s still the beginning of the season, but we’re really excited for where our team is going,” said Flint.
“We’re in Olympic qualification, there’s a ton of great American teams, so every tournament we’re looking to improve our ranking, so we’re looking for a good result as every team here,” said Day. 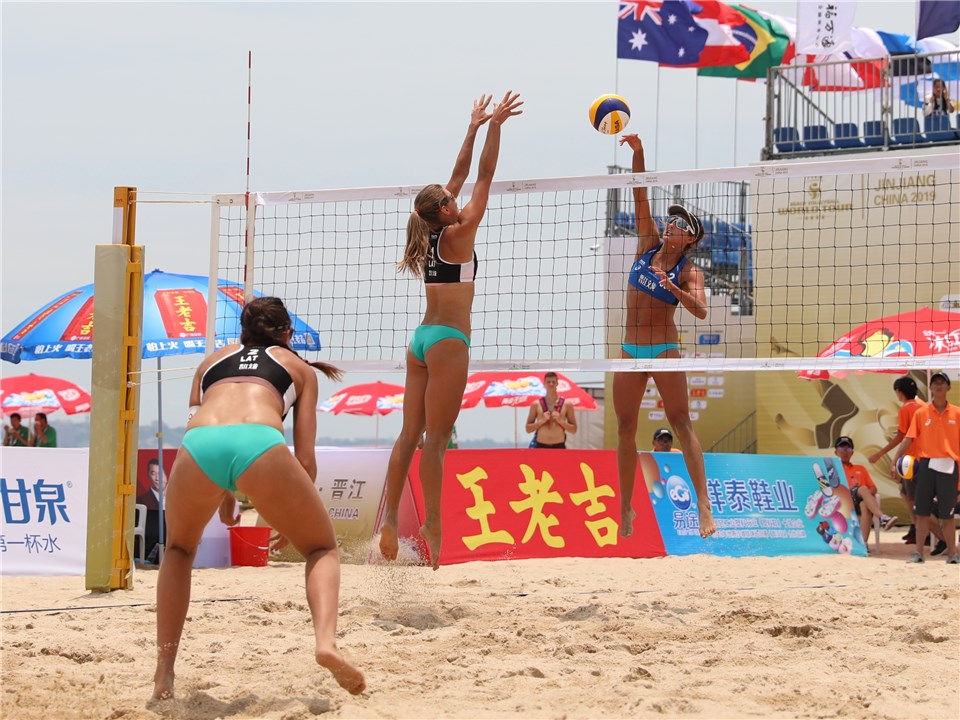 USA's Sarah Sponcil during pool play against Tina Graudina/Anastasija Kravcenoka from Latvia
The USA currently has multiple teams capable of medalling on the FIVB World Tour. Brooke Sweat/Kerri Walsh Jennings defeated Joana Heidrich/Anouk Vergé-Dépré, 2-0 (21-10, 21-18), while Sara Hughes/Summer Ross won their pool match against Thailand’s Varapatsorn Radarong/Khanittha Hongpak, 2-0 (21-13, 21-19).
Kelly Claes and Sarah Sponcil were overcome by Latvian pair Tina Graudina and Anastasija Kravcenoka, 2-0 (21-19, 21-16). They will need to beat China’s Xia Xinyi/Wang Fan to stay in contention.
Alexandra Klineman and April Ross are currently the USA’s number one team, but chose not to make the trip to China after winning the Itapema 4-Star at the weekend. 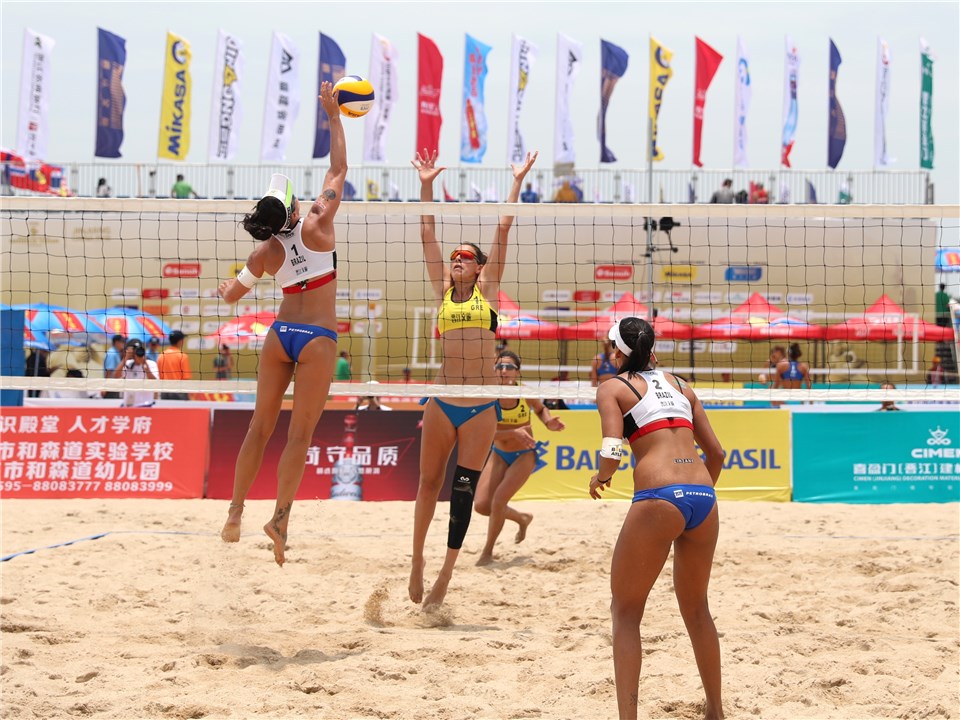