Viacheslav Krasilnikov talks about his journey 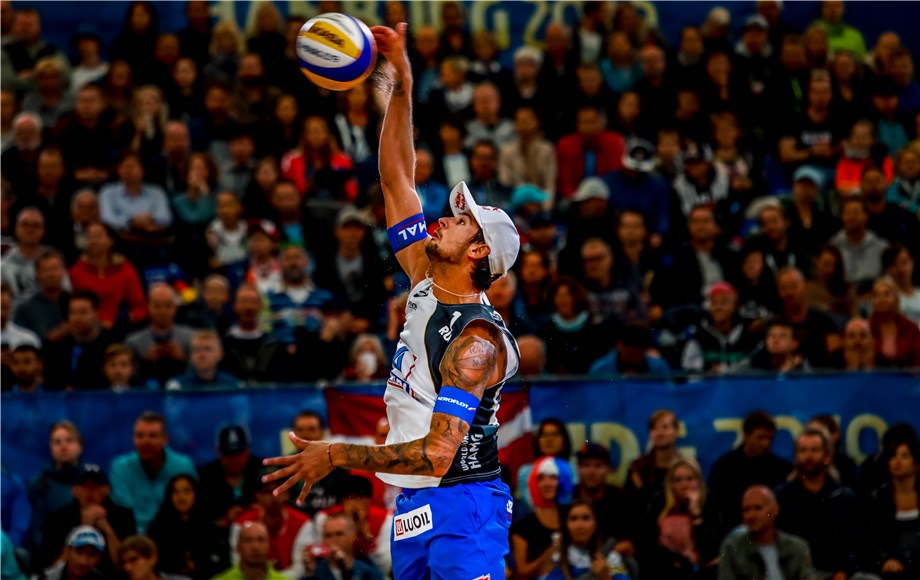 Moscow, Russia, June 25, 2020 - Viacheslav Krasilnikov spoke to fivb.com about lessons learnt on his way to becoming a world champion. The 29-year-old Russian is one of the most athletic and dynamic left side players on Tour and his partnership with Oleg Stoyanovskiy flourished as Russia roared to victory at the 2019 FIVB Beach Volleyball World Championships in Hamburg and World Tour finals later in the summer in Rome.
For ‘Slava’ and his partner Stoyanovskiy, volleyball runs in the family and both Krasilnikov’s father and grandfather were players. The defender trained throughout his youth in both indoor and beach volleyball but chose to commit to sand. He placed fifth at the FIVB Under-19 World Championships in 2009 with Artem Kucherenko before starting to play more regularly on the World Tour in 2011.
Krasilnikov then entered six events with four different partners before the 196cm tall defender teamed up with the huge 210cm blocker Konstantin Semenov and formed an incredibly physical side that would storm on to the World Tour with a silver medal in their first Grand Slam event in Berlin in 2013.
The Russian pair battled past some of the world's best and came past Americans Sean Rosenthal and Phil Dalhausser, 2013 world champions Alex Brouwer and Robert Meeuwsen from the Netherlands and also Spain’s Pablo Herrera and Adrian Gavira, before losing in the final to Evandro Gonçalves and Vitor Felipe from Brazil. 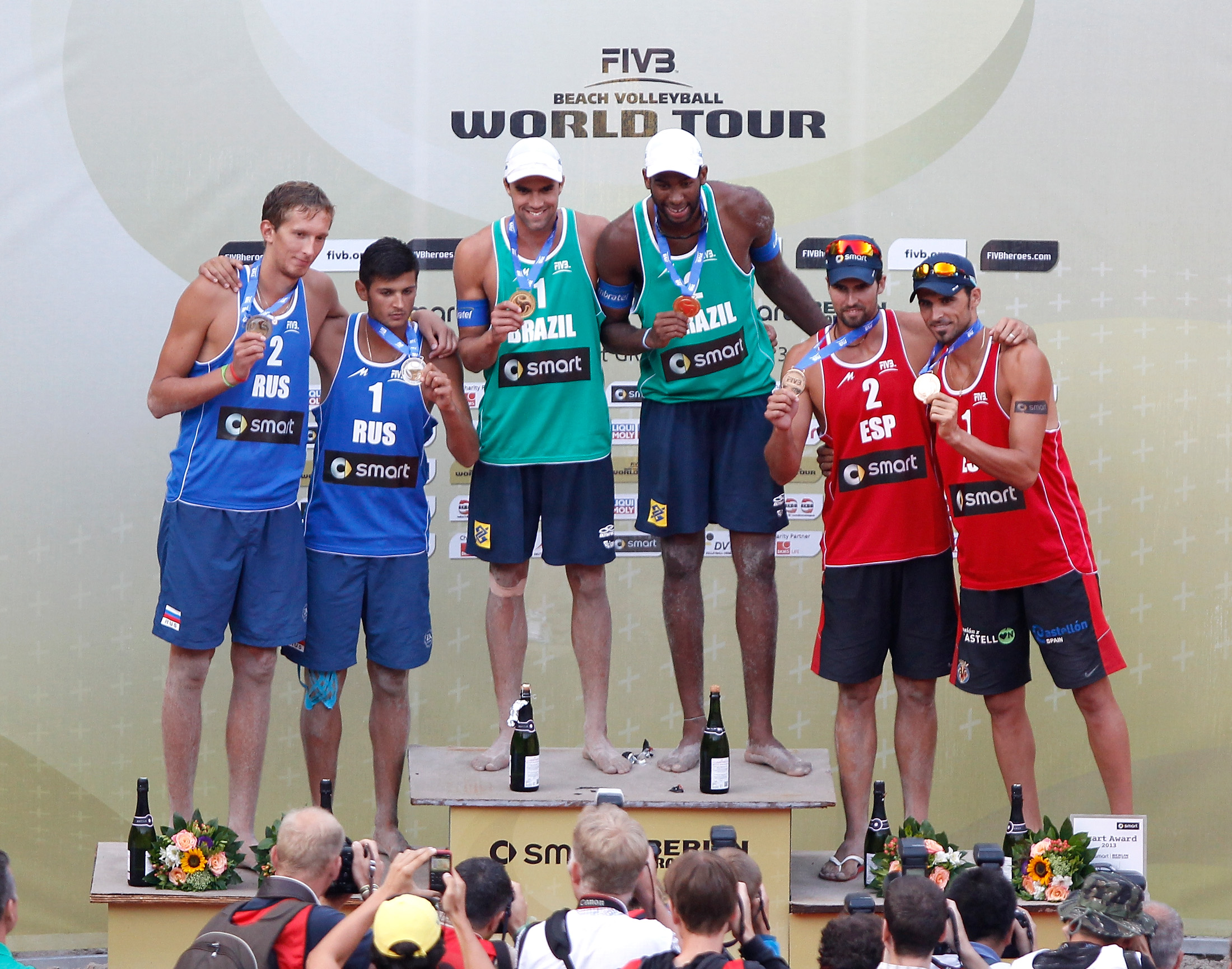 Semenov and Krasilnikov on the podium in Berlin in 2013
The partnership would continue until the Olympics in 2016 where the pair finished their playing days together with a 4th in Rio losing in the bronze medal match to Brouwer/Meeuwsen. But Viacheslav looks at those times having learnt many lessons that he can use at future Olympic Games.
“Rio 2016 was my first Olympics but I felt confident physically, technically and psychologically. My goal was to get to the Olympic Games, now my goal is to win medals at the Olympics.”
‘Slava’ was voted FIVB best defender in 2017 and may have his eyes on winning a medal in Tokyo after their World Championships win, but looks back on Rio knowing they were so close. The pair lost out to Italy’s Paolo Nicolai and Daniele Lupo in a three-set thriller and Krasilnikov feels that if they had won that game they could have gone all the way to gold.
“In the semifinals, I felt that there was one step left before getting into the prize places. That if we got to the final, no one could stop us.”
Volleyball runs deep in the history of Russia. In the beach form of the game, however, Russia have yet to win a medal at the Olympic Games and that 4th place by Krasilnikov and Semenov is as close as Russia have got to achieving that little piece of history that Russian beach volleyball are working so hard for. It evidently hurt Krasilnikov to stop at fourth, but he is certainly seeing the bright side of the team's achievement.
“It was unpleasant to leave without medals, especially at the Olympic Games for which we had been preparing for so long. Our feelings were mixed: we were upset, but at the same time we realised that we had made a big step for the development of beach volleyball in Russia. There was grief, but it also motivated me for further goals.”
“The 4th place at the Olympic Games showed that we could fight at the highest level. The motivation was maximum, and I wanted to get back to the big competitions and prove that we can be the best. The motivation is still there.” 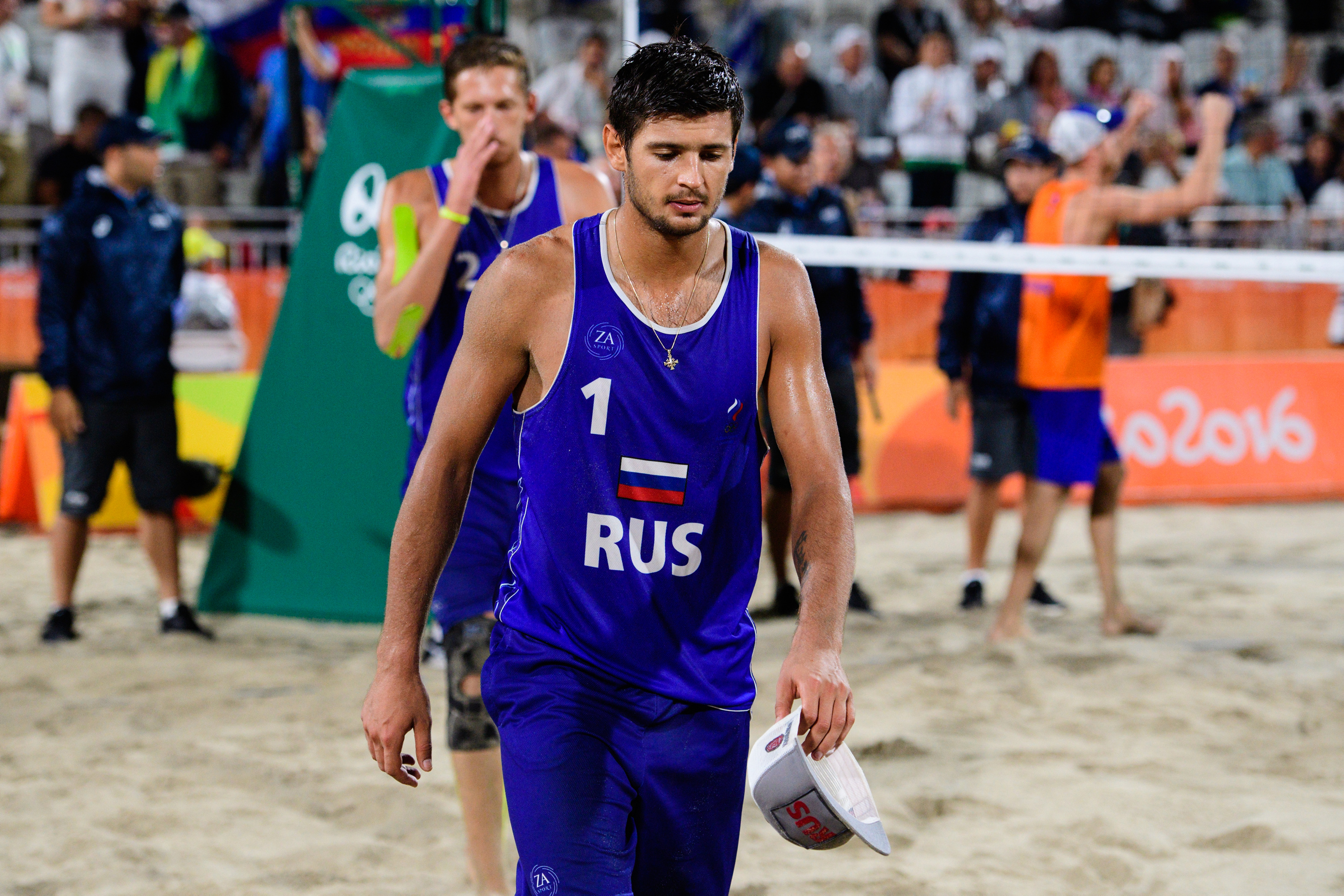 Russians Krasilnikov and Semenov disappointed after losing the match for bronze at the Rio Olympics
His relationship with Semenov was one that seemed to be on a knife edge during big moments, and when asked about this, Krasilnikov doesn’t deny the pairing had their difficulties. But they made it work by compromising.
“Kostya and I had different situations, and yes, there were difficulties in the pair, but we always found a compromise and a way out of situations.”
Fast forward four years and it is something that Slava feels has helped him to become a better player and partner.
“The most important thing I learned from Kostya Semyonov was team play. How to properly support your partner in a difficult situation. There are conflicts and misunderstandings, but at the right time you have to support your partner.”
Post 2016, the defender started a new journey with Nikita Liamin, another dynamic blocker that had transferred from the indoor game. This was  a challenge that Krasilnikov said ‘felt great’ because everything was completely new, a new partner, new training, new goals. The pair got off  to a fantastic start medalling at three 3-star events including a gold in the Hague.
2017 continued to be a very successful transition season for the pair as they took a bronze medal at the World Championships in Vienna, at the time only Russia’s second World Championship medal ever. 2018 saw a second place finish at the 4-star in Xiamen, but after that results started to weaken, leading to a new partnership for Krasilnikov with Stoyanovskiy.
In one short season, Krasilnikov and Stoyanovskiy created history by winning Russia’s first World Championship and also winning the World Tour Finals in Rome. They also won the 4-star events in The Hague and Xiamen. Krasilnikov put this this down to the ‘volleyball chemistry’ between the two.
“Oleg is a wonderful young guy - it is very comfortable to play with him. I have a very good friendship with Oleg and we feel each other on the volleyball side. My experience and his physical abilities and our aspiration to win are producing results. I had a great relationship with all my partners, but with Oleg we have a volleyball chemistry.”
The World Championship victory will be remembered by Russia, their team and their fans for a very long time and for Krasilnikov it was another sign that he has moved forwards and onwards from the disappointment of the fourth at the Rio Olympics.
“When we won the World Championship, there were no thoughts from the last Olympics, because it was a new stage in my life and with a new partner, Oleg Stoyanovsky. I’m going to the next Olympics and I believe that past failures should be forgotten and we should move on.”
“Slava in 2013 was a young player who got into the elite of beach volleyball and was just gaining experience. Slava in 2020 is an experienced player who knows all the nuances, how to prepare, how to set goals and how to achieve them.”
When the FIVB World Tour starts again, there will certainly be many eyes on the development of Krasilnikov and Stoyanovskiy as they look to build on an excellent 2019.