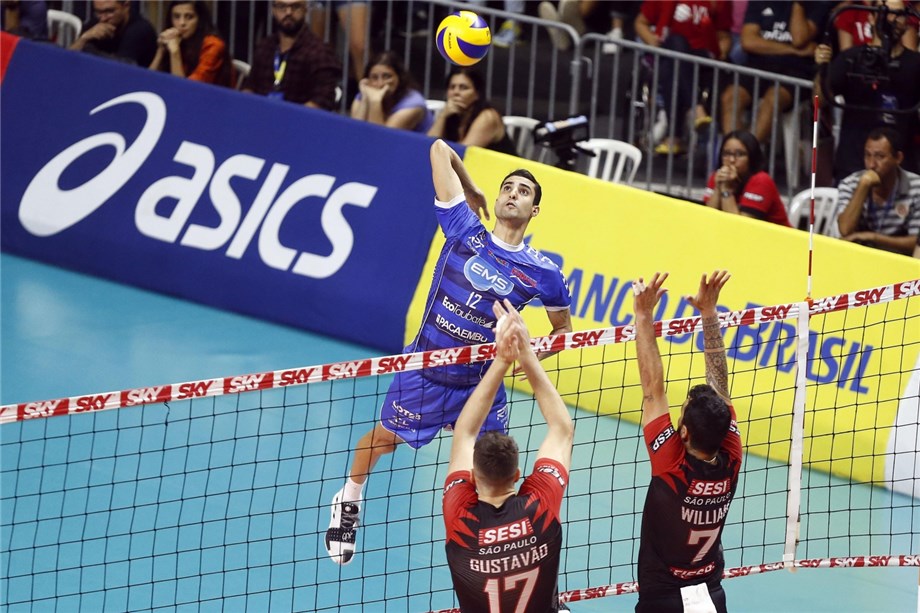 Sao Paulo, Brazil, September 11, 2020 – After six months of suspended play, volleyball is set to return to Brazil on Friday with the start of the 2020 edition of the Men’s Paulista Championship, the regional tournament of the State of Sao Paulo. The competition will feature as many as nine Olympic champions spread across the five teams in a variety of roles.
Taubate Funvic, who won each of the last six editions of the tournament and is the reigning Superliga champion, will enter this year’s event as the favourites once again due to their star-studded roster.
The team will feature a new coach in Argentinean Javier Weber, and has five members of Brazil’s Rio 2016 Olympic champion team in its squad, including recently-signed setter Bruno Rezende. The other four Olympic champions are outside hitters Mauricio Borges and Douglas Souza and middle blockers Lucas Saatkamp and Mauricio Souza.
Taubate also have other members of Brazil’s national team roster in their squad, including libero Thales Hoss and opposite Felipe Roque.
“This year’s edition will be shorter and different, but it won’t get any easier because of that,” Thales commented. “We are the favourites and need to be able to deal with it. It’s an important title for us to chase, but also a good opportunity for us to get some chemistry as a team as we’ve added several players this season.”
Taubate’s longtime rivals SESI will enter the tournament with a revamped roster after the team decided to field a young team in 2020. Outside of veteran libero Murilo Endres, a two-time Olympic silver medallist, the squad will be formed mainly by junior players, including Murilo’s nephew, 20-year-old outside hitter Eric, the son of Athens 2004 Olympic champion Gustavo Endres.
Arguably the team’s top star will be on the sidelines as Barcelona 1992 Olympic champion Marcelo Negrao will make his debut as a coach at the senior level.
“Five years ago my son started playing volleyball in SESI’s youth system and every time I went to watch his matches people would ask me to get into coaching because I had so much experience to share,” he explained. “I spoke with the club and they gave me a chance. I’ve coached at every level in their system until I had this opportunity and I’m super excited as I’ve worked with several of these players and I know about their potential.”
Taubate’s main challengers this season will most likely be Volei Renata Campinas, who finished second in 2019. The team coached by Argentinean Horacio Dileo has Athens 2004 Olympic champions Mauricio Lima and Andre Heller in their management ranks.
Campinas have some well-known veterans on their roster, such as Argentinean setter Demian Gonzalez and London 2012 Olympic silver medallist opposite Leandro Vissotto.
Former opposite Andre Nascimento, another member of Brazil’s Athens 2004 team, is now a director with Volei Um Itapetininga, who will be SESI’s opponents in their opening match. Campinas will debut against Vedacit Guarulhos, who will also be Taubate’s first opponents on September 18.
More volleyball from Brazil:
Brazil coaches look ahead to 2021 VNL
Jaqueline stays with Osasco for another season
Brazil coach Ze Roberto provides insight on key players for Tokyo Olympics
Olympic champion William to lead Minas talent
Lorenne highlights SESC's new additions
Lucas-Bruno combo ready to go again at Taubate
Tandara returns home for fourth stint with Osasco
Conte stays with Sada Cruzeiro
World Cup MVP Alan back with Sada Cruzeiro
Mauricio Borges joins Taubate's constellation of stars
Rio 2016 MVP Serginho ends glorious career
Quick links:
FIVB.com - Volleyball
Facebook
Twitter
Instagram
Youtube