Walsh Jennings and Sweat play for survival after debut setback 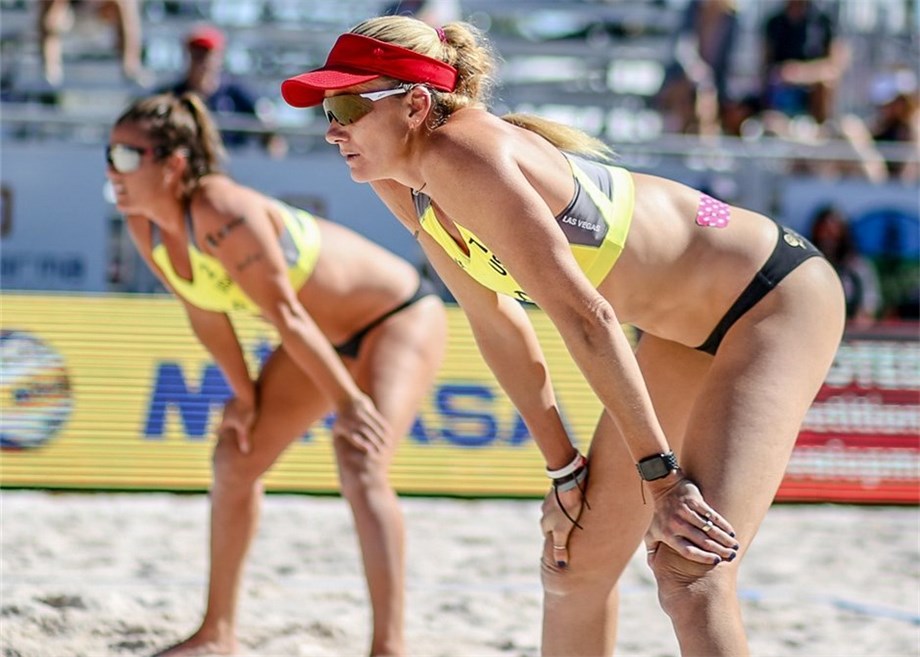 Las Vegas, USA, October 18, 2018 – Americans Kerri Walsh Jennings and Brooke Sweat had home-court advantage in the first time they stepped in the sand as a team, but the Olympians could not leave the center court of the FIVB Beach Volleyball World Tour Las Vegas Open presented by p1440 with a triumph on Thursday.
Walsh Jennings and Sweat, who recently announced their partnership and were playing together for the first time, could not handle the Netherlands’ Marleen van Iersel and Joy Stubbe, who dominated the Americans to post a straight-set (21-16, 21-14) victory in the opening match of Pool B.
The recently-formed team will face an elimination match in just their second game in the tournament, when they play Canadians Taylor Pischke and Kristina May for the third-place of their group.
“We did some good stuff out there,” Sweat said after the defeat. “I need to clear up my passing a little bit, but there were some positives, so we need to go back and pick a little bit more and figure things out for tomorrow. We’re a new team, so we’ll have to figure things out as we go. It’s a long process, with a lot of learning and I’m looking forward to it. I know it’s going to take time, but it’s all going to happen.”
The match was also the first one played the 32-year-old Sweat since May. The veteran underwent right shoulder surgery and has just returned to competition.
“It feels good, but it was harder than I thought it would be,” she admitted. “It was good to get it out of the way and get the nerves out. I need to be able to will play a little more freely and get back to my game. Just being out here, competing and seeing other teams, it’s just going to take some time.” 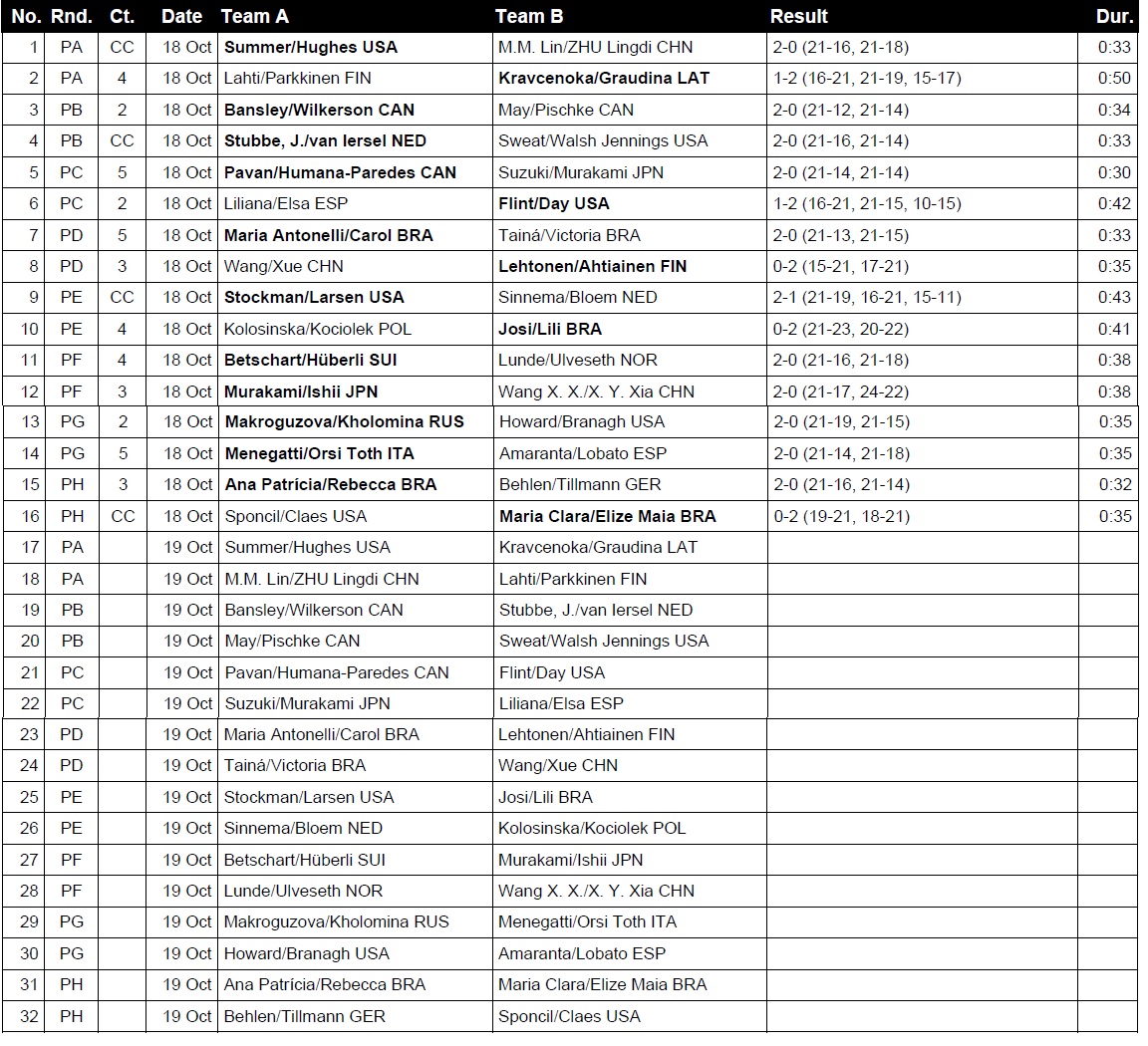 Another European team to debut in the tournament with a straight-set victory was the one of Switzerland’s Nina Betschart and Tanja Huberli. The Swiss dominated Norwegian qualifiers Ingrid Lunde and Old Ulveseth to post a 21-16, 21-18 win on Pool F.
“We struggled a little bit in the beginning to adjust to the sand, but we kept calm and focused on our blocking-defense game, which was good,” Betschart explained. “It’s great to start winning and avoid an elimination match in just our second game. The year has had some ups and downs for us, but we reached a good level in the last tournaments and we want to finish strong here.” 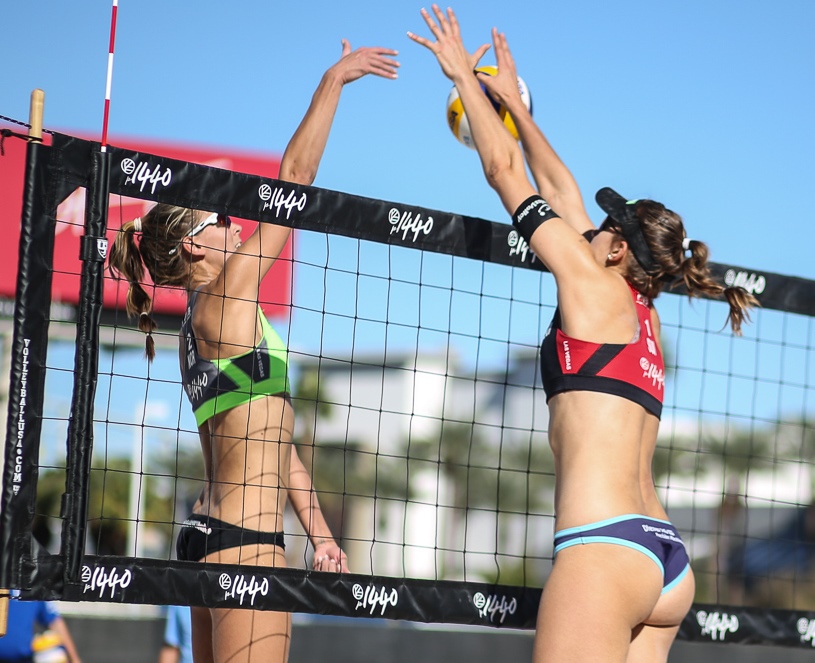 Huberli dominated the net against the Norwegians
Sixteen teams ended the first day of the tournament undefeated – four from Brazil, three from the United States, two from Canada and one from Latvia, the Netherlands, Finland, Japan, Switzerland, Russia and Italy.
Pool play will be concluded on Friday, when the winners of each of the eight pools will be known. These duos will move directly to the Round of 16. Tandems which lost their opening games will need to win their second matches to advance to the elimination round.
Quick links - Beach volleyball:FIVB Beach Volleyball World Tour - Las VegasFIVB.com - Beach volleyballLatest VideosFacebookTwitterInstagram