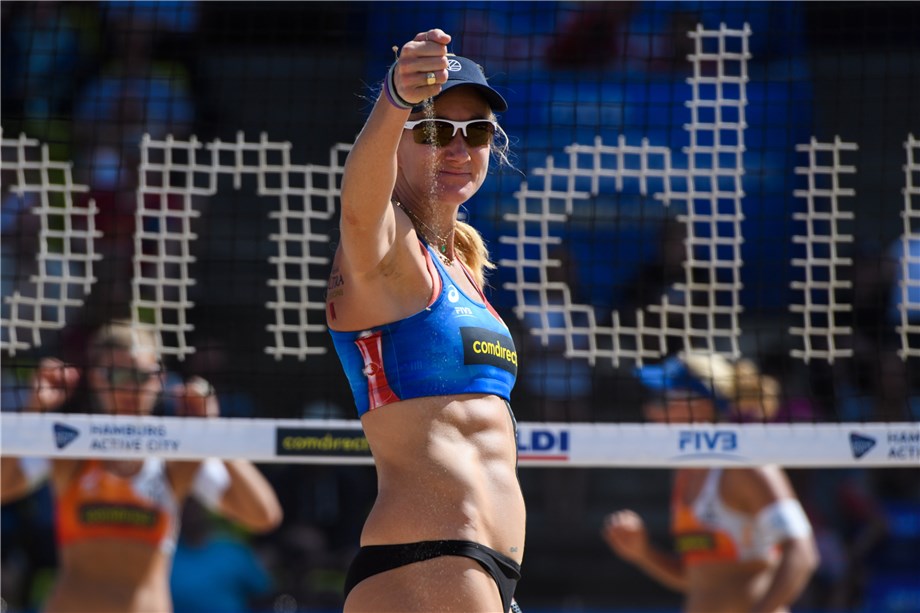 Sampling the sand Friday at the 2019 FIVB World Championships is American Kerri Walsh Jennings, the three-time Olympic and world champion

Hamburg, Germany, June 28, 2019 – Kerri Wash Jennings made her FIVB Beach Volleyball World Championships debut in 2001.
Quick links - Beach volleyball:
FIVB Beach Volleyball World Championships Hamburg 2019
FIVB.com - Beach volleyball
Facebook
Twitter
Instagram
But she had no idea about the tournament’s significance when she arrived in Klagenfurt.
“I just thought it was another tournament,” Walsh Jennings said. “At some point it hit my consciousness that this was a little bit bigger. I was so unaware and naïve and just there to play.”
Walsh Jennings finished ninth in Klagenfurt, the first of her seven world championship appearances.
She went on to win back-to-back-to-back world championships in 2003, 2005 and 2007 with Misty-May Treanor.
But Walsh Jennings has not had as much success at recent world championships.
She finished ninth with April Ross in 2015 while “just hoping my shoulder wouldn’t dislocate.” She did not play in 2017 due to injury.
Walsh Jennings arrives in Hamburg healthy and with a new teammate, Brooke Sweat. The duo won the four-star Jinjiang in May.
“She makes my life easier out there,” Walsh Jennings said. “She knows the game inside and out. She’s really fun to play with.”
Sweat, who competed at the Rio 2016 Olympics with Lauren Fendrick, has enjoyed playing with Walsh Jennings.
“I get to see behind-the-scenes why she has gotten where she has,” Sweat said about the three-time Olympic champion.
Walsh Jennings believes it’s possible for her to become the first person to win a fourth world championship.
“We’re going to have to be the best we’ve been to win,” Walsh Jennings said, “but it’s possible.”
Possible yes, but the American will have a challenge ahead of them to make it out of group play into the elimination rounds after the 18th-seeded Walsh Jennings and Sweat dropped their opening match here Friday in a 2-1 (21-15, 19-21, 15-9) Pool G setback to 31st-seeded Joy Stubbe/Marleen Van Iersel of The Netherlands. 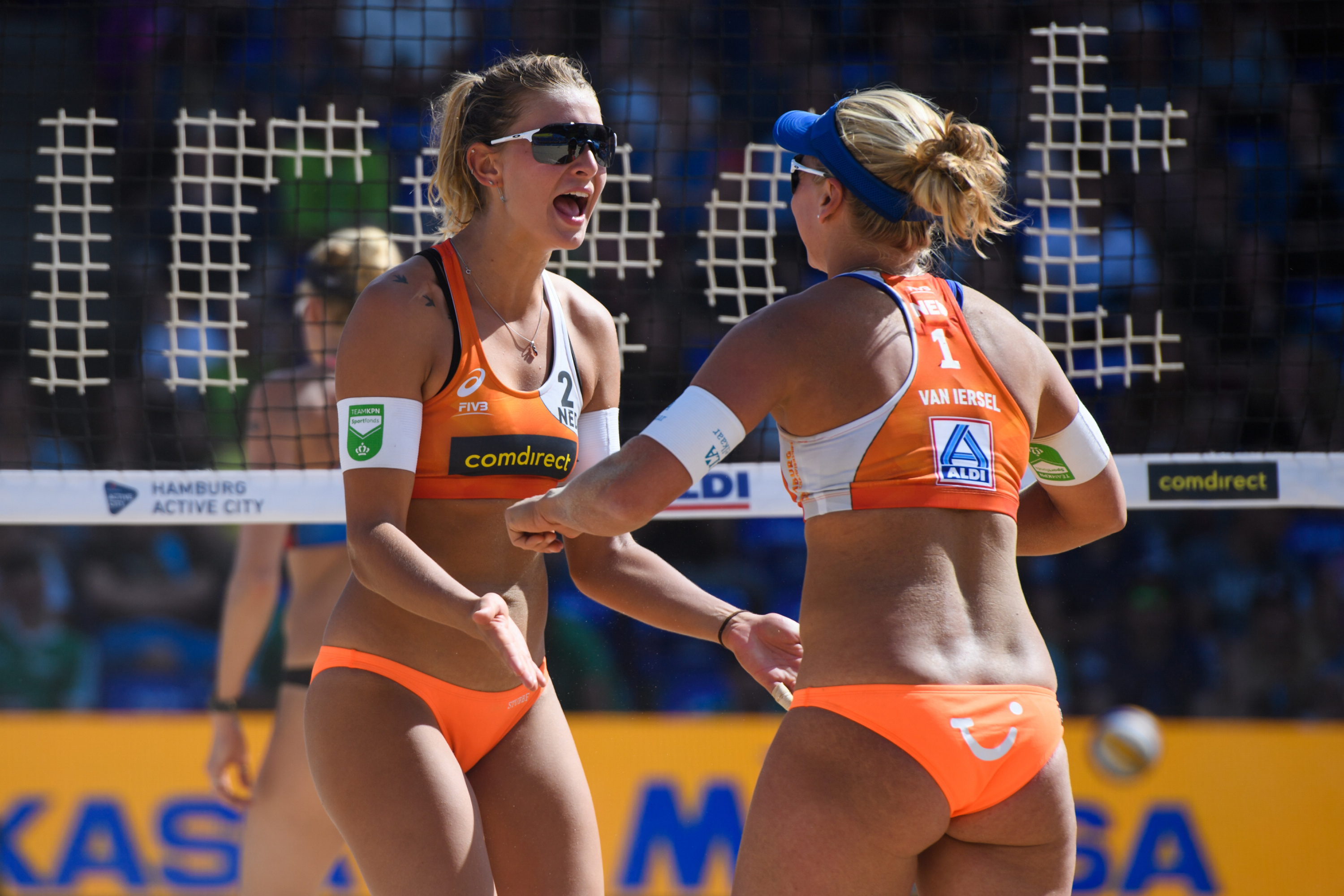 Dutch delight for Joy Stubbe (left) and Marleen van Iersel Friday
The remaining group schedule has Walsh-Jennings and Sweat playing 42nd-seeded Maita Cousin/Letendrie Nathalie Marie of Mauritius Sunday morning before a Monday evening match against seventh-seeded Mariafe Artacho/Taliqua Clancy of Australia.
The United States versus Australia will be the fourth match between the two teams as Walsh Jennings and Sweat have a 2-1 edge in the three previous meetings this season with Artacho and Clancy, including gold medal victory May 26 at Jinjiang, China. 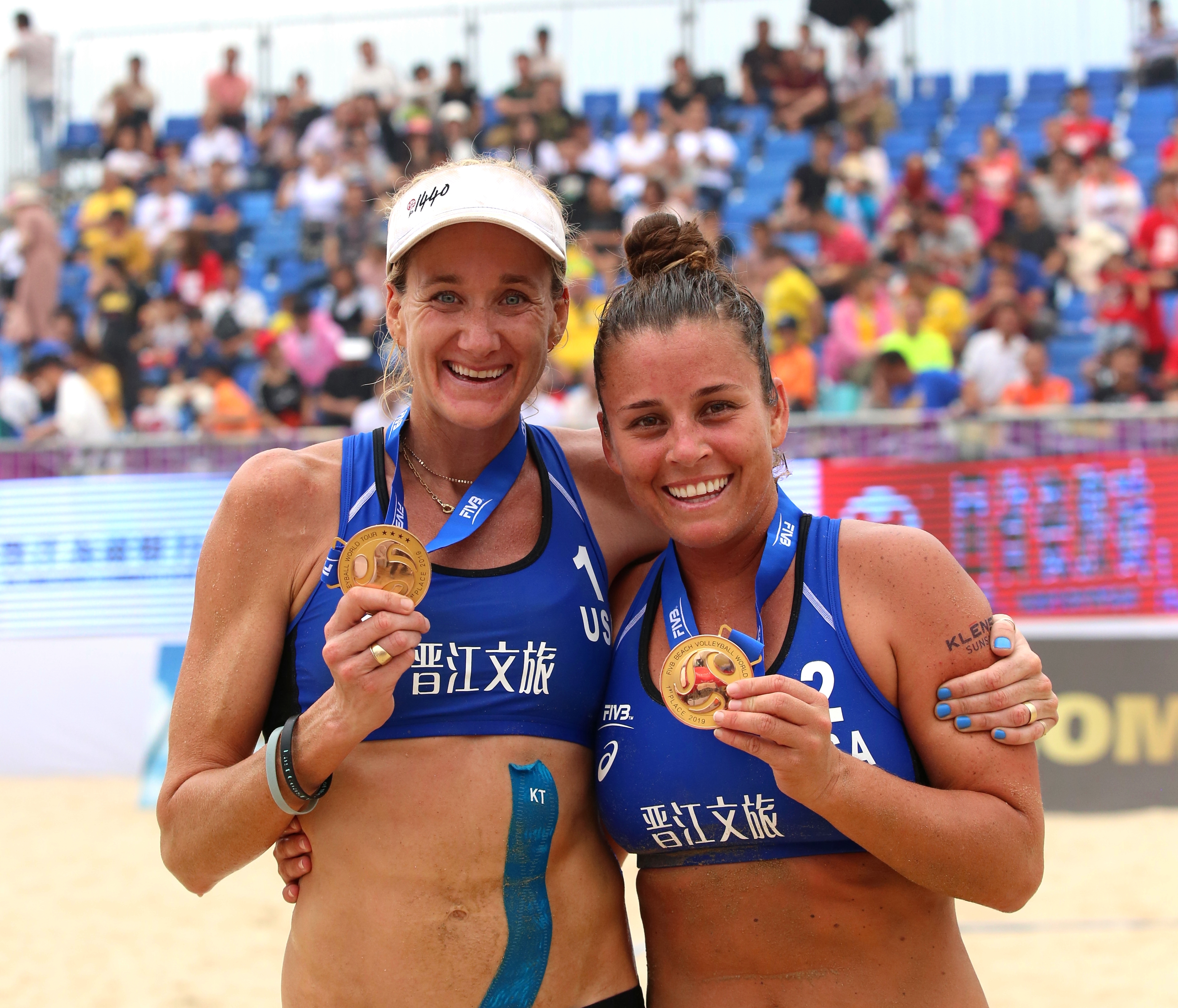 Kerri Walsh Jennings (left) and Brooke Sweat with their medals at Jinjiang
Artacho and Clancy, who captured the FIVB World Tour stop in Warsaw two weeks ago, opening played Friday with a 2-0 (21-5, 21-6) victory in 22 minutes over Cousins and Marie.