What preparation for the World Championships for the late Austrian entry Schutzenhofer and Plesiutschnig? 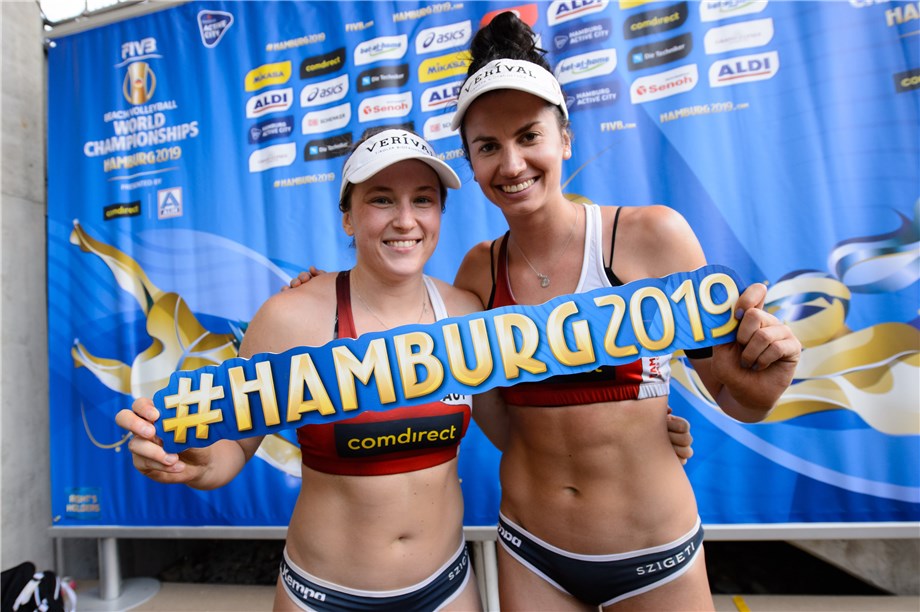 Austrians Katharina Schutzenhofer (left) and Lena Plesiutschnig are all smiles after gaining a late World Championship entry and winning one of their first two pool play matches.

Hamburg, Germany, June 29, 2019 - Beach volleyball teams prepared differently for the 2019 FIVB World Championships presented by comdirect and ALDI Nord as many stayed in Europe following the Warsaw Open in Poland two weeks ago.
Quick links - Beach volleyball:
FIVB Beach Volleyball World Championships Hamburg 2019
FIVB.com - Beach volleyball
Facebook
Twitter
Instagram
Almost all the pairs competing here this weekend in the US$1-million World Championships had plenty of time to create game plans for their three pool play matches as the schedule has been set since June 4 for all the 96 teams initially entered in the FIVB biennial event.
For Lena Plesiutschnig and Katharine Schutzenhofer, the Austrians were prepping to play in another tournament until an injury to Marketa Slukova forced her second-seeded Czech Republic team to withdraw from the World Championships to allow the team from the neighbouring country to replace them.
“On Thursday afternoon, we found out, then on Friday we had our first match, so we were not prepared that good for other teams,” said the 25-year old Schutzenhofer.  “It was our main goal to qualify for the World Championships, but when we didn’t, we started to focus on another tournament.”
The Austrian duo, who also took the seeding of the Czech Republic team, now hopes that history can repeat itself. The last time Germany hosted a World Championships, in Berlin in 2005, a team that got a last-minute entry was able to advance to the semifinals before finishing fourth. That pair was Marvin Polte and Thorsten Schoen, who played in their only semifinal ever in their brief career on the FIVB World Tour. 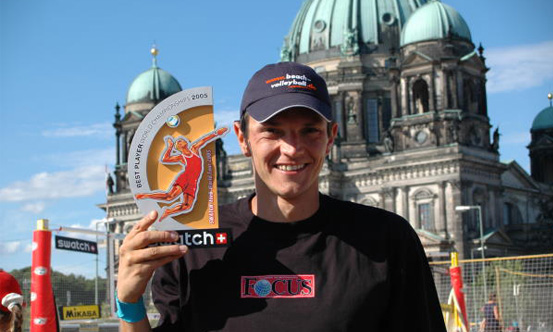 Thorsten Schoen, who was named the most outstanding player at the 2005 FIVB World Championships in Berlin after he and Marvin Polte placed fourth as a late entry into the event.
Plesiutschnig and Schutzenhofer are not lacking in success though, having won four international medals together, or in experience. In fact, the Austrian are tied for third among the women’s teams in the World Championships in terms of FIVB World Tour events played together, with the Hamburg event being the 49th time they have taken the sand together. With their partnership beginning in 2010, they have played together ever since with the exception of 2013 and 2017 seasons.
“It is really hard because we were looking for four to five weeks to get in, but we didn’t get in, so when we began play, we were nervous,” Plesiutschnig observed. 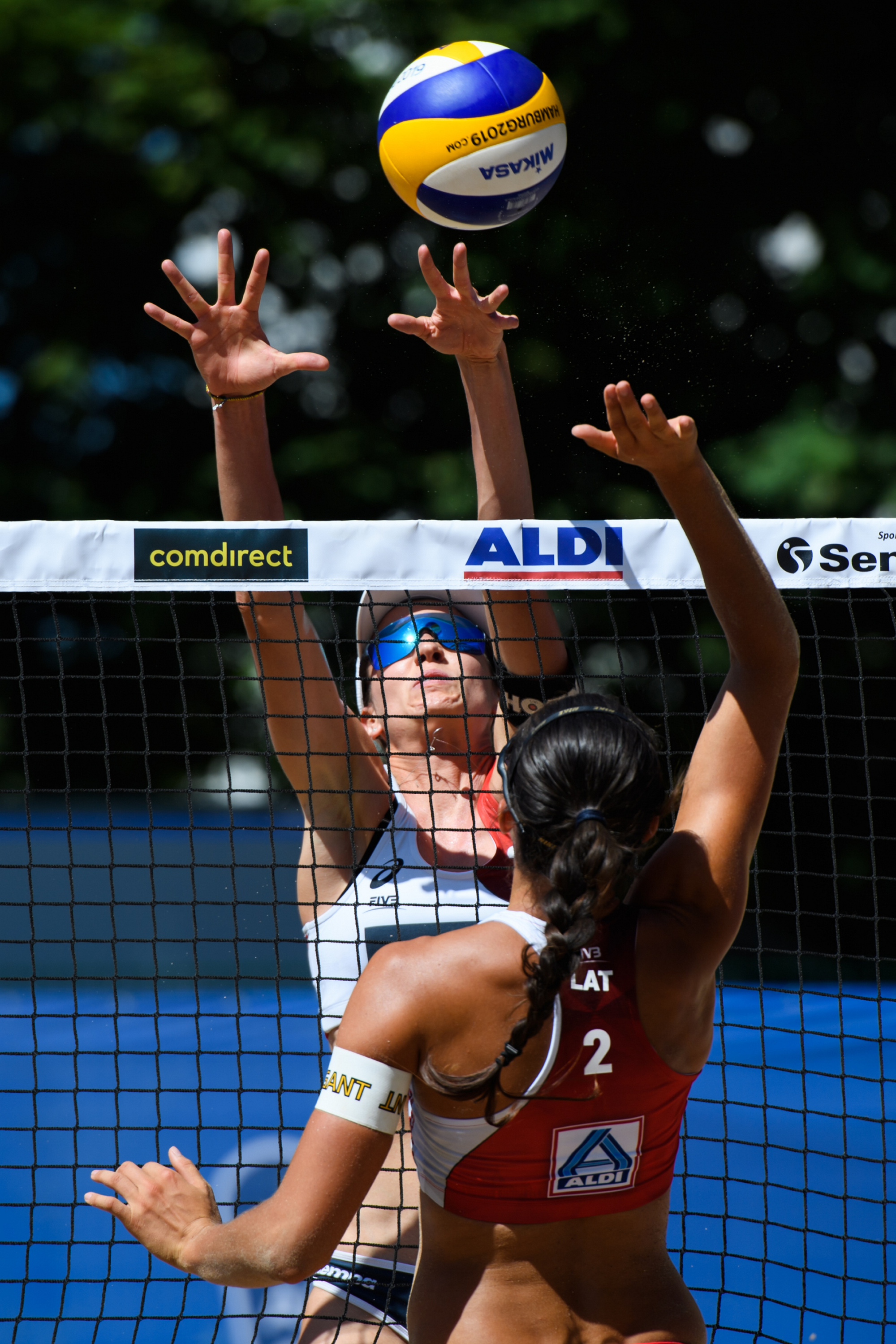 Lena Plesiutschnig (white top) of Austria blocks against Latvian Anastasija Kravcenoka Saturday at the 2019 FIVB World Championships.
The Austrians won their opening pool play match Friday with a 2-1 (21-10, 16-21, 15-8) victory in 54 minutes over 47th-seeded Leonie Kortzinger/Sarah Schneider of Germany.  Saturday, Plesiutschnig and Schutzenhofer dropped a 2-0 (21-15, 21-16) decision to 26th-seeded Tina Graudina/Anastasija Kravcenoka of Latvia.
On Monday, the Austrians will play their final Pool B match against 23rd-seeded Katarzyna Kociolek/Kinga Wojtasik of Poland. With a win, they will advance to the 32-team single-elimination bracket while a loss could result in another tense waiting period to see if they can advance based on tiebreakers.
Either way, while the Austrians had other plans for these two weeks, they happily changed them in order to compete in the 2019 FIVB World Championships.