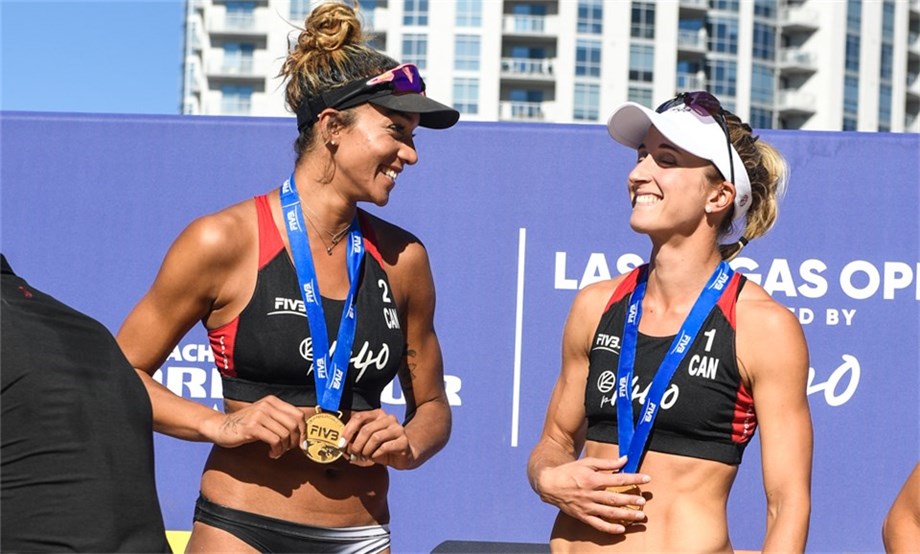 Lausanne, Switzerland, January 16, 2019 – Heather Bansley and Brandie Wilkerson have started 2019 in first place on the FIVB Beach Volleyball Women’s World Rankings. As such they are the team to beat as the world's top teams gear up for this year's next events including the FIVB Beach Volleyball World Championships in Hamburg, Germany from June 28 to July 7.
The Canadian pair are top with 5,660 points, just ahead of Brazil’s Agatha Bednarczuk and Eduarda ‘Duda’ Santos Lisboa, who are on 5,480, and fellow Canadians Melissa Humana-Paredes and Sarah Pavan who are third with 5,440.
Teams win 600 points for gold at an FIVB Beach Volleyball World Tour 5-Star tournament, 400 for victory at a 4-Star and 300 for winning a 3-Star.
Quick links - Beach volleyball:
FIVB Beach Volleyball World Tour
FIVB.com - Beach volleyball
Latest Videos
Facebook
Twitter
Instagram
Bansley and Wilkerson have played together since the Toronto 2016 FIVB Beach Volleyball World Tour Finals. They failed to finish on the World Tour podium in 2017, but in 2018 they won three gold, two silver and two bronze.
Their first gold came at the Warsaw 4-Star in July and they added two more in their most recent tournaments, the Las Vegas 4-Star and Chetumal 3-Star in October 2018.
Agatha and Duda ended 2018 as gold medallists at the Hamburg 2018 FIVB World Tour Finals. They also won gold at the Itapema 4-Star tournament, silver at the Moscow 4-Star and bronze at the Warsaw 4-Star.

Pavan and Humana-Paredes twice won gold in 2018 – at the Gstaad 5-Star and Xiamen 4-Star. They also became the first women’s team to win gold at a Commonwealth Games after Gold Coast 2018 in Australia became the first edition of the Games to feature beach volleyball.
They finished their year by showing the current strength of Canadian beach volleyball, by facing Bansley and Wilkerson in the Las Vegas 4-Star gold medal match.
Marketa Slukova and Barbara Hermannova’s late success in 2018 is reflected in the Czech pair sitting in fourth place with 5,180 points.
In June they won gold in front of their home crowd at the Ostrava 4-Star and in August they won their second at the Vienna 5-Star. In between they won bronze at the CEV European Championships and that success booked their place at the World Tour Finals where they won silver.
There are two other Brazilian teams in the top 10 - Maria Antonelli and Carolina Salgado, and Barbara Seixas and Fernanda Berti - and two US teams – Summer Ross and Sarah Hughes, and April Ross and Alexandra Klineman.
Australians Mariafe Artacho del Solar and Taliqua Clancy sit in seventh place, and while Germany’s Julia Sude and Chantal Laboureur are sixth, Sude recently announced that she will now play alongside Karla Borger.