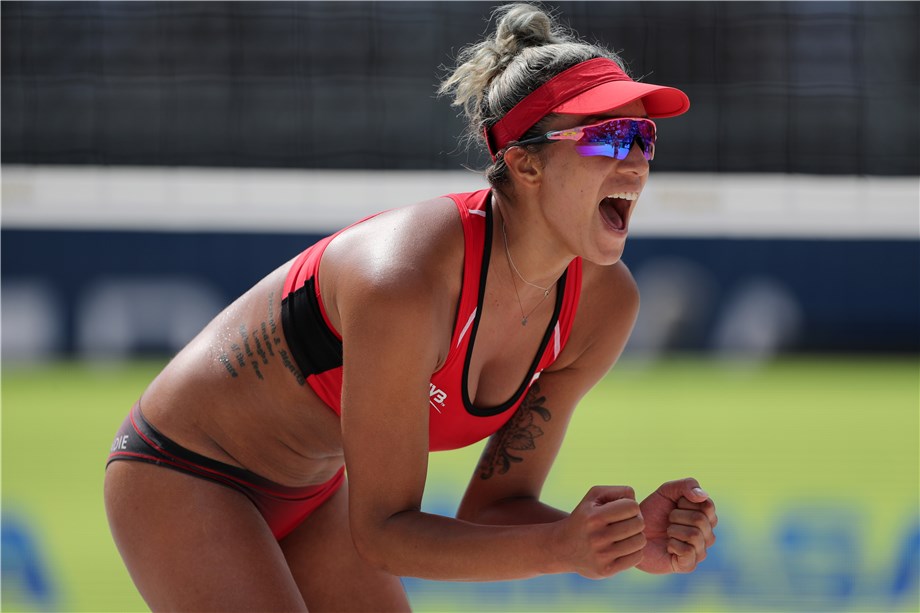 Long Beach, California, July 30, 2020 - On June 18, the AVP announced that yes, there would still be a season in this strange, pandemic-altered year. It wouldn't be the usual eight tournaments, spread over the course of four months. Just three, on back-to-back-to-back weekends, all in Long Beach, California. Only six teams in the main draw, with two more coming out of a 12-team qualifier. The news was received with ineffable excitement – volleyball is back! – and, also, quite a good bit of frenetic concern.

After months of uncertainty and limited ability to train, many wondered, how are we going to be ready to compete in a month?
“C’mon,” Brandie Wilkerson said, laughing, “you guys will be ok, you’ve been playing together for three years now. Me and Sara [Hughes] just got here.”
Indeed. While the usual podium favorites on the AVP Tour – April Ross and Alix Klineman, Sarah Pavan and Melissa Humana-Paredes, Sarah Sponcil and Kelly Claes, Kelley Kolinske and Emily Stockman – have been playing for multiple seasons now, Hughes and Wilkerson have yet to reach double-digit practices.
Not that you’d ever be able to guess. Their results have been fantastic, a second in the debut Monster Hydro Cup on July 19, and a third in the Wilson Cup on July 26. Those finishes, though, only tell a smidgen of the story. To see them on the court is to see what happens when two players who can play well with virtually anyone, in any amount of time, are put on the same side of the net.

“On the court together, just our personality and our athleticism and energy is really unique,” said Hughes, who played the 2019 season with a variety of partners after Summer Ross went out with a back injury. “We just have so much passion and we’re just so grateful that we can be living this lifestyle as professional beach volleyball players. We respect each other. We respect the game. It’s out of pure love and passion that we’re playing and we want to win and we want to take home titles together.”
It hasn’t even mattered that Hughes, who has played on the right side her entire professional career, moved to the left, taking advantage of the left-handed Wilkerson’s ability to option from the right. Nor has it mattered that it’s a different block Hughes is playing behind, and a different defender for whom Wilkerson, who usually plays with Canadian Heather Bansley, is blocking.
They’ve made it look easy. Better than easy, actually. They’ve made it look fun.
“It’s like a new level of joy,” Hughes said. “I’m very vocal – I love to cheer, I’m passionate. She gives it right back to me in the same manner. We feed off each other which is really cool. At the same time, if things are going wrong, there’s such a sense of calm, which is unique, because usually those are the high stress situations.”
It’s the little things, off the court, that has helped bridge the gap of time devoid of practices. They’ll drive to practice together. Talk afterwards. Wilkerson’s been to Hughes’ house. They do more than just play beach volleyball together. Small moments like that make it easier to weather the hard moments on the court.
“It’s just those little things that get you comfortable with each other as people that allow us to have fun when we’re in a situation that’s very professional and very intense and we both thrive off of that,” Wilkerson said. “I just have so much respect for her for being as crazy as I am.”
They’ve thrived both as individuals and a team. Wilkerson is leading the series in both aces and blocks, ahead of Klineman and Pavan despite standing six inches shorter than both. Hughes has finished third and second in digs, respectively, in the Monster Hydro and Wilson Cups.
Both were happy to point to coach Jose Loiola, one of the best Brazilian players of all-time, as the mastermind behind their defense, which is, statistically speaking, the toughest to score on in the tournament.
“It’s been fantastic, honestly one of my favourite coaches I’ve ever worked with,” Wilkerson said. “It’s been awesome having this blocking legend as my coach. I’m trying to ask as many questions as possible. He understands when to say stuff, when to not, when to bring things up, when to cool things down. You can tell he really takes pride in being a good coach and a great supporter for his athletes.”
They’ve got everything dialed, on and off the court. The only thing missing, then, is a few years of experience. And a victory. This weekend is the Porsche Cup, the final in the series and the last shot for Wilkerson and Hughes to claim their first win for this American-Canadian-Brazilian team.
“As much as we’re having fun and we’re grateful to be out there, we’re here to win,” Hughes said. “That’s the goal. We want to win. That’s what we’re going to do. We were joking: ‘Let’s go for the trifecta: second, third, but let’s get first this time around. Just run the podium.’ As much fun as we’re having out there, taking third, I’m not satisfied with that. I want to win. We want to be in the finals. We want to win the Porsche Cup, maybe a Porsche car. That would be epic.”
It would be exactly what they know they’re capable of doing.
“It has been a really great start,” Wilkerson said. “From the moment we started talking about goals, I was in Canada, she was in the U.S., we said ‘If we’re doing this, we’re doing this and we’re winning this.’ We wanted it all.
“If we’re going to do this with this crazy epidemic we’re in, we’re going to make it worth our time and we’re going to win it all. We’re happy, and we’re super stoked, we’re definitely still very hungry for a title.”