Lausanne, Switzerland, February 13, 2020 - As the Olympic Games Tokyo 2020 shuffle ever closer, the FIVB Beach Volleyball World Tour enters a very interesting, intriguing and important few months.
Teams have only until June 14 to claim a berth for their country at the Olympic Games via the Olympic rankings, and that is now just four months away. It means that every point, every match and every result becomes that little bit more important.
Rome will play host to the final qualification tournament before the national federations claiming berths via the Olympic ranking are confirmed and tickets can be booked for the 32nd Olympic Games. The 5-star event in the Italian capital will provide the final chance for teams to score vital last gasp ranking points for qualification.
The women’s World Tour competition is currently wide open and in the 2019 calendar year we saw 10 different teams win a gold from just thirteen major events (4- and 5-star). In the men’s, seven teams won the gold medals in 15 events.
Who will claim the medals at Tokyo 2020?
In a thrilling period to be following the sport, we have to ask the question whether any one has any idea who will be leaving Japan with a medal in six months time. A total of 24 teams will have the opportunity to represent their country at the Games, with the host nation Japan guaranteed a place. Miki Ishii and Megumi Murakami currently hold the title of being Japan's number one team and are currently placed 19th overall in the Olympic qualification rankings.
Scenario no.1: Teams benefiting from time to prepare
Tina Graudina and Anastasia Kravchenoka from Latvia are the newly crowned European Champions and alongside the experienced Elsa Baquerizo and Liliana Fernandez from Spain guaranteed a spot for Latvia and Spain respectively at the Games by winning the FIVB Beach Volleyball Olympic Qualification Tournament in China in September 2019. Neither side managed to win a World Tour event last year but the pressure is off both sides as they can afford to pick and choose their events in preparation for the Games as they are set to represent their countries. 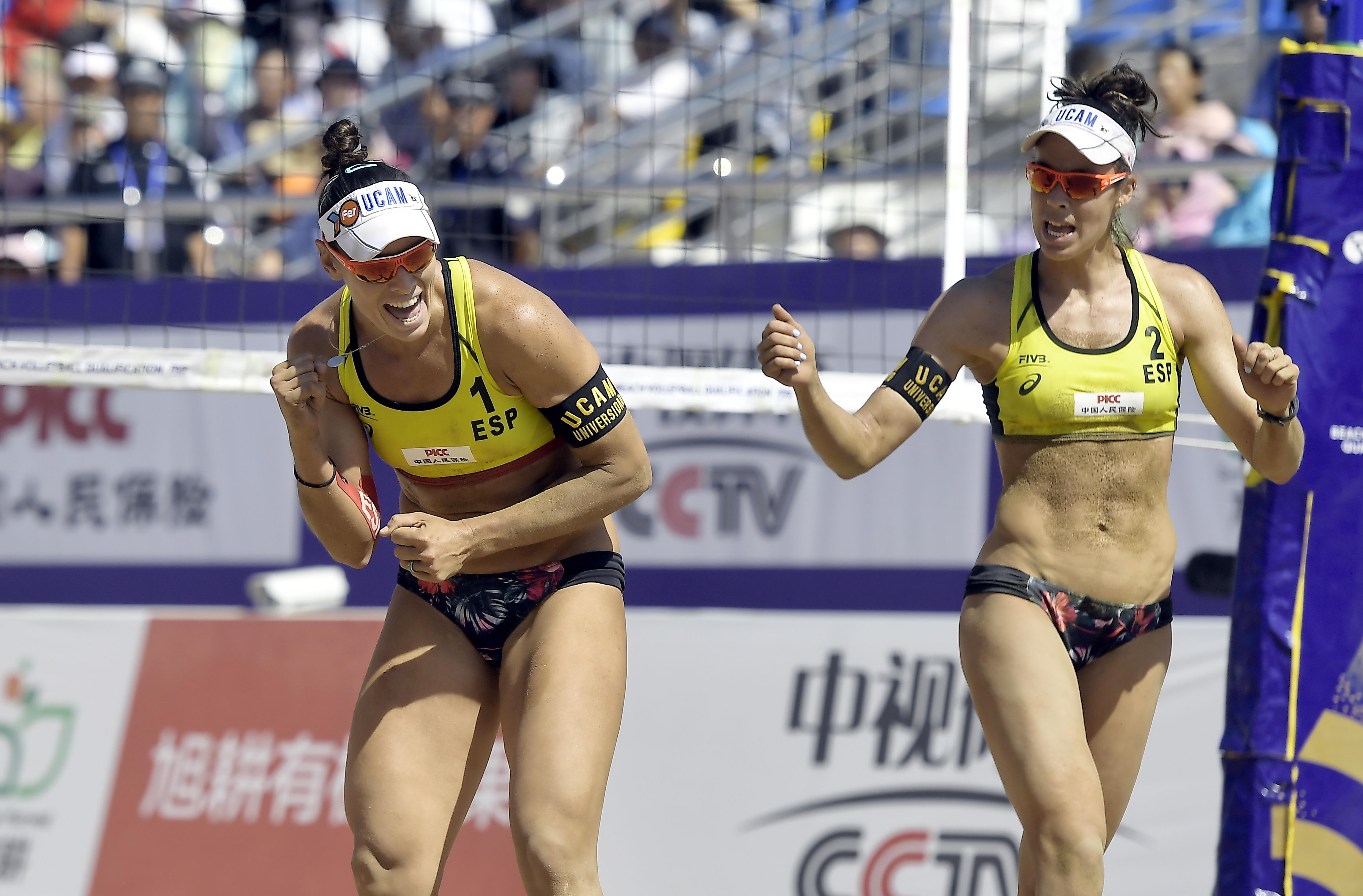 Elsa Baquerizo and Liliana Fernandez celebrate in Haiyang
Another team that can prepare and pick and choose their events in 2020 are the world champions Sarah Pavan and Melissa Humana-Parades. They booked a place at the Games for Canada by winning the biggest event of 2019 - the FIVB Beach Volleyball World Championships in Hamburg, Germany. They also won the 5-star Major Series event in Vienna,  meaning they won two of last year’s flagship events. The pair also won the 3-star on their home sand in Edmonton but were fifth in Rome at the end of the season, and had some mixed results at some 4-star events, meaning that they did not quite dominate the whole season.
They have proven that under the leadership of American coach Scott Davenport, they can peak on the big occasion. And if you put that alongside the fact that they no longer have the pressure of qualification, it will make them favourites for many people  in Tokyo.
Scenario no. 2: Laura Ludwig and Maggie Kozuch make a splash
The World Tour Finals in Rome provided one of the fairy tales of the season as Laura Ludwig made her way back to winning ways with new partner Maggie Kozuch. It had been almost two years since Ludwig had stood on top of the podium with former partner Kira Walkenhorst at the World Tour Finals in Hamburg in 2017, before taking a year away after giving birth to her first son, Teo.

Kozuch, a former indoor international only transitioned to beach volleyball in 2017 and agreed to split with Karla Borger at the start of the season to team up with the former world champion. But things started fairly slowly with a 25th in Xiamen, and Ostrava, but a 9th in Warsaw and 5th in Vienna showed real progression. The win in Italy earnt them 1200 world ranking points and launched them up to 15th in the Olympic Ranking race.
There is no doubting that all eyes will be on Ludwig and Kozuch as the season gets underway in Cancun as they are certainly still a couple of good finishes away from being confirmed at the Olympics. Like a lot of European teams, they have been training in Tenerife to be prepared for the season. No-one would put it past this team to keep improving all the way to the podium in Tokyo.
It’s clear that 2020 is going be an iconic year for beach volleyball, but it’s really unclear who will be on the podium come August. One thing is for sure, which is that women’s beach volleyball is in a very good place.
Look out for follow-up articles on Saturday and Monday as we review scenarios 3-6.
Quick links:
FIVB Beach Volleyball World Tour
FIVB.com - Beach volleyball
Facebook
Twitter
Instagram
This website uses cookies to ensure you get the best experience on our website. For more information please read our Cookies Policy.
Ok