Lausanne, Switzerland, February 15, 2020 - As Tokyo 2020 shuffles ever closer, the FIVB Beach Volleyball World Tour enters a very interesting, intriguing and important few months.
Teams have only until June 14 to claim a berth for their country at the Olympic Games via the Olympic rankings, and that is just four months away. It means that every point, every match and every result becomes that little bit more important.
Who will claim the medals at Tokyo 2020?
In a thrilling period to be following the sport, we have to ask the question whether any one has any idea who will be leaving Japan with a medal in six months time. A total of 24 teams will have the opportunity to represent their country at the Games, with the host nation Japan guaranteed a place.

Scenario no. 3: Rebecca and Ana Patricia lead the charge for Brazil
One team who aren’t really looking over their shoulder in the Olympic qualification process are Brazil's Rebecca Cavalcanti and Ana Patricia Ramos. They are led by former player Reis Castro and won in The Hague and in Xiamen, which were the first two 4-star events of 2019. By the time Cancun comes around at the end of March, however, they will not have won on the World Tour for nearly a year. But they undoubtedly proved themselves to be the most consistent team of 2019 with those two wins and another five podiums including a second in Ostrava and a third at the World Tour Finals. Their Olympic place is all but confirmed but they will be wanting to get back to winning tournaments as soon as possible to mount a charge for Brazil in Tokyo. 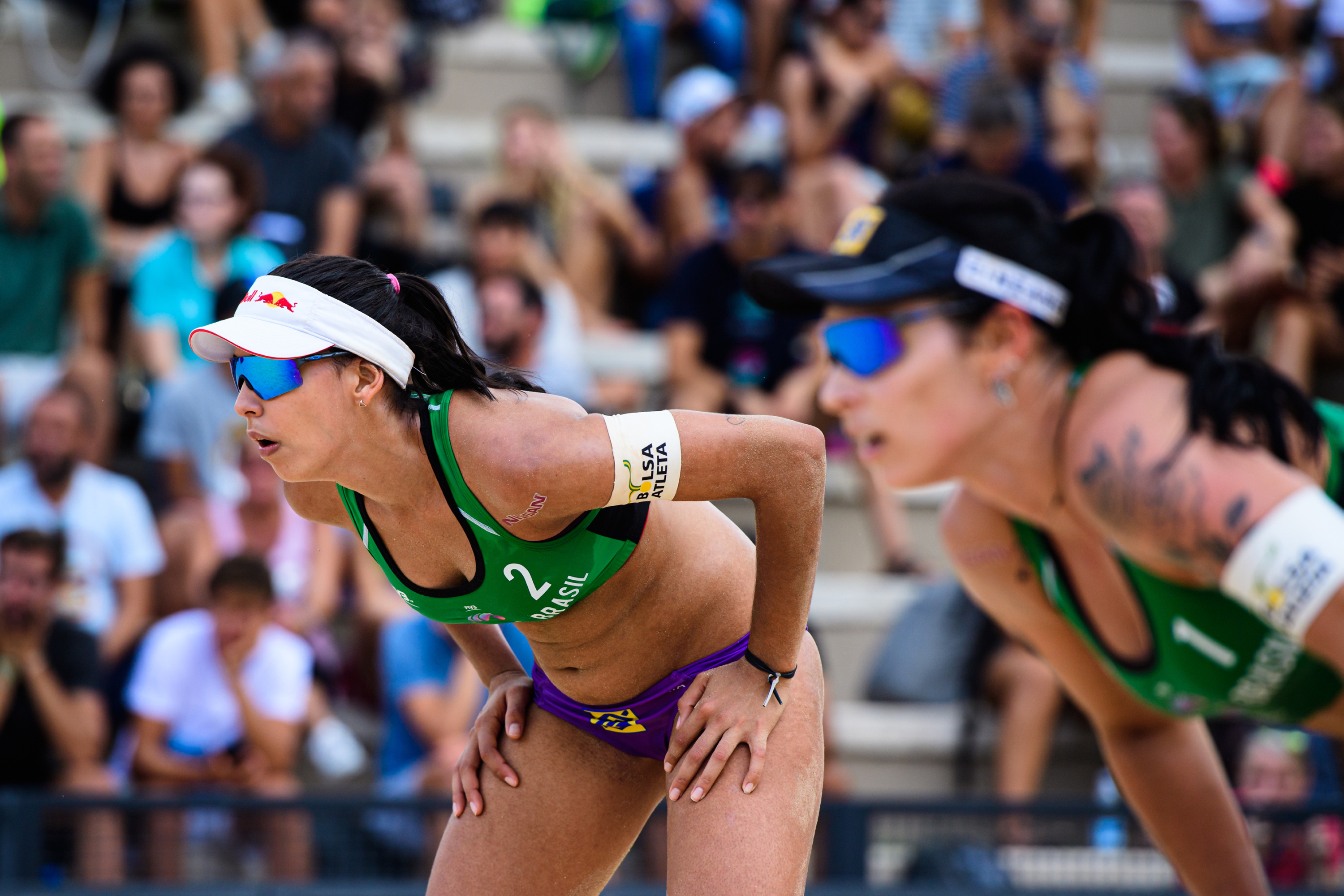 Ready to play, Duda (left) and Agatha of Brazil
Brazil have five teams currently in the top 15 of the Olympic qualification ranking, but can only qualify two for the Games. The current second placed team are Olympic silver medallist and 2015 world champion, Agatha Bednarczuk and former U19, U21 world champion and Youth Olympic champion Eduarda ‘Duda’ Lisboa. Duda was named the Most Outstanding Female Player on the World Tour for 2018/2019 and the team have been hosting a training camp in Brazil including Italians Marta Menegatti and Viktoria Orsi Toth.

The Brazilians won in Ostrava and in Tokyo last year, but after winning the World Tour Finals in Hamburg in 2018 missed out on winning any of the major competitions in 2019. They were on the podium in Rome, Vienna and Warsaw, but would have been disappointed with a 9th at the World Championship in Hamburg in July - a World Championships they would have been desperate to perform in. They are fourth in the provisional Olympic Rankings and have multiple titles and awards to their names. They are almost certainly going to be in Tokyo and they are almost certain to be very close to the podium.
Scenario no.4: USA make their claim
The USA have a phenomenal record in Women’s Olympic beach volleyball having won three gold medals in the first six editions of the Olympic Games. Kerri Walsh Jennings won all three of those gold medals alongside Misty May-Treanor and also one of the bronze medals in Rio with April Ross.

Walsh Jennings and partner Brooke Sweat are one of two American teams that currently cannot be ignored when you discuss the Olympics. They won the 4-star in Jinjiang in 2019 and then the very next day flew to Ostrava in the Czech Republic and managed to make the final four.
A victory in Jinjiang, bronze in Moscow and a podium at 3-star events in Sydney, Kuala Lumpur and Qinzhou came on top of a 17th in Vienna. The World Championships and the World Tour Finals do show they will be wanting to add some consistency to their results under the watchful eye of new Brazilian coach Joao Luciano Kioday. Kioday has joined the Americans having finished coaching Carol Solberg and Maria Antonelli. The Americans are 5th in the Olympic ranking and Walsh Jennings is looking to qualify for Olympics number six after playing her first games as an opposite player indoors at Sydney 2000. Sweat played with Lauren Fendrick in Rio and is looking to qualify for her second Olympic appearance.
The USA are also another nation who could easily qualify multiple teams for the Games. Kelley Larson and Emily Stockman would currently be in 10th place in the Olympic rankings if more than two teams per nation could qualify, and are 880 points behind Walsh Jennings and Sweat. Sarah Sponcil and Kelly Claes would be even higher after a really impressive season on the Tour and only need a couple of good results to close the 320 point gap between them and Walsh Jennings and Sweat. The race to make the Olympics is on for the USA and it should make for great entertainment.
The top ranked team for the United States are double Olympic medallist April Ross and Alix Klineman. A win at the Major Series in Gstaad, the 4-star in Itapema, and second place finishes at the World Championships in Hamburg and the Tokyo 4-star have put this American team in prime position for a place at the Games. They are currently sat second in the qualification table behind Rebecca/Ana Patricia.
USA’s A-Team showed consistency in finishing in the top 5 in the first 9 events of the season, but a 9th in Vienna and in Rome means they will be looking to come out in 2020 firing. April Ross already has an Olympic silver and bronze medal and just needs the gold to complete the set. Ross and Klineman are coached by Jennifer Kessy, who played with Ross at London 2012, when the pair won silver. Klineman is another indoor player adapting quickly to the beach and this will be a team to look out for when the Olympics get closer. 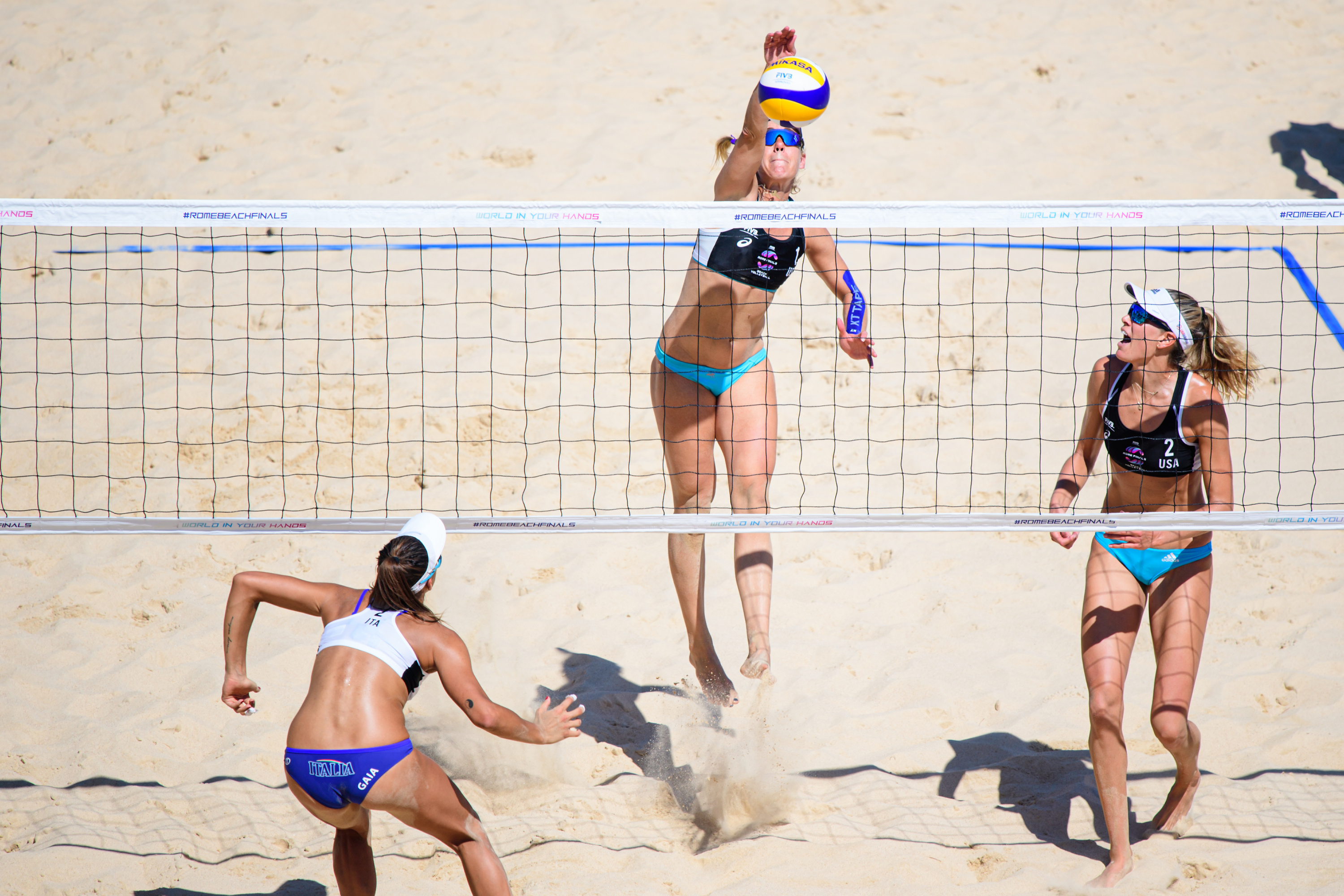 April Ross and Alix Klineman in action at the Rome World Tour Finals in 2019.
It’s clear that 2020 is going be an iconic year for beach volleyball, but it’s really unclear who will be on the Olympic podium come August. One thing is for sure, which is that women’s beach volleyball is in a very good place.
Look out for our follow-up article on Monday when we review scenarios 5-6.