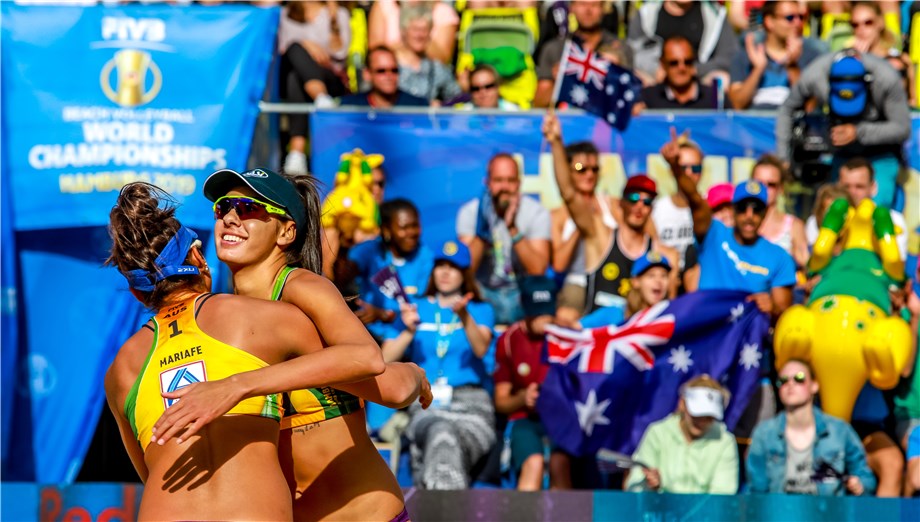 With cheering Australian fans in the background, Mariafe Artacho (left) and Taliqua Clancy celebrate a point at the 2019 FIVB World Championships

Hamburg, Germany, July 3, 2019 - The first full day of elimination matches for women begins here Wednesday at the US$1-million FIVB World Championships presented by comdirect and ALDI Nord with 16 matches featuring beach volleyball teams from 15 countries.
Quick links - Beach volleyball:
FIVB Beach Volleyball World Championships Hamburg 2019
FIVB.com - Beach volleyball
Facebook
Twitter
Instagram
With Wednesday being the sixth of 10 days of competition in the 12th edition of the world championships, the men's schedule at Am Rothenbaum Stadium will have eight pool play and four "lucky loser" matches to set the field for the start of elimination play Thursday.
A women's match of note Wednesday will be between the second- and fourth-ranked teams on the FIVB World Tour as No. 2 Mariafe Artacho/Taliqua Clancy of Australia meet No. 4 Heather Bansley/Brandie Wilkerson of Canada in a 3 p.m. (local time) match. 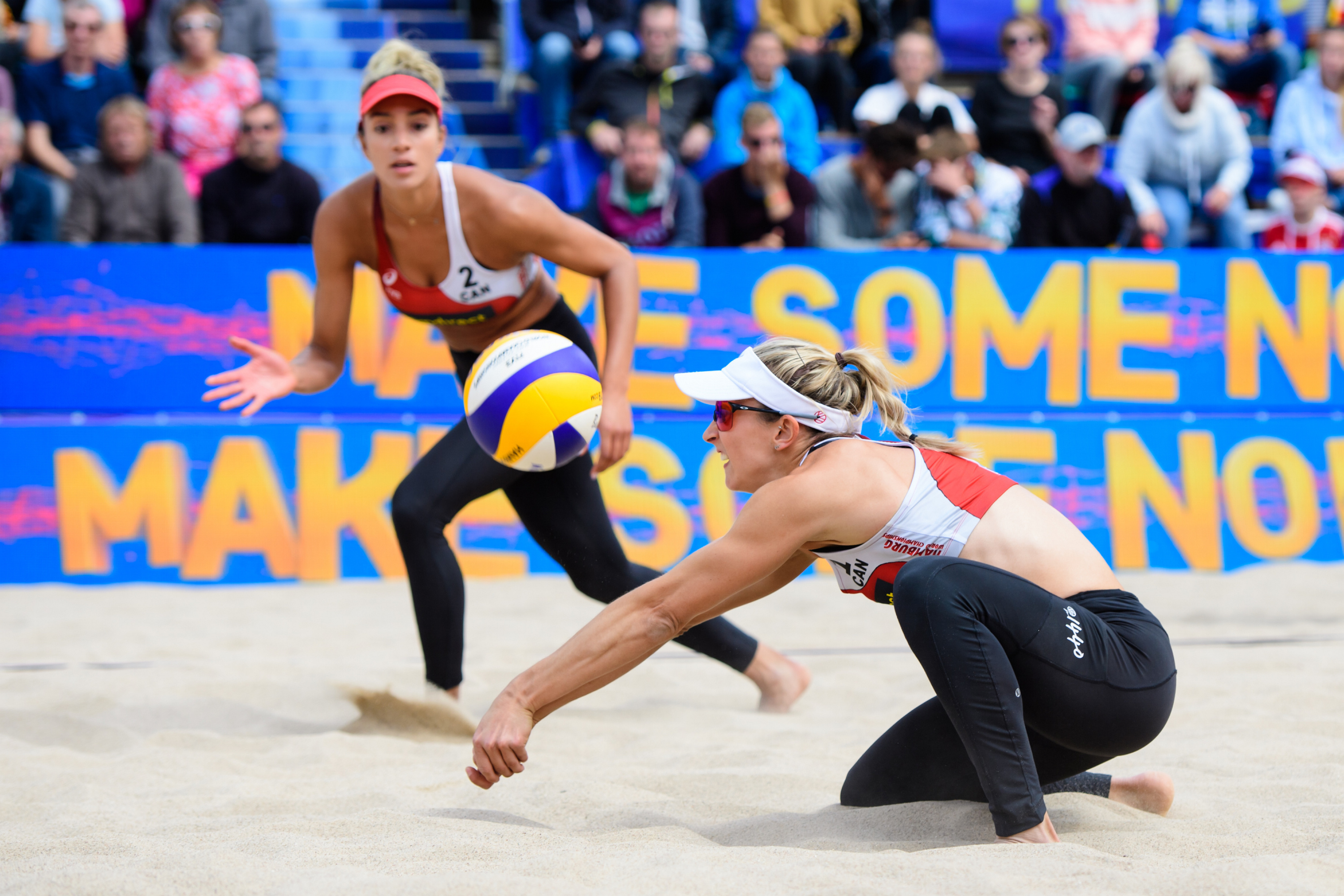 Brandie Wilkerson (left) and Heather Bansley of Canada in action on the Rothenbaum center court Tuesday
The Australians, who are seeded seventh in the competition, won the last FIVB World Tour event before the 2019 world championships in Poland and will be seeking their second win over Bansley and Wilkerson.  The two teams met almost a year ago in Portugal as Artacho and Clancy defeated the Canadians enroute to a podium-topping performance in Espinho.
Prior to the start of 2019 FIVB World Championships, the third-seeded Bansley and Wilkerson were the topped-ranked team on the World Tour for 35-straight weeks as Canadians used back-to-back wins in the United States and Mexico last October to gain the No. 1 position.
Fifteen of the 32 women's team remaining in the competition are from Brazil (four pairs), Germany (six) and the United States (five) as the three countries will meet four times Wednesday.  In a 6 p.m. center court match, the world’s current No. 1-ranked team of Agatha Bednarczuk/Eduarda "Duda" Lisboa of Brazil are challenged by 18th-seeded Brooke Sweat/Kerri Walsh Jennings of the United States. 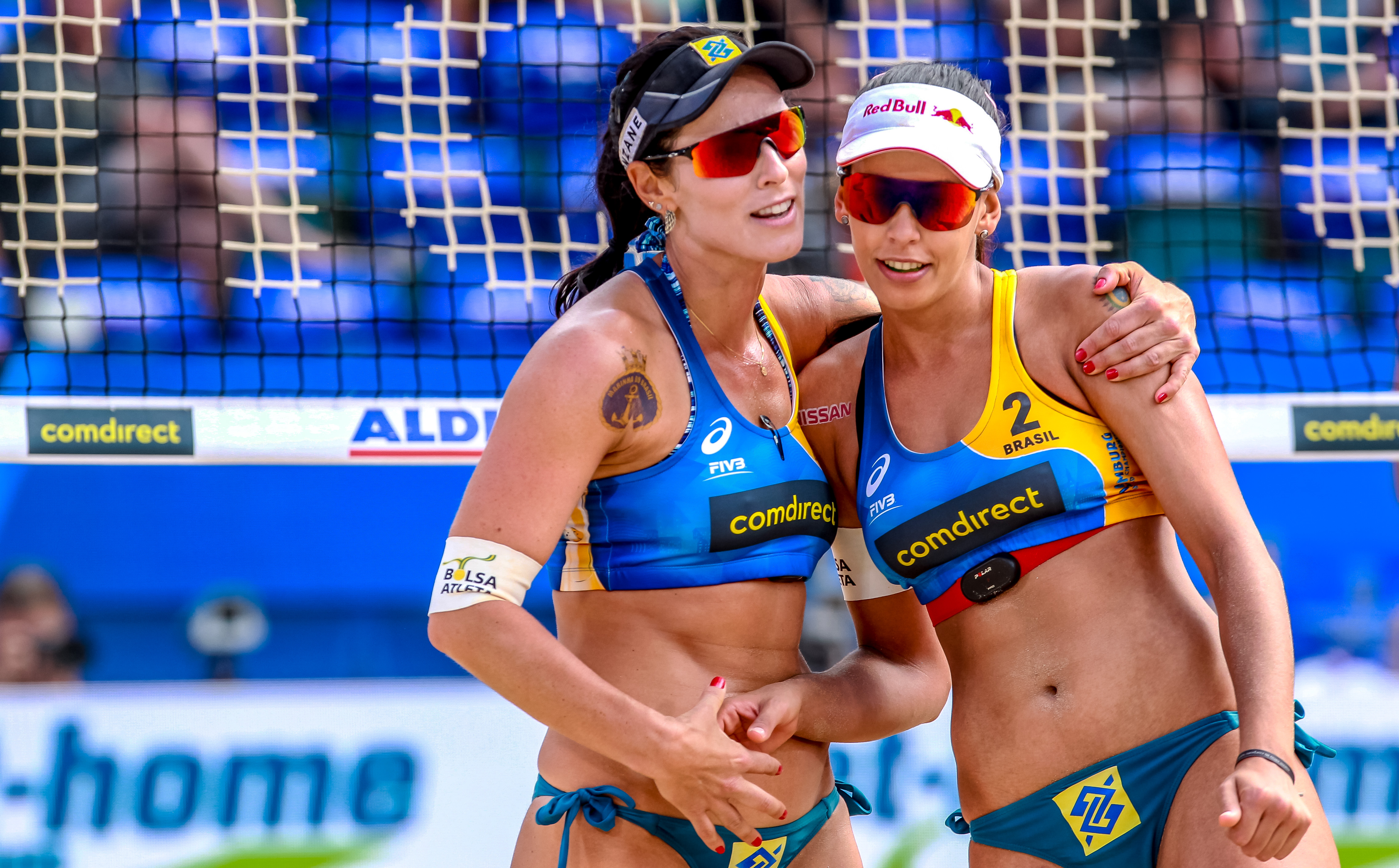 Agatha Bednarczuk (left) and Eduarda "Duda" Lisboa of Brazil
The two teams have met twice this season in FIVB World Tour semi-final matches on back-to-back weekends.  Sweat and Walsh Jennings posted a semi-final win in China on May 26 at Jinjiang with Agatha and Duda avenging the setback June 2 in Ostrava, Czech Republic.
Two men's matches Wednesday feature the players that topped the 2017 Vienna world championship podium as Brazilians Evandro Goncalves and Andre Loyola will team with their new partners to play pairs from Spain and Italy in pool-deciding matches.
Evandro and 2015 world champion Bruno Oscar Schmidt play first at 10 a.m. against Adrian Gavira and Pablo Herrera of Spain in Pool I.  While the Brazilians are playing in the seventh FIVB event together with a gold medal finish in Poland three weeks ago, Gavira and Herrera are competing in their 110th World Tour tournament that ranks sixth all-time in international beach volleyball history.
At 2 p.m. on the Rothenbaum center court, Andre and his new partner George Wanderley meet Daniele Lupo and Paolo Nicolai of Italy in a match to decide Pool H.  Like Evandro and Bruno, Andre and George are competing in their seventh World Tour event together while the Italians have been a fixture on the FIVB circuit since 2011.  Lupo and Nicolai captured the silver medal at the Rio 2016 Olympics after dropping the finale to Alison Cerutti and Bruno.
The 2019 FIVB World Championships continue through the weekend with the women's medal matches Saturday and the men's Sunday.  The winning teams will share the $60,000 first-place prize along with securing a spot for their country in the Tokyo 2020 Olympic Games. 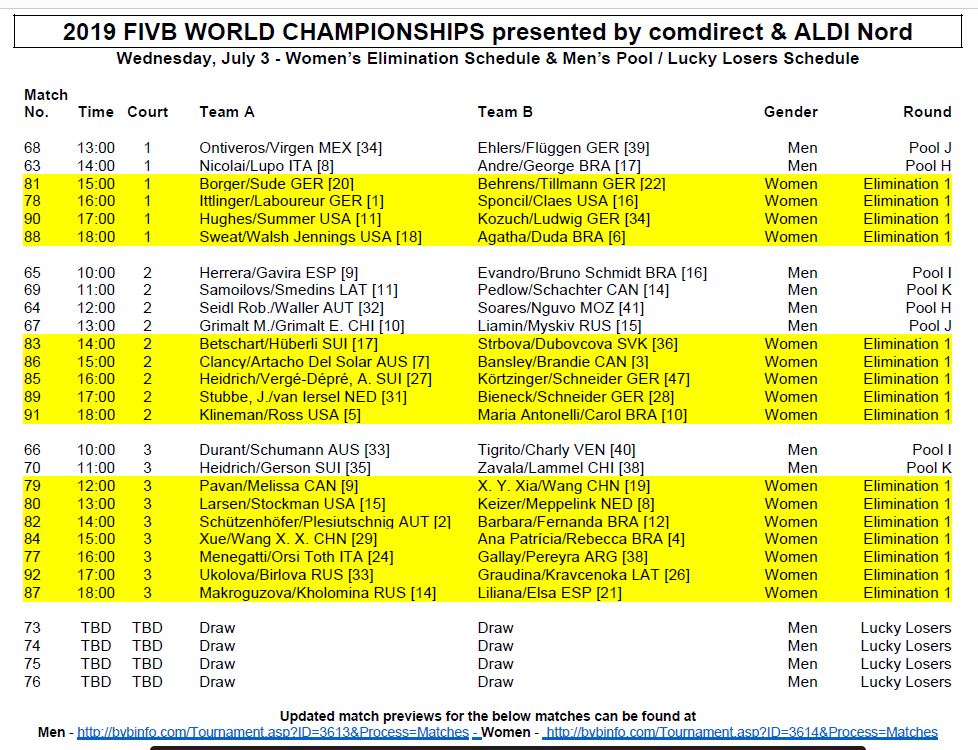