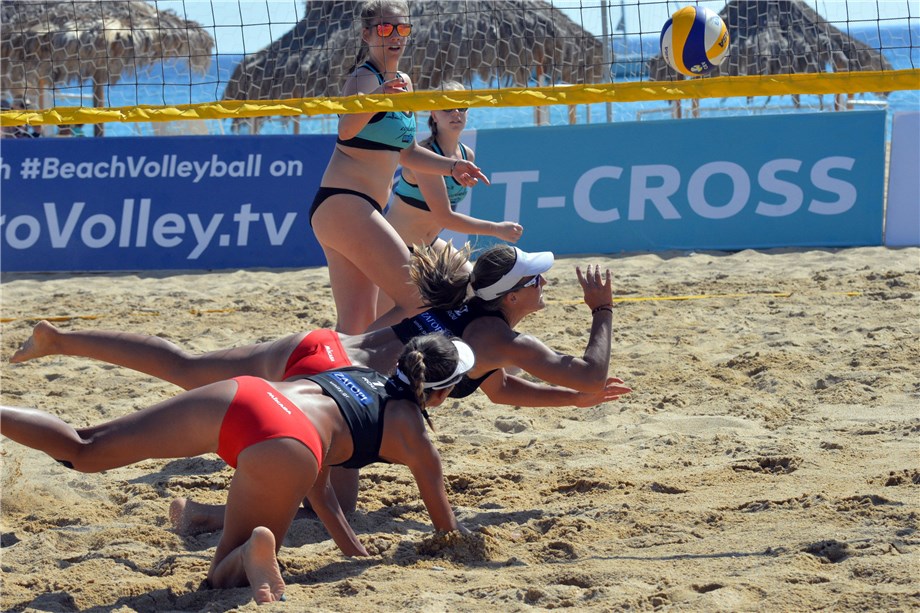 Ioana Alexandra Ordean and Beata Vaida of Romaia try to save the ball in the qualifiers of the 2019 FIVB Beach Volleyball World Tour One Star event in Ios.

Ios, Greece, June 14, 2019 - Turkey's No. 1 and No. 3 seeds crashed out of the 2019 FIVB Beach Volleyball World Tour 1 Star event in the Cycladic island of Ios at the conclusion of the women's Qualification Tournament on Friday, ahead of the 16-team Main Draw which begins Saturday on picturesque Mylopotas Beach.

Joining the Italian and English pairs in advancing to the Main Draw were No. 2 Beata Vaida / Ioana-Alexandra Ordean of Romania who beat Katarina Bulc / Nina Zdesar of Slovenia 2-0 (21-15, 21-10) in the deciding qualifier.

Sunniva Helland-Hansen / Hanne Haugen Zylstra prevailed over fellow-Norwegians Katinka Krahn / Live Johanne Lunde Fossdal 2-1 (16-21, 21-14, 15-9) for the last remaining ticket to the Main Draw in the only qualification match to go to three sets.

The only home team in contention, Greece's Dimitra Karagkouni / Theodora Sarakatsani was eliminated early, after losing to second-seeded Vaida / Ordean 2-0 (21-19, 21-15) in Round 1.

But Greece still has four teams in the Main Draw to keep the local fans entertained, including top-seeded Konstantina Tsopoulou / Dimitra Manavi.

The pair are playing in their 20th FIVB tournament together, including their career-best finish of a silver medal at the Battambang One Star event earlier this year. They have also picked up a bronze this year, at the Langkawi One Star tournament.