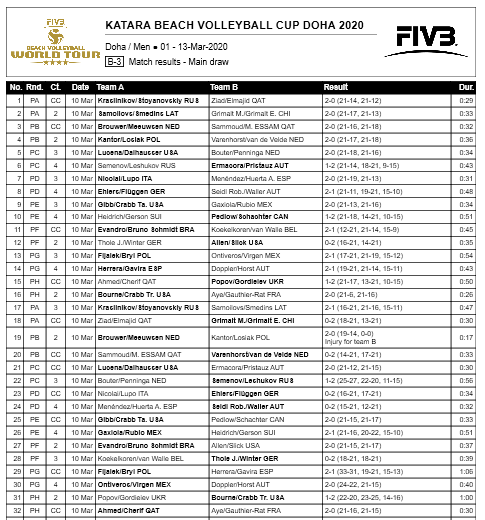 The Russian duo began with a 2-0 (21-14, 21-12) over Qatar’s Benlouaer Ziad and Saifeddine El Majid and then defeated Latvia’s Aleksandrs Samoilovs and Janis Smedins 2-1 (16-21, 21-16, 15-11).
Quick links:
FIVB Beach Volleyball World Tour - Doha
Facebook
Twitter
Instagram
Krasilnikov wrapped up the win over Samoilovs and Smedins with an ace after Stoyanovskiy had brought up the first match ball by dominating at the net.
“It was a really tough game,” Stoyanovskiy said. “They have changed their coach and play differently with more spikes on the second ball. That was a problem for us in the whole match, especially in the first set.
“We found the key to overcome that and we put more pressure on their service to bring them away from the net and that was fruitful for us.”
Stoyanovskiy and Viacheslav enjoyed a stellar 2019 in which they won gold at the Hamburg 2019 FIVB Beach Volleyball World Championships and ended the season by topping the podium at the Rome 2019 FIVB World Tour Finals.
Since November they have been hard at work in Tenerife, Sri Lanka and the national training centre in Anapa on Russia’s Black Sea coast as they set their sights on the Tokyo 2020 Olympic Games.
“We are calmer now and we only focus on our game because we know we can beat any team in the world. We proved that last year and we are working to improve every facet of our game.”
Former world champions Bruno Schmidt and Evandro Goncalves also enjoyed a brace of victories on the opening day of pool play.
First off, they defeated Belgium’s Dries Koekelkoren and Tom Van Walle 2-1 (12-21, 21-14, 15-9) and then rounded off their day’s work by beating USA’s Stafford Slick and William Allen 2-0 (21-15, 21-17).
“Of course, two victories mean it is a good start, it is what everyone is trying to do,” Bruno said. “The air here is so different to Brazil though. It is more humid there and the ball moves differently here, it floats more.
“Then there is the wind which makes it change even more and affects the speed of the ball. It took us a while to adapt in the first match, but that is beach volleyball and you have to adapt. It is the first tournament of the year and everyone is working to adapt to the different conditions.”
The men-only tournament is running from March 9-13 at Katara Cultural Village in the north of the city. It is the second of nine 4-Star events on the 2019-2020 calendar and the winners will leave with 800 ranking points.
Qatar has built up a strong tradition of hosting World Tour events since it hosted its first in 2014. Two more followed in 2015 and 2016, then in 2018 the tournament grew from a 3-Star tournament to a 4-Star tournament.
This website uses cookies to ensure you get the best experience on our website. For more information please read our Cookies Policy.
Ok