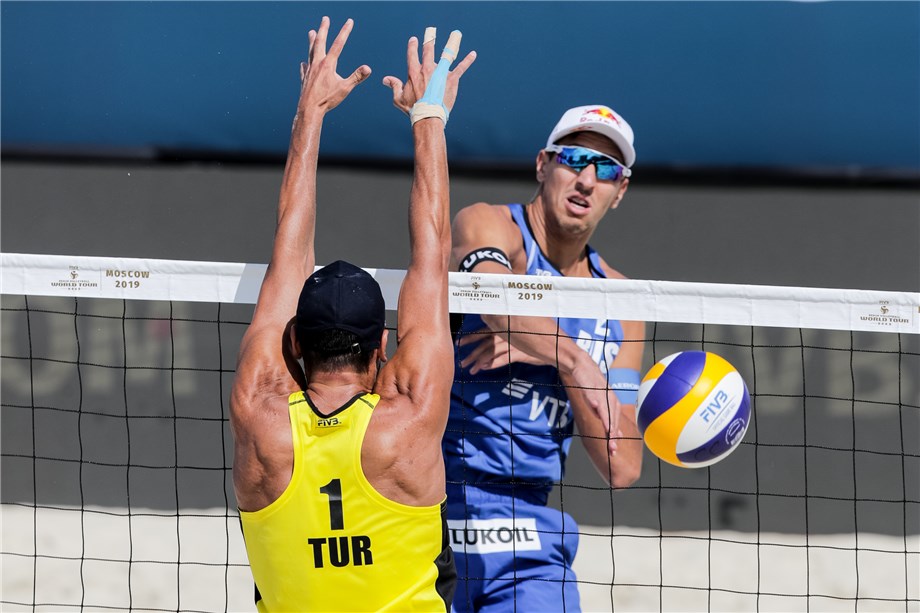 Moscow, Russia, August 16, 2019 – Reigning world champions Viacheslav Krasilnikov & Oleg Stoyanovskiy, who were crowned in Hamburg just over a month ago, feel somewhat disappointed with their results after their triumph at the World Championship, especially with their ninth place at last week’s European Championship at home in Moscow. However, they hope to bounce back quickly at the FIVB Beach Volleyball World Tour four-star stop taking place this week in the Russian capital, and are ready to peak again at next month’s World Tour Finals in Rome.
Krasilnikov & Stoyanovskiy teamed up in October 2018 and immediately piled up a full set of medals in their first three World Tour events together. They maintained the high level through the highlight tournament of the year, the World Championship, where they went on a fantastic winning streak to claim the title.
But at their next World Tour event, in Gstaad, the Russian pair finished 17th, the team’s worst result so far.
“After winning the World Championship, we experienced a slight decline, physical and emotional, which could not but reflect on our results,” 22-year-old blocker Stoyanovskiy told fivb.com.
At the Vienna five-star, Krasilnikov & Stoyanovskiy lost in the quarterfinals. At the European Championship in Moscow last week they went out in the eighthfinals at the hands of 23rd-seeded Austrians Martin Ermacora & Moritz Pristauz.
“We did not get the best result at the European Championship at home. We failed in a game, which we should not have failed in, and we were struck by an unexpected defeat,” 28-year-old defender Krasilnikov said. “I went through a lot in beach volleyball, but this loss, of course, mentally remained in my conscience. I was ashamed. It was embarrassing to come to the matches of our colleagues, because of the big disappointment from failing at the home stage.”
This week, Krasilnikov & Stoyanovskiy are competing again at the Luzhniki sports complex in Moscow. They started their campaign at the four-star World Tour event with two emphatic victories in the pool stage and are already awaiting their next opponents in the round of 16.
“We have high hopes and expectations at this home event on the World Tour,” Stoyanovskiy, gold medallist of the first Youth Olympic Games in 2014, pointed out. “We would like to please our fans after our failure at the European Championship. We will try to add from match to match.”
“The World Tour event is a very serious tournament for us. The strongest duos of beach volleyball gathered here. The level of rivals is impressive,” Rio Olympian Krasilnikov added. “But we can deal with any team. We have proved it and here we will try to prove that the European Championship was just an accident.”
While looking for some immediate remedy at home, the number two team in the current FIVB World Ranking are also planning ahead and looking forward to the next big one after the World Championship, the World Tour Finals in Italy. 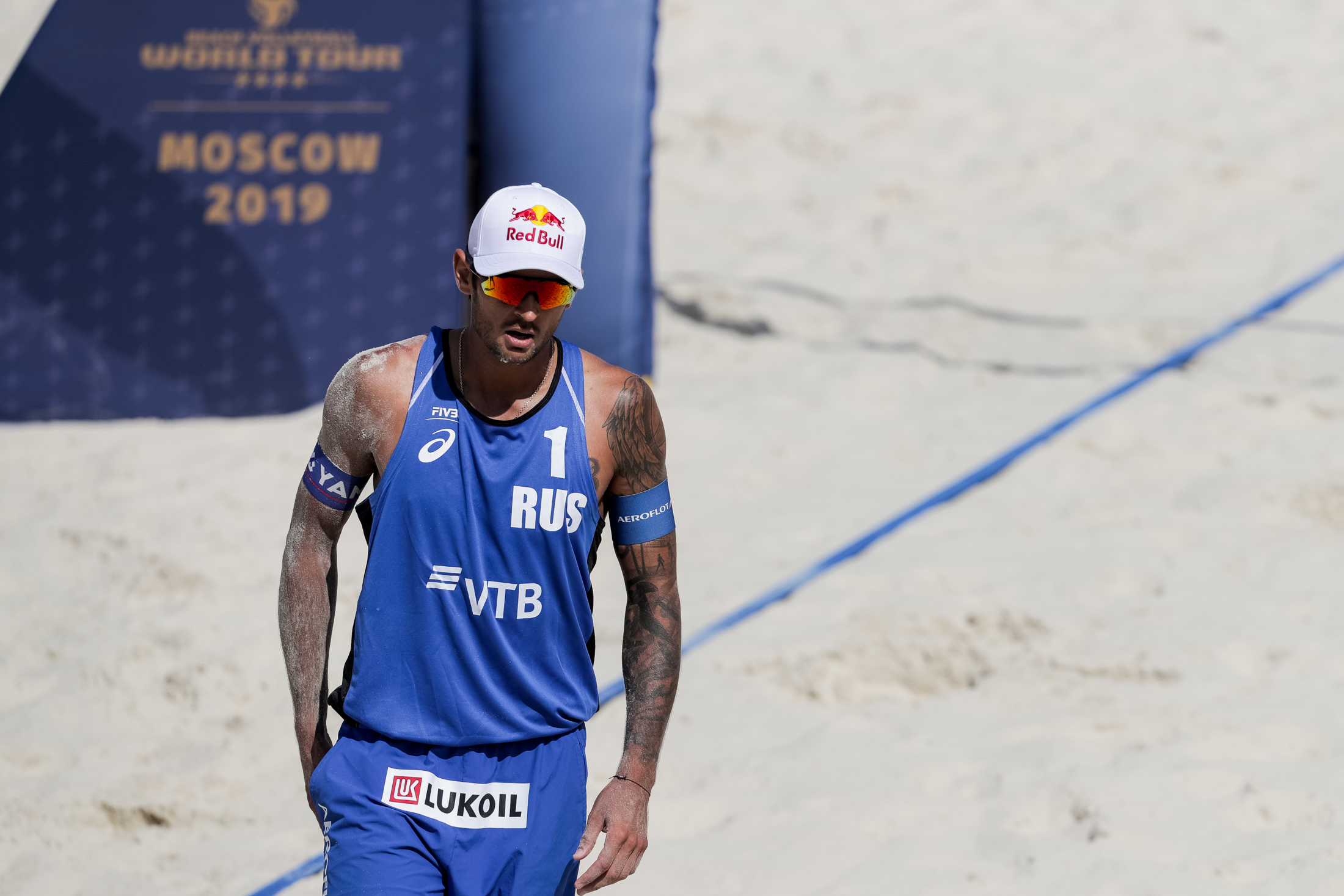 Viacheslav Krasilnikov at centre court of the Moscow four-star event
“We are already thinking ahead about the finals of the World Tour in Rome. We will have a whole training cycle. After Moscow, we will go to Anapa for the finals of the Russian Championship, and then to Sochi for the Cup of Russia. Our training will be built through competitions. We will try to be at the peak of our form at Rome,” Stoyanovskiy stated.
“We are world champions and the season as a whole is very good for us. We were able to let go of what happened and switch our minds to the coming tournaments. After the European Championship, we did a lot of work on our mistakes,” Krasilnikov revealed. “I think that in Moscow we should play much better, and until Rome we will have time to play out all the elements and fine-tune them to the maximum, so I’m sure we’ll have enough strength.”
“We reloaded, trained the elements, now we are full of power and determination to win, and in Rome we will try to show our best volleyball,” Stoyanovskiy confirmed.
The World Tour Finals are scheduled to take place at the Foro Italico in Rome from September 3 through 8.
Quick links - Beach volleyball:
FIVB Beach Volleyball World Tour - Moscow
FIVB Beach Volleyball World Tour Finals - Rome
Facebook
Twitter
Instagram