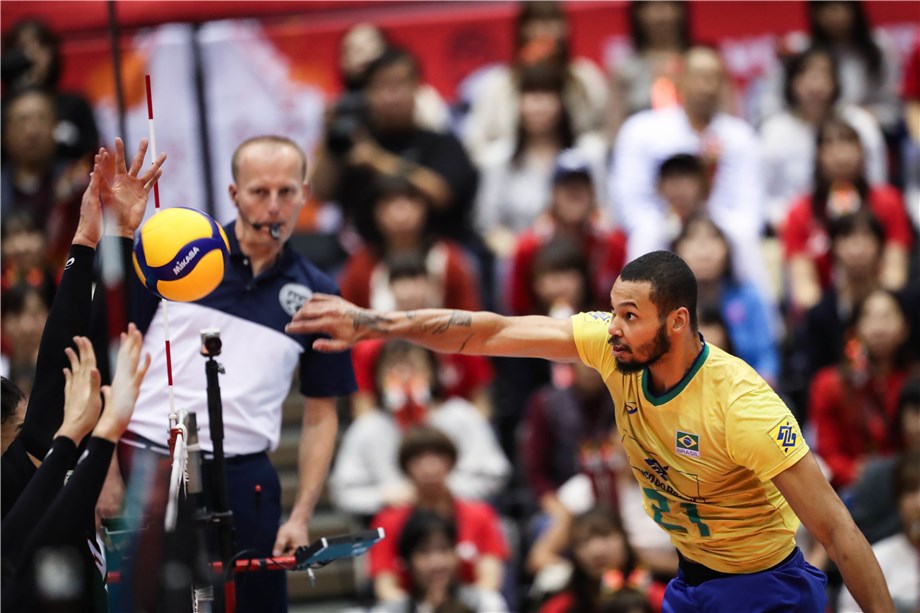 Contagem, Brazil, June 2, 2020 – The 2019 FIVB Volleyball World Cup Most Valuable Player will defend different colours in the next club season as Brazilian opposite Alan de Souza is moving from SESI to Sada Cruzeiro.
The 26-year-old Alan is actually returning to a former club as the opposite first joined Sada Cruzeiro in 2012 to play for the club’s youth team and stayed until 2017, winning two editions of the FIVB Volleyball Men’s Club World Championship and three Brazilian Superligas in the period. After three seasons with SESI, he’s excited to be back with the reigning South American champions.
“I’m very excited about this return,” Alan commented. “This is the club where I became a professional and it really feels like I’m coming back home. I’ve gone from the bottom to winning two Men’s Club World Championships with Sada Cruzeiro and I hope this second stint can be as victorious as the first one.”
Alan was signed to replace Rio 2016 Olympic champion opposite Evandro Guerra, who recently left Sada Cruzeiro. In the club, he’ll join a pair of teammates from the Brazilian national team in setter Fernando Kreling and middle blocker Isac Santos.
The Brazilian club have also announced an international signing in the person of Miguel Angel Lopez from Cuba, will play for Sada Cruzeiro in tthe 2020-2021 season. The 23-year-old outside hitter, who represented his country at the Rio 2016 Olympics, arrives from Argentina’s UPCN Voley and will split the position’s duties with Argentinean star Facundo Conte.
“Sada Cruzeiro is one of the best teams in the world and to know that I’ll be part of such a winning project is very exciting,” he explained. “After playing in Contagem during the South American Championship several fans reached out and asked me to come to Sada Cruzeiro. It’s a team I’ve followed closely as they had important Cuban players in the past and the goal is to contend for every tournament we play at.”
More volleyball from Brazil:
Mauricio Borges joins Taubate's constellation of stars
Rio 2016 MVP Serginho ends glorious career
Gabi: "My big dream is an Olympic medal"
Alan picks Poland, USA and Russia as Brazil's top opponents
Player of the Week: Gabi Guimaraes
Dani Lins targets national team return
Bruno returns home to play for Taubate
Same goal but new plan for Brazil
Weber departs from Club Bolivar to coach Taubate
Quick links:
FIVB.com - Volleyball
Facebook
Twitter
Instagram
Youtube