The double gender 1-star Ljubljana event is the 13th event to be played on the 2019-2020 FIVB World Tour calendar and the fourth international event held in the city since August 2018. It will feature three outdoor courts at the Sports Park Ludus Črnuče and one at Congress Square with specific COVID-19 health and hygiene related guidelines in place in line with requirements from the Slovenian national authorities.
Quick links:
FIVB Beach Volleyball World Tour - Ljubljana
Olympic Games Tokyo 2020
Facebook
Twitter
Instagram
Youtube
A total of 12 teams per gender have automatically been placed in Friday's opening main draw rounds with the final four pairs coming from Thursday's single-elimination qualification tournament. Following modified pool play, the 12-team single-elimination knockout rounds start on Saturday with the medal matches on Sunday. 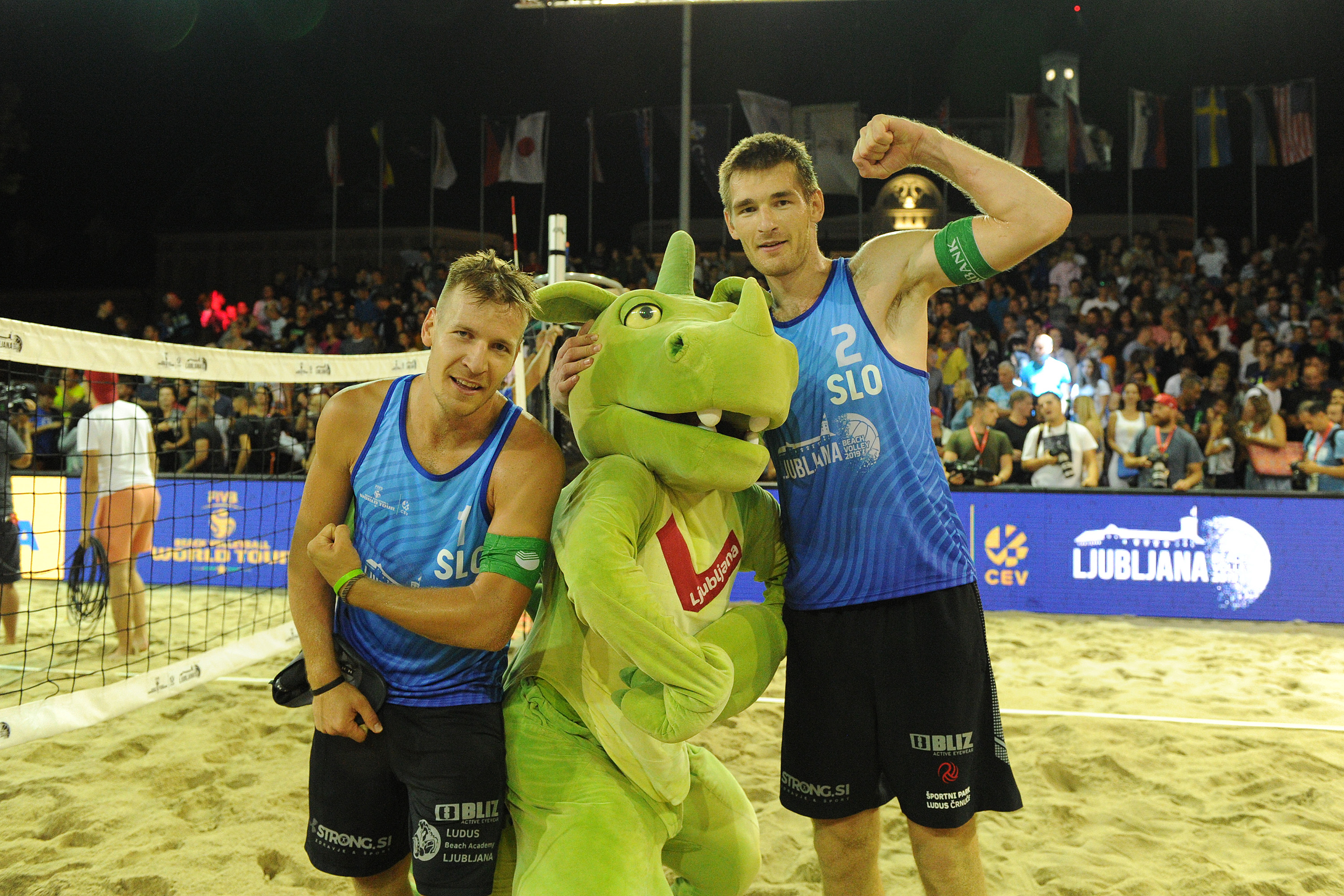 The 2019 Ljubljana winners Tadej Boženk (left) and Vid Jakopin of Slovenia
Pokersnik and Zemljak also placed second in the inaugural Ljubljana event on August 5, 2018 as the Slovenians dropped a 2-0 (21-14, 21-17) gold medal match in 32 minutes to Taras Myskiv and Valeriy Samoday of Russia. Victory at the November 2018 Ljubljana event went to Aliaksandr Dziadkou and Pavel Piatrushka of Belarus.
A new women's champion will be crowned on Sunday as pairs from Switzerland (Esmée Böbner/Zoe Vergé-Dépré, August 2018), Greece (Vasiliki Arvaniti/Penny Karagkouni, November 2018) and the Ukraine (Inna and Iryna Makhno, August 2019) captured the first three Ljubljana titles but will not participate this week. 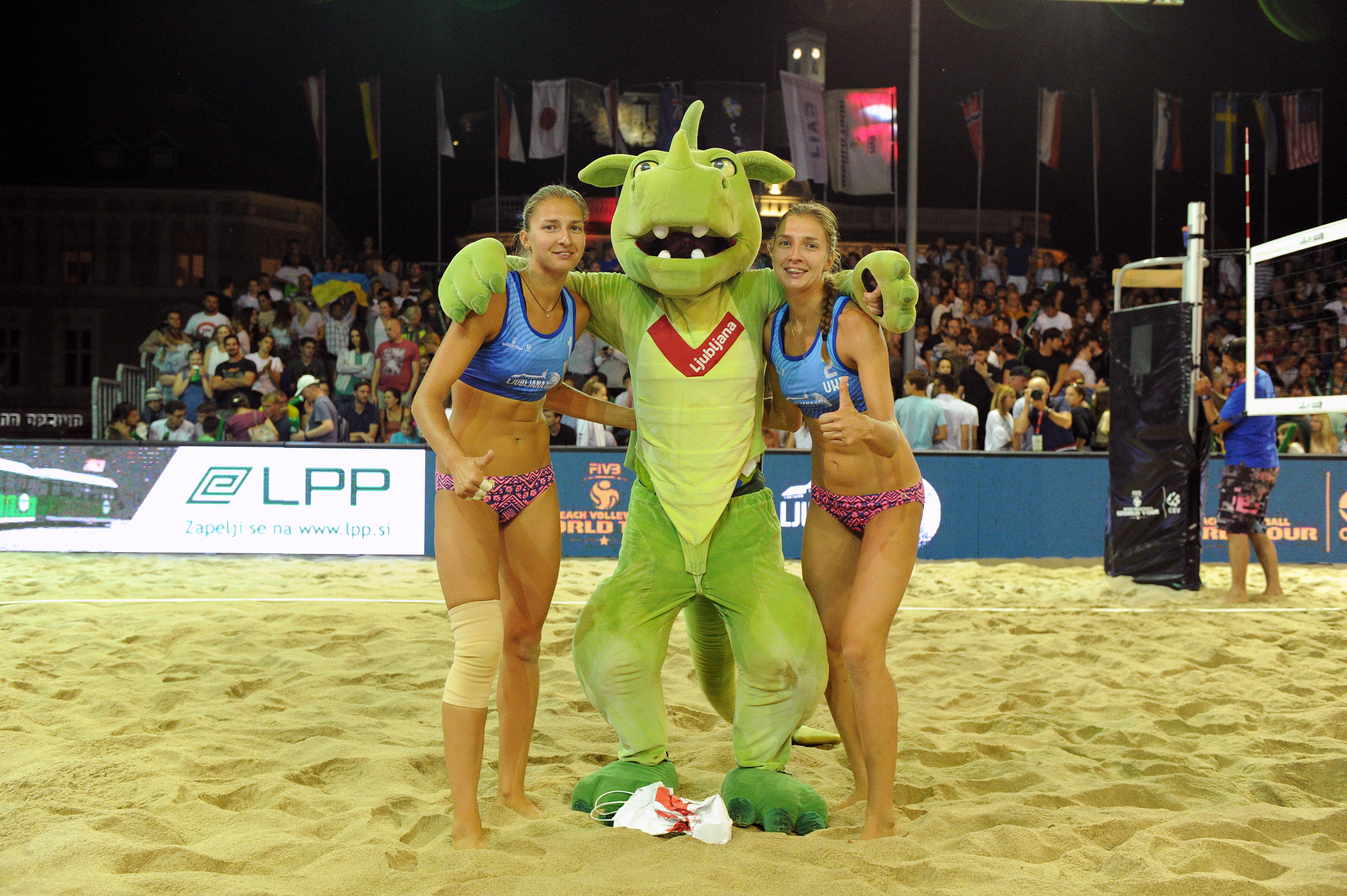 The 2019 women's gold medal winners Inna (left) and Iryna Makhno of the Ukraine
Following this week's event, the next World Tour tournaments will be played in Europe starting with a stop from August 20-23 for men's and women's tournaments in Baden, Austria. The following event is scheduled to take place in Montpellier, France from August 25-29.

Due to the COVID-19 pandemic and the travel restrictions and limitations in place, the FIVB Ranking System has been frozen since March 16, 2020 and no ranking points will be allocated at the Ljubljana 1-star. The FIVB will continue to monitor all global travel restrictions and access to competitions ahead of every single World Tour stop. As the situation is constantly evolving, further announcements will be made in the coming weeks on the possible resumption of the Ranking System. This will depend on securing the fair access of all eligible participants to events, and details will be communicated in the Event Regulations of each scheduled event.

Read more:
Beach volleyball returns with four World Tour events confirmed for late summer
Team of the Week: Doppler and Horst
This website uses cookies to ensure you get the best experience on our website. For more information please read our Cookies Policy.
Ok