Xia making a name for herself 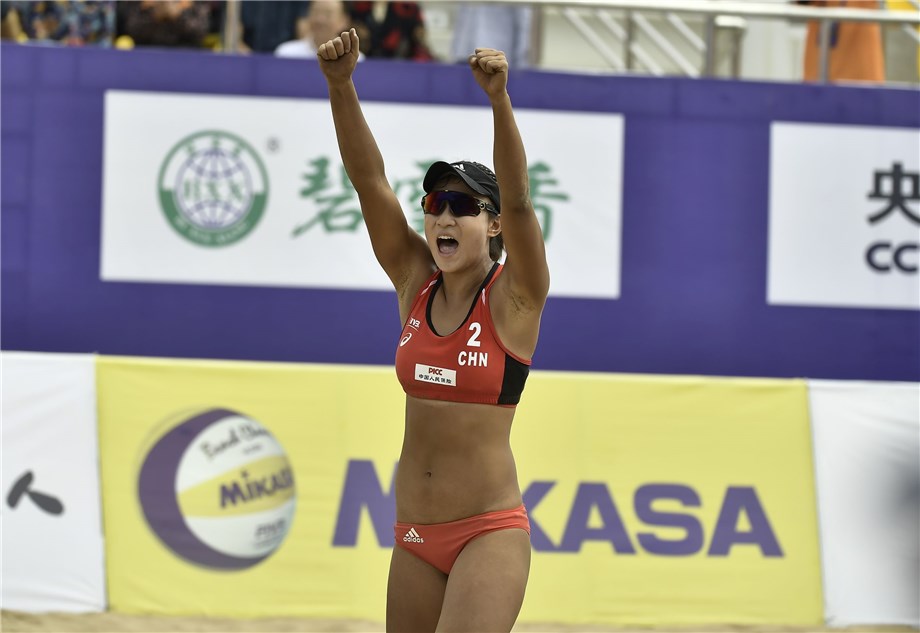 Haiyang, China, September 20, 2019 - Over the past four seasons, the international beach volleyball community has been amazed with the achievements of young Brazilian Eduarda "Duda" Lisboa.
Quick links - Beach volleyball:
Tokyo Beach Volleyball Qualification - Haiyang
Facebook
Twitter
Instagram
But unnoticed are the exploits of 22-year-old Xinyi Xia, who is playing here this week in the FIVB Tokyo Beach Volleyball Olympic Qualification Tournament for China with Fan Wang as the top-seeded team in the women's competition.
The 21-year-old Duda finished the 2017-2018 season as the FIVB World Tour most outstanding player and is a leading candidate to retain the honour for the 2018-2019 campaign where she and Agatha Bednarczuk are currently the No. 4-ranked team on the international listing.
But Xia has accomplished a lot as she is the youngest men's or women's player to ever win an FIVB World Tour gold medal. As a 16-year-old in 2013 and competing on the international circuit for the first time, she posted podium-topping finishes with Chen Xue at November and December events in Thailand (Phuket) and South Africa (Durban), respectively.
Since then, Xia has played in 66 World tour events and amassed eight podium placements, 10 final four finishes and a third gold medal in June 2017 with Shuhui Wen at Nantong, China. Xia has posted a 154-118 World Tour match mark with six different partners the past seven season.
With success does come disappointment as Xia and Xue missed qualifying for the Rio 2016 Olympic Games after losing in the semifinals of the Continental Cup Finals in Russia where the Chinese pair was ousted by Barbara Hermannova and Marketa Slukova of the Czech Republic.
"Getting to Olympics Games has been my goal forever," said Xia on Friday morning after her team's setback to Elsa Baquerizo/Liliana Fernandez of Spain 2-1 (21-11, 17-21, 11-15) in a 46-minute Pool I match.  "It was a shame we didn't qualify for Rio and playing well in Sochi before losing to the Czech girls."
Hermannova and Slukova also stand in the way of Xia and Wang's advancement to the women's Tokyo qualifying matches Sunday as the two teams play Saturday morning for the second time this week. On Wednesday, Hermannova and Slukova posted a 2-0 (21-12, 23-21) Pool A win in 38 minutes over Xia and Wang.
Before meeting the Czechs on Saturday, Xia and Wang must defeat Katarzyna Kociolek and Kinga Wojtasik of Poland to have a chance to reach Sunday's final. Nearly two months ago at the Olympic dress rehearsal event in Tokyo, the Chinese pair defeated Kociolek and Wojtasik 2-0 (21-16, 21-15) in a 38-minute elimination match.
Currently 23rd on the FIVB World Tour ranking list, Xia and Wang's Olympic quest will not end if they fail to reach Sunday's final matches.  The Chinese pair still has pathways to Tokyo via the FIVB Olympic ranking list or via the Continental Cup competition for Asia. Entering this week's competition, Xia and Wang are currently ranked 13th on the Tokyo FIVB Olympic provisional listing.
"It has been a good season for us," said Xia. "It is great to be playing this event in China as we appreciate the support of the fans watching our matches this week. I hope we can reach the finals on Sunday, but it will be tough after losing to the Spanish team. Winning the next two matches are a must."