Xiamen: Samoilovs & Smedins back in business 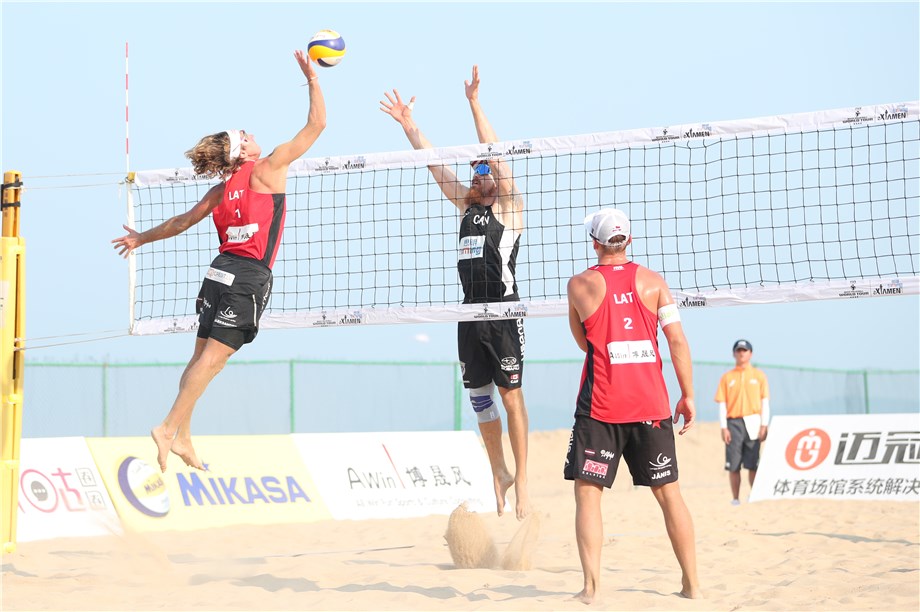 Xiamen, China, April 25, 2019 - Aleksandrs Samoilovs and Janis Smedins are back in business, topping their pool with two wins at the 2019 FIVB Beach Volleyball World Tour Xiamen Open.
Quick links - Beach volleyball:
FIVB Beach Volleyball World Tour - Xiamen
FIVB.com - Beach volleyballFacebookTwitterInstagram
Samoilovs/Smedins return to Xiamen for a fifth edition, winning bronze in 2015, and have been waiting to shake the poor result from Doha in March where the team ended in pool play. The Latvians first defeated Germans Max Betzien & Jonathan Erdmann, 2-0 (21-10, 21-12), before facing Sam Pedlow and Sam Schachter from Canada.
The two teams could be seen altering their game in an attempt to outmanoeuvre the other and despite Samoilovs/Smedins taking the first set, Pedlow/Schachter pushed the second all the way to 27-25 and into the tie-break. The seasoned Latvian pair were determined for the pool win and ended the match, 2-1 (21-17, 25-27, 15-9). 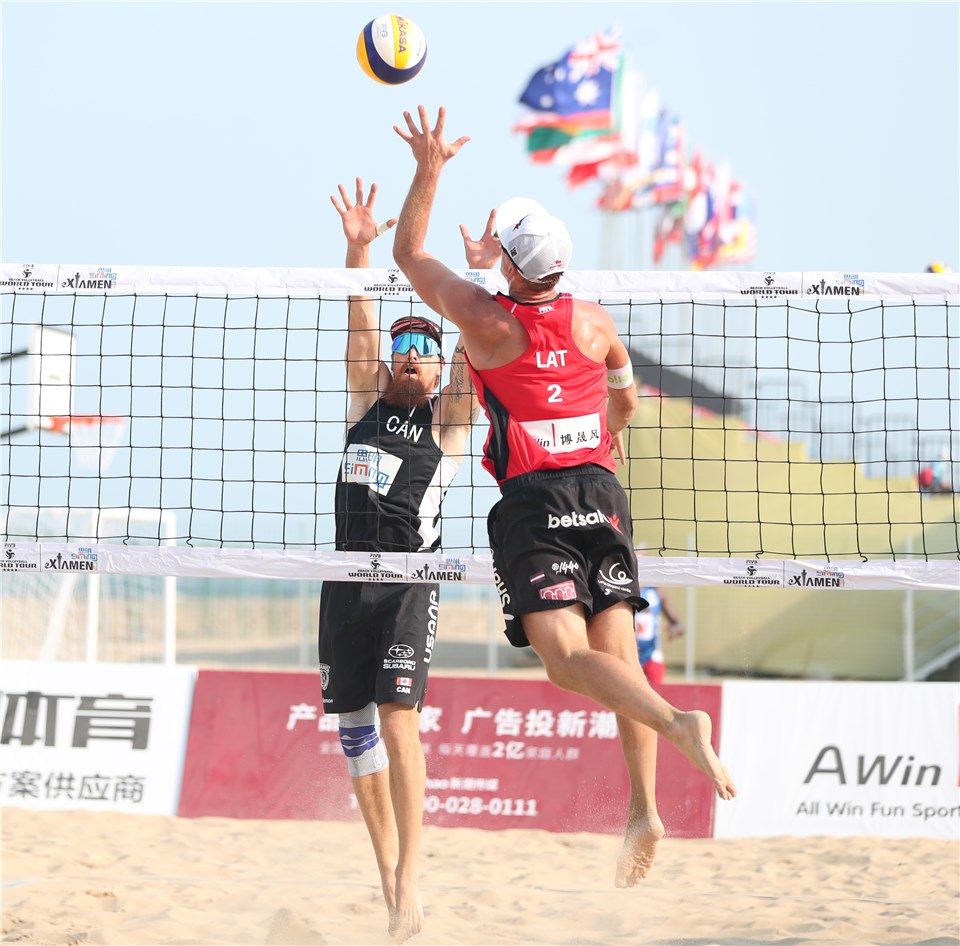 Janis Smedins faces Sam Pedlow during Xiamen pool play
“It was a very close match, especially we didn’t get our service in the second set with pressure and I made too many easy serve errors. We had three or five match balls in the second set and I managed somehow to give them all away. But in the third set Aleks put in some good blocks out of the reach of Sam’s reception and he started to struggle and make errors. If you are leading in the third set by five points of course it’s easy for you to play to the end,” said Smedins.
Samoilovs/Smedins had 4-Star form in 2018, winning the Espinho 4-Star and Moscow 4-Star and taking bronze at the Warsaw 4-Star. They also took bronze at the Fort Lauderdale 5-Star, but the poor result in Doha made the team reflect.
“We feel great, we won our pool. It always feels great, especially in such a strong tournament, all the teams are here so it’s the highest level of beach volleyball at the beginning of the season. We started really bad in Doha, 25th, I think the worst result in our career together. So we had time to think about this and get motivation back,” said Samoilovs. 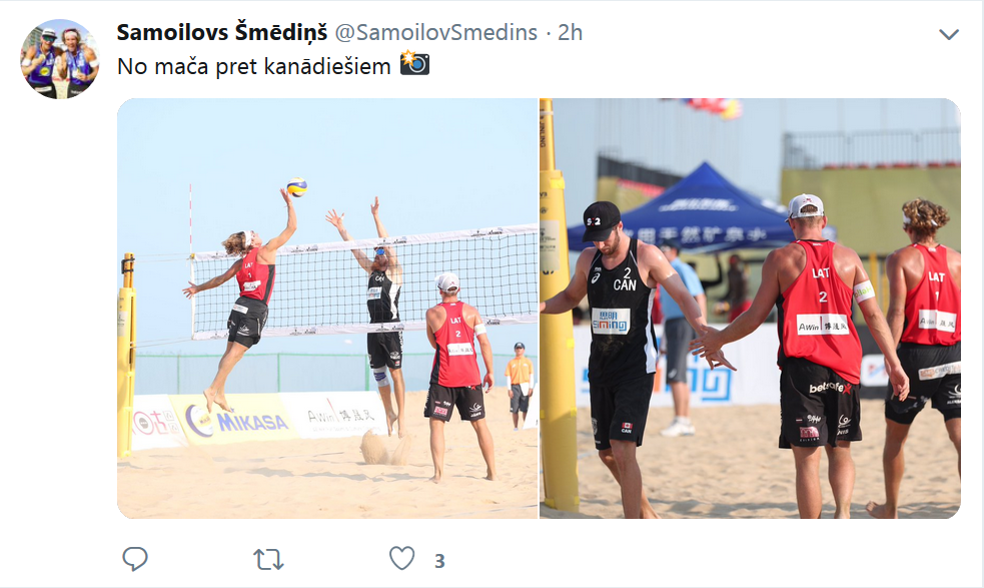 “I think we were too heavy before Doha, we practiced too much and we didn’t recover before the tournament, so our main change is that we came five days before the tournament to China, not three days before, so we needed a little bit more time to recover and now we feel much better,” said Samoilovs.
The pair are currently ranked third in the world and also have this year’s Hamburg World Championships in their mind.
“The World Championships is very far away, there are too many tournaments before that, but it’s every team's goal to play well there and that’s for sure our goal also to show our best game there. We have time to improve ourselves and I hope we’ll be ready,” said Smedins.
As expected with such a strong field in Xiamen, there were some big clashes among the pool matches. Spain's Pablo Herrera and Adrian Gavira defeated Marco and Esteban Grimalt in the tie-break, 2-1 (21-18, 17-21, 15-12) while Qatar’s Cherif Younousse and Ahmed Tijan continue their winning form defeating Alison Cerutti and Álvaro Morais Filho, 2-0 (21-15, 21-14). 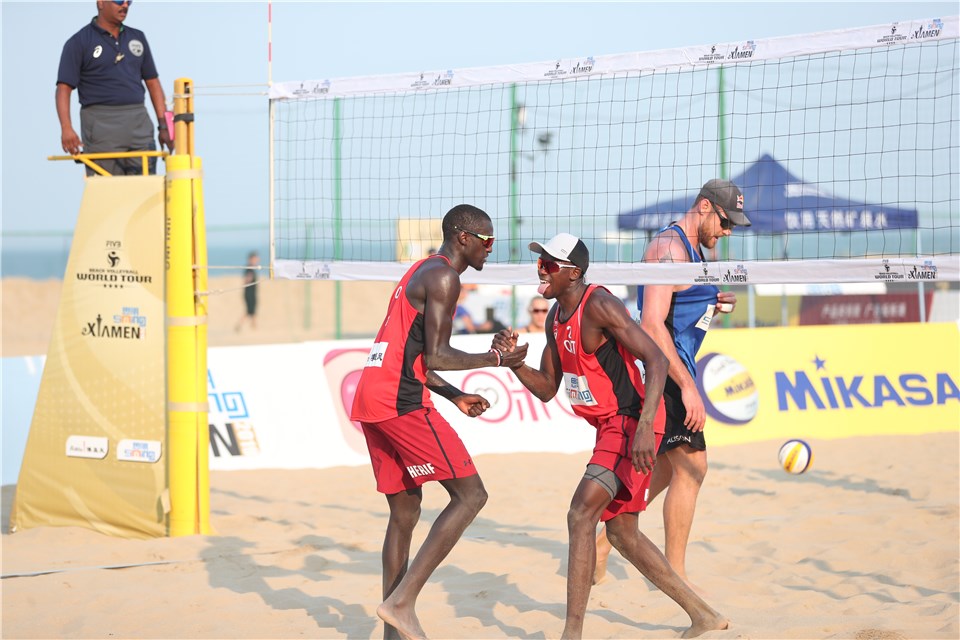 Qatar’s Cherif Younousse and Ahmed Tijan top their pool
In the longest match of the day, Enrico Rossi and Adrian Ignacio Carambula Raurich's fierce battle against Brazilians Andre Loyola Stein and George Souto Maior Wanderley lasted 57 minutes, with the Italians emerging victorious, 2-1 ( 21-19, 20-22, 19-17).
China’s Gao Peng and Li Yang gave Alexander Brouwer and Robert Meeuwsen a tough time in their second pool match. The Chinese team defeated USA’s Stafford Slick and William Allen in the morning before pushing the Dutch men all the way in the tie-break. The final win for Brouwer/Meeuwsen, 2-1 (21-14, 16-21, 19-17), places them at the top of their pool.