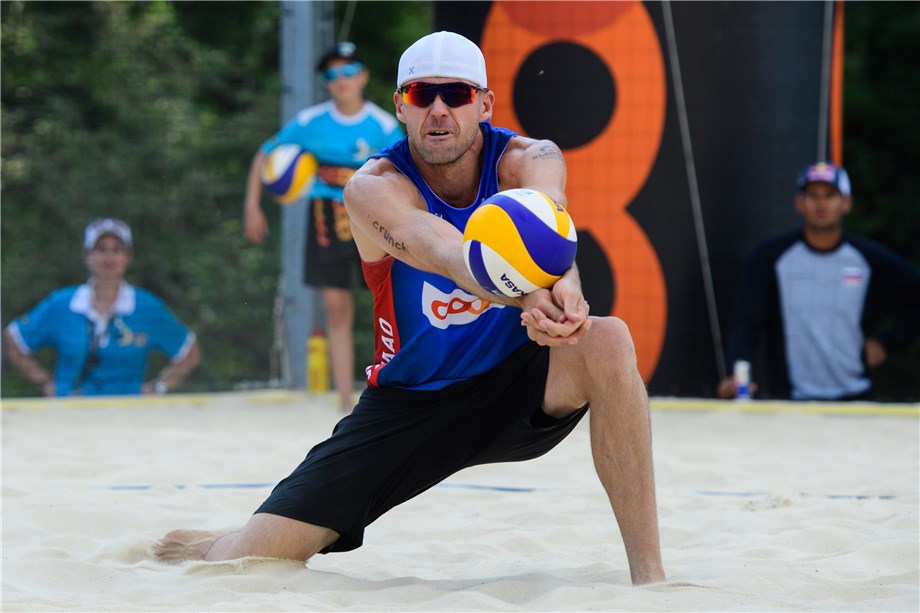 Gstaad, Switzerland, July 14, 2018 - For the second-straight week on the FIVB World Tour, a player over the age of 40 will be competing in a men’s semifinal as 42-year old Jake Gibb and his American partner Taylor Crabb challenge an up-and-coming Norwegian tandem with a combined age of 43 here Saturday.
Quick links - Beach volleyball:
FIVB Beach Volleyball World Tour - Gstaad Major
FIVB.com - Beach volleyball
Latest Videos
Facebook
Twitter
Instagram
With both teams winning their first four matches in the $600,000 Gstaad Major, 15th-seeded Anders Mol and Christian Sorum of Norway will be seeking to become the third-youngest team to win a men’s FIVB World Tour while Gibb will be bidding to become the oldest player to top an international beach volleyball podium. 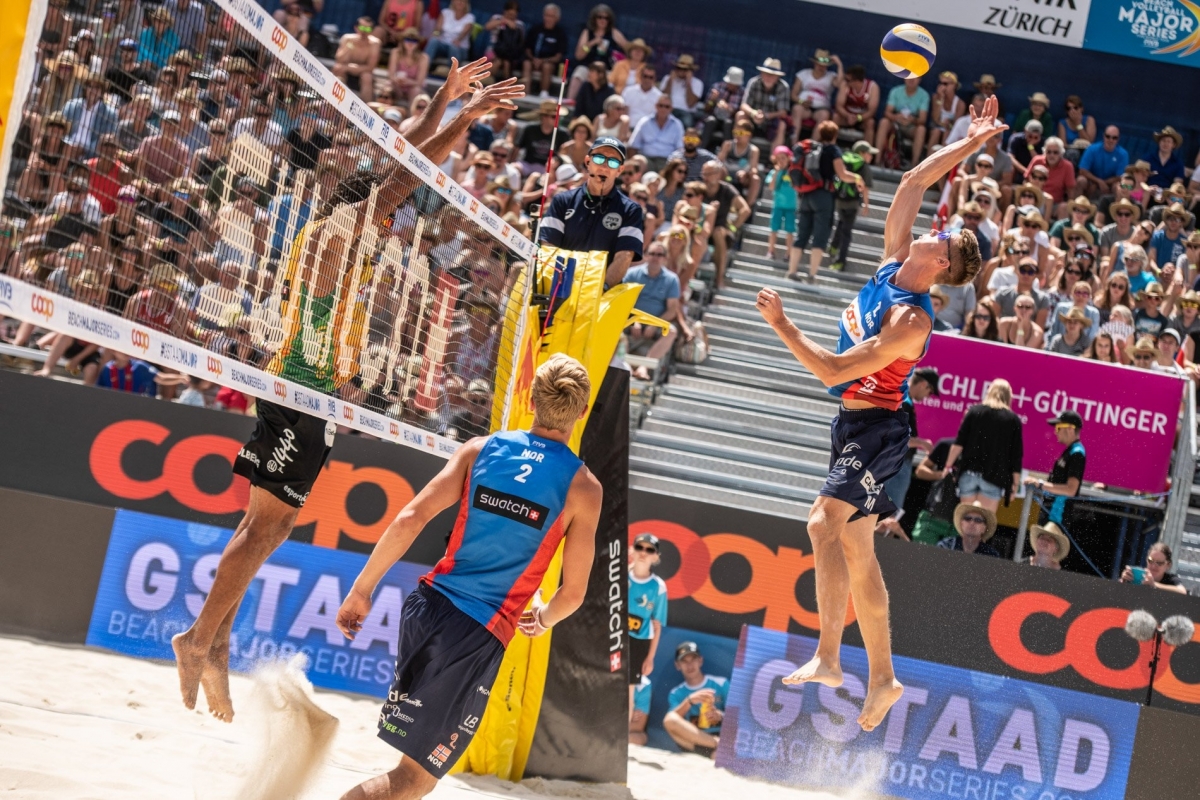 Anders Mol (right) and Christian Sorum (centre) of Norway competing against Brazil on Friday
Mol, who had his 21st birthday 12 days ago, and the 22-year-old Sorum are also seeking to become the first Norwegian team to win a FIVB World Tour gold medal since 1998. The last beach duo from the Scandinavian country to top a World Tour podium was Vegard Hoidalen and Jorre Kjemperud on July 5, 1998 who defeated Guilherme Marquez/Para Ferreira of Brazil in the Berlin finale.
That gold medal was earned at FIVB men’s event No. 77 with the Gstaad Major being No. 400. That is a span of 7,314 days to today in Gstaad since Hoidalen/Kjemperud's victory for Norway’s eighth and final gold medal at a FIVB World Tour event.
For Gibb, he is trying to accomplish the oldest player feat that 43-year old Ricardo Santos was seeking last week in Portugal when the legendary Brazilian and his partner Gustavo "Guto" Carvalhaes dropped the Espinho finale to Latvians Janis Smedins/Aleksandrs Samoilovs in three sets.
American John Hyden holds the record for being the oldest player to win an FIVB World Tour for either men or women when he, at 41, and Tri Bourne captured an international beach volleyball event in Germany by defeating compatriots Ryan Doherty and Nick Lucena in the 2014 all-American finale in Berlin.
For the 26-year old Crabb, he will also be seeking to match an accomplishment by his older brother Trevor, who won a 2018 FIVB World Tour event on May 13 in Switzerland with John Mayer as the pair defeated Serbians Stefan Basta/Lazar Kolaric in the two-set Lucerne finale. 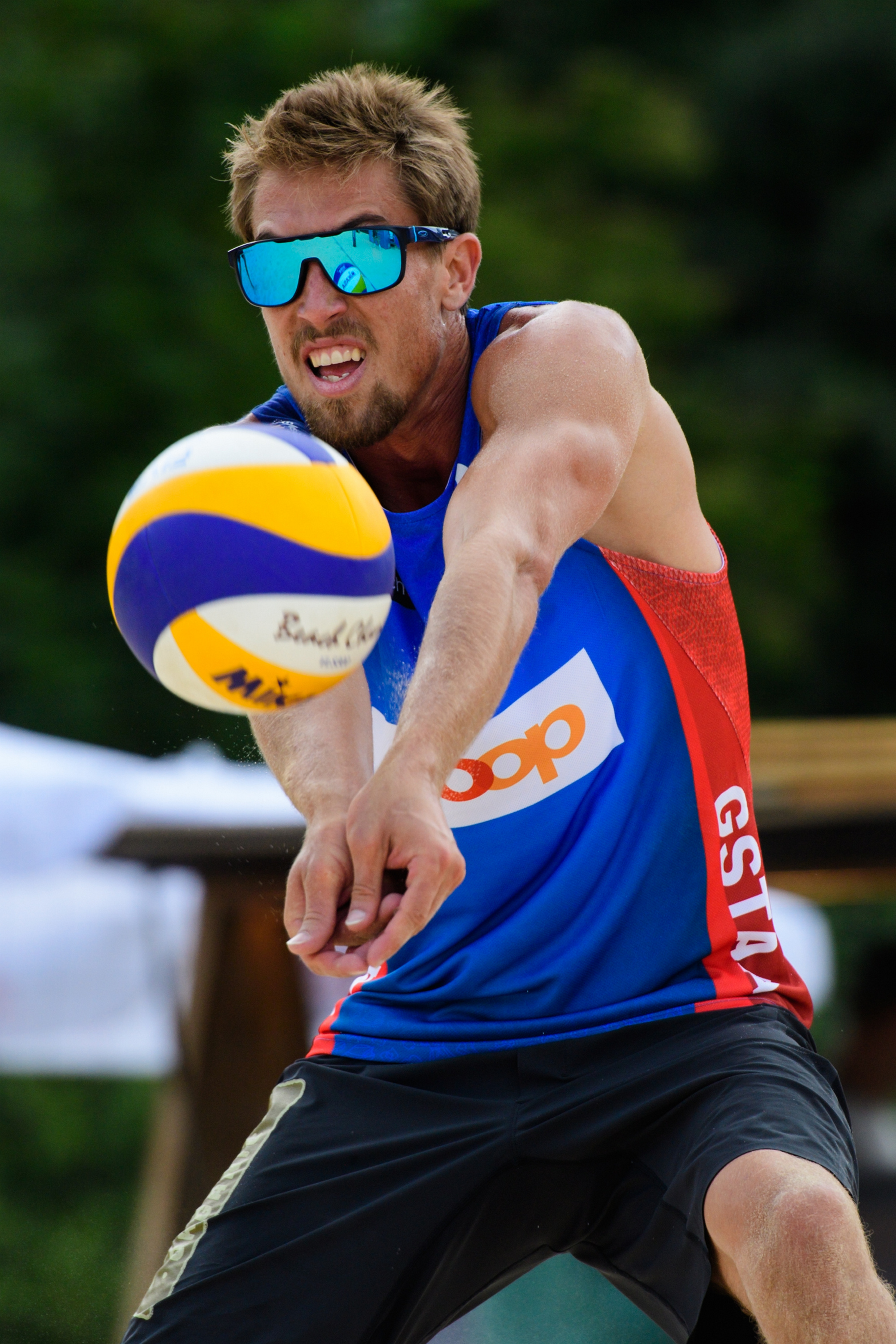 American Taylor Crabb
Saturday’s second men’s semifinal is a possible preview for next week’s gold medal match at the European Championships in the Netherlands as Italy’s Daniele Lupo/Paolo Nicolai meet Adrian Gavira/Pablo Herrera of Spain. Lupo and Nicolai are the reigning continental champions and won the 2014 European title. Gavira and Herrera topped the European championship podium in 2013.
The Italians and Spanish have each won three FIVB World Tour gold medals and the series between the two teams is tied at 7-7. The two teams have met twice on the European circuit and each won a match. 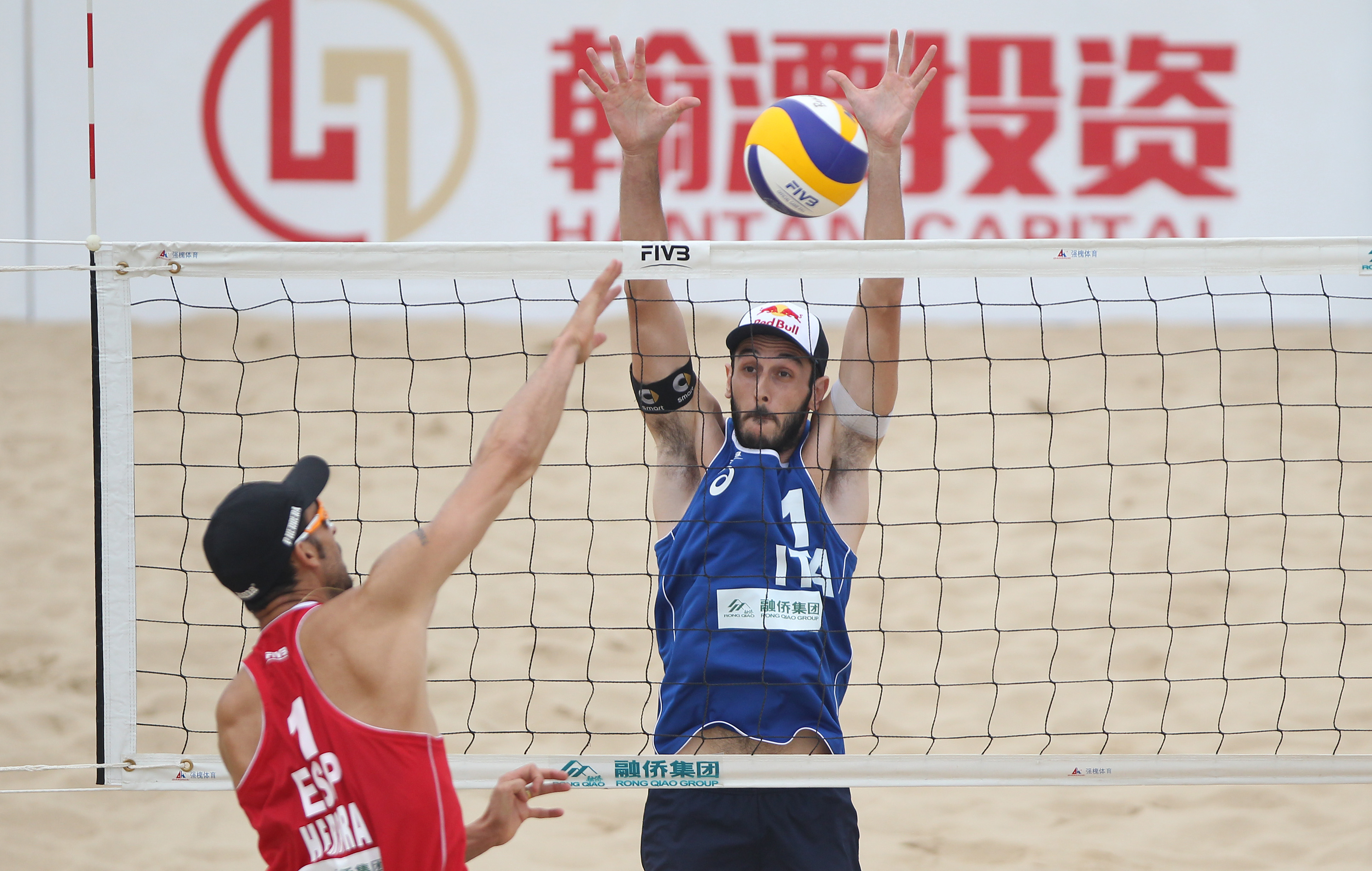 Paolo Nicolai (right) of Italy blocks against Pablo Herrera of Spain in a 2016 semifinal match at Fuzhou, China