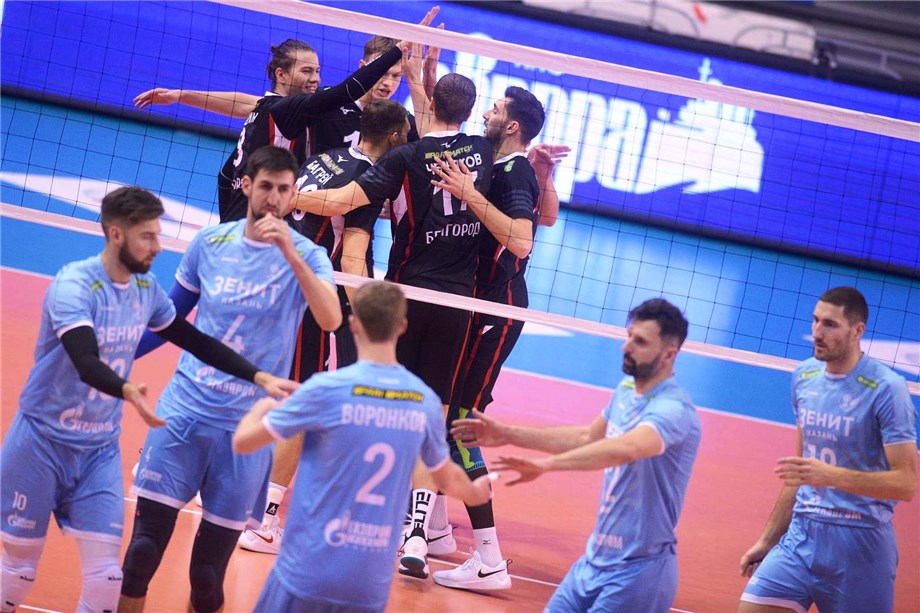 Belgorod, Russia, November 17, 2020 – Belogorie Belgorod stunned Zenit Kazan in a five-set match to hand Vladimir Alekno’s squad their first defeat of the Russian Superliga season on Monday.
20-year-old Russian junior international Egor Sidenko who subbed in for Italian star Gabriele Nelli during the game was the hero of the day emerging as Belogorie’s best scorer in the 3-2 (25-20, 17-25, 25-21, 21-25, 15-13) victory over Zenit. The 1.98m-tall opposite, who was on the Russian squad that reached the semifinals of the 2019 FIVB U21 Volleyball World Championship and won gold at the 2018 CEV U20 European Championship, came in as a substitution during the first two sets of the match, but then made Belogorie’s starting line-up for the next three. He finished with 16 points to his name, including an ace and a block, registering a 58% success rate in attack.
Another 20-year-old, outside Pavel Tetyukhin, who was also a member of last year’s U21 national team at the World Championship in Bahrain, impressed with four aces, including three in a row in the fifth set, towards a 13-point total, while former junior international Sergey Chervyakov tallied 14 points, including four blocks, for Belogorie.
Zenit’s Polish star Bartosz Bednorz was the best scorer of the match on 23 points, including four aces and two blocks.
It was only Belogorie’s second win in six matches played since the start of the Superliga season and the team moved up to the 11th place in the standings. Zenit are still the table leaders on a 10-1 win-loss record, but now second-placed Dinamo Moscow are the only undefeated team in the league boasting a record of five victories in five matches. Next down the standings are Zenit Saint Petersburg and Kuzbass Kemerovo, on 5-2 each.
More volleyball from Russia:
Russia Cup semifinalists – three qualified, one to be decided
Ten blocks by Fetisova pull Dinamo through tough five-setter
Women’s Russia Cup final four emerge
Muzaj picks up pace after recovery
Zaytsev leads Kuzbass to complete turnaround against Fakel
Krasnodar mount full comeback against Moscow in battle of Dinamos
Great new debut for Kosheleva at Galatasaray
Sokolov keeps Dinamo on perfect wave
Near-perfect Krsmanovic as Kuzbass extend victorious streak
The Club: Zenit Kazan
Luburic, Brizard ace away in Russia
Stars deliver in spectacular clash between Dinamos in Russia
Bednorz on fire as Zenit claim eighth Russia Super Cup trophy
One of the largest volleyball centres in Siberia opens ahead of FIVB Volleyball Men's World Championship 2022
Historic Super Cup trophy completes Dinamo Kazan’s showcase
Unpredictable season ahead after stellar shuffles in Russian Superliga
38 points from Parubets not enough to prevent major upset in Russia
Star-studded women’s Superliga set to begin in Russia
Dinamo Moscow, Tulitsa Tula - only unbeaten teams in Russia Cup
...
Quick links:Olympic Games Tokyo 2020FacebookTwitterInstagramYoutube