Lausanne, Switzerland, June 10, 2019 – Her team has yet to win a match at the ongoing women’s 2019 FIVB Volleyball Nations League, but determined libero Zhana Todorova has learned that by competing against world-class rivals in the top-tier, five-week-long tournament, debutants Bulgaria can improve in leaps and bounds in the near future. At the same time, 170-cm-tall Todorova has shown some impressive individual stats, especially in defence, and has emerged as the best digger in the VNL so far.

Lausanne, Switzerland, June 10, 2019 – Her team has yet to win a match at the ongoing women’s 2019 FIVB Volleyball Nations League, but determined libero Zhana Todorova has learned that by competing against world-class rivals in the top-tier, five-week-long tournament, debutants Bulgaria can improve in leaps and bounds in the near future. At the same time, 170-cm-tall Todorova has shown some impressive individual stats, especially in defence, and has emerged as the best digger in the VNL so far. The 22-year-old athlete from Plovdiv has an average of 3.56 digs per set next to her name on top of the chart, leading the following players in the ranking by a wide margin.
Despite this long losing streak, what are the positives of Bulgaria’s participation in the VNL so far?
Zhana Todorova: We tried our best to win every match we contested, but it was not that easy. In fact, we are a very young team and I think there is a lot of room for improvement. The VNL gives us very important experience to make the team much stronger in the next couple of years. It’s a bit unlucky that Bulgaria have yet to win a match in this prestigious tournament. I don’t want to say that we did not play well. Every participating team is very strong and we have to give more than 100 per cent to win a game. Still, our determined efforts have yet to be handsomely rewarded.
However, Bulgaria are one of the four challenger teams, along with Belgium, Dominican Republic and Poland, and now face an imminent threat of relegation...
Zhana Todorova: I don’t think much about the relegation. What all my teammates and I need the most is to gain more competition experience. By competing against world-class opponents in this tournament, we can sharpen our skills and the improved performance will turn into a great asset and a bright prospect for Bulgarian women’s volleyball in the future. 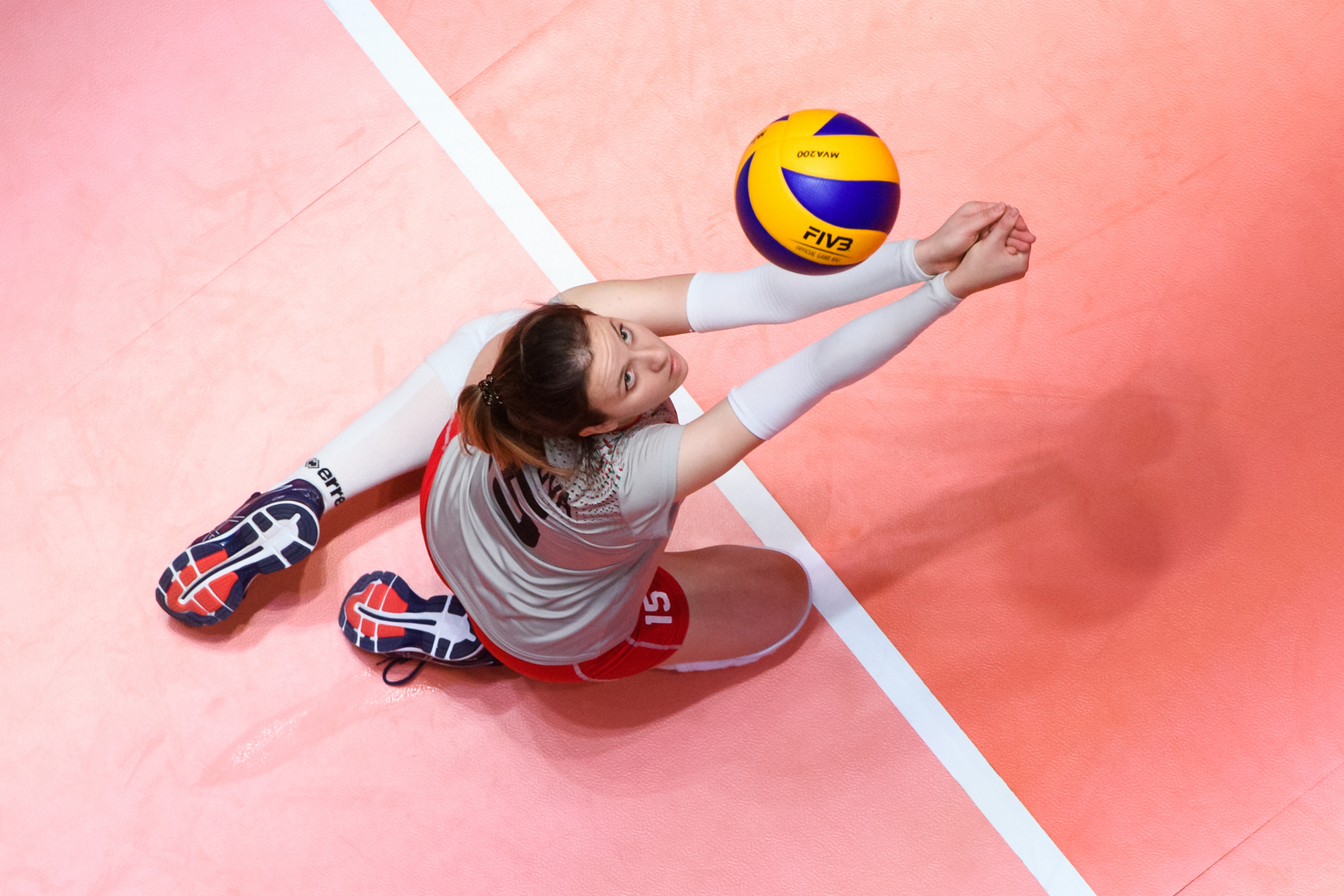 Bulgarian libero Zhana Todorova in defence
What does your coach say to the team?
Zhana Todorova: Every player in the team has already learned that this is our first time in the VNL and we just have to do our best and keep going despite the fact that we have yet to win a match. We are motivated to learn from these much stronger teams, learn from the mistakes we make and learn new things with a high hope that we will come back more experienced and stronger.
What does it take to become a national team libero at such an early age?
Zhana Todorova: I joined the Bulgarian national team some four or five years ago. To wear your national flag on your jersey is the proudest moment in any athlete’s career. I really don’t know what reasons they had to select me, but I think I have some abilities that the team might need, such as speed, agility and defensive skills including digging and receiving. As a libero, sometimes you have to be a leader and motivate the other players on the team. You have to analyze the other side’s players well to anticipate where on your side of the court they will serve or hit the ball.
The credits for winning a match always go to the team’s spikers and setters, but seldom to the liberos. What do you think about this?
Zhana Todorova: I’m not disappointed with that. If I can make a great defence or pass a perfect ball to my teammates, I think that proves that a libero also plays an important role in the team’s success. My best performances in this year’s VNL were against Japan and the Netherlands. Actually, I don’t make much of my current position as the tournament’s best digger... I just need my team to start winning.
What do you think of your experience during the last tournament in Thailand?
Zhana Todorova: Playing in Thailand with a lot of fans cheering on the stands was so amazing and I feel great and excited.
Was this your first time in Bangkok?
Zhana Todorova: Yes, but it’s a pity we did not have much time to look around. One thing I found in this country is that a great number of local spectators came each day to support their team at the stadium and that its people are very nice and friendly.
What are your hobbies outside volleyball?
Zhana Todorova: I prefer to go to the theatre and hike in the mountains. As far as other sports, I like tennis and table tennis.
Related article:
Zhana Todorova: VNL is where we belong
Quick links - Volleyball:FIVB.com - Volleyball Nations LeagueFIVB.com - VolleyballFacebookTwitterInstagram