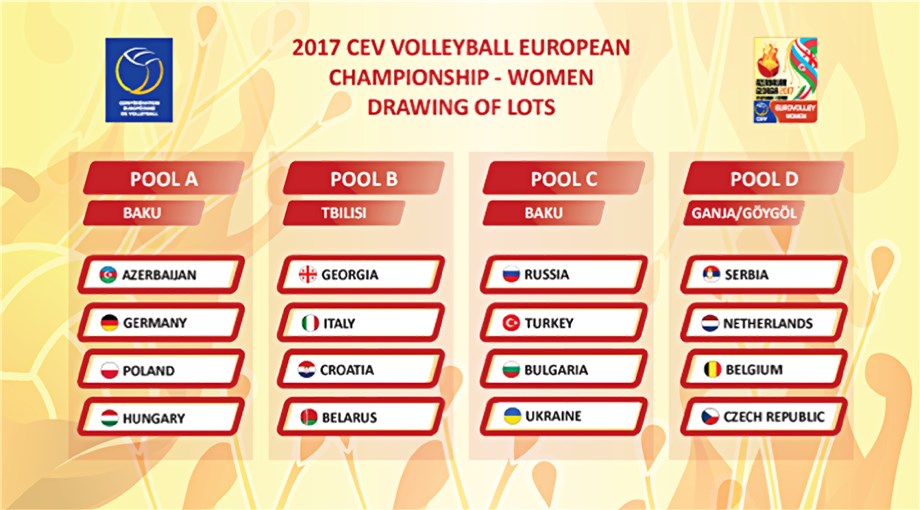 Baku, Azerbaijan, November 24, 2016 - Everything is set for a real volleyball party following the draw ceremony for the Final Round of the 2017 CEV Volleyball European Championship – Women that was held on Thursday at the iconic Heydar Aliyev Centre in Azerbaijan’s capital Baku.

Azerbaijan and Georgia will host a volleyball competition of this calibre for the first time, with the tournament set to commence on September 22 and the new European champions to be crowned on October 1, 2017.

The composition of the four preliminary pools reads as follows:

Hosts Azerbaijan and Georgia were seeded as heads of Pool A and B, respectively; the organisers chose reigning European champions Russia and Rio 2016 Olympic silver medallists Serbia to head Pool C and D, respectively.

The 12 remaining participating teams were drawn by Azerbaijan’s volleyball stars Oksana Kurt (Parkhomenko) and Valeriya Mammadova (Korotenko) across the four pools as per the latest European ranking which was released earlier this summer, making sure that – in accordance with the official competitions regulations – the 2015 gold and silver medallists, Russia and the Netherlands, would not end up in one and the same pool.

The Drawing of Lots ceremony presented by Leyla Aliyeva, one of Azerbaijan’s most famous TV hosts, was attended by some of the highest national authorities of the two host countries, including Azerbaijan’s First Deputy Prime Minister, Yaqub Eyyubov.

Mr Eyyubov reviewed the history of volleyball in Azerbaijan pre- and post the country’s independence, recalling the leading role played by late President Heydar Aliyev in the development of the game in Azerbaijan. “This European Championship is further testament to the trust shown by international sports organisations towards our country which has successfully hosted a number of major events following the vision of Azerbaijan’s Head of State, President Ilham Aliyev. The organisation of this tournament in close cooperation with the CEV and our neighbours from Georgia will yield terrific results for the long-term growth of volleyball in the years to come.”

CEV President Aleksandar Boricic said: “I would like to thank both governments for their support and the two national federations for the great cooperation. Our goal is to deliver a great volleyball event and I am sure that the 2017 women’s EuroVolley will turn into a great success for our sport. I expect a great performance by all participating teams and wish everyone the best of luck and much health to all players.”

A comprehensive match programme will be released in due course following discussion between the CEV, the host countries and the CEV's media partner.