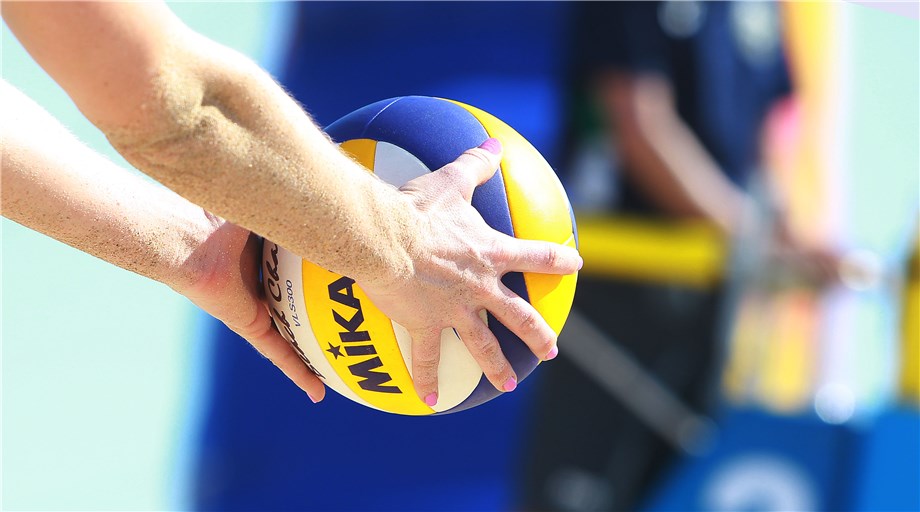 Marrakesh, Morocco, May 4, 2017 – A proposed qualification process for the 2020 Tokyo Olympic Games was discussed by members of the Board of Administration during their two day meeting in Marrakesh.
The system of qualification put forward to board members is designed to enhance the universality of participating teams at the Olympic Games in Tokyo in four years’ time. Under the proposed system, world and international tournaments will provide countries with their first opportunities to secure their places at the Olympic Games, with Continental Championships and world rankings providing the remaining spots.
The qualification process will be confirmed after approval and ratification by the International Olympic Committee (IOC).
Volleyball qualification process
With host country Japan already guaranteed a place in Tokyo, the World Olympic Qualification tournament will provide three countries with their ticket to the Olympic Games. This tournament will comprise 12 teams including the 2018 World Champions, the tournament host country and the top two teams from each of the five confederations. A further three spots will be up for grabs at the International Olympic Qualification tournament, which will be composed the top 12 teams in FIVB World Ranking. The remaining five places will be filled by the winners of the Continental championships.
FIVB Volleyball World Cup will still feature in the FIVB’s 2019 competition schedule although it will no longer provide a qualification spot for the Tokyo 2020 Games. 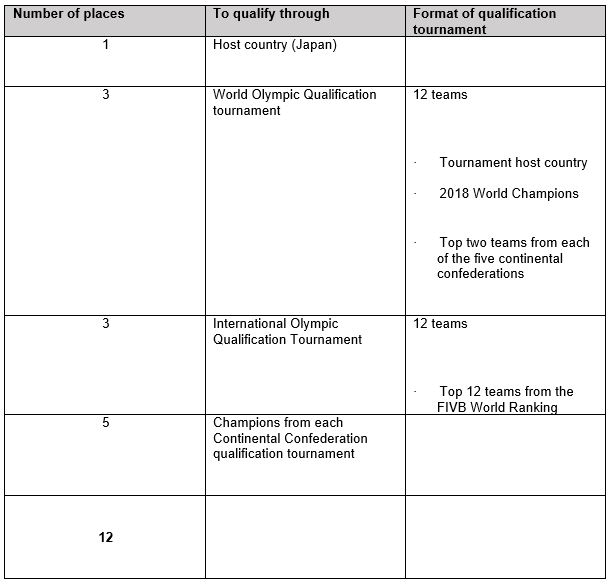 As hosts, Japan are guaranteed one qualification berth per gender.

The World Olympic Qualification tournament will provide two places to the Olympic Games, and the 16 teams participating in this tournament will be based on the World Tour ranking as of December 31, 2018.  One place will be made available to the winning country of the 2019 Beach Volleyball World Championships.

The 15 highest ranked teams on the Olympic Ranking List will each earn one quota place for their national federation to the Tokyo 2020 Olympic Games, with the remaining five places will be given to the national federations that win the Continental Cup Finals. 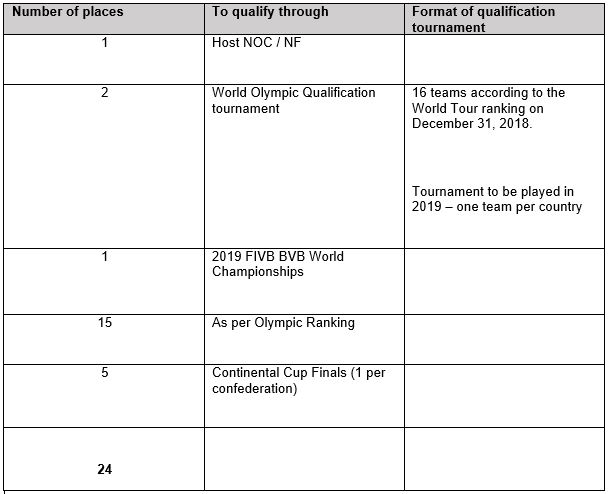 Volleyball and beach volleyball at the 2020 Olympic Games in Tokyo

Tokyo sees the Olympic Games return there after they were first hosted in the Japanese capital in 1964. For volleyball there is special significance and emotion, as it was in Tokyo 1964 that the sport was first officially introduced to the Olympic Programme.

The Games of the XXXII Olympiad will begin on Friday, July 24 with the opening ceremony and wrap up on Sunday, August 9 when the Olympic flame will be extinguished and the Olympic flag handed over to the organisers of the 2024 Games. Both the opening and the closing ceremonies will be held at the Tokyo Olympic Stadium, which is undergoing an extensive facelift for the event.

The men's and women's volleyball tournaments will be held at the to-be-built Ariake Arena, designed for 12,000 spectators, on area reclaimed from the sea. The Ariake area will also host cycling, gymnastics and tennis at Tokyo 2020.