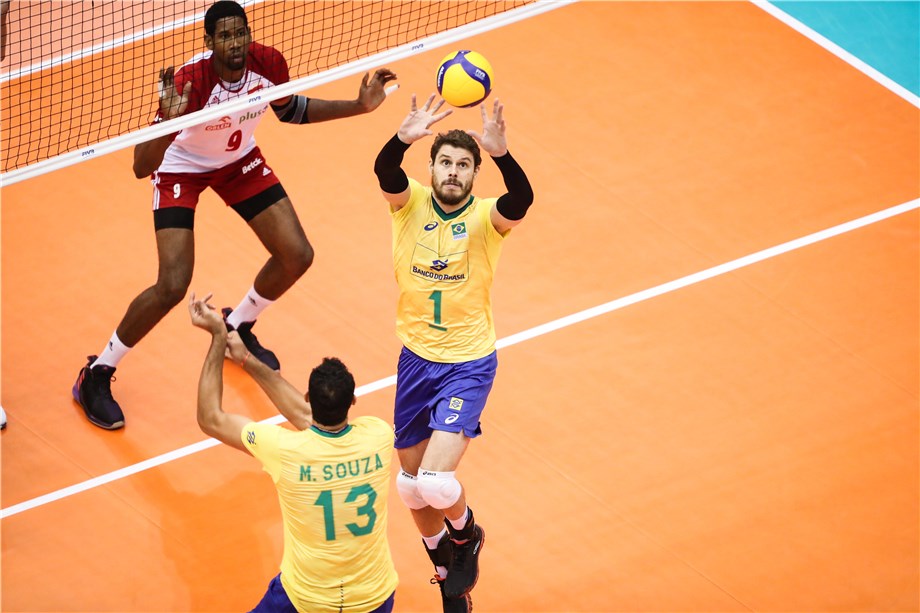 Bruno and Mauricio Souza will be teammates at Taubate next season

Taubate, Brazil, April 24, 2020 – Brazil national team captain Bruno Rezende is back in Brazil and the 33-year-old setter has signed a two-year contract with EMS Taubate Funvic and will play for the team during the 2020-2021 edition of the Brazilian Superliga.
Two weeks ago, Bruno wrote a farewell message to Italian club Cucine Lube Civitanona, where he played for two seasons. At the time, the setter indicated he would return to Brazil, but did not announce his new team.
“I’m very excited about this new challenge in my career,” he commented. “The city of Taubate has embraced volleyball in a fantastic way and I can’t wait to play in front of them. It’s a strong, solid project that has been very successful not only at the national level, but also in South America.”
Bruno already has a storied career in Brazil as he won six Superliga titles and topped the podium in the country with three of the four teams he played for in the league – four times with Cimed and once with Unisul and RJX.
During the last two years with Lube, the Brazilian led the team to major triumphs, including a gold at the 2019 FIVB Volleyball Men’s Club World Championship, when he was the Most Valuable Player and Best Setter, and victories in the European Champions League and the Italian League and Italian Cup.
Related article:
Bruno pens farewell message to Lube Civitanova
In Taubate, he will be coached by former Argentinean setter Javier Weber, who recently signed with the team. He will also meet Brazil’s national team coach Renan Dal Zotto, who is a consultant with the team, and several teammates from Brazil, including middle blockers Lucas Saatkamp and Mauricio Souza, outside hitter Douglas Souza and libero Thales Hoss.
“To be again with so many people who were part of my story and that taught me so much will be great,” he added. “I hope that we can form a strong team and win several tournaments for Taubate.”
Bruno is a Rio 2016 Olympic champion and also collected silver medals at the Beijing 2008 and London 2012 Games. The setter also won the 2010 FIVB Volleyball World Championship, the 2019 FIVB Volleyball World Cup and two editions of the Pan American Games with the Brazilian national team.
More volleyball from Brazil:
Same goal but new plan for Brazil
Weber departs from Club Bolivar to coach Taubate
Brait: "De Gennaro is the best libero in the world"
Brazil's 2019-2020 women's Superliga ended
Quick links:
FIVB.com - Volleyball
Facebook
Twitter
Instagram
Youtube
{{item.Title}}
See All News
This website uses cookies to ensure you get the best experience on our website. For more information please read our Cookies Policy.
Ok