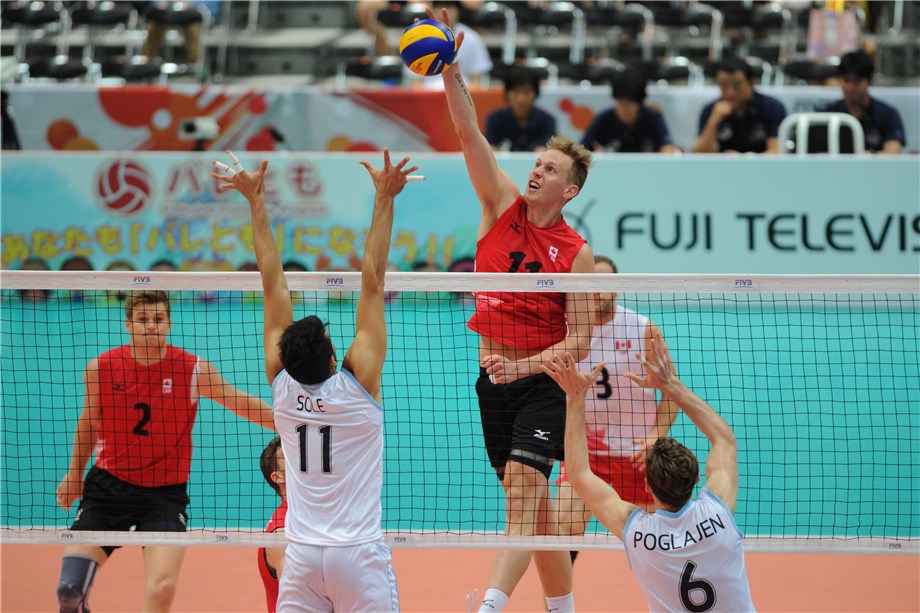 British Columbia, Canada, May 28, 2020 – Ambition is a typical trait of successful volleyball teams and Canada has no shortage of it as the country’s men’s national team aims to compete on an equal footing with the top squads in the world during next year’s Tokyo Olympics.
A Rio 2016 Olympian, middle blocker Daniel Van Doorn is confident the team can improve on its fifth-place finish in Brazil four years ago, when the North Americans returned to the event after a 24-year absence.
“The goal is to medal, for sure,” he said in an interview with Instagram account Volleyball British Columbia. “We'd be disappointed with anything less but we're realistic too. The competition is really tight, but we know we're right there with the best teams. There's no team in the world that we can't beat right now any given day.”
The Canadians, who are part of Pool A in Tokyo alongside Poland, Italy, Japan, Iran and Venezuela, have indeed showed they can compete with any team in the world during the current Olympic cycle, especially in 2017, when they secured the bronze medal at the FIVB World League, their first podium appearance in a major international tournament.
One of the remaining players from the Rio campaign, the 2.07m-tall blocker believes head coach Glenn Hoag now has more options during matches, and that could be an advantage for the team.
“Our team is really deep and I think we're better now than we were in 2016,” the middle blocker, who joined the team in 2015, reflected. “The game also evolved, but we have more players we can use as we did in the qualifier. When we were down 2-0 to Cuba our coach made some changes and the bench player came up big and changed the game for us. That’s not something that would have happened a few years ago. We have more players who are part of the top leagues in the world now and these guys are playing the best players in the world every week. That increases the quality of our team.”
To be in position to contend for a medal, though, the Canadians know they cannot stop working. With the world on a break due to the coronavirus pandemic, the players are not able to practice together, but that doesn’t mean they are not finding ways to get better.
As the players work out at their homes following a programme designed by the national team’s fitness trainers, they also use the time to strengthen their minds and prepare for the challenges they will have ahead of them when competition resumes.
“The goal is to use that time as well as we can physically and mentally, it's more time for us to train and get healthy,” he added. “I believe the postponement of the Olympics can benefit us more than any other team because we have some players returning from injury and they will have more time to recover. We don't know what's going to happen, so for now we're just working out and trying to stay in shape and enjoying some time at home with family. Some of us never had two weeks a year to see their families, so that’s been kind of a positive.”
Van Doorn himself is one of the players who may benefit from the forced break. After playing last season in Belgium for Knack Roeselare the 30-year-old middle-blocker is currently struggling with a hernia.
He will have surgery to fix the issue and will have time to find his way back to the courts as he prepares to help Canada to fight for a medal in Tokyo in the summer of 2021.
“I was supposed to get a minor back operation done, but it has obviously been rescheduled,” Van Doorn explained. “I don't have any pain, but the club doctors don't think I'd be able to make through a full season without surgery. I'm trying to get the surgery done so I can be fully healthy for the Tokyo Olympics, which is the priority. I don't want to have to deal with it before the Olympics or in the middle of the season.”
More volleyball from Canada:
Canadian rising star Vernon-Evans joins Perugia
Canada captain Perrin returns to Russia, joins Ural Ufa
Sanders in an uphill battle to be ready for Tokyo
Perrin: We will head into Tokyo prepared
Canadian UCLA star Daenam Gyimah is also hip-hop artist Kofi
Quick links:
FIVB Volleyball Nations League
Olympic Games Tokyo 2020
Facebook
Twitter
Instagram
Youtube
{{item.Title}}
See All News
This website uses cookies to ensure you get the best experience on our website. For more information please read our Cookies Policy.
Ok