Captain Lazcano says Argentina will be stronger in Tokyo 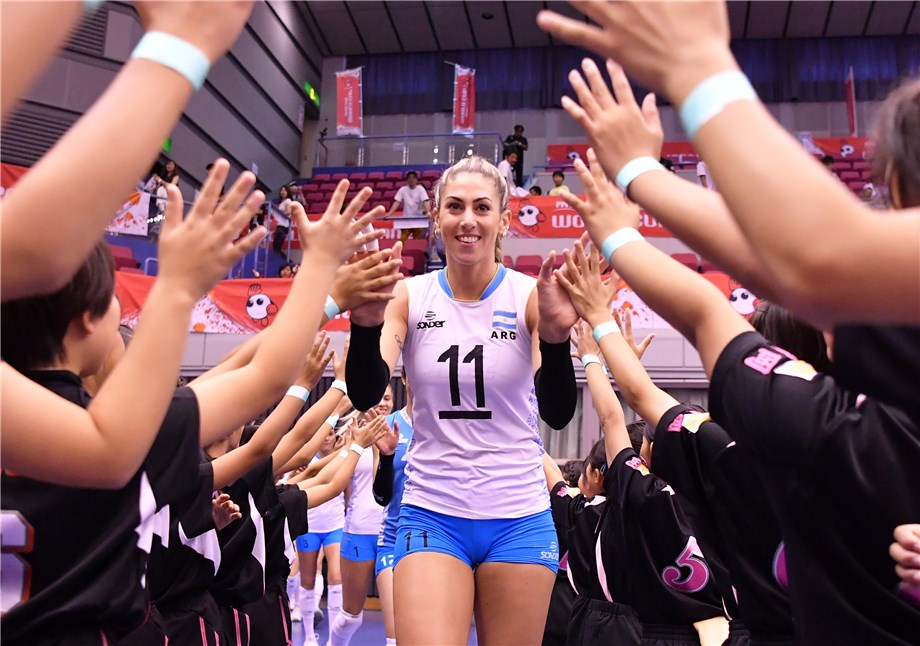 Buenos Aires, Argentina, June 1, 2020 – Julieta Lazcano was already an experienced player when she represented Argentina at the Rio 2016 Olympics. At the age of 27 at the time, she had played professionally in Italy and France and had appeared in some major international tournaments, such as the 2014 FIVB Volleyball World Championships, the 2015 FIVB Volleyball World Cup and the Pan-American Games. But it was still hard for her and her teammates to control their emotions during their time in Brazil.
It was the first time the Argentinean women’s national team, known in their country as ‘Las Panteras’ (The Panthers), took part in the Games and emotions were understandably high when they entered the Maracanazinho arena.
“It was our first time at the Olympics and we were all very excited about that experience,” Lazcano said in a live Instagram interview with Argentinean website Somos Voley. “I remember that when we were entering the court for our first match the arena was completely dark and we were walking in with the sound of a heartbeat. It was like I was floating, I couldn't feel my legs. I had never felt that way and with these memories in mind I can totally understand why it was so hard for us to control our emotions and play at the level we could.”
The Argentineans finished ninth on their first Olympic appearance and won just one of their five matches in the tournament, a five-set thriller against Cameroon. The feeling among the players was that the team, which had showed good progress on the international scene in the seasons leading to the Games - with an eighth-place finish at the 2015 World Cup and a first appearance at the World Championship in 12 years - was not able to reach its best level.
The Panthers will have another chance to show what they can do in 2021 as they have qualified for the Tokyo Olympics and Lazcano, now the team captain, believes their nerves will no longer be a problem.
“Of course we wanted to have performed better in Rio, but we grew as a team and as athletes with that experience and that was the most important thing,” the middle blocker added. “I've heard from several athletes that in your first Olympics you just care about experiencing it and that the second time is when you can really perform. I hope that's the case with us. It's a very unique tournament from an emotional standpoint and I'm sure we'll know how to handle it better in Tokyo.”
Argentina, who qualified after winning the South American Qualifier last January, are in Pool A in the Tokyo Games and will compete with China, Italy, Russia, USA and Turkey for the four quarterfinal spots on offer.
The team, Lazcano believes, are also technically stronger than the one that competed in Rio four years ago as most of the veterans remain with the group and are now helped by a talented crop of younger players, which includes setter Victoria Mayer and middle blocker Bianca Farriol.
“I hope we can surprise a lot of people because I'm sure we have the potential to do so,” Lazcano added. “The younger players who joined our team after the Rio Olympics improved our level as a team and also brought a new energy level to us. The way I see it we can challenge any team in the world right now.”
More volleyball from Argentina:
Agustin Loser continues moving fast on and off the court
Nizetich pleased to be back
French league set for Argentinean influx
Argentina coach Ferraro aiming for top 8
De Cecco set to join Lube Civitanova
Former Argentinean captain Sosa eyeing comeback
Mendez proud of Argentina's past, excited about future
Quick links:
Olympic Games Tokyo 2020FacebookTwitterInstagramYoutube
{{item.Title}}
See All News
This website uses cookies to ensure you get the best experience on our website. For more information please read our Cookies Policy.
Ok