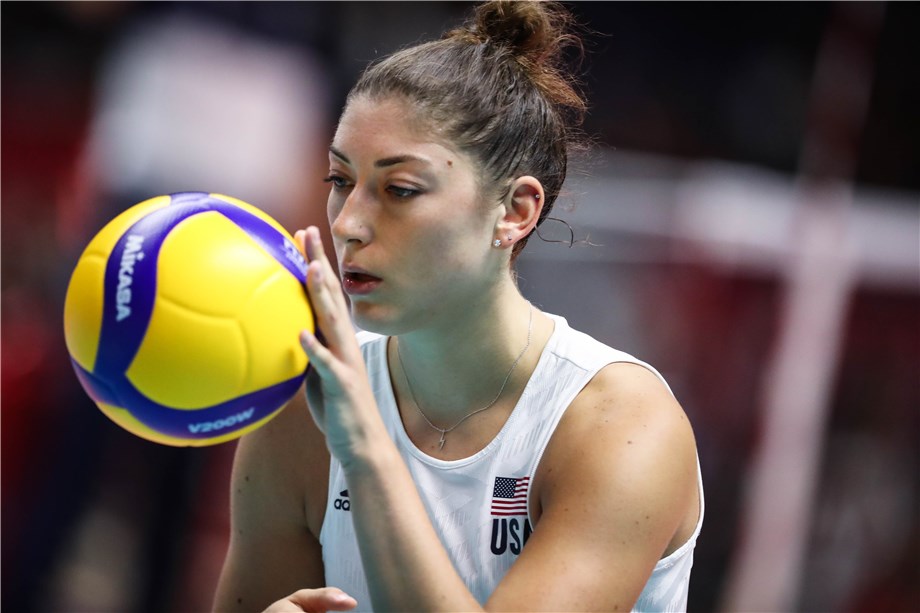 Lausanne, Switzerland, May 27, 2020 – United States setter Lauren Carlini gave us the lowdown on different aspects of volleyball and answered questions from fans in five Facebook Live sessions in April and May. You can watch them all again below.

In the first session she talked about how she got into volleyball after playing a variety of different sports.

“The best thing about volleyball is the fact that you cannot perfect the sport. Even though perfection is something that we are all trying to chase and attain, we’ll never get it. I like that chase of perfection and being able to know that I can get close and work as much as I can,” she said.

“There is something motivating about that. Something about being behind and chasing a goal and chasing that idea of perfection. That and working as a team, whether you’re playing good or bad, you always have people around you who are there to pull you up and support you. That is so powerful and doesn’t only go for volleyball but also goes for other aspects in life.”

Club volleyball and youth development: Advice for young players
Carlini, who is headed to Turkey for the 2020-21 club season, started playing at a young age in Illinois, USA. She said youth development is a key aspect in forging the basics of an athlete and gave younger players five pieces of advice.

“Don’t be afraid of hard work. Embrace those challenging times in those moments because that is where the true growth happens. It builds confidence and character both within yourself and the team you’re playing in. You don’t realise it when you’re in the moment but when you’re playing and just putting in the hard work, you’re instilling values that you’re going to use for the rest of your life, not just with volleyball.

“Be open to change and be mouldable. You have to be coachable and open because if you think you know it all, then you’re not going to get better. So being open to feedback and seeking information is important, being an active learner and a participant in your own betterment.

“Be a great teammate and support those around you because you are all working towards the same goal. That’s the great thing about the sport of volleyball. It’s not only supporting yourself but becoming a bigger cheerleader for your teammates because you cannot succeed without them.

“Focus on the basics first. Get down the footwork, hand movement and arm swing. You have to walk before you can run. Once you get the hang of it, throw in the randomisation and throw in those transferrable skills.

“Don’t get discouraged if you feel like you are failing or plateauing. Sometimes you have to get worse before you can get better, and you have to be open to change in that aspect. You have to be comfortable being uncomfortable. That is where the growth happens, that is where change happens.”

“The biggest difference between club volleyball and college volleyball is that players are bigger, stronger and more experienced. The game is definitely faster. However it wasn’t a hard adjustment because of the hard training.

High performance pipeline and Team USA
She says USA Volleyball’s High Performance Pipeline has helped bridge the gap and has provided an opportunity to a lot of young players who aspire to be in the national team. As one of the best setters in the world right now, Carlini gave young players an inspirational message by encouraging them to pursue their goals in the sport.

“Michael Jordan is the greatest basketball player of all time and he did not make his sophomore high school team. And look at where he is today! When you get told no or when you don’t get an opportunity that you really wanted and really worked for, your answer should be NO. The attitude should be – I’m going to work even harder now so that the next time I am put in a situation, it’s impossible for them to say no to me.”

Professional volleyball
Finally, Carlini talked about playing professionally in Italy and Russia. From being a rookie to a third year pro, she has learned how to be a stronger athlete

“You have to learn to be alone and independent. You have to learn a new language and a new style of volleyball. Being there all by yourself and trying to understand all the aspects of how everything works as a pro is tough, but it strengthened me and made me a stronger player both mentally and emotionally, and I built that armour in that aspect.”