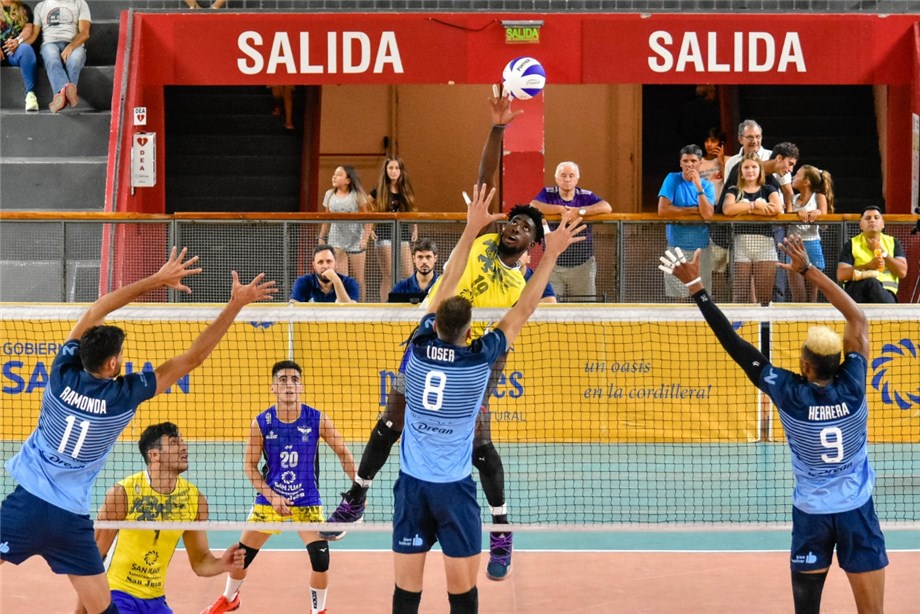 San Juan, Argentina, February 21, 2020 – Club Bolivar’s 15-match winning streak in the 2019-2020 Argentinean Volleyball League came to an end at the hands of UPCN Voley, who were boosted by a spectacular performance by Miguel López to down their rivals 3-1 (23-25, 25-23, 25-21, 25-21) on Thursday evening at the Aldo Cantoni Arena, in San Juan.
The 28-year-old Cuban outside hitter had a tremendous night, leading UPCN’s efforts with 18 points, including 14 in spikes, three in serves and one in blocking.
López has been a regular with the Cuban national team in the last years as he was part of the rosters that competed at the Rio 2016 Olympics and the 2018 FIVB Volleyball World Championships. More recently, he was Cuba’s third best scorer at the FIVB Volleyball Challenger Cup and also appeared in FIVB Tokyo Volleyball Qualification Tournament Pool 5, both in 2019. 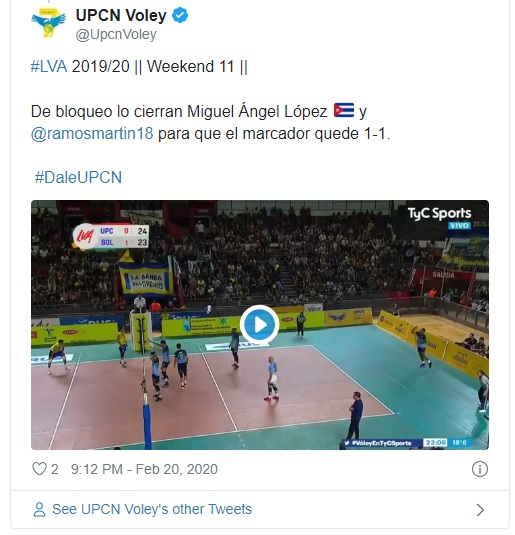 “It was an important result, but we still have a long way to go until we reach our best level,” said outside hitter Alejandro Toro, who scored ten points and was considered the best player of the match. “We have big goals and we’ll need to play at our best to accomplish them.”
The top scorer of the match was another member of the Cuban national team, Club Bolivar’s opposite Jesus Herrera. The 25-year-old left-handed player added 31 points for his side, but his efforts weren’t enough.
The result was the first setback for Club Bolivar in the 2019-2020 national season. The team, who had won all of their first 15 regular season matches, are still at the top of the standings with 43 points. UPCN have 27 so far, with nine wins and seven losses, and rank fifth with four more matches to be played until the start of the playoffs.
Less than a week ago, UPCN had also managed to defeat Club Bolivar in the semifinals of the South American Championship, in Contagem, Brazil, also in four sets. The team went on to take the silver medals, losing to Brazil’s Sada Cruzeiro Vôlei in the final, while Club Bolivar finished fourth.
The derby between UPCN and Club Bolivar is the most heated rivalry of Argentinean men’s volleyball. The two teams have dominated their national league since the 2006-2007 season, winning all 13 editions of the Argentinean League played since then – seven for UPCN and six for the reigning champions Club Bolivar. The two rivals have also won the South American Championship and have appeared at the FIVB Men’s Club World Championship on multiple occasions.
Both teams will return to the court next Saturday, when UPCN host PSM Voley and Club Bolivar play on the road against Obras de San Juan.
Related article:
Unstoppable Club Bolivar still undefeated in Argentinean League
Quick links:
FIVB.com - Volleyball
Facebook
Twitter
Instagram
Youtube
{{item.Title}}
See All News
This website uses cookies to ensure you get the best experience on our website. For more information please read our Cookies Policy.
Ok