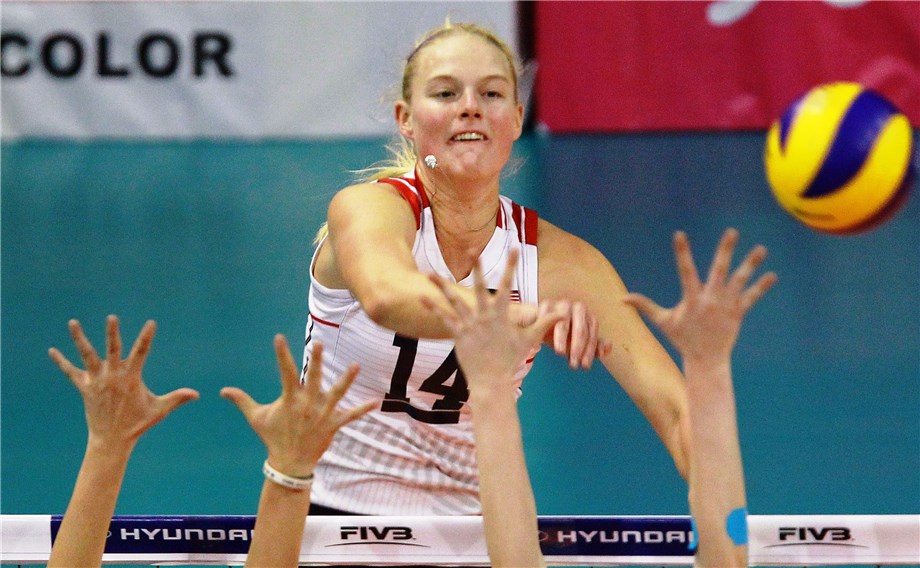 Lausanne, Switzerland, April 10, 2020 – Kathryn Plummer has won FIVB World Championship medals in both indoor and beach volleyball competitions. The 21-year-old is now looking to emulate USA head coach Karch Kiraly, who won Olympic gold in both disciplines as a player, she told Olympic Channel.
The 2.01m-tall California native took gold at the 2014 FIVB Beach Volleyball U17 World Championship, then silver at the 2015 U18 FIVB Volleyball World Championship, and then beach bronze medals at the 2016 U19 and the 2017 U21 Worlds. 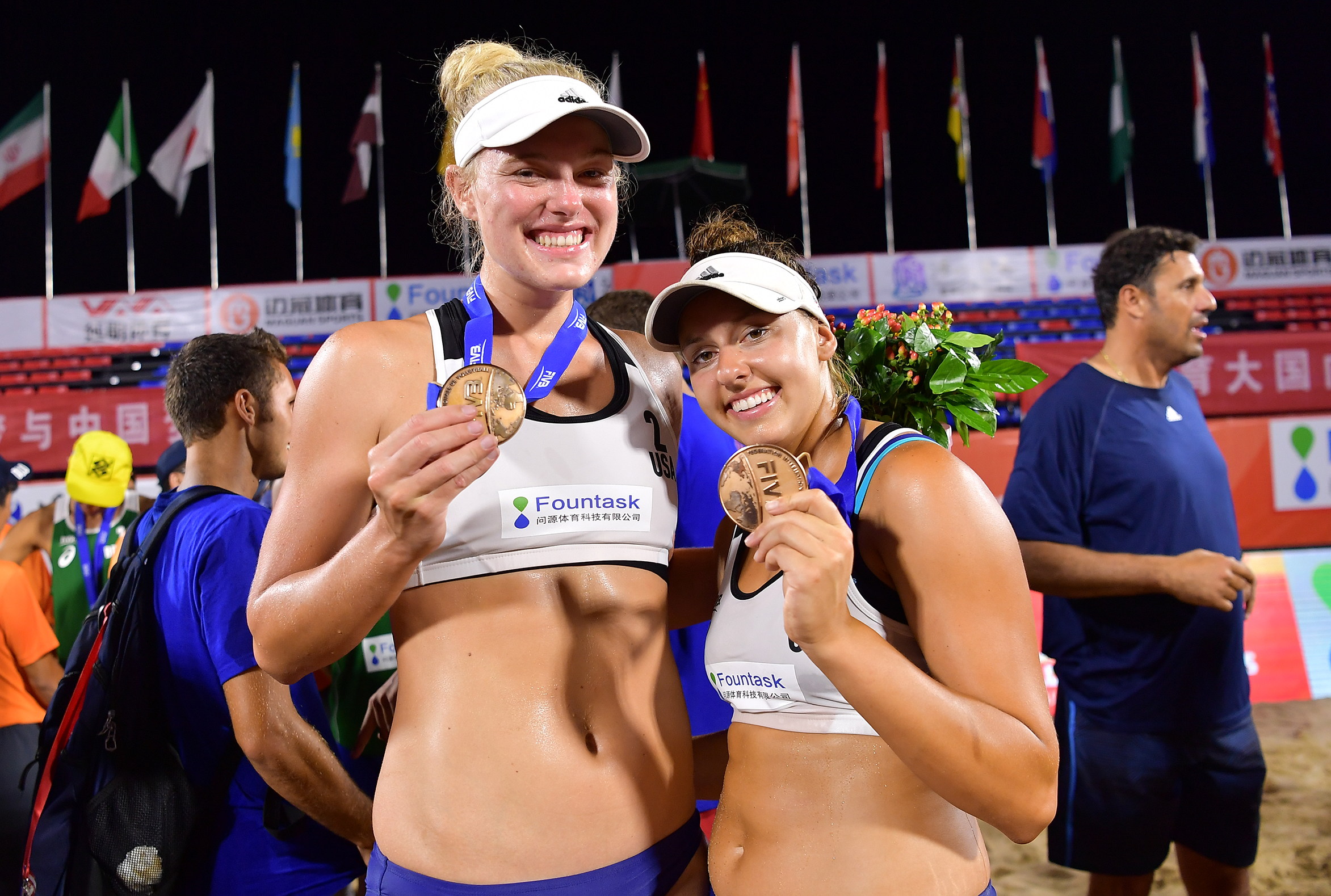 Plummer (left) and partner Milica Mirkovic show off their 2017 U21 Beach Volleyball World Championship bronze in Nanjing
After leading Stanford University to three national collegiate volleyball titles in USA, Plummer joined Italy’s Saugella Monza where she has quickly made her presence felt. Plummer already has experience with the US women’s national team and was part of the squad which won a third straight Pan American Cup last July.
Now the outside hitter is hoping to make the cut for the Tokyo Olympics as she starts her bid to do what no woman has achieved - Olympic medals in both indoor and beach volleyball. Only one man has done it - her volleyball idol Karch Kiraly. 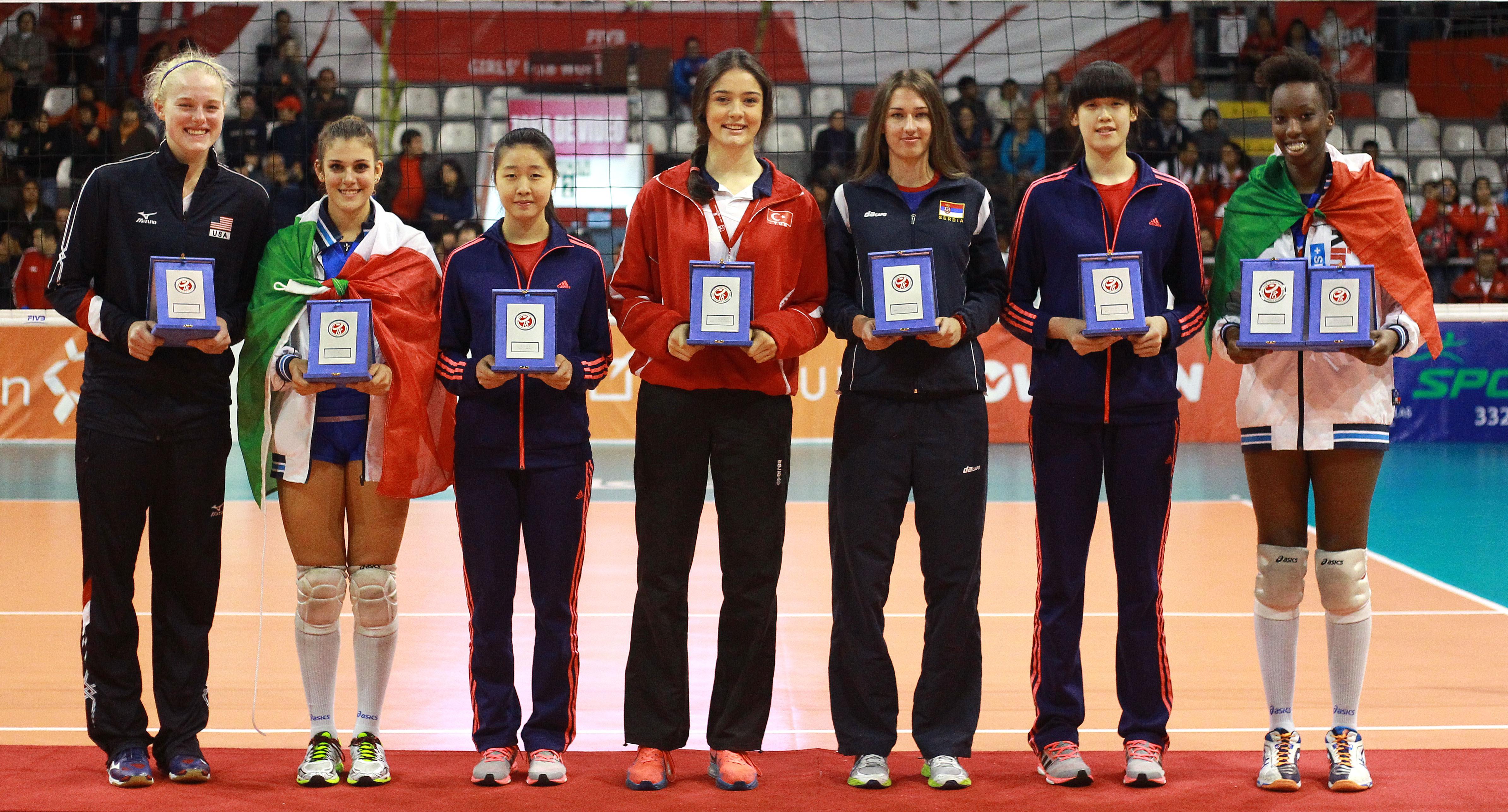 Plummer (far left) - Dream Teamer and silver medallist at the 2015 U18 Volleyball World Championship in Peru
Excerpts from Olympic Channel’s interview of Plummer:
Olympic Channel: How did you fall in love with volleyball?
Kathryn Plummer: I started playing different sports when I was younger - basketball, soccer, softball, baseball. Then my brother started playing volleyball. I just watched him play and he’s been my role model growing up so whatever he was doing I wanted to do. My life became a life out of a volleyball gym for almost 11 years now.
OC: What have been your biggest achievements so far?
KP: The biggest achievement that I treasure for indoor volleyball is going to the Pan American Games last summer. It was just an honour to be able to be with those girls and experience that in an Olympic-style setting. That was a really fun experience and something I will remember for the rest of my life. For beach, I would say winning the bronze in 2017 with Mima Mirkovic at the U21 World Championship. We had won bronze the year before and to win it again was awesome. I think I’m the only person to have won FIVB medals in both indoor and beach volleyball - that's pretty cool!
OC: How do you manage to juggle the two disciplines?
KP: I don’t do that anymore, because I play indoor professionally overseas. But when I was playing indoor and beach at the same time religiously, it was fun for me. Any volleyball that I was playing was just fun. I would be at the beach an hour and a half away from my house and then scramble and drive an hour and a half in traffic to get back for indoor practice. That was my life for six or seven years. I think it was super beneficial in my growth because you learn different things in each discipline and it makes you better in each one.
OC: What are your goals?
KP: My goal is to compete for a spot in the US Olympic team. I’m going to try for Tokyo, and then for Paris, so we’ll see what happens with that. In between playing with the national team, I’m going to play overseas. I just want to keep getting better. That’s always the long-term goal, keep getting better and have a great career, and then eventually stop and have a family. I want to have an indoor career first. After I’m done with indoor, I’m thinking about transitioning to the beach and seeing what I can do there too.
OC: Karch Kiraly won Olympic gold both in indoor (1984, 1988) and beach volleyball (1996). Why do you look up to him?
KP: I admire Karch. He’s a great player, one of the legends of volleyball. And he’s the only person to win gold medals in both indoor and beach volleyball at the Olympics. When I first started volleyball, I said, "I want to do that; I want to be the first woman to do that." So that’s why I started to play indoor and beach volleyball at the same time, trying to balance both of those, because eventually I want to be really successful at both.
OC: What advice has he been giving you?
KP: His advice is just to keep working hard and to dream really big. I have a hat in my room from him; he signed it and it says: ‘Keep dreaming big’. I think those goals that I have are really hard to achieve, but I just keep working hard for them, and trying to achieve them in little increments. I think having those big dreams can come to fruition.
OC: Who are the players that inspired you growing up?
KP: Some of the players that inspired me are Clayton Stanley, Matt Anderson and Ogonna Nnamani. They're great role models to have and they are very approachable which makes it fun because you can ask some questions.
OC: What makes you unique as a player?
KP: I’m very tall, but I think I can do what most tall women can’t do - I can pass, I can play defence, I can set. I started my career and I played all up until college as a setter actually. I think that comes from beach, I just had to learn how to do a lot of things. So that makes me unique in that I can do a lot of different things.
OC: What skills can you transfer from indoor to beach and vice versa?
KP: In beach, you have to learn how to pass at high level, because it’s either you or your partner that's going to get served, so you can’t really hide; and then be able to set your partner how they want it. I think indoor has helped me with beach too. So it’s a very back-and-forth thing where I learned a lot from each discipline.
Full interview on OlympicChannel.com
Quick links:
Olympic Games Tokyo 2020FacebookTwitterInstagramYoutube
{{item.Title}}
See All News
This website uses cookies to ensure you get the best experience on our website. For more information please read our Cookies Policy.
Ok